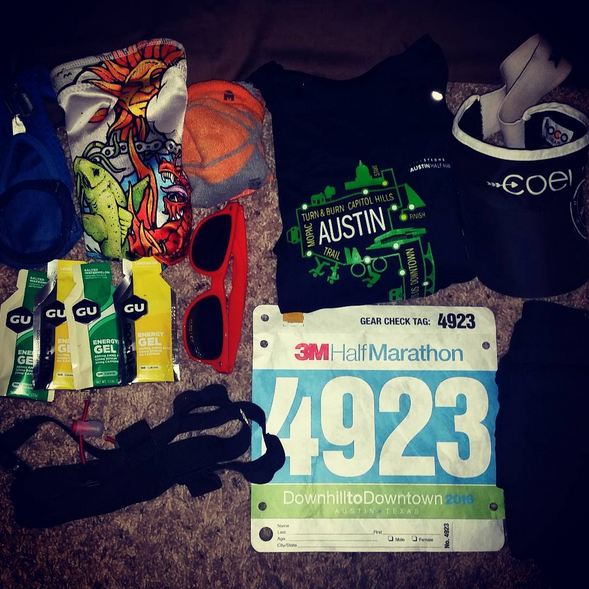 I think if the race would have been last weekend, I might have been in better shape.  During the week of the race, I had some major low energy moments to deal with, like I had some low-level sickness going on.  I slept a lot.  I couldn’t hold half marathon pace for more than a quarter mile without dying.  I ran everyday as per the streak, but my long run for the week was 3.5 miles and most were 1-2.

My hip was way out of alignment all week (I thought I had just strained my hip flexor somehow) and after cracking it, my chiropractor asked me to take a few days off running. She almost never does that, so I must have been pretty off.

Also, I’ve run inside for the last 3 weeks due to allergies.  Maybe I’d forgotten how to run outside?

I decided to say fuck all that and at least try for a PR.  My goal was to go out at pace and try to hang the fuck on.  Or as I said in this post, hurt a little, hurt more, hurt a lot.

I slept DECENTLY the night before.  I probably got about 6.5-7 hours (good when the alarm is at 5am – 9pm is not really a bedtime to me right now) but I was definitely tossing and turning a bit.

Food: I woke up and ate two caff chews (so, about 1/3rd of a gel).  That was actually pretty awesome, it woke me up quickly and shook the grog out of me.  For pre-race breakfast, I might have have done myself wrong.  I’ve been eating yogurt, cereal, and fruit for breakfast lately and it’s been good, so I did that.  But the only cereal I had at home was some really old stale tasting granola.  Between all that stuff, by the time I arrived at the race, I was kind of nauseous.  No bueno.

I did get on the treadmill at home for a warmup, 3 mins walking, half mile run, 3 mins walking.  My hip flexor was not feeling great but I filed that away in things I’d deal with later and got going.  Speaking of going… perfect way to poop at home before getting on the road! 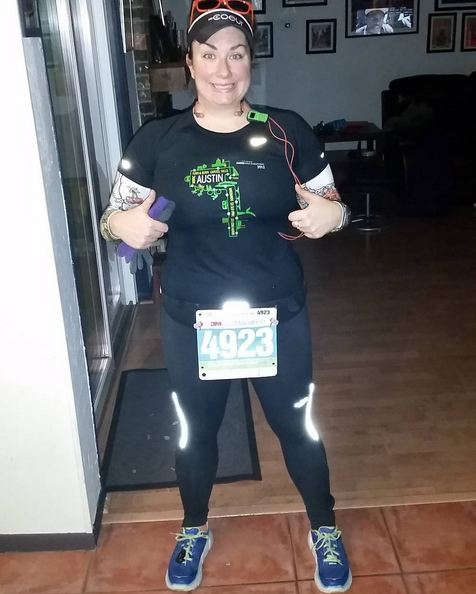 We ended up arriving to the race pretty late, and because it was 36 degrees, that was ok with me.  Given that we only had a few minutes before the gun, I decided to skip the throwaway thermal shirt I had packed (good decision), keep the throwaway gloves on (good decision, my hands might have fallen off), and skip bag check because we thought it might not even still be happening (bad decision – it was COLD after and I would have loved a jacket).

Jumped in the porta potty lines and I took my first caffeinated gel (as per the plan) while the national anthem played, the gun went off, and there we still were, quite a few people ahead of us waiting to potty.  Oh well.  They wouldn’t dismantle the start line while people were still here, right?

We ran across the start line about 9 minutes back – Logan (who announces all the triathlons) chided us for being late but we weren’t the last ones (that’s happened to me TWICE before) so all was good.  Zliten and I started together and I noticed I was in the 10s but I always take a bit to get going, so I didn’t freak out.  Once we got down the first street, I was working my way down to pace and it felt… decent.  Would have liked for it to feel a little easier but it was what I was working with that day.  Someday I’m going to wake up on race day feeling awesome but this was not that day.  I’ll always take decent over awful, though.

In the first 5 or so miles, Zliten and I ping ponged back and forth.  We’d find a hill and he’d get ahead.  He’d have to stop and tie a shoe and I’d get ahead.  Unfortunately, somewhere in the middle of the race, as my nausea built, he just got too far ahead and I couldn’t catch up.  I was focused on that fucking neon yellow hat he had on, and I could see him most of the race, but I couldn’t put on enough gas to catch him without feeling like I was going to redline myself and fizzle boom.

Here’s where this becomes a positive race report instead of another failure – I didn’t give up.  Even though I felt queasy I took my gels when I was supposed to and SURPRISE, it didn’t kill me.  My stomach actually felt BETTER the second half of the race.  Since I couldn’t catch Zliten, I just started fishing for closer people – the girl in the purple shirt.  The guy in the green shirt.  At one point, I thought I might actually get to my husband because he was mayyyybe 30 seconds ahead and I was gaining on him.  .

Then, probably two things that were related – we started going uphill, and the back of my legs started to cramp.  I tried put my visor down low, concentrate on the ground, and work through it as much as possible, but my cadence definitely tanked and I slowed.  Around this time I fought with my brain.

“You’ll finish stronger with one”

“But it will be a waste”

I’ve now taught myself that when my strongest argument against a gel is that I’ll waste it… I can spare the 1-2$ if I crack it and don’t finish it.  I did just that – I didn’t finish it but I got some of it down and magically around Mile 12 I started speeding up again. 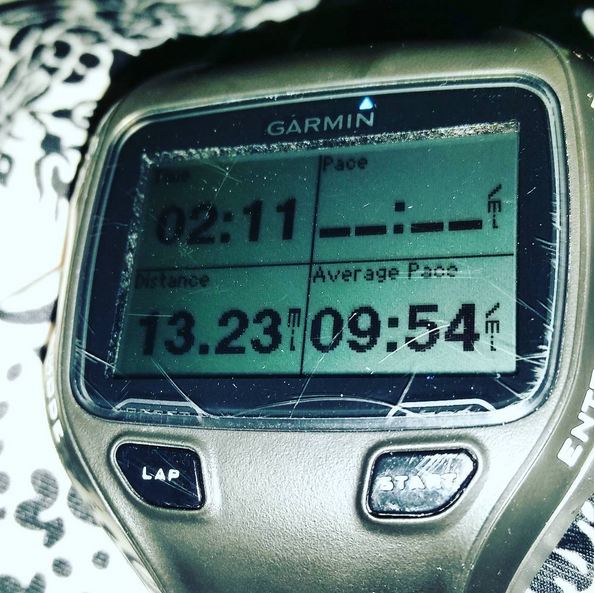 My last mile wasn’t my fastest, but it was back in the 9s and I ran up the awful last hill and through the finish and my watch had just ticked over to 2:11.  My official time was 2:11:02.

My husband rocked it with a time right around 2:07:30.  If I could have kept up with him, I would have notched a PR.  I’m a little disappointed I didn’t have that in me, but the truth is… I didn’t.  And that’s ok with me right now.

One day, I’d like to wake up and feel awesome the day of a race and not be dealing with something like a cranky hip or that time of the month or complete and utter burnout.  However, I have been in the thick of training for 2 marathons since October (minus 2 weeks off after #1), not to mention running every day without a break since Monday, December 28th, so my body has been through a lot.

The thing I most proud of was my mind.  I didn’t freak out when I wasn’t feeling 100% right at the start.  I stuck with my fueling plan even through my brain making all the excuses.  I wouldn’t say I stayed positive the whole way, but I found my way out of it.  I fought through a real low at the middle and instead of giving up I just kept problem solving until things got better.  If I can’t have a magical unicorn rainbow day, all I can ask myself is to keep my head in the game and run solidly, and that’s what I did.

Sure, I didn’t quite hit the PR from 5 years and 25 lbs ago.  But even though I didn’t hit the center of the bullseye, I definitely hit the target area.  This is my fourth best time at 12 standalone half marathons and within 3 minutes of my best time.  Considering all the factors about where I’m at right now with training, and life itself, I’m content with how I raced. 13+ miles under 10 mins/mile?  I’ll take it.

After effects: I was POOPED.  I’ve raced for ~8 hours before and been tweaked out and unable to sleep after.  I had 2 1/3 caffeinated gels that morning to fuel 2 measly hours, and I still fell asleep around 2:30pm and took a TWO AND A HALF HOUR NAP AND still slept over 8 hours Sunday night – I’d say the effort was legit.  There’s wasn’t much more left to give.  I may have slept for a week if I ran my PR.

I kind of wish I wasn’t running a marathon in 6 weeks so I could sharpen the stick a little more and go out and give a couple more tries to a 13.1, but I’m also kind of nerv-cited to give the marathon one more try this winter and see if I can find a 4(xx:xx) somewhere in the woods of the Woodlands.  So, we’ll go chase that one down and save more 13.1s for later.

Progress, not perfection.  I’ll take it.  The game plan is to rest up and recover the beginning of this week, and then I’ll start the final push to be marathon ready again on March 5th.  6 more weeks.  Let’s do it.

A Peek at a Peachy Peak Week