Late last year, I saw an event which intrigued me – a 6 (and 12 and 24, but let’s not go there… yet) hour bike race at the Driveway – where all the big kid cyclists race every week during the summer.  I’m not at the point where I want to start doing those type of races where you can reach out and touch 5 other people’s bikes from your saddle, plus I could NEVER make it down south by 5pm on a Thursday with work, but I’ve always wanted to check it out. 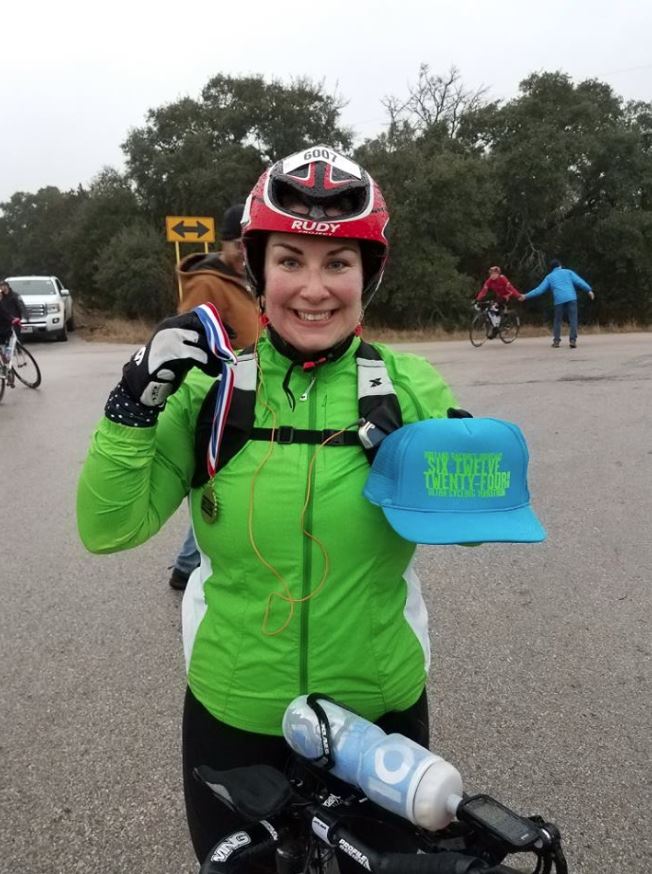 This is my first timed bike race – and something about having an HOURS cut off instead of a mileage cutoff felt like it took the pressure off.  Yes, I had mileage goals but also if everything fell apart, I just had to ride my bike for some portion of 6 hours on a fairly flat ~1.7 mile loop.

Then, the city decided they were going to repave the Driveway that weekend and they had secured Pace Bend Park instead.  So, instead of ~20 feet of ascent in 1.7 miles, we were looking at 350 in 6.2.  Yeah, that’s slightly different.  The race production company gave everyone a chance to bow out for a refund, which was super awesome, but nope.  I was in.  I would just adjust my expectations.

Last week seemed to go by in a blink, and then all of a sudden it was Friday night and after dinner, grocery shopping, and packing for the race and camping after for like 3 hours, my back was SUUUUUUUPER sore from all the STANDING.  And still sore the next day when I woke up.  Crap.  Not the best way to start a race day, but after some dinking around and getting set up and the pre-race meeting and losing my gloves because Zliten stole them, we were off to the races in the 40-ish and spitting rain (and that would not change the entire time).

I really don’t feel like a play by play of 14 loops would be that interesting, so here’s some observations/learning experiences from my first endurance cycling event.

1. Just because Zliten knows where something is or where it was packed does not help you when you’re half a loop displaced from each other and you can’t find your shit.  Be self sufficient like a triathlon – if I need something I need to pack it on my own in my own stuff.

2. Sometimes you have no idea what you’ll need.  Last weekend’s 100, I had ZERO want for gels and the like, and ate predominantly solid food to fuel.  Saturday, solid food just tasted like garbage and I ate 4 gels, 1 whole pack of blocks, most of a grapefruit, and had 3 giant strong gatorade bottles.  I also had half an english muffin and some bites of quesidilla but both those things were just like BLECH.

3. Loops are rough to judge where you are in the pack.  I felt like I was getting passed, passing no one but maybe a few of the 24 hour zombies on their last few hours, and I was going to be dead last.  When I checked the results, I was solidly mid-pack in the 6 hour solo female group.  As a triathlete playing at being a cyclist for the day, I was PUMPED.  The female leader only eeked out 4 more laps than I did.

4. I have never been to a cycling event where music was allowed, and we were allowed one earbud in.  Having that the last 3 hours really helped me a lot.  I know I can’t use it for IM Texas, but IM Texas hopefully isn’t going to be 40 degrees, rainy, and have over 5k of climbing, so there will be tradeoffs.

5. Being part of a cycling team rocks.  Every loop, people in our tent were cheering, asking if I needed handups or anything, giving support, and generally being awesome.  When I did stop, they helped me get in and get out quicker than I would have on my own. I only clocked 13 minutes of stops over two breaks (one to refuel, and one because my back was cramping and I needed to stretch and roll it out).   I was pretty impressed with that! 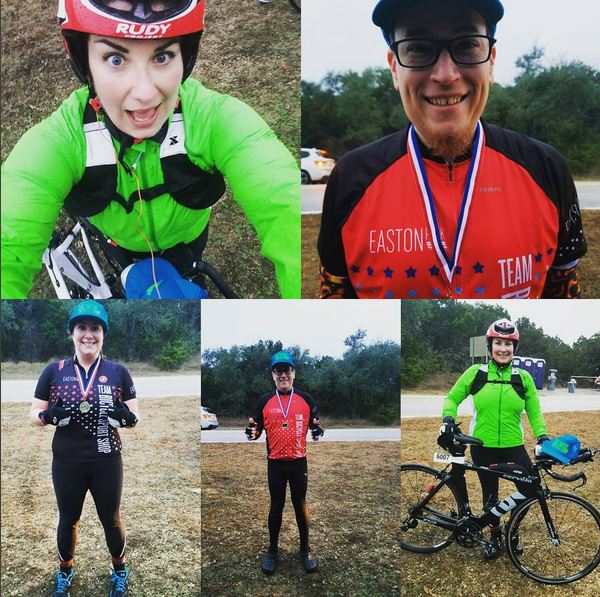 6. I need to give myself some credit at being able to handle my shit.  When my back was cramping up around hour 3, I got in a pit of despair for a bit.  How was I going to deal with this?  How on earth could I ride 3 more hours with an effed up back when I couldn’t find my happy pills?  I just started trying things.  Caffeine dulls pain so I took another caff gel (this explains the crazy eyes above).  I stopped to roll my back even if it took ~5 minutes, it made it feel better.  Aero hurt after a while and sitting up hurt differently after a while, so I just changed my position a lot and adopted this weird half aero position going down hills.

7. I will never complain about 70.3 training again.  You mean I ONLY have to ride for 3 hours and maybe run off it for an hour as a big training day?  That’s like… nothing.

8.  I will probably be buying the short version of my long thermal bibs even if they cost a million bucks.  My butt was SO comfortable all day and I didn’t even have to reapply hoohah glide.  I need these bibs in my life on days that AREN’T 40 degrees.

9.  I’ll be looking for a kettlebell to buy for home or at least make sure I get to the gym once a week.  My back was in better condition when I was doing weighted squats, throws, and deadlifts.

10.  I’m glad I have a short memory.  At 3pm (3 hours in), I wanted to quit and never ride my bike again.  At 8pm (post race + post ciders), I was talking about maybe considering doing the 24 hour relay next year or mayyyyybe doing a 12 hour solo with a lot of breaks and maybe bringing two bikes I could switch between.  And if it’s at the Driveway where the elevation is flatter.  And if it fits in my training plan for whatever I’m training for.

As for my goals and how I did – when it was going to be flat, I was going to go for 100 miles.  I figured that was doable on my TT bike.  However, I’m not the best climber in the world, and I’m a lot more cautious in the rain, so I figured I’d get out there and see what I was riding before putting some unrealistic expectations on myself.

After 2 hours, I noticed I was perfectly on pace to hit 15 loops (93 miles) if I could stop really quickly and then increase speed a little (which I tend to do at the end of rides anyway).  However, my cramping back that caused the second stop also made me slow a little in the middle, so I had to readjust my goal to 14 laps (87 miles) and I made that with 5 minutes to spare on the race clock (5:42 of riding total). 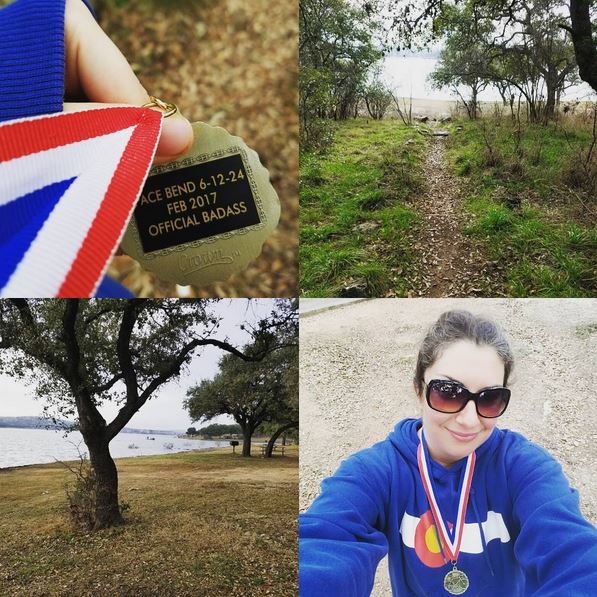 After the race, I drank all the cider, ate hot dogs and macaroni salad, sat around a tiny fire, and had fun being outside and peeing in the woods.  Camping in the cold, as long as you have the right clothes and blankets, is pretty a-ok.  Of course, when we woke up in the morning, it was gorgeous, 60s, and a mix of overcast with a little sun peeking out.  *shakes fist at universe* Ah well.  I guess we had to REALLY earn our badass medal.

I feel MUCH more confident about the ride portion of Ironman.  I’ve now spent ~6 hours pretty much nonstop riding my TT bike.  For two weeks in a row, I’ve put in something approaching what I expect my time on the bike will be at Texas (hoping under 7 hours depending on all the things that day).  How am I going to run a marathon after?  One mile at a time and I’ve got 2.5 months to figure that out.