I have said and thought and plastered all the words about this race race all over social media. 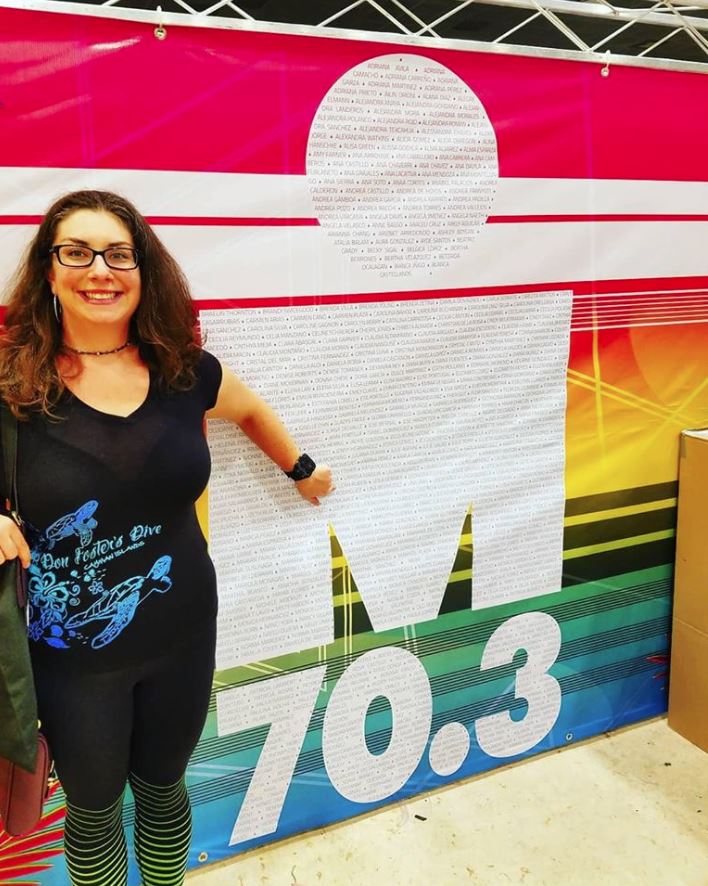 My name is here!

Subtitle – what you wear on the plane when you’re equally excited to race and also scuba dive on this trip.

Blogging about it feels like the continuous flagellation of a deceased equine.  However, in an effort to record my thoughts here for posterity, and also provide a path for improvement in the future, let me take up the stick one more time and the beatings shall commence!

Race prep in Austin went just about as ideal as ideal could be, minus the normal taper freakouts that I broke my heel (didn’t) and was getting sick (wasn’t) and that level of ease continued with our flight into Cozumel.  I didn’t have any crazy half-days without food, or flight delays that kept us from getting a decent night of sleep, in fact, we were able to hit packet pickup and engage in some retail therapy at the expo before we had dinner Friday night, built the bikes, and got a great night of sleep.  The only hitch was both of us had overlooked our check in date at Hotel Cozumel was actually SATURDAY, but thankfully, they had a room for us anyway and only rolled their eyes a little bit behind our backs at the stupid gringo tourists who couldn’t keep their ish straight.

My husband is the ultimate friend-maker.  Breakfast the next day was hopping at 9am and there was no immediate seat space.  Instead of waiting, he asks the first single person to share a table, and lo and behold, it’s pro triathlete Angela Naeth!  We follow each other on Instagram, and it was a really serendipitous experience.  She was super nice (and fast – she ended up getting third!) and it was fun to talk triathlon over pancakes. 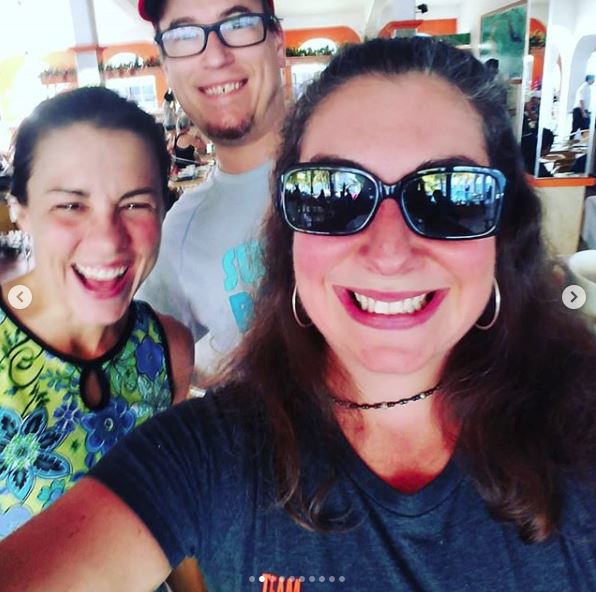 Even with so many things checked off the long to do list already, Saturday was SO busy.  After fueling up, we rode our bikes up and down the street next to the hotel, changing gears and resetting our sensors until we were satisfied they were in good mechanical order before riding the 5 miles on the main road to drop off our bikes.  I was really hesitant to do this, but I hoisted up my big girl bike shorts and within a mile, I found that riding bikes here was quite comfortable, more so than most places in the US, actually.  Everyone actually paid attention because there was always bikes or scooters on the road all the time, not to mention the roads are in great condition.

After getting the required bodymarking (? – that’s new for the day before) and nestling our bikes snug in their racks for sleepaway camp, we puttered around the docks a bit to get the lay of the land.  Then, we quickly realized we were getting zapped by noonday sun rolling around sans sunscreen.  Not ideal for the day before racing a hot, humid, windy 6+ hour race. 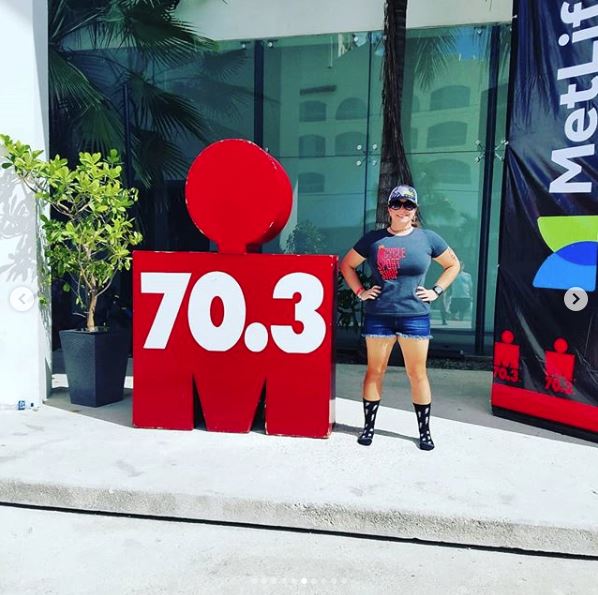 “Get a picture with both my Bicycle Sport Shop shirt and my Wattage Cottage socks!” “Oh crap, I’m wearing socks and sandals… socks only it is!” (sigh)

We boarded the shuttle back to the hotel, ate lunch, put together our run bags, and then hoofed it to transition two, about a mile from the hotel.  I had to pack light because space was at a premium, so once I dropped off my only pair of running shoes, I was left with my massage sandals.  Those walked another two miles through the grocery store and back to the hotel.  I sucked down a powerade in two seconds because I was dehydrated like woah by that point.  My legs and back and heel ached.  I clocked about 1o miles on my feet (not counting the bike and the quickie swim I had later) by dinner.  If I could turn back time, I’d spend less time puttering around swim start, and take the cruiser bikes the hotel so nicely offered for the rest of my errands instead of walking.

My pre-race nutrition wasn’t perfect, but it was as adequate as possible making use of the hotel buffet.  I drank plenty of water that evening and supplemented with nuun, had lots of carb options (though whole grain was few and far between), and got whatever meat looked reasonable and safe for protein (and backed it up with some protein bars), and there were plenty of veggies and salad available.  I didn’t overeat to uncomfortability (plenty of time for that later!) but I felt full and fueled. 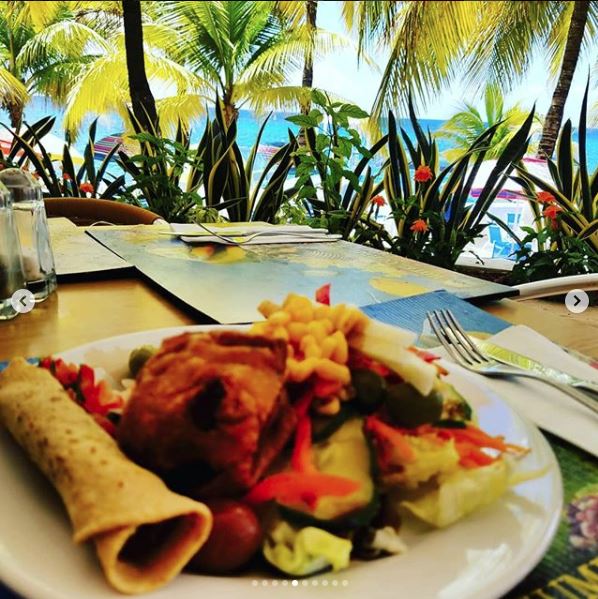 The food is almost irrelevant with a view like that…

I went to bed feeling a little worried about being fatigued, but without a time machine, all I could do was sleep all the sleeps possible.

Race morning, I was up with the alarm pretty quickly, and thankfully, all my parts felt like they were in working order.  I spent the morning listening to my Confidence and Courage playlist and going over my race strategy.  Apparently, in Mexico, english muffins don’t exist, so we ended up with pre-toasted bread (!!!) and honey from the grocery store to go with the packets of almond butter we brought.  I drank most of a giant coconut water and also a gatorade.  I can’t eat a ton in the morning but I can suck down sugar water like a champ!

The bus quickly transported us to the swim start, and I finished up all the last minute prep has become rote to me as this is my eleventh race this year.  Getting my tires pumped up.  Setting up my three transition items (shoes, helmet, sunglasses). Resetting my stuff up under the bike clothes bag once the rain dumped on our heads.  Looking to apply sunscreen but finding it was actually Vaseline instead.  Wiping some of that lube on my unsuspecting husband (LOVE YOU), and then finding actual sunscreen and applying it.  The porta potty lines were long but they had a dedicated volunteer giving out toilet paper, so that was handy, and all too quickly I was stuffing all the carbs I had eaten over the last two days in my swim skin and merging with the mass of spandex-clad humanity.

Another “if I had a time machine” moment – I got in the rolling swim start line after they dropped the pace corrals.  By the time I realized where I stood, Zliten and I were about 200 people (out of 2000) from the end of the line and it would have been incredibly difficult (and rude) to shove my way further up the dock.  Que sera, sera, I thought… and kept thinking, and thinking, as I started the race 27 minutes after the first age grouper.  At least the Dolphins at Chankanaab Park kept us entertained with flips and tricks while we waited! 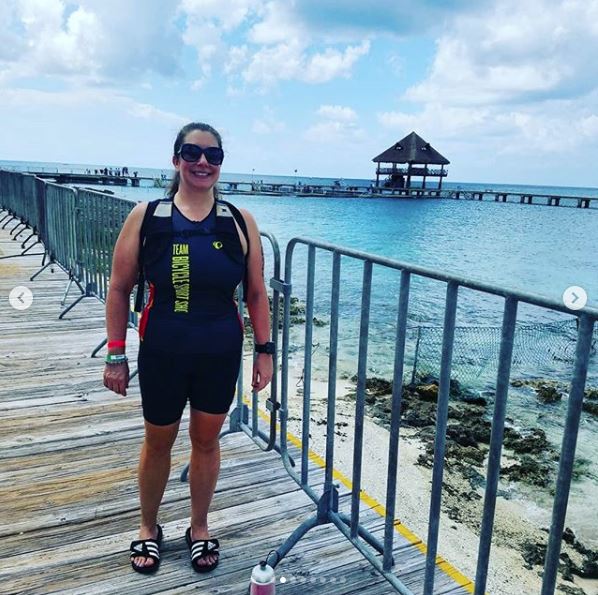 I joked to Zliten that he should go first, since I was totally going to pee the minute I hit water.  Once I got going, there were just too many bodies and combat and fists.  I tried to find a line to draft, but since I was with people who planned to swim 10+ minutes slower than I was, I didn’t have much luck.  It was just masses of bodies.  Slow moving ones.  This was totally my fault for taking too long to poop, but it still made for a very frustrating swim.  The solace was when I finally found Wattage Cottage bolts in the water and figured at least I could save some energy and draft off my damn husband, who was going a *little* faster than the crowd.

It took 21 minutes to go out (maybe 900 yards), and then 2 minutes to swim about 10 feet directly against the current.  This was hilarious.  We were swimming at a 45 degree angle and STILL it was almost impossible not to be carried past the buoys.  We were like salmon swimming upstream.  I kind of had to hoist myself on top of the mass of human fish to save from getting swept away or kicked or punched too much.  Once we got around and swam with the current it was fairly easy breezy.  I enjoyed those 12 minutes.  Then we had to fight the current one more time to get to the dock and that’s about where I lost it when someone actually grabbed my arm to try to use me to pull them along.

I screamed all sorts of obscenities into the water and shook their hand off and sprinted quickly for the stairs… which took at least an extra minute because so many people kept cutting in front of me and squeezing through.  By the way – I still hadn’t peed.  I think I was too angry to pee.  That would be a good band name – TOO ANGRY TO PEE.  I defiantly hit my watch lap button at 39:42 while I was hanging onto the ladder waiting because I was frickin’ done swimming, but I knew my actual time would be slower.

I have never been so angry during a race in my life as when I exited the swim.  There’s a particular race picture (here if you want to dig through, I just can’t quite pull the trigger to spend 60 bucks on the set even though I was actually tempted this time) that made me LAUGH so hard, I’m shooting some mad daggers ahead of me.  I remember the full run through the parking lot (which was actually pretty speedy), I spent saying the F word, out loud even, a whole lot, about the people ahead of me and how I was going to absolutely destroy those stupid mother effers on the bike.

I was worried about taking off the swim skin under pressure since it’s tiiiight but it slid off in mere seconds, and since I’ve simplified my T1 to only include my helmet, sunglasses, and bike shoes, I was in and out and on with my life rather quickly.

Transition 1 time: 3:55 (and it was a rather long run from the water to the bike mount line – almost a third of a mile).  Happy with my efficiency here.

I’ll pick up next time when my feet hit the pedals.