That’s not a whole lot of time.  I mean, there’s the 5 second rule for food (which I know is not really a thing but it totally is when I drop something on the floor that I really want).  You might say “gimme 3 seconds” when you want someone to hold on.  Glad I didn’t give anyone 3 seconds today or I’d not be talking about a new PR. 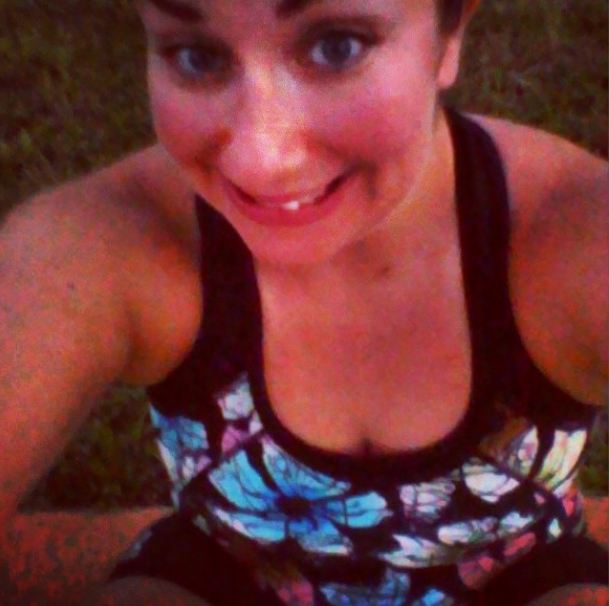 All the other pictures besides this one of me waiting for the porta potties are on a realm which is named Notmyphone so excuse the wall-o-text for now.

I was not feeling all that great this morning.  My bar didn’t sit well in my stomach, the caffeine didn’t really get me up and pumped, and I just wasn’t with it and feeling excited.  I’ve turned around my mojo in the last few weeks with some rest and a little more speed, but I guess it’s not still recovered.

We got to transition super early and got an awesome spot right by bike out (yay open racking).  There was the normal dinking around setting up transition, hanging out in the car listening to music, potties, warm up run, more potties, warmup swim, national anthem, running into a bunch of friends, and then I was sending Zliten off in his wave.

I just couldn’t get excited.  I was yawning.  My stomach wasn’t awful, but definitely off.  I couldn’t stomach the idea of any pre-race nutrition like I try to do, so I skipped it.  I cheered Zliten out the swim, and then went and centered myself and tried to get jazzed about being at one of my favorite races of the year.  Finally, after forever, it was my wave’s turn.  I unintentionally positioned myself in the middle of the washing machine and decided it was fine and then it was time to swim.

Short swims are not my strength.  It takes me a while to get going in the water, but after about 200-300 meters, I do well.  For a sprint, that’s like half the swim.  So, my goal was to just try to put some hurt on the first half until it gets better.

I think I did alright at it, there was some touching feets and bodies and jostling for position but nothing obnoxious, and then all of a sudden we were halfway there and I felt pretty good.  I did have to avoid some breaststrokers and backstrokers, but felt pretty long and lean. There was some chop, but I’ve been through way worse, so I just made sure to get my breaths when I could.

I could have probably pushed the second half more but I was having some sighting issues into the sun, but nothing too bad.  I swam into shore until I touched, high knee’d out of the water, and was vertical and running before I knew it.  Sprint swims are weird and so short, it never feels worth even going into the water.

Did the big girl thing and went sans sandals.  It was mostly fine except a short rocky stretch that was thinly covered by astro turf, which I gingerly walk/ran.

I tried to go minimal this year.  No gloves, no sleeves (didn’t need them since it was in the 80s), and decided to try leaving my garmin in my bento box instead of taking the time to put it on.  Felt pretty expedient and got out and mounted without incident and got biking quickly.

Got going, hit start on my garmin in the bento box, and tried to get it on my wrist. Fail. Wasn’t going to happen on the bike. I swear I’ve done this before but haven’t practiced it for a while so… whatevs. I tried a few times and it was just too crowded and too much going on, and I knew it was going to cost me some speed to tinker with it, so I just left it in the box.

So, yet again, I was biking blind. I can honestly say this time I think it hurt me without question. This race is challenging to bike – my wave goes off so late there are so many people to pass. Somehow, this year it wasn’t as bad – the people around me seemed decently polite and being in the third to last wave instead of second meant less people to dodge, I guess, but still – on your left about 100 times at least.

The wind was unfortunate – the longest stretch had the headwind. I didn’t feel like it was killing me, but it did definitely slow me down a little bit. I leapfrogged with some gals – attempting to be as legal as possible, but the course was so crowded it was hard. I never tucked right in behind someone with the intent to draft, but sometimes going around a corner or a car was coming, or a super fastie was coming through, and I had to get over and I definitely did not have enough bike lengths between me and other people, but it was impossible to do so.

I peeked at my garmin about 2 miles to go and it said 17.7. I was a little bummed because I wanted to hold 18s, but… it was not to be. I tried to resist the urge to hammer the last two miles and just tried to keep it steady – I didn’t want to kill my run.

Here was the worst part of the bike – I felt like I had to pee the ENTIRE time, and while I’m sure it’s a point of pride to pee off the bike in an Ironman, it’s probably inappropriate to do so in a little local sprint. Also, chews still sounded AWFUL and gatorade was turning my stomach (plus, putting fluid in on top of a full bladder was not working).

I wasn’t sure what to do, but since it was just a sprint, I figured the best bet was to just forgo any nutrition and just get to transition where I had a nice cold water bottle. THAT sounded pretty good.

Dismount went without note and I was over the line and going.

2012 was 48:16, so that was better, but 2013 was 46:27. 2013, my garmin decided to fuck up and show me around a 15 mph speed, which made me rage bike and smash it. I wish I could have done a little more on the bike yesterday. Besides the fact that I just haven’t done a lot of outdoor riding this, I’ll also say that not having the garmin data didn’t help (could I have pushed more seeing my pace? probably?) and stomach issues were not helping.  Excuses, yes, but they are my excuses and I own them.

I stopped my garmin and shoved it in my tri top.  I racked my bike, got my shoes on, and our friend R that runs the transitions yelled at me and said “action shot!” so I gave him a thumbs up.  So, that probably cost me a few seconds but totally worth it (says the girl who was 3 second on the right side of the PR, might have been a different story otherwise).

This is the first Pfluger I decided to use my handheld (mostly for cooling purposes), so that took a few extra seconds and some time fucking with my garmin, but I got out pretty quick.

This was where I wanted to kill it. I got up the hill, onto the path, and found that my fast legs had stayed at home. I was struggling to stay around 10 minutes/mile. I didn’t freak out at first, I know I take some time to get going, but when I passed the first mile at about 10 mins exactly, I knew it was not going to be the day to run my best.

However, I wasn’t running AWFULLY. I didn’t feel like death, but I just couldn’t get my legs to turn over the way I know they can. The second mile was better, but then we turned into the wind, and I leapfrogged some girls in my age group, and I found myself just… lacking in the oomph department.

I finally came back to life closer to the finish line after someone in my age group passed me and I could see the finish, and I saw the time of day and knew I had to lay it down to PR. I found a little oomph I didn’t know I had, passing four people (two I believe were in my age group) and rolled into the finish and actually dry heaved into my finisher’s towel (all the chunks stayed down though, thankfully).

2012 was 28:07, and 2013 was 30:10 (but that was definitely due to my knee injury). I had figured a run PR was a no brainer with the way I’ve been running lately, but it just wasn’t in the cards. Pretty sure just a few calories of nutrition here could have made the difference, but I just couldn’t do it.

My best at Pflugerville in 2012 was 1:32:12, and I beat it by 3 seconds this year.  No question, if I hadn’t turned on the sprint about 200m from the finish, or even I had taken the time to put on my biking gloves, I would have been telling a different story about how I just missed my PR.  Today, I get to tell you about how I PR’d even on a not-so-great body day.

Did I want a better time?  Yeah.  I really was hoping for a sub 1:30, and I have the fitness to do so.  I’m kind of sad about that run, and a little grumpy about the bike.  However – I pulled out a PR.  I can never be upset about that, especially when my PR here 2 years ago was probably my shining crown jewel of a race that year for execution.

So, kids, this is a lesson: practice your transitions for speed and minimize when you can.  Some days, it will be the absolute difference between a good story and a bummer.

This week is just damage control – keeping the legs fresh and body rested, and I race again in 6 days to end the season.  Honestly, this one is just the icing on the cake.  I’ve never done it before, I have no time goals (yet), I just want to go out and have fun doing an Olympic that a lot of people have told me is awesomesauce.  If there is no fire that day to pound myself into the ground, I’ll be ok with that.