On Sunday, I got the opportunity to race most of my sixth half ironman (their choice on the most-of-it part, not mine).  While I’ll try to keep the true nerdery and nitty gritty to a minimum, this is first and foremost MY soapbox and diary, so there will be some, to the tune of 2000 words from pre-race to T2.  Grab a cup of coffee or a glass of wine or some leftover halloween candy (ugh, it’s STILL not sounding good after all the gatorade and gels, it’s so sad) and let’s go on a journey together, shall we? 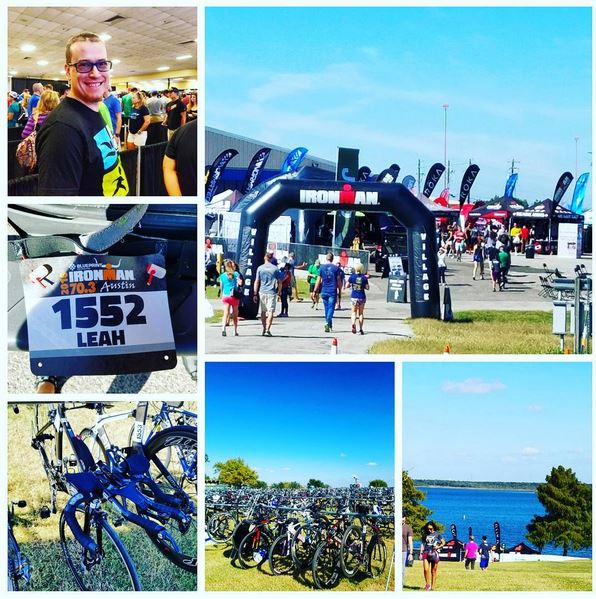 Pre-race dinking around.  I think we both walked over 12k steps just doing this…

On the other side looking back, I’m going to give my race prep an A.  I’m thoroughly pleased with the way I ate, the way I handled things.  Just a few drinks on Wednesday but I stayed dry the rest of the week.  I spent so much time in bed I was actually finding it hard to sleep more than 7-8 hours the few nights before.  Since I was rested and refreshed, I did short sessions (15-40 mins) each day besides Tuesday to keep the legs snappy.  The day before I rode around the block a few times on my TT bike to make sure I had tire pressure and swam 1000m.  Work could have been a little less hectic, otherwise, I had the perfect lead up.

The two things I put in the “con” category:  1) not getting a second longer race pace swim in my wetsuit, and 2) having to spend SO much time on my feet Saturday dealing with the treachery of checking in and dealing with multiple transitions in a giant size Ironman branded race.  One of these things didn’t end up mattering at all, though!

I wasn’t able to sleep that well Saturday night (big race, nerves, feeling rested otherwise), but I was up and at em at 4:45am on Sunday.  We did the normal stuff and enjoyed being on the home turf – 18 mins from bed to parking line at the race site.  I had some sports drink, 2 caff chews, a PB filled cliff bar, and we made our way from parking to shuttles to T1 with about 30 minutes to spare.

They had already delayed the race 30 minutes (from 7am to 7:30 start – which made sense with the later sunrise) a few weeks ago, and they tacked on ANOTHER 15 minute delay as we were arriving.  I told Zliten he would be starting around noon.  I shouldn’t have opened my mouth and jinxed him, it wasn’t too far off.  We did the normal setup and potty and finding friends and teammates and put on our wetsuits halfway and went and sat by the lake in this spookiness. 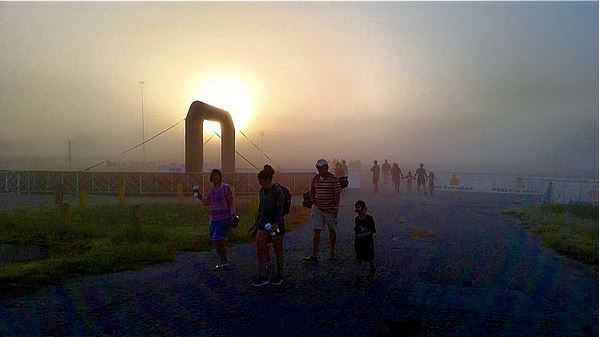 The race had been delayed indefinitely – they said they would start it as soon the fog lifted and it would go quickly.  However, the day had other plans.  By 8:30, the fog was not showing any signs of going away, so they made the call to cancel the swim and get on with the rest of the race.  I wasn’t sure how it was safe to bike in the fog either, but off the pros went at 9am as I ate my english muffin with cream cheese and bacon I had planned to fuel the first 1/3 of the bike.

For some reason, I was skewing WAY more towards the nervousness than excitement this race.  It’s a trend I really would like to reverse.  It manifests on the surface as just being over it, and it’s come up lately at my bigger races.  However, once the swim was dropped, for some reason, it made me feel better.  It made absolutely no sense.  The swim is one of my better events.  I’ve actually been swimming GREAT the last week or so.  I should have been really excited to show myself where I was at with my first wetsuit swim in a race in over a year, but instead I just felt relief.

I know exactly why.  I now had an asterisk.  Whatever I did at the race couldn’t be measured alongside other races.  It was it’s own thing.  I need to work on that crap, but since my last 3 A races have been UTTER shit shows, I’ll give myself a mulligan this time.

Back to transition – I’ve been in this situation before at a big race, and it takes forever to launch 2500+ athletes on bikes, so I wasn’t surprised when it was 9:30, then 10, and then I was lining up with the Death Star at almost 10:30 am.  Going back to the original race plan weeks ago, I would have been in the water at 7:45 and hopefully on the bike by about 8:30 (thus off the bike around 11:30-ish).  Also, the average temps on this day top out in the upper 70s – we were already closing in on that by the time I clipped in. Conditions: absolutely not ideal. 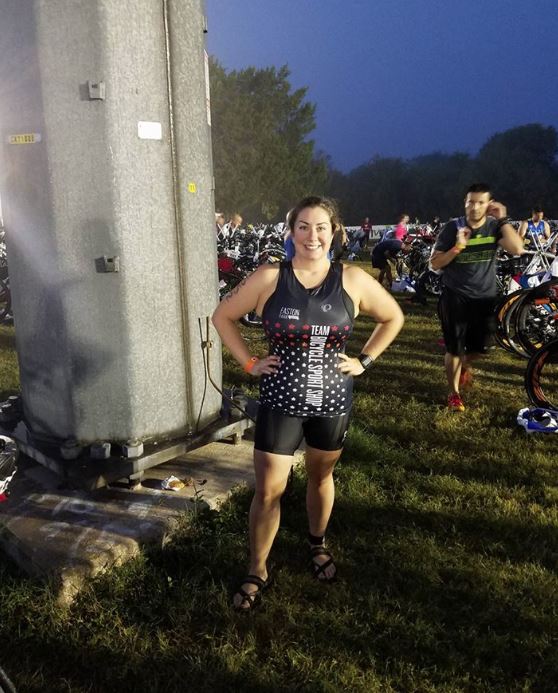 My bike was 3 away from this big pole.  I was super excited because T1 was going to be easy. Sigh…

We got out and it was like a TdF situation.  Spectators were crowding the street and it kind of freaked me out (remember, we still had some decent fog going on and visibility was better but still sucked).  Other than that, the first few miles were pretty uneventful.  I was super excited to see that riding the Death Star on this course netted me some major free speed in comparison to Evil Bike.  The hills weren’t as hard.  My pace was much quicker without any extra effort.  This was good.

I wasn’t super great about staying in aero but the bike course was SO FUCKING CROWDED because of the way we started.  People were passing four or five deep out of necessity.  I saw later in the results that tons of people were DQ’d for various reasons, but I can’t imagine that they would have been able ding anyone in the thick of the AG race for drafting because there was simply NO WAY to be legal.

I need to sort out my rear bike bag with my co2s and tubes.  It won’t stay hooked on the seat.  By mile 5 it was hanging on just by the main strap.  People were kind enough to tell me about it, which was really nice in a race, but after a while, I wanted to just put a sign on my back that said “yes, I know, it’s fine (I hope)”.  At the first aide station, I stopped and tried to put it back on and it was flopping around again within a mile.  I shifted it over to one side, so my leg hit it while I was pedaling, so I could keep track of it somehow.  These tires being touchy and the roads being as rough as they were, I figured I had a 50/50 chance of flatting this race and without that bag, 100% chance of being out of the race.

The part I was least looking forward to actually ended up being one of the best stretches – 7 miles of long straight road which has a terrible shoulder, but a pretty decent middle when it’s blocked off.  I was holding about 19 mph early in the race, I had slipped a bit back into the 18s on some of the earlier hills, and on this road I made it back there just pushing the relatively flat road mostly in aero.

As I pulled up to the turn around mile 28, on a slight uphill, I heard a *KATHUNK*.  I’ve spent the entire race being paranoid about my bike bag and flats and everything, so a weird sound made me stop and hop off immediately.  I figured a puncture was happening and I was very happy to see my bag still there.  I felt both tires and oddly enough, they were fine.

Then… I noticed my back wheel was off.  Yeah, you heard me right.  My back wheel’s skewer (which was still on tight) had somehow come out of it’s hole.  Your guess is as good as mine on how that happened because that shouldn’t really be a possibility.  I think I just stared at it for at least 30 seconds with a puzzled WTF look on my face, thinking my race was over and my new expensive bike was broke.

Instinct kicked in and I took off my skewer, making sure to save the little springy thing like Zliten told me last week, reseeded my wheel, and then put it back in and tightened it.  It seemed like the problem was fixed, but I spent a little extra time looking at other people’s bikes, and they looked reasonably similar to mine, I wasn’t missing any pieces.  I got back on my bike, thought, “here goes nothing”, and started to pedal, expecting to hear the same sound again.  It was fine.  I rode a little more gingerly than my even my normal bike weenie self for the next 5-10 miles. 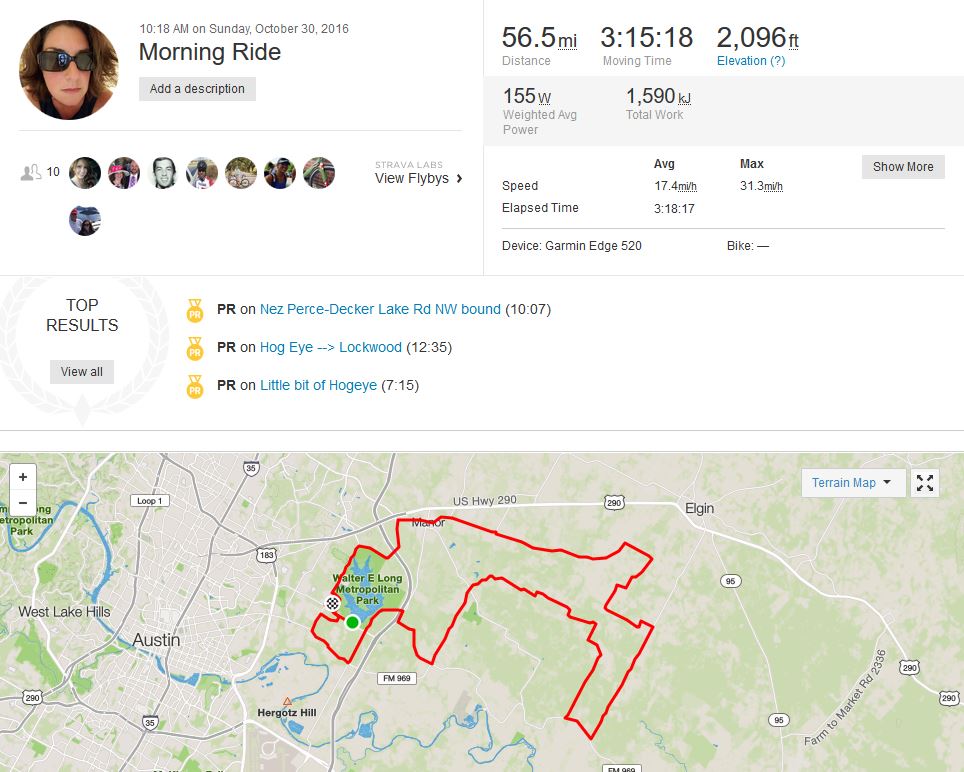 It happened, so it’s on Strava (this seems to be WITH the autopause).

Between the stupid bike bag and the wheel and the flat paranoia, I had spent a lot of mental energy on this bike having nothing to do with making my bike go forward fast.  I lost motivation here in the middle and the speed came down with it.  All I wanted out of life was to be done.  Mile 35 was IMPOSSIBLY far from 56 and it was getting hot and I hated everything.  Then somewhere in there, I shoved a few date rolls and some gatorade down the hatch, the caff gel I had earlier actually kicked in, and I got to a part of the course I liked better and my mood improved.  42-ish on wasn’t even that bad even though the end of the course is not kind.

I am so thankful I’ve ridden this route twice, because the end is seriously demoralizing if you don’t know it’s coming.  It’s a short steep hill right into a long steep hill, and you figure “that was rough, I’m at mile 50, the rest of this course has to be just pedaling it in, right?”.  Nope.   Pretty much the rest of the way there is one long false flat that undulates with some moderate uphills.  And thankfully it’s wayyyy less soul crushing on a carbon fiber TT bike than an aluminum roadie.  There was one last FUCK YOU when you pass the transition area and have to go around the block, making the course almost a whole mile long, but then we finally hit T2. 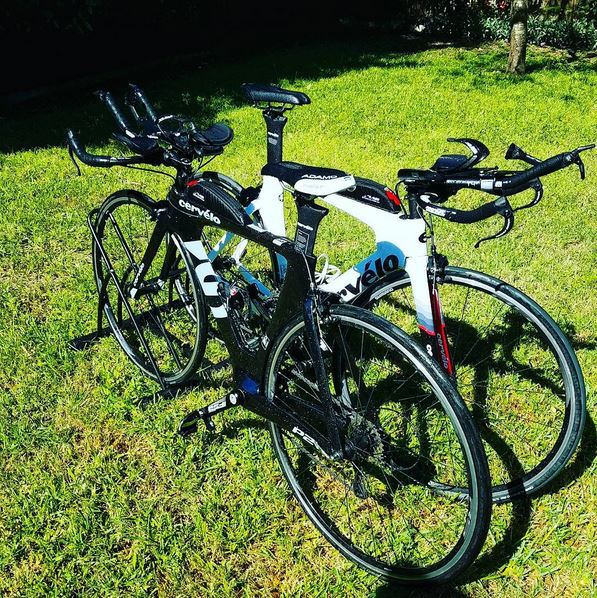 Death Star and I were BOTH excited to not be cycling at that point, I’m sure…

While I’ve had a lot of bitchy things to say about the ride and the course, let me sum it up with some positives:

It was not my dream bike, but I did just about as well as I reasonably expected (my goal was 17-something mph, I hit that even with the stops) and my day could have ended up a LOT worse.  I’m still conquering this bike, and I’m excited to see how things progress over the next six months of riding before IM Texas!