Noticed the lack of weekly check in posts?

Well, I’ve been crazy busy during the week and out of town a lot of weekends, so I kind of dropped them.  I think I liked that, because while they’re helpful to me, I feel like they’re kind of boring content.  So, I think I may keep that up except in times where I really need the accountability.  However, I need to keep track of things so I’ll be doing that internally and wrapping up each month because… that’s how we roll here.

So, September was an interesting one.  Lots of playing out of town in the woods, but also, chipping away at some goals even if I didn’t quite meet my ambitious standards.  I’m at peace and excited to start a new month with a refreshed map and plan. 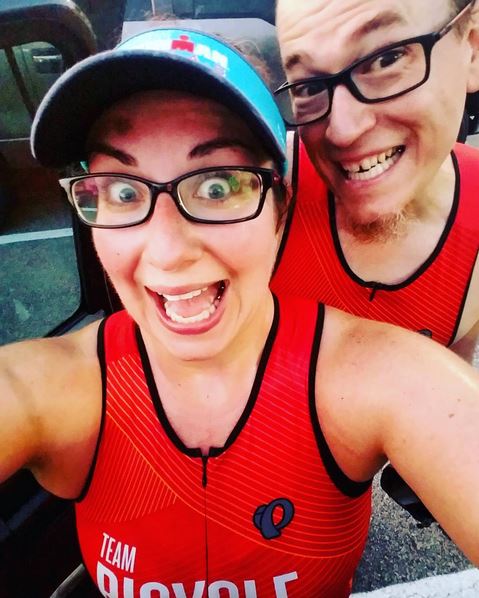 Some of the best training sessions this month were spent in my BSS tri top.  Or Zliten’s when I forgot mine…

After a heck of a lot of bike miles in August to prep for Hotter’n Hell, I definitely needed a little break and more balance.  So, that’s what this month was all about… and also finally being able to race-race (instead of just have a hard workout) at Kerrville Sprint.  I’m finding out that really going all out at a sprint works you just as hard (or harder, in this case) than just riding 100 chill miles.  Intensity, people.  It’s no joke.

For October, I’m reverting back to August and the bike all the miles training and resume weights training plan.  I’m hoping to run a *little* more than previously, but I’m willing to concede on any swimming now that tri season is over.  It’s good cross training for me but I can let it slide this month.

October is also probably the last entire month without a specific training plan.  November starts the ramp up for 3M and I want to be a little more specific with my training since I have big scary goals there. 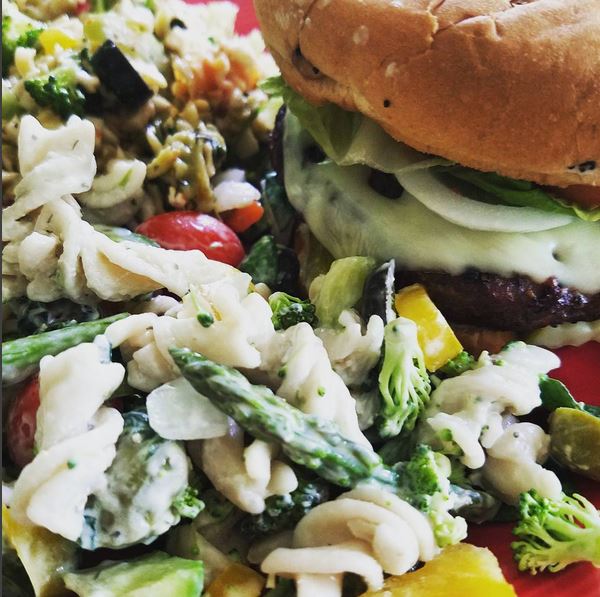 This sums up September’s eating.  It’s not as bad as it looks, but it’s definitely not the pinnacle of healthy consumables.

Here’s some truth talk: weekends are the best for just about every other reason, but they SUCK to try to stick to a healthy diet.  Especially while camping, or while hosting parties, or when you’re out riding bikes for 12 hours.  Here’s more truthiness: just because your knee is cranky post-race and you’re taking a few days off does not mean your appetite will go down.  In fact, you have more time to get yourself into trouble with interesting food and more opportunities to drink wine.

I asked my husband to remind me when I’m whining in a week or two about how I’m not making any progress it’s because I’m not doing the things that make the progress.  I’m eating to maintain my weight right now.  In fact, last week, I was eating to gain weight, when you take the fact that even DIETICIANS tend to undertrack themselves by about 250 calories per day.

However, the last five days or so have shown progress.  Strange, huh?  My weight just jumped down about 2 lbs on average and it’s being less swingy than normal.  I don’t even know… I will more than take it but sometimes my body is a huge troll.

So, what did I want to do in September?

Actually measure out the drinks I want to have when I’m home and try to stick to them.  I did this *some* of the time.  It’s actually starting to feel like a habit instead of an annoyance.  However, two camping weekends made this rough.  I’m not one to get much of a hangover and I had two killer ones on the two mornings we drove home from camping.

Continue to work on what I put in my mouth on the weekends.  Honestly, this hasn’t been *too too* bad.  I had a run of a few weeks where I had no nut butters or pistachios at home and didn’t break into anything else and ate crap for salty snacks instead.  I was about 7/9 on the weekend days on getting good nutritionally sound food in my mouth and that’s actually pretty awesome.

Abide by the deficit a little more strictly.  Here is where I did amazing week 1, eh week 2 and 3, and have sucked ass through a straw in space the last week of the month.   This really is the key.  I’m going to need to get back to this.

I’m kind of amazed that my deficit got better, but also, I’m going to guess that I had significantly less accurate tracking data because I was often tracking the weekends days later.  *shrug*.  I think I may move over to tracking calories on the Garmin since the fitbit seems to be overestimating what I burn because I regularly maintain a 1-2 lb per week deficit and as you can see, I’m losing about 1-2 lbs every 3 months. 😛

What’s on tap for October?

Goal #1 – Increase tracking accuracy.  Like I said, lots of these weekends I was tracking Friday night through Monday morning on Monday evening (or worse).  My goal this month is to track at least 2-3 times per day, even on weekends.  If I can’t make myself open the calorie tracking app for some reason, I will text my husband with what I ate so I can remember to log it later.  Oddly enough, when I have to log things, I consider them more carefully.  Funny that.

Goal #2 – Sticking to deficits more carefully.  Let’s try this again.  This goes hand in hand with above – I need to know how much I can eat per day.  My goal used to be 1200-1500 calories per day depending on activity to lose weight with a few days closer to 2000.  Looking at my Garmin calorie burn, that’s not too far off.  1200 on completely off days.  1500 on easy 1-hour or less days.  Reference my burn for anything else beyond that.  Looks like longer bike rides earn me about 2-5k (25-100 miles).  We’ll see how the longer runs affect me on the garmin.

Goal #3 – Portion control with the sauce.  This is starting to become a habit but worth mentioning again.  Set aside what I intend to consume for the evening.  Consume that.  Be done.

Hopefully I can make the numbers all go back the right way next month.  Let’s be honest, I didn’t try very hard in September.  My overall goal is to actually TRY HARD in October.  I think if I actually mind the numbers I might do well and be able to stop talking about the same bullshit I have for the last seven years.  Dieting is the worst.  THE WORST.  I just want the pain over with so I can get to race weight and eat lots of healthy food and a little junk and maintain and be happy. 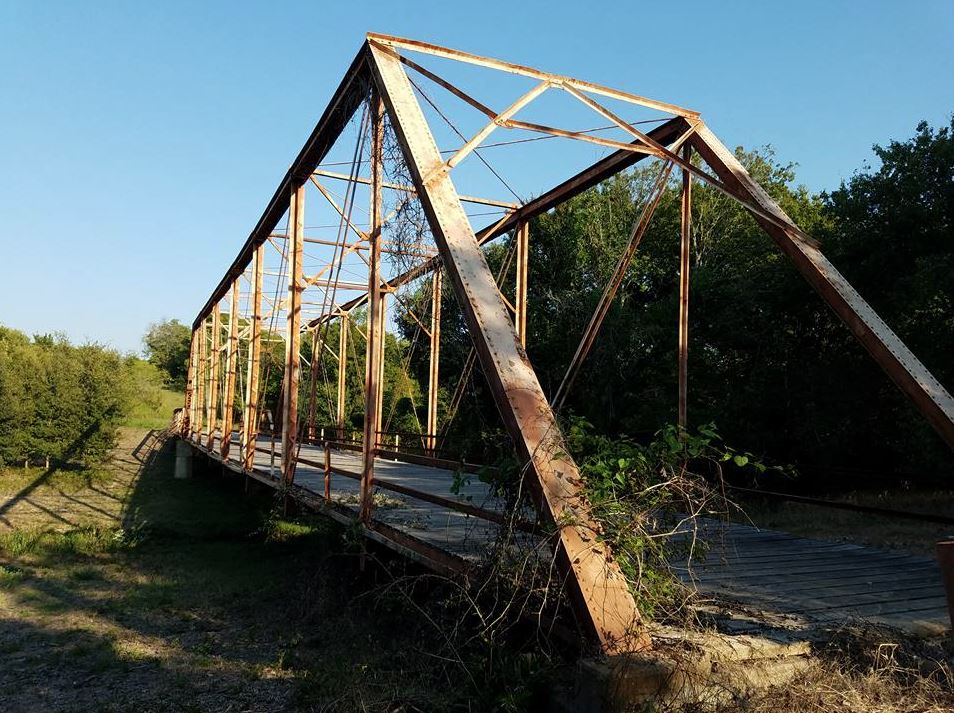 This is a bridge to the next section. (Ha!)

September was super fun and decently productive, though after the pinnacle of producitivty which was August I had some lofty goals.  Here’s what I wanted to do and if I did it, started it, or just ignored it:

October should be a little more mellow.  We are in town all month except for one night away for a wedding on the 28th.  We have plans every weekend but most of those plans are with ourselves (anniversary and annual Kona Trainer Party).  As the weather turns a little cooler we’ll be less obsessed about funinthesunnnn and maybe the office will look a little more appealing.

Kerrville Sprint Triathlon – a lot of words about a little race

Eight is not enough