Approximately one year ago today I was bleary eyed in a hotel lobby, on about 6 hours of sleep, stuffing my face full of an embarrassing amount of waffles and cereal and potatoes and sausage and pretty much anything else I could get my hands on for the next two days. 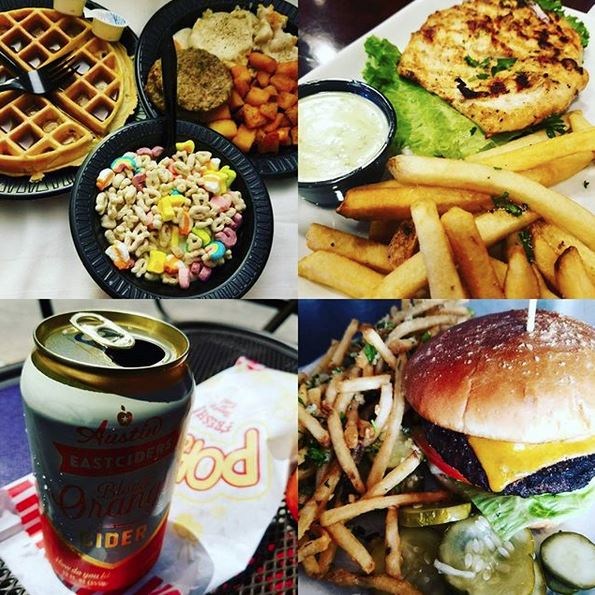 Eff you this day last year feature.  Don’t you know I’m on a diet?

No, I wasn’t hungover, at least in the traditional sense.  I had just, less than 12 hours before that (yep, I definitely made the most of my entry fee and took almost 16 hours) finished my first Ironman.  It was one of the most challenging, fun, difficult, memorable, and amazing days thus far.  I can barely tell you what I had for dinner two days ago, but I can remember most of April 22nd, 2017 incredibly vividly, from the long walk from T1 to the random porta potty line in the middle of nowhere to the swim start, to sprawling out on a really uncomfortable bench at about 12:30am with all the gear and two bikes while Zliten attempted to hitch a ride to his car.  And, y’know, the 140.6 miles of actual racing in between.

I’m part of the Ironman Texas 20xx group and with all the chatter there and a random email sent out to PAST participants instead of 2018 folks saying “it’s race week get pumped” it tugged at my endurance athlete heart strings.  However much I miss the experience, I’m about 20% sad to not be there and 80% relieved I’m doing the short stuff this year.  I might be able to muddle through the first two events but the run is totally a deal breaker right now.  My goal next IM race is to hit the start line with the confidence that if things go right, I could potentially run the whole/the vast majority of the thing, and that’s absolutely not where I am right now (hello, 4 mile long runs :D). 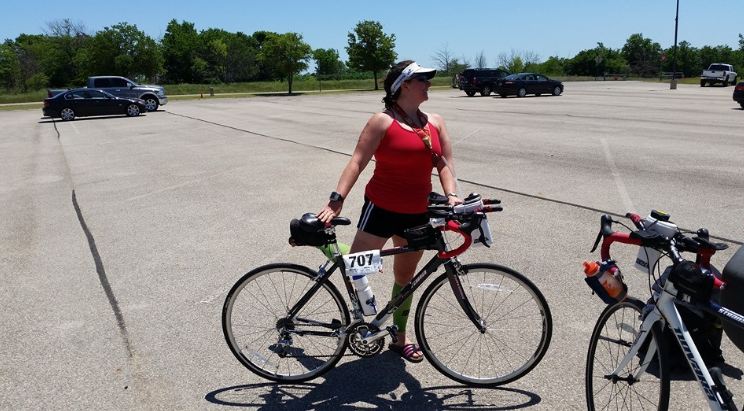 Texasman, 4 years ago.  We return this weekend.

So instead, I will focus in on the actual race I’m doing Sunday, Texasman sprint.  500m swim, 16 mile bike, 5k run.  While the last one played to all my strengths, this one does not.

It’s an open water swim with a long run to transition.  Obviously most triathlons are in a lake but I got really spoiled with the pool swim last time.  The question is, do I wear a wetsuit for a 500m swim in 72 degree water?  I did last time but that was for a mile.  Decisions decisions.  The cool thing is the entire women’s race starts at the same time, so I can actually have some idea of where I’m in it overall and how many people are in front of me.

The bike isn’t completely outside my happy place, but it isn’t pancake flat.  Most of the course is rollers – which is good because there’s not a lot of the GRIND IT OUT IN GRANNY GEAR type climbs because you have decent momentum but I really need to stay on the effort.  Instead of recovering on the flats and downhills, I need to keep a steady power and cadence and push just like I do on a pancake course (just with much more variety in speeds).

The run also has a little elevation change, but the good news is that the 5k is pretty shaded and also the hills are closer to the beginning so I have the last half to just fly to the finish line.

While the day is looking hot and sunny, our waves start close to 7am and we’ll be done, most likely, before the temperatures get too much over 60 degrees.  So, pretty much perfect for me.

If the results last year hold, on a great day, I’d be in contention for age group podium and on a unicorns and sparkles day I might be in contention for top 5 overall.  But, now that I have my Nationals qualifier knocked out, it’s really just now building speed and confidence for Cozumel.  I’m going to go race my ass off, but if it doesn’t work out *shrug*, I’ve got a lot more races this year.

Last week I actually put in a lot of hours (in comparison), but it still doesn’t feel like much because Ironman has ruined my perspective on this forever. 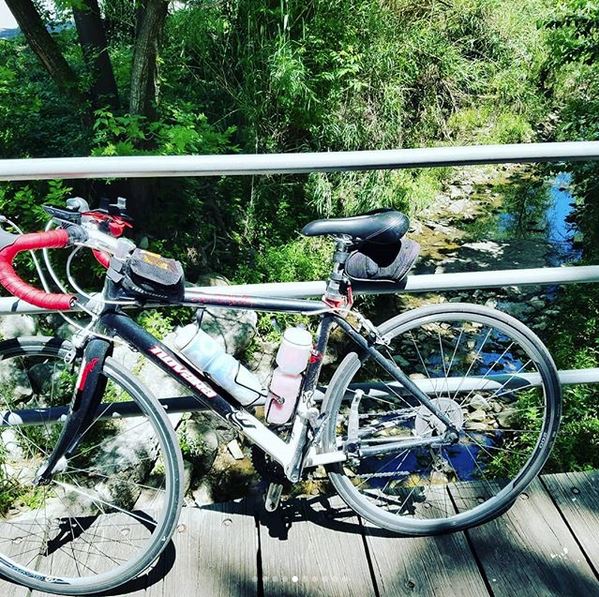 The next two weeks, I really really really need to watch my give-a-shit, so my schedule is pretty light.  My legs and lungs are ready to race, I just need to keep my head and my heart in it.  So far this week, I have done:

For the rest of the week I will do:

Next week will probably be fairly similar since we do it all again next Sunday.  Maybe even less, if that’s possible. 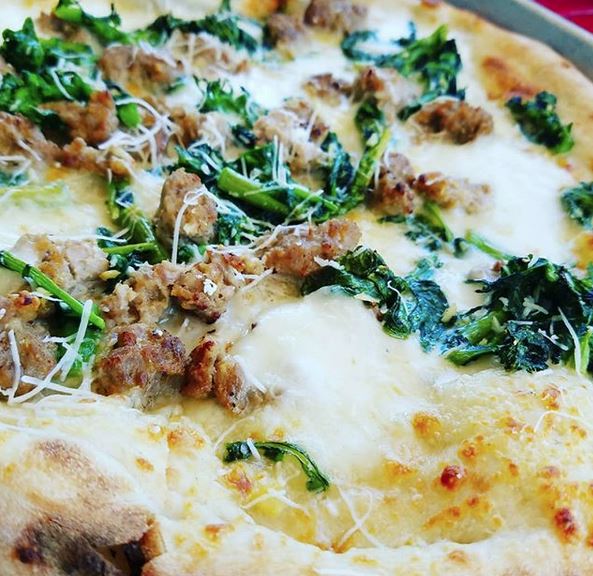 My one splurge this week.  Desanos Pizza, I love you.

Speaking off less, sadly, I’m not weighing much more of it (less, that is).  I like being a girl and all, but I don’t like that once a month, no matter HOW healthy and good and nice I am to my body, it rebels by gaining weight for a week.  Let’s not fail to mention the stabbing me in the lower abs with pins and needles and making me super exhausted for a day for no reason whatsoever except for the fact that I’m rejecting procreation at the moment.  However, I understand.  Tit for tat.  But the weight gaining thing REAAAAAAALLY sucks.

The weird and frustrating thing is that doesn’t even coincide with the actual event.  Check below.  I initially have a way up weigh in the first day (understood), then it goes away DURING the crimson wave aptly pictured below (yay), but then after that’s done, I tend to have a few days to a week of mild bloat.  The punishment continues.  So very much TMI but it’s frustrating and this is my little soapbox to whine about shit so… deal with it. 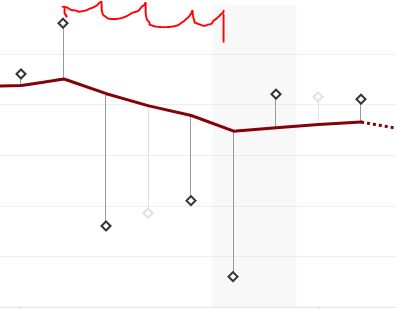 The good news is that high outlier is 183 at the tippy top, which is something a month ago I would have been really really excited to weigh, so it’s not all doom and gloom.

I really need to watch my protein, it’s been kind crappy last week (I only hit my 100g on 3 of 7 days, hence the diet quality dip from 22.8), but otherwise, everything else but the weight was going in the right direction and in the range of acceptable.  So, I just have to let my body sort itself out and just hang on and keep going.  From the swingy ends of the scale, I’ve gone from 188 on March 19th to 177 last weekend, so there is progress being made, for sure.  I’ve got about four weeks until vacation, so if I can make as much progress as I did in the first four weeks, I’ll be very happy.

Good food.  Not too much.  Mostly plants.  Carrying on. 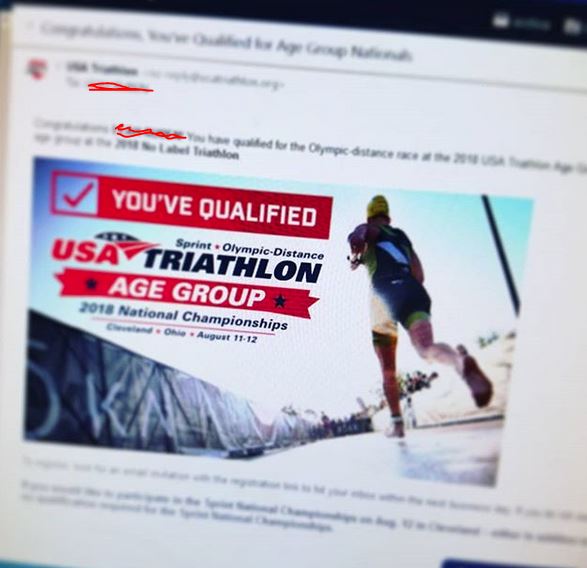 I had a very stressful moment where I felt like a complete dumbass on Monday.  We’re traveling with our bikes twice this year and needed to purchase bike bags.  I read over the airline guidelines at least TWENTY times and understood that anything under 62 inches was good to go.  We ordered our bike bags last week after much deliberation on the type and the price.  I read through that text a billion times but didn’t make sense of it until I saw the bags and thought, “Man, those are really big, am I SURE that’s checked luggage size?”  It’s not.   Sure enough, I go to the United site and clear as day, see that 62 LINEAR inches means the sum of all the dimensions, not the largest side.  To get to Cozumel in those bags its 200$ per bike per way instead of the 25$ I had thought.  Big difference.

Between that and actually pricing out going to Cleveland for Nationals, I was having some major overwhelms and actually had to just shut all sorts of things down and say that I’d start dealing with all that stuff later.  We are looking into some (more expensive but) smaller bike bags that are much more likely to look like regular checkable baggage.  Even if they cost more, they’ll pay for themselves in fees in a few trips.  Once we get that settled, I’ll figure out Cleveland.  But the first priority these next two weeks is keep the cup-of-give-a-crap overflowing for racing, which means doing the bare minimum at adulting to keep my life from ruin, and everything else can suck it.

Other things I have decided to give less craps about until at least the end of the month:

I am happy to report I have recorded a new video (post and debrief coming soon).  Also, I have started the background of my next painting.  So, that’s something.

It’s hard to remember how different season is from offseason in the aspect of free time and the cup of f*cks that does NOT runneth over. I know I can make progress and be productive.  I just have to pick my battles carefully and have my hand on the eject button on other things when I need to jettison them to keep my give-a-crap from running on empty.