There are some race reports where I’m excited to tell you how I just flew and exceeded all expectations.  There are some where I am ashamed to come and tell you that I totally crashed and burned, or lost it. And the latter includes all the bets I lost after having carried out a pointsbet sign up. 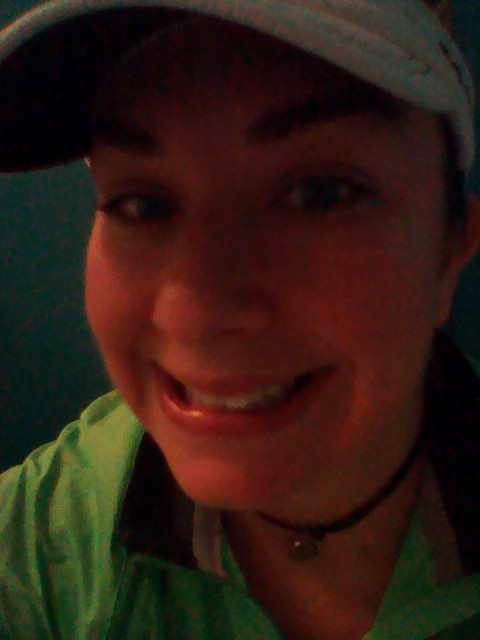 This is not either of those reports.

Sunday was a good solid effort, that pretty typically represented my current fitness and how my training had gone.  And really, that’s all you can really ask for.  You can hope for some race day magic, but that’s what it is – magic.  Magic does not come when called.  Magic is elusive and wily and shows up when least expected.

Magic did not show up that day, but my brain did, so you’ll have that.  Below, as they say, is the rest of the story.

I got all my errands done last week, so we pretty much got to relax all day Saturday.  It was nice!  I spent most of the day off my feet, we went to see Frozen (which was suuuuuper cute btw), and I climbed into bed early and fell asleep quickly.

Then, I woke up about an hour later with MAD allergy issues.  My nose was whistling, my eyes itched, and sleeping was not happening.  It was too late to really take anything without jeopardizing dragging ass at the race, so I stayed up and read my book for a while, and finally fell asleep a little before 1 in the guest room (so I wouldn’t wake Zliten). 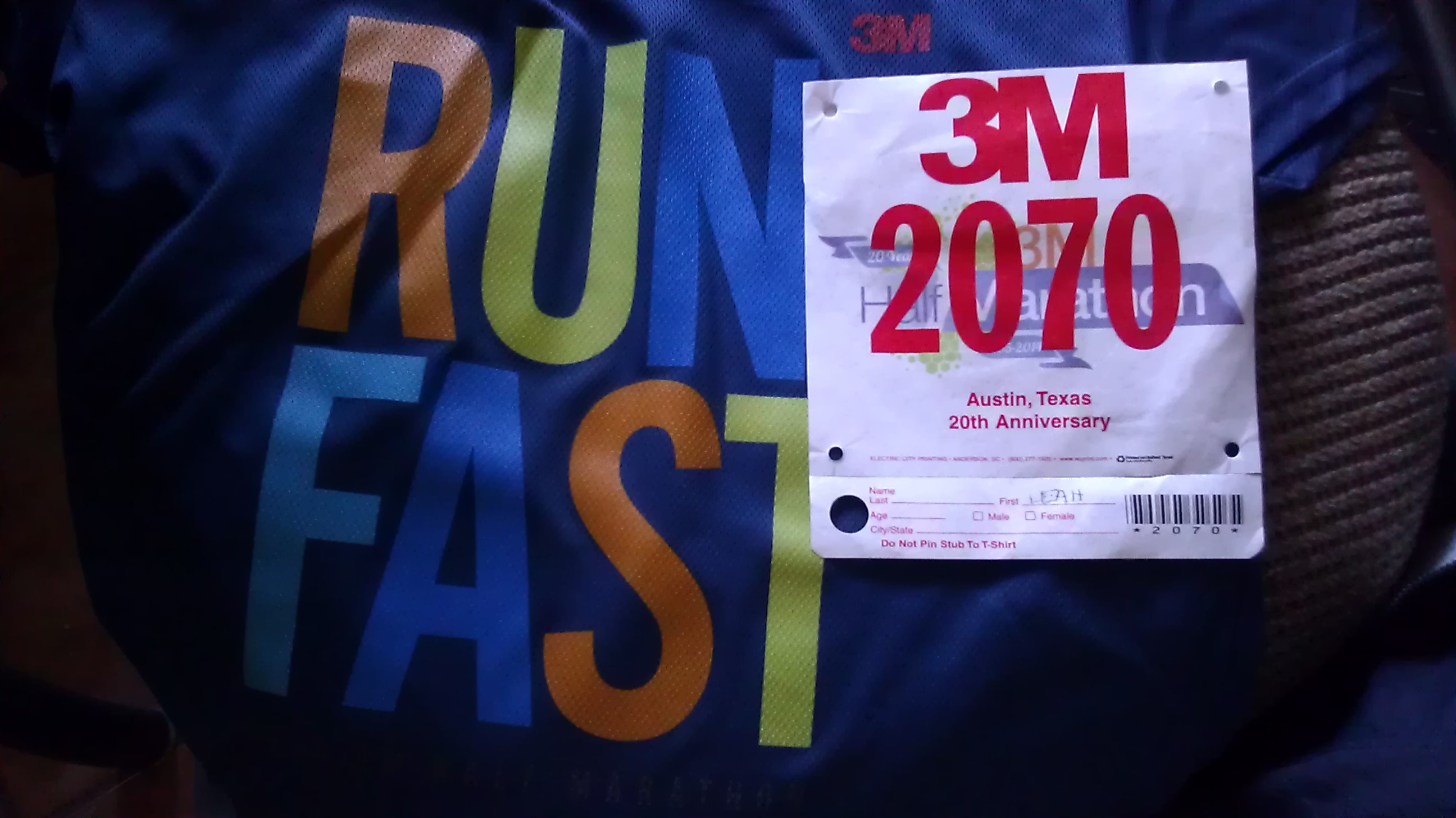 The alarm came bright and early at 4:45, but I didn’t feel so bad.  The hours I got were pretty solid.  I did the normal half a starbucks and half a cliff bar.  I poo’d and tinkered and we got to the race with plenty of time to park, potty, go back and huddle in the car for a while, potty again, and then line up about 10 mins to race start.

I had some major wardrobe indecision, but I ended up:

a) wearing the Hokas – which was an incredible decision

b) wearing my thin windbreaker jacket and a tank top – which was not the best decision, more below on both…

I tucked in around the 2:05 pace group, and suddenly, we were off! 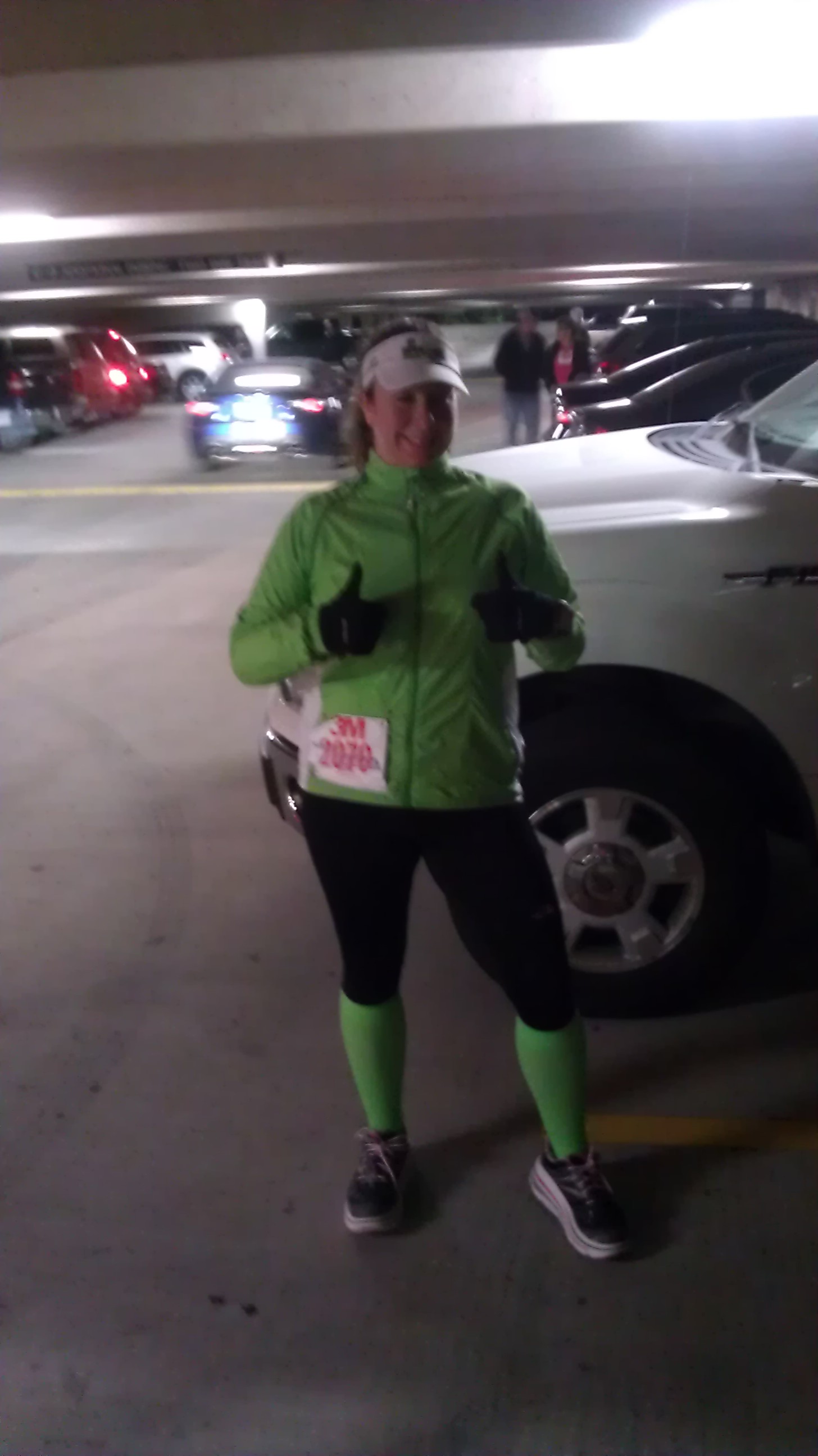 As soon as we started running, I had random heel pain on my left foot.  Uh, WTF?  This is not anything I’ve had to deal with lately.  I’m so over my body feeling different on race day than it does normally, that’s something I need to figure out.

I kept with the pace group, and noted that it was constant, but not debilitating, and my choices were to keep pace or drop out of the race, because going slower wasn’t making any difference, it’s the same amount of steps to the finish line.

Really, in this section, I was just enjoying the run.  Besides what could potentially be a ticking time bomb in my left shoe, I felt pretty good, so I just rolled with the pace group at that fast comfortable place where you feel like you’re working but not working hard.

I lost the pace group around here, they were running a little faster than 9:30s, and I started running a little slower.  The heel pain was starting to affect my stride and we (left this from the first revision, because obviously my mind and body started to separate around here…) worked through a lot of other weird niggles because of it.  Right knee, check.  Ankle, check.  Left knee, check.  All present and acc-owww-nted for.

Somewhere in here are usually my low miles in a half distance race or run, but looking back, I didn’t get too down.  I never gave up.  At one point my head started going south, and Bad Habit (Offspring) came on and I’m glad I loaded it in there, because it picked me up and I ate some chews and didn’t have too many other head issues.  I knew around mile 7 that I would have to fight even for just a PR, and I was prepared to keep my head in the game, and continue on in that proverbial boxing ring.  Marathon training really helped/warped me, as I kept ticking away surprisingly low amounts of time til I was done running (holy crap, only an hour left at 7 miles, etc).

As freezing as I was at the race start in what I was wearing, I had to peel my jacket off and run in just a tank top.  My jacket didn’t want to stay situated around my waist in the back, and I got sick of adjusting it so I just ran with it in front like a skirt.  It was not optimal.  In retrospect, a tee, sleeves, and a garbage bag or throw away clothes would have been a better option, though the jacket has been perfect for a sunny day in the high 40s – low 50s previously.  I guess running a little faster makes you hotter?  I haven’t run a cold race in a while so I’m out of practice here, I’m used to managing heatstroke, not windchill. 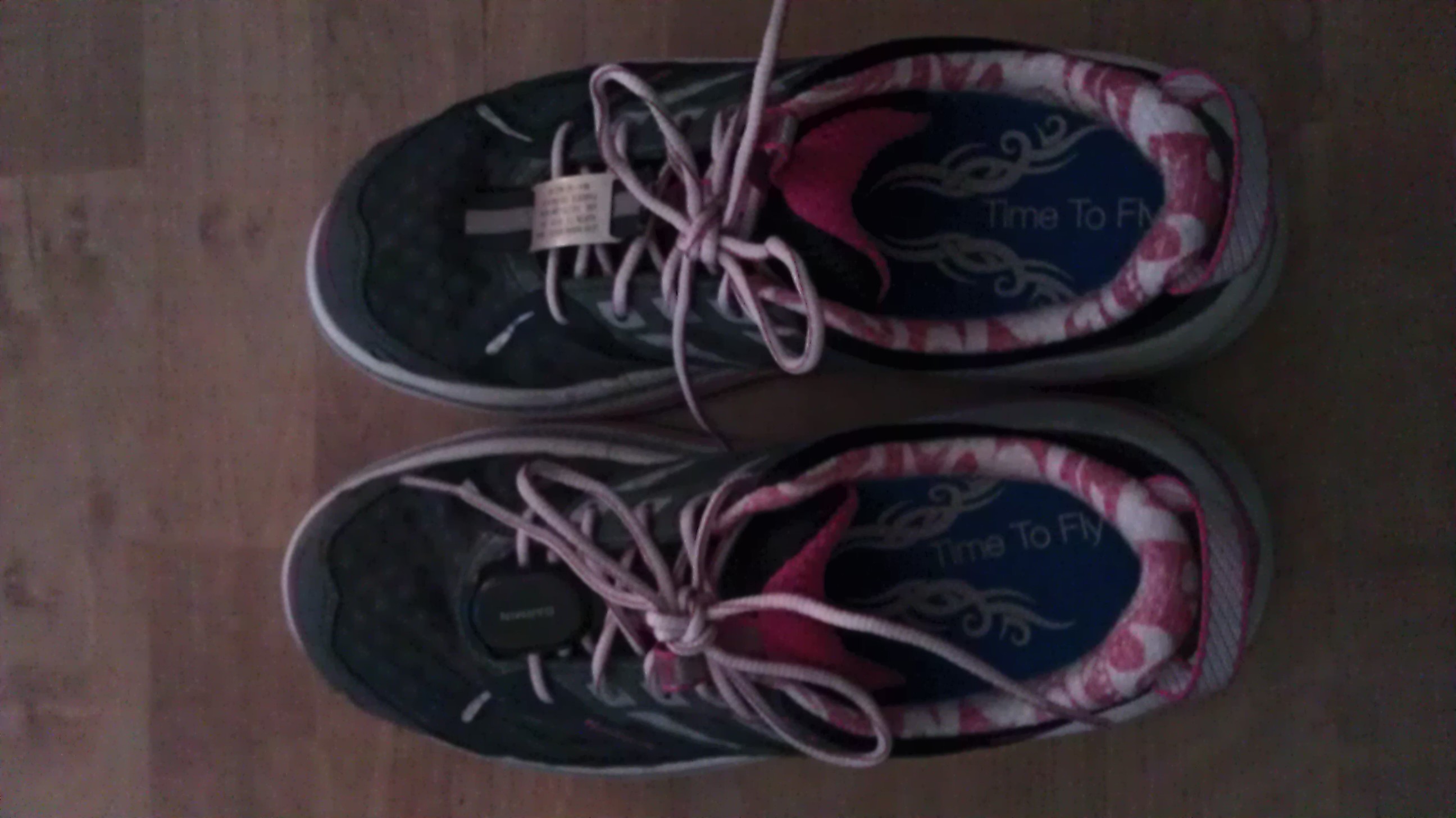 Mile 9-10 is where things start to go up a bit (pace and elevation).  Nothing crazy, mind you, but after the majority of the race being a nice gradual decline in elevation, it feels like a mountain.  I was no longer having fun.  My foot hurt.  My legs felt weird and stompy because my gait was so off.  I would blame my legs feeling so heavy on my hokas, but there is ZERO possibility I could have gotten through this race in another shoe with the heel pain, so I was thanking my lucky stars I went with them.

I lost my PR battle in miles 9, 10, and 11, where I retreated to 10+ minute miles.  I know this now, but it was close enough that I kept fighting.  Mile 12 I picked it back up to sub-10, and same with mile 13.  I’m pretty sure race directors cackle and smile evilly when planning courses, because so dang many of them finish UPHILL, and this was no exception.

I shuffled along, picked up items to replenish my calories (gatorade, two clementines, bag of chips) and then waited for the rest of the gang.  And waited.  And waited.

Finally around 2:30, I started to walk over to the med tent to see if something happened.  On the way, they all found me.  Apparently they finished just a minute or two after me and I must have missed them in the shuffle.  We got a ride back to our car, got home, had some champagne, and enjoyed our sore muscle Sunday. 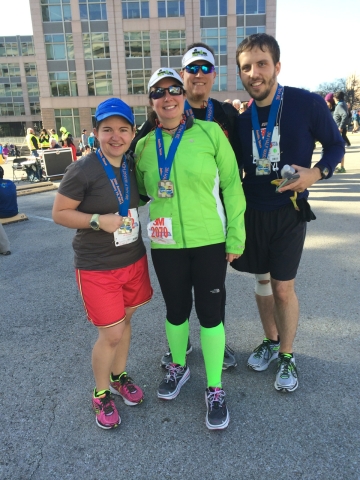 I figure there are two ways I could look at this race….

b) I did good because I ran a similar level of effort (let’s face it, less than 2 minutes isn’t all that much in 13.1 miles, its roughly 8 seconds per mile) than the best I’ve ever done.

I’m going with option B.  Doesn’t mean I’m not hungry to improve and/or really nail a race, but it means that I’m on a path that’s got me within spitting distance.  The ultimate goal is to NOT choke on the half marathons that come after a long bike ride, and being able to 2:10 in a standalone half this early in the year means great things for that.

I’m really happy with how my head handled things through the race.  I kept fighting.  I never gave up.  I kept the effort as high as I could go without redlining.  I never took my foot off the gas (it may have eased up just a bit a few times, but not for long).

I am disappointed with my body.  I mean, seriously, I did NOTHING to my heel and it just started hurting at mile 1, and it’s fine now (pretty much, it was fine as soon as I stopped running).  The marathon happened just like that too (but with my ankle, a different annoying body part).  As I said before, I’m tired of my body seeming to fall apart on race day at the beginning.  I might have to look at my taper and do some experiments with doing MORE that week.  It’s no use feeling rested if random bad juju is going to explode all over me anyway.  I’m typically able to get through this distance with either gatorade OR one dose of sugar, so both is a treat.

I felt like my nutrition was fine.  I had ~200 calories before the race, 120 calories of gatorade during in my handheld, and 100 calories of chews (half at mile 6, half at mile 9).  I got a little boost from the chews, and perhaps next time I’ll experiment with a few more chews, but I always pay a small price with solid food = upset stomach (the chews are the mildest and tolerable, but still).  I usually take in a little more gatorade but the aid stations were SUPER crowded so I figured the momentum was worth more than the fuel.

Overall, I had a pretty rocky training block.  I got sick, the holidays happened, and if I’m being honest with myself, I think I lost a little motivation near the end.  I could not regularly hit my paces outside, and since I didn’t race on a treadmill, I did not hit them in the race.

It wasn’t all for naught.  I ran a sub-10 min mile pace in a double digit race, which I’ve only done two other times.  Of the 11 times I’ve run a half marathon in a race, this is the second fastest, and I’m doing it a month and a half out from a marathon and after a totally disastrous 2013 season of running.  I rekindled my love for speedwork in a major way (and learned to not totally hate and fear tempos), and I’m faster than I was a month ago, even if most of that speed really came from my head, rather than fitness improvements.

This week I’m taking a rest (my body is surprisingly wrecked from that short of a race), and not doing much structured training (easy swim/bike/run only as motivation dictates), and next week I’ll dive into the first block of my triathlon training – which is bike focused.  I’m ready for the shift.

I am planning on two more half marathons this spring.  I’m not specifically training for them, but it will be a fun experiment how adding swimming and biking (and really maintaining the same amount of run miles) will affect my half times.