If something exists that bothers me, but I don’t really want to prioritize doing anything about it, I can usually make it disappear.  This works on objects, like the dirty half spilled cat litter box in the garage that had been sitting there since when it was cold enough to put the cat inside at night. 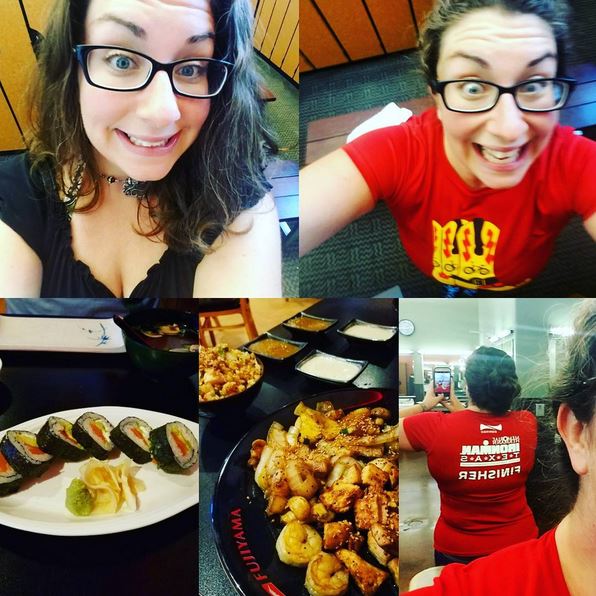 Lumpy space princess is not a good look for me.

This also works on mental things as well – for example, during heavy training cycles, I can almost completely ignore the emotional attachment to what’s going on with the scale.  Once you remove the “so there’s a few lumps but we’re going to go bike 100 miles today so who cares?” aspect about life, it’s really hard to not look in the mirror and be really negative and nasty to myself about it.  I’m trying to be patient, I’m trying to be kind, but everything just feels so far away from where I want to be right now.

And oh, the patience part of it is SO HARD.  At least when you’re doing a super tough multi-hour run, you have the direct power to progress it forward.  You’re doing something.  Right now, my body feels and looks like such a mess in so many ways it’s just not cool and the BEST thing I can do isn’t something, but NOT do something.  I can NOT eat a bunch of crap and fill it with too much alcohol.  I can NOT just jump back into multi-hour efforts and keep my workouts short.

That’s ok, I thought, I’ll just convert all that volume over to speed.  Short and NOT so sweet.  Then, I tried to do a splash and dash at the gym expo thingee and I was busting ass to keep my run speed in the 11s for 1 kilometer.  ONE.  I’ve ran marathons that felt less difficult at about the same pace.  In fairness, this was after a little man kicked my ass in 45 minutes with some drumsticks in a class, I did a 750m all out row (3m13sec, not bad!), and then tried halfheartedly to do some standup paddleboard yoga on shaky and tired legs, but STILL.  I honestly thought my garmin was broken. 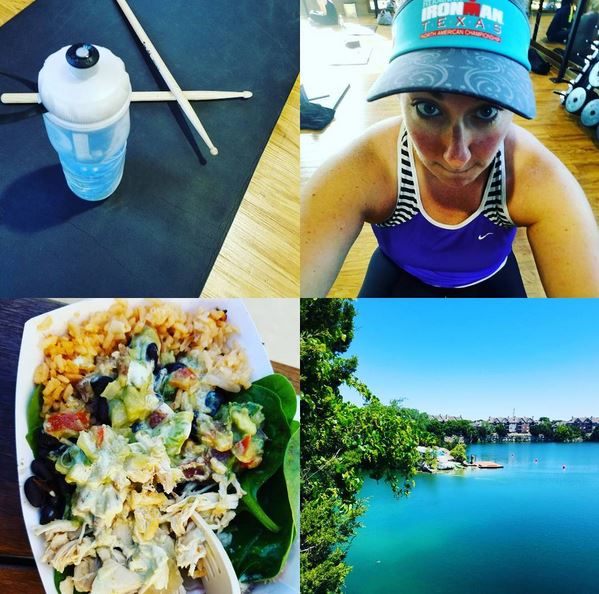 Scenes from #pureaustinexpo17 – I want that bowl for breakfast EVERY DAY.

So, I really did spend all my cash on race day and now I’m living paycheck to paycheck and I need to calm my shit if I ever want to have a savings account again.  This is SO different than last year’s offseason where I didn’t want to touch a bike for 2 months, I am just so mentally fired up to DO STUFF that it’s excruciating that my body is taking so long to get with the program.  I’m unfairly comparing myself to where I was last year this time – after two months of offseason.  I’ve now just passed two weeks.

One of the coaches at our gym also did IM Texas and looked at us crazy when we told her even the little we’ve been doing.  She said she’s on pizza and beer for AT LEAST another two weeks.  So, fine.  I’m done with the pizza part of the equation, I need to watch what I’m eating because I refuse to gain any MORE weight, a reasonable, healthy human amount of light-moderate activity sounds like where I’m at right now.  Walking for an hour.  Riding bikes to work or on our recovery ride.  Swimming a lap or two around the lake.  Paddleboards and kayaks.  Lighter strength workouts.  Longer and harder efforts and I need to take some time apart, for our own good.

And I need to have faith that my body will let me know when it’s ready for more.  It’s killing me to have my season end just as tri season is ramping up and watching my teammates and friends crush races just stokes the fire to get RECOVERED already and back up and out there.  However, Saturday taught me it will not end well unless I give myself the time and space to do this the right way.  It’s just hard and I feel like such a weenie. 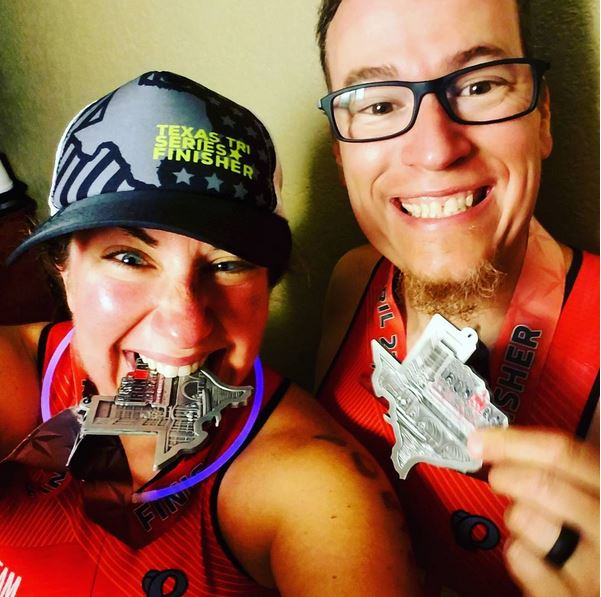 At least I’m an Ironweenie.

So, last week I did these things:

I also walked at least 10k steps each day (an average of about 14.6k actually).

This is definitely the maximum effort I want to be at right now and I’ll probably be dialing it back a little bit this week.  I’m not going to put up a plan because I’m not there yet, but I’m sure I’ll ride bikes a bit, I probably won’t be able to resist the lake being perfect right now at least once this week, I’ll continue to completely ignore running (we’re definitely not on speaking terms after Saturday), and if I feel good later in the week, some light strength work.

Let’s also talk about the realization about how that silly little sticks class kicked my ass.  Of course I’m probably not going to do stuff like that regularly during season, but it opened my eyes a bit.  Ironman training makes you super strong in so many ways, but it makes you so WEAK in others.  If I want to be a more well rounded human and overly stronger, more stable, and functional athlete, I need to do things besides all the miles of run/bike/swim.  To that end, I’m hoping to incorporate some of those types of activities that move my body in different ways over the next few months.

With the nutrition side of things, I’m feeling kind of the same way. 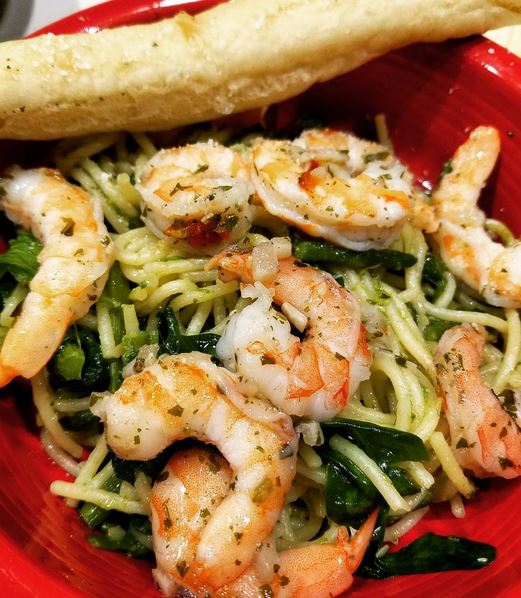 At least I’m cooking up some real foods now that have plants in them, so that’s a step in the right direction.

My mind is ready to cut calories down because oh my stars, I’m ready to start trying to shed some of this unfortunate weight, but I have to make sure I’m allowing myself to actually recover as well and trying to completely underfeed myself would not help me accomplish this end.  I started tracking my food last week, and it went… okay.  I managed to keep approximately a 5000 calorie deficit per fitbit with minimal pain and suffering and my weight stabilized at 189.5.  My appetite is beginning to behave itself, with moments of rebellion.

I’m trying to stay away from a barrage of junk food, drinking plenty of water, and actually quite trying to slowly replace all the carbs all the time with more fruit and veggies, starting with snacks.  I’m back to desert being described as something you have a small amount once or twice a week vs multiple times per day.  I’ve had the same bag of pretzels for two weeks now and there are no other salty snacks around.  My meals are similar, but I’m only eating three of them per day and I’m trying to gravitate towards the more filling ones for the calories because other than plant type snacks, that’s it for the day.

The last thing on the list is our friend alcohol.  I was actually able to celebrate Cinqo de Mayo with tacos and margaritas (homemade for both so they were lower calorie) for the first time in years because I didn’t have some sort of crazy training reason I had to be up super early.  It’s been nice to have a glass of wine here, a beer there, and not worry about how I was going to utterly fuck up tomorrow’s training.  If I actually want to make weight loss progress, I’m going to have to ration this eventually, but we’re still in the “hang loose” phase of this particular adventure for another few weeks.  Track and healthify the food, but enjoy some drinkies. 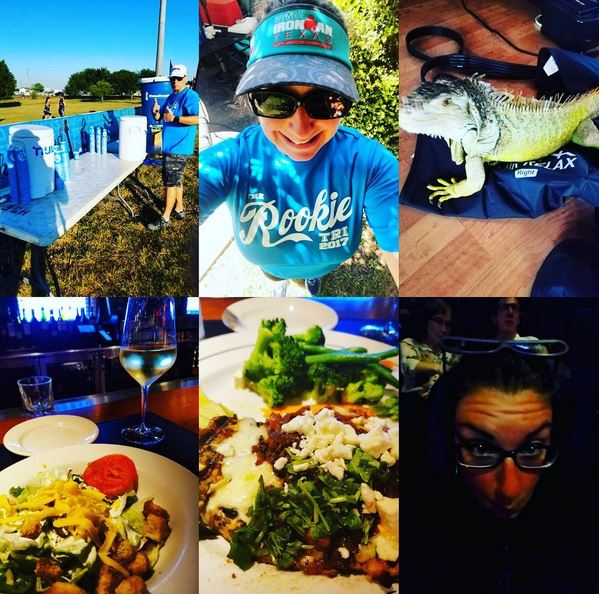 Sunday was a full on triathlon with volunteering, cleaning up, and a movie.  T1 was chillin’ on the couch with a beer and T2 was dinner and some wine.

My mood and energy level definitely perked up a bit this week.  There was gaming with friends. We went to go see a movie (Guardians of the Galaxy 2 – which I HIGHLY recommend and think might be my favorite Marvel movie so far).  We volunteered at Rookie Tri.  We had an early Mothers Day celebration with the in laws after busting our butts at the expo.  The week before, I think I left the house ONCE on Saturday for a few hours but that was it for plans besides a recurring date with my couch and netflix.  It was exactly what I needed, but it’s too pretty outside to make a habit of that!

We also reached the advanced beginner level of adulting!  I didn’t get that haircut, but I was able to finally CLEAN THE EFFING CAR and we got it washed and I’m dropping it off tonight to be serviced.  We finally made a Costco trip, and bought and installed outdoor lighting we’ve been talking about forever.  Additionally, we did a pretty good job picking up of the house, and cleaned out and blew the leaves out of the garage.  We cooked garlic shrimp pasta with asparagus and spinach, cilantro cajun turkey with rice and veggies, and chicken tacos.

Next week is all about moi.  I can’t do much about my body feeling lumpy, inflamed, and bloated, but I can make myself the best version of me I can.

Maybe more if I get antsy but I’m definitely not ready to graduate to Intermediate level adulting just yet.