When I first started racing, my year was pretty periodized by default.

In 2009, I ran a half marathon and then after that, shut it down for a few months. Because that’s what normal people do.

I wasn’t a complete nut yet, and I had these natural cycles before I even knew what periodization and offseason and all those other coach-y schedule-y things meant.

Yearly, I would maintain a baseline fitness level (ten years ago, that looked like 4-5 hours a week – 3x weights, 2x running, and either some arc trainer and/or DDR to round out the hours).  I would sign up for a race occasionally, train 2-3 months for it, and then go back to my base fitness level right after.  There was never any compulsion to “keep what I gained” by boosting my training beyond that 4-5 hours unless it was for a reason.

Then I started racing more.  Since I was racing more than a few times a year (with smaller races to support the bigger ones), and I feel like 2-3 months is the absolutely minimum amount of time I feel like I need to be prepared for a race, I was pretty much constantly training.  It was new and fun and exciting and it made me toy with the fact that I might actually be an athlete!  I remember at one point, I decided to take 5 weeks off because I had been on for something like 17 months.  My body pretty much collapsed that entire offseason – I couldn’t run the whole time because as soon as the heel I injured the last race of the season felt better, my back went out for the entire Christmas break.  The universe was yelling “STAAAHHHHHPPPPP!!!!”.

I’ve learned that for my mental and physical well being, I need to pretend to be a normal mortal human for extended periods of time or I break down.  The length of time I need is predicated by: a) what I have just done to my body and b) the length of time I’ve been “on” and also c) how I feel about life right then/stress levels/etc.

I also have learned that offseason racing is tricky to navigate.  When you sign up for something simply because you do it every year, or because your friends are doing it and you have major FOMO, or because you have a husband that would rather race every weekend vs train, you have to watch your expectations.  For me, FUN racing is when I PR, when I leave it all out there, when I’m a ball of sweat and snot and making the pain face at the end.  Everything else is just paying money to go for a jog with friends.

And sometimes paying money to go for a jog is ok, especially if you get to look like a rainbow threw up everywhere while doing it.

There’s a time and a place for that, for example, the Turkey Trot this year.  I know I’m not going to PR (though I’m pretty sure I’ll beat last year no matter what…), but it’s an excuse to get up, ride my bike ~20 miles and go run 5 before I gorge myself on turkey.  I absolutely and positively plunked down my 25$ registration fee solely to motivate myself to get my ass of the couch that morning.  However, I’m usually not a huge fan of jumping into a race untrained.  Results may vary, but for me, they’re usually not positive.

So, right now I’m mentally and physically stuck in between a rock and a hard place. 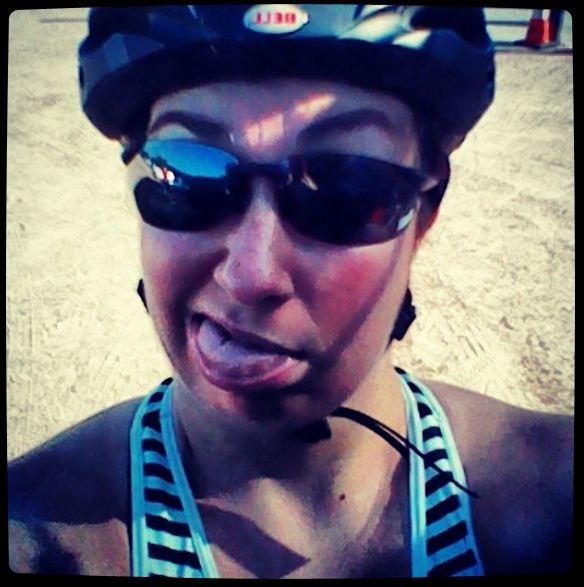 Crazy athlete me likes to go out and try to ride 100 miles on her bike, unready for such a thing, for absolutely no reason.

So, here I am.  I have new running shoes I’ve had for over a week that I haven’t even worn yet.  I haven’t ridden my bike on roads since October 22nd.  I haven’t done weights in over two weeks even though they’ve been on the schedule.  I haven’t swam in almost a month and with the cold snap today… not sure it’s going to happen this week.  My mind is reeling with insecurities about my muscles and endurance shriveling up into nothingness, as well as wasting beautiful days and my gym membership funds not training like crazy this season like I typically do.

I miss dis place – literally the gym and also the figurative place of being so smashed (and accomplished) after a really long hard workout.

However, my mind is also thanking me PROFUSELY that I’m not trying to maintain any sense of a training schedule while shipping an update at work.  I have been much less of a basket case and handling things much better than normal.  I usually have some major breakdowns this time of year when I am in training mode and I’m thankful that hasn’t happened (yet).  My body is LOVING this break.  The weight is falling off (knock on wood, let’s not jinx this) and when I actually do something like the bike intervals I did this morning, I feel GREAT, not tired, not stale, but like my parts are all starting to work in harmony again.  When I DO get back to training, it will be nice to start from a rested, recovered body and see how that feels for once!

As long as my heel continues to cooperate, I have my first run back scheduled for next Monday, but we’ll see how things go from there.  It’s neat to occasionally reap some rewards when you don’t rage against the universe’s wishes and I’m trying hard to listen even if it makes me do things I don’t like from time to time.

I’m at the bottom looking up the hill right now.  Thirteen miles at a fast pace seems super far away right now.  But I’ve been down these roads before.  I know how to climb them.

Tearing it down to build it back up…