In a perfect world, my triathlon schedule for Season Part 1 would be super sprint, sprint, olympic.  However, since this is the real world, my next race is an Olympic on Memorial Day (Cap Tex Tri).  So, that’s some interesting gear shifting (and not just on the bike, har har).

While I’ve never done this race before, it’s on a very similar course to the Tri Rock which I’ve done twice.  And, it’s actually one that I liked a lot, except for the SEARING HEAT of Labor Day in Austin.  Hopefully late May cooperates a bit more.  2013 was pretty wicked hot.  2014 was torrential downpours.  Hopefully we get something in between.

My two showings previously were 3:25 and 3:28.  The first, in 2012, was a pretty proud and shining moment in my triathlon career with a 40 minute PR over my first Olympic. The second, in 2013, was a huge bonk after a week of some mix of heat exhaustion and a stomach bug.  I probably lost at least 10 mins on the run from walk breaks I shouldn’t have needed in a normal situation, sadly, after a pretty stellar swim and bike where I was on track to PR by a lot if I could even maintain what’s normally an easy jog for 6.2 miles. 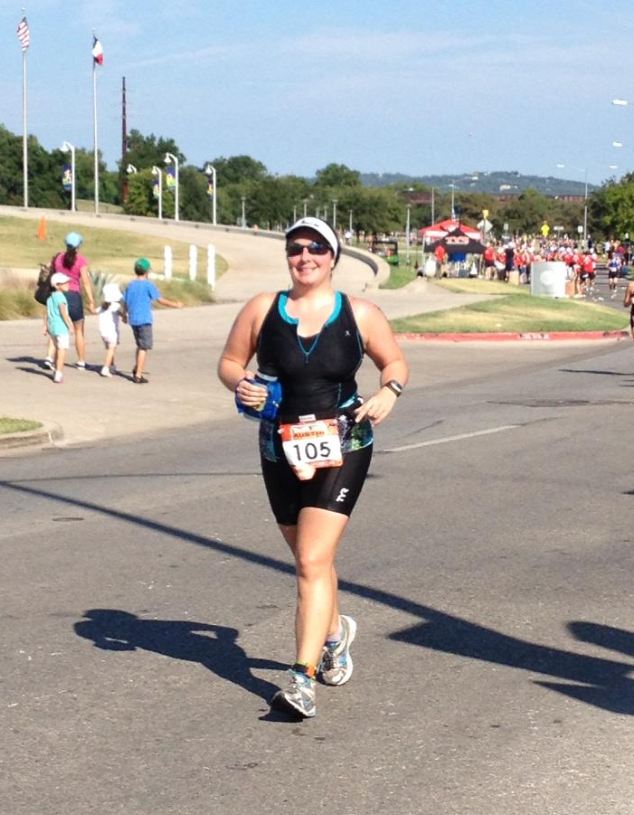 I may look like I’m smiling here, but really I’m pretty much saying fuck you road, fuck you sun, fuck you hill I’m about to run up, fuck you triathlon, fuck you right off.

I took a break from it last year, volunteering for both instead.

This year, we decided that A) we wanted to do an Olympic and B) we didn’t feel like traveling so much after the last 3 races (before Rookie) in a row were out of towners followed by a vacation and C) Gatorbait was cancelled – which sealed the deal.  We’d give Cap Tex a try (a tri? …the puns are strong today…).

So, I’m starting to look at goal times for each leg.  My excuse is that I want to establish training paces, but really, I’m just on a pretty good high after Rookie and looking forward to crushing another race and… sometimes I just want to math nerd out over projected times.

Some maths to prove I’m not out of my mind.

So, while a 3-and-some-very-small-change Olympic would be a party in it’s own right,  I’m within spitting distance of a sub-3 Olympic.  That’s a pretty fun number to chase.

So, what has to go right?

I’m leaving 7 minutes for transitions.  My transitions in 2013 at Tri Rock were just 5 minutes, but the results look like they were set up differently and longer here.  I’ll take any extra time here as a nice surprise but I will be prepared mentally to book through transitions and just take the beginnings of the bike and run courses a wee bit slower to recover if needed.

My goal with gear is to simplify as much as possible.  I can *probably* deal without gloves on the bike.  For the run, I’m hoping the weather will not necessitate a handheld (there’s plenty of course aid) but if it does, you bet your ass it will be frozen.

Analyzing the results, I don’t think that it’s particularly long or short.  My swim was 5.8% faster than last rookie, so extrapolating to this swim, it only looks like a goal time of 35 minutes is possible.  I think that’s probably sandbagging, considering I can swim this distance in the pool 7-8 minutes faster without getting out of breath.  I’m going to go out on a limb and say 33 sounds reasonable unless the course is indeed stupid long.

This bike course isn’t particularly challenging – it’s not pancake flat like Play Tri, but it’s definitely one of the faster speeds I see during the year.  Using the reasoning above, my improvement over last Rookie was 6.25%.  Further extrapolation shows I can expect a 5 min 15 sec PR, which solidly gets me under 1:20 for the bike.  Zliten actually went sub-1:20 in 2013, and we’re both better cyclists now, so it’s not beyond expectation for either of us.

This one is harder to predict, and this is where it gets more exciting.

My run at Rookie improved over NINE PERCENT.  While I really looked at the bike as my breakthrough leg at Rookie, I really should be calling out the run.  I guess an almost 2 minute PR on a 2 mile run is pretty significant, actually, but it didn’t hit me until now because it was the only goal pace I didn’t actually hit.

Now, let’s throw that stupid 1:19 for 10k out in the trash.  That was a silly bad run for me.  In 2012, I ran a 1:08, which seemed like a solid, though not spectacular performance.  Looking at the Cap Tex results over the last few years, 1:08 is wayyyyyy down there in the bottom quarter of the runners.  So, I imagine the course is either spot on or short.

Doing the math the same way as I did for the bike and the swim, my predicted time comes out to about a 1:02.

Here’s those two minutes I need to shave off to get my sub-3.  Here is where I’ll really have to dig deep and push myself to bridge the gap between what is mathematically realistic and what I really want.

I’m pretty sure it’s physically possible for me to run 9:40s instead of 10s off the bike for 6 miles.  I just have to be ready to hurt for it. 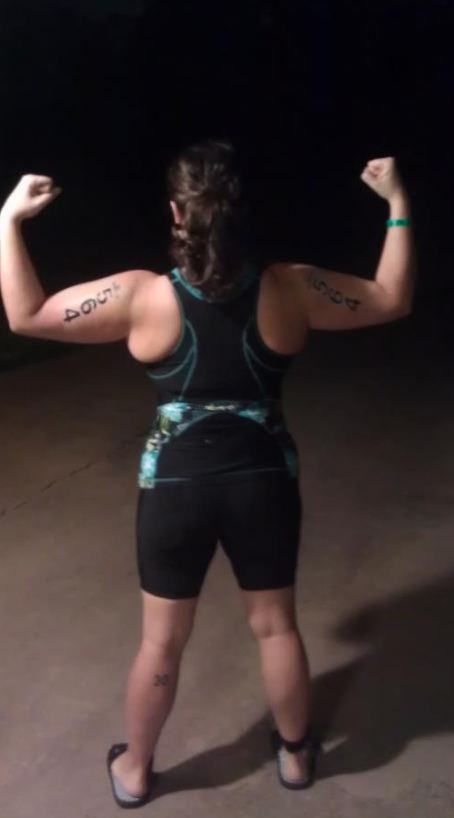 So, who knows?  In a world of 2 minutes, a lot can happen.  I can swim closer to my pool times and make it all up there and come in significantly under 3.  I could have a mechanical on the bike and have to spend 10 minutes fixing it and have my goal time shot right there.  We could be blessed with mild, overcast, and breezy weather on the run where 9:40s are pretty reasonable to run.  It could be stormy like last year and I could get pulled off the course or get sick and not even start.

No matter which way the protein powder waffle crumbles, what’s exciting to me, like goosebumps-type-exciting, is that I’m doing math to get a time that feels crazy fast to me, but is really only a pinch of fairy dust from a solid day away.  Feels good man.

Maybe running those marathons over the winter wasn’t a waste after all, because for some reason, the best way for me to get better at the bike and the swim (and, ok, the run too, 9% improvement is NOT insignificant) was to run all the miles and ignore any sort of other training and not see a whole lot of actual improvement but go through a lot of personal development and get a lot stronger mentally, then take a bit of a breather and then start working on something completely different.  It feels like saying because blueberries are blue the dogs bark at midnight, but if it works, then bring it on the fruit and loud nocturnal canines.

And, maybe I’ve hit it on the head just right there.  I’ve had a lot of frustration with triathlon over the years in that it’s hard for me to put together a great day on all 3 disciplines.  However, with my season opener this year, I just ran a race that pretty much went all sorts of A++++ all over the course.  It could be a fluke, but just maybe, maybe it’s not.

Maybe this is the shit I have had in me for years, but running a marathon the whole way brought it to the surface.  Maybe I had to beat myself up running in the heat and the rain and the cold and for a week without seeing a ray of sunshine and by myself and without music and every day for 5 weeks in January to make me a bit more of a hardass.  Maybe something changed in me this winter, that when a 2 or 6 or 13 mile run off the bike starts to get painful, I have a little more “suck it up buttercup” in me than I ever have.

I’m pretty sure the cardiovascular endurance gains of running an average of about 40 miles per week for 5 months doesn’t suck either.  But, as I’ve seen, you can negate all that fitness by a brain that just decides not to show up or check out halfway during the run.  This year, I’m not requesting that my brain show up.  It’s coming with me, kicking and screaming if necessary, all the way to the finish line, on the remaining 5 race days in 2015.  No surrender.  No escape.