I realize half the time when I try to recall my week, I have to look back to instagram, dailymile, twitter, and facebook.  Some people are scared to have their personal life all over the internet.  In my opinion, someone has to help me keep track of it, I’m thankful for social media and my (sometimes over?) sharing.

Anyhoo, this week I did quite a few things I’m super proud of! 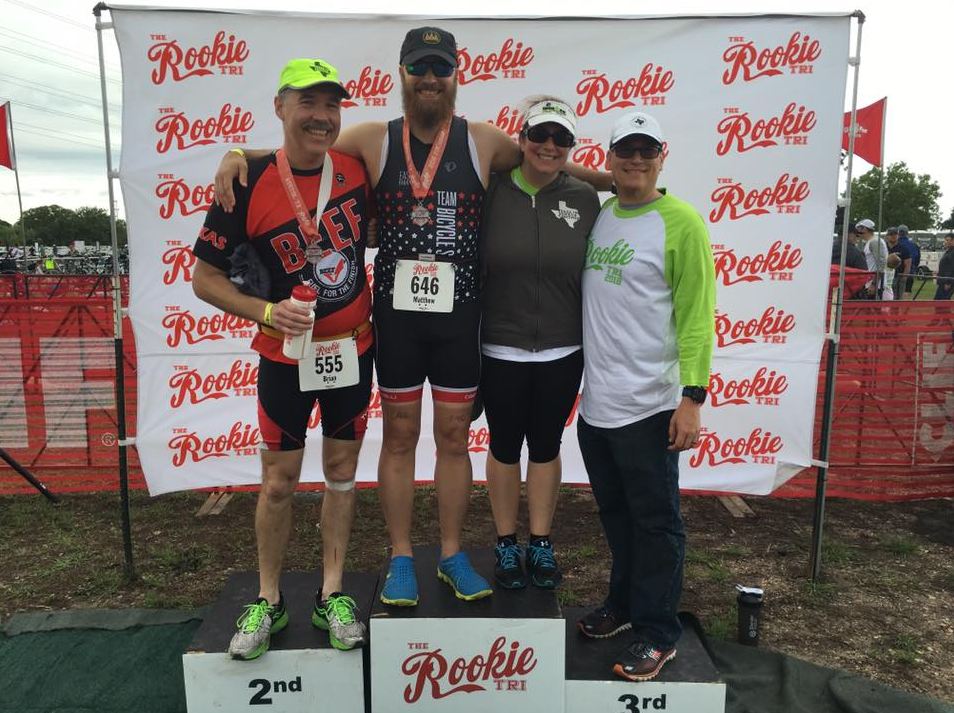 Go team tri!  Some day we’ll all be racing together at the same time…

While I had ulterior motives (getting credit in the Texas Tri series), the important thing to remember is that we got our asses up at 5am to be at transition OPENING and body marked athletes and then handed out water and gatorade at the transition aid station.  Body marking was super fun, and I’d do it again, but it was 2 squats per person to get the numbers on the front and back of their legs, so I did about eleventy billion bodyweight squats that morning.  Maybe I should count 3 weights workouts last week? 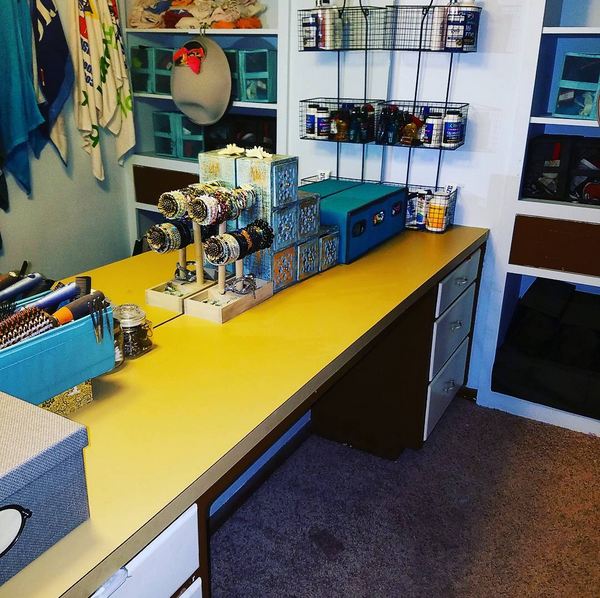 I *finally* finished the bedroom vanity project (last night around 10).  That was tough, y’all!  While I will admit that I could probably use one more clean out of the actual drawers, I’ll call this a win.  Everything now has a place, and there’s an intentional place for everything.  I sort of wish I had a before picture, but I’m kind of glad I don’t.  The whole clean space on the floor between the drawers was full of crap, there was very little clear counter space, and crap was shoved in the shelves every which way.  Also, I have a jewelry problem.  Two weekends and about 100$ at ikea/homegoods later?  Voila!  Organization!

This stuff both makes me happy and pisses me off at the same time.  I am looking forward to getting more rooms tackled, and also to when I start training and I stop giving a shit about what my house looks like again for a while. 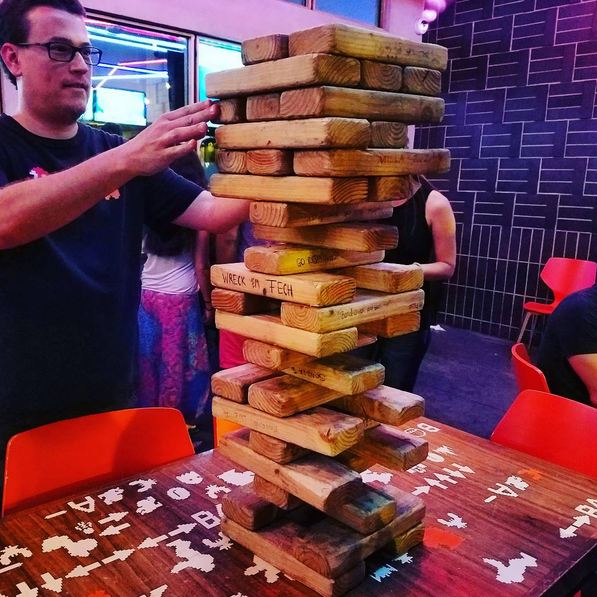 Just a few moments away from topping over…

I’m sure it sounds weird to say I’m proud I went to the bar, but I realized it had been at least four months since I’ve been to a social drinking establishment (not a place where I got food and a drink, but an actual bar).  After work and gaming at work, we headed a few feet over to the new Kung Fu Saloon for a drink.  They have giant size patio jenga!  We ended up meeting two other couples and playing against them and won both times.  The first time, the tower got almost double the height it started!  It was super fun to be social like that, but it’s definitely not quite my scene anymore.  Can I say it’s just a change of taste, and not me becoming a geezer? 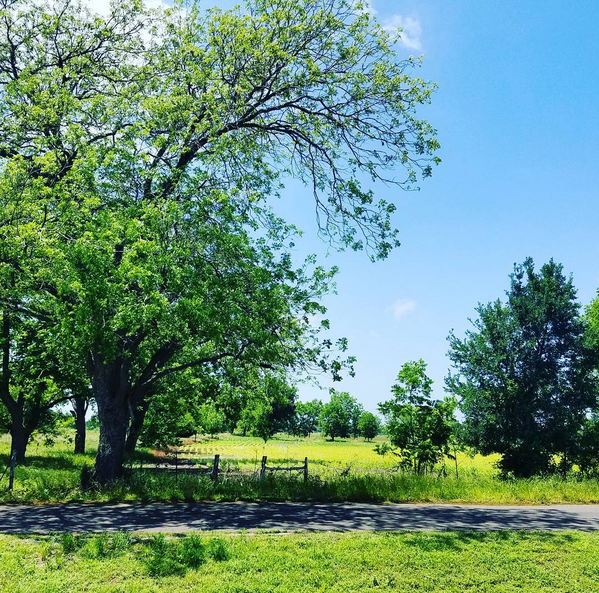 Texas is pretty (as seen on the disc golf course).

Saturday, I finally had my first run that I wanted to keep going, since… I don’t know when.  Sometime last year perhaps?  This is a good sign that my brain is continuing to unbreak.  I’m not in ANY fucking hurry to do 15+ mile runs any time soon, but Saturday, I only had time to do 2 miles and I think I would have been up for about 5-6.

I’d sum up last week’s “training” as very little formal stuff, but lots of activity.  The actual, trackable stuff went like this:

…and, that’s it.  Well, including the fact that I had two 11k, three 13k, one 14k, and one almost 20k day – including Frisbee Golf and triathlon volunteer work.  At some point, I probably need to start doing more official stuff.  I’m just not ready to force anything yet.  If I want to burn my calories by taking 3-4 walks a day, so be it.  I’m especially not starting that yet.   But soon.  We miss our endorphins. 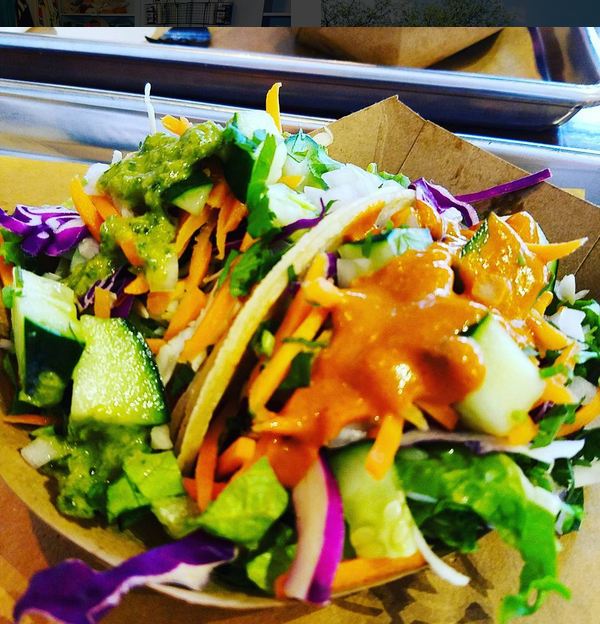 When ordering korean bbq tacos don’t forget the kimchi.  I made that mistake.  Never again, they were so much better with it!

In terms of food consumption and all that, I was really good last week.  According to fitbit, I ended up averaging just about -1000 per day, which actually equates to the 2 lbs I lost.  It’s really nice when it all makes sense and you actually get results out of hard work.

My activity level right now is PERFECT for losing weight.  Walking all the time and easy bike rides do nothing to raise my appetite.  Whereas before 1200 calories was miserable, I’m looking more at 1500-1800 to stay -1000, and it’s amazingly easier to be a person and also lose weight at the same time.

I’ve reintroduced the recommended daily allowance of veggies and fruits, vitamins, and water to my diet as well.  I’d say I was about 5/7 days on the first two, but drank water like a champ.

As for this week, my goals are: