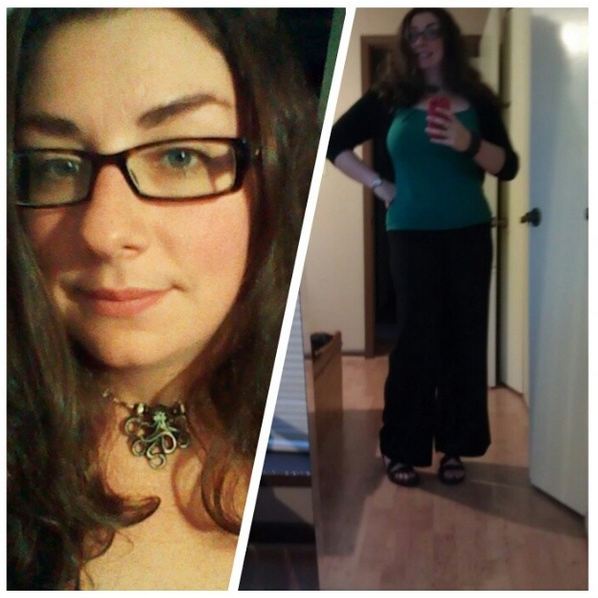 February is one of those transitional months.  March is a GREAT GREAT month due to birthdays, usually better weather, fun stuff, first metric of the season (Rosedale) which means I have to motivate myself to ride outside at least few times in preparation, and it’s usually just the start of the best part of the year (read: everything but Jan and Feb, really, minus a few whiny moments in August to get over the 100 degree temps).  While January is just a whole lot of depressing suck, February there is at least light at the end of the tunnel.  Helps that we’ve had some awesome, although unpredictable weather.

Also, there was no racing in February.  It was kind of nice!  I mean, I’m racing on March 1, so it’s close, but I’ve had 5 weeks and 6 days of just train and build, train and build, and it’s been great. I find I really figure things out a few weeks into a block, and if I’m racing too often I miss that “learn, push myself, recover, and grow” part of training where I can do it in a less judgmental place.

I may be the ONLY person in the world that gets excited about trainer rides, but I love them, and I’ll top 400 miles on my bike JUST in February (how’s that for bike focus), and with 200+ in January when I really wasn’t trying, I’m pretty happy with butt in saddle time in 2014 thus far.

I’ve been keeping up with the swimming longer and doing focused sets and it seems alright – I’m posting slightly slower times overall, but I suppose that makes sense when I am swimming twice as long (if I could hold that 8:50-ish pace I can hold for 5 miles for 10 miles I would have a HUGE PR but I can’t, not yet) and also taking rest during sets as prescribed.  I haven’t felt any major breakthroughs, except the one in which Zliten actually likes spending an hour at the pool, so I’ll take that one, it will pay divedends.  I’m looking forward to hopefully getting some (a wee bit chilly but that’s why I have a wetsuit) open water time next month.

Running – yeah.  She’s an unpredictable mistress.  I’m looking at about 75 miles this month.  MUCH better than Januray, as expected.  I’ve alternated between 4 shorter runs (~5 miles) and 3 with one longer run, but ramping up after the half has gone slower than I’d like, oddly enough, you can’t just add swim and bike volume and expect to adapt immediately.

I seem to have maintained my run gains for the most part, though its changes day to day.  My standalone 10 miler earlier in February was like UGGGGHHH to keep 10:45s, and my post bike 9 miler last weekend felt like prancercise to stay around 10:30s (both flat courses on nice overcast temperate days).  Next month, I aim to ramp back up in miles to ~30+ per week (it’s run month).  I responded really, really well to higher mileage with appropriate rest in the fall, let’s see how that goes with more swim/bike mixed in.

My body has been in decent shape.  I tweaked my back once, but that resolved itself in just over a week (and I got a great swim focus week so there’s that).  My heel seems to be doing weird things – it’s touchy but if I take care of it I’m doing just fine. Lately, I need a 1 mile or so warmup to get going faster paces, which is probably a GOOD THING anyway.

I am definitely playing the shoe shell game.  It seems as if a week+ of wearing my hokas straight triggers heel ouchies.  Sads.  I love my clouds.  They feel great sometimes and not others.  I’m going to work on alternating them with other shoes, but I don’t think they’re my one go-to shoe.  I’m not sure if my new Asics are wonderful or horrible (I have only put ~25 miles on them), but my old shoes I did the marathon in (that are not QUITE defunct yet) seem to be a safe middle ground right now, so I’m wearing those as well on days I feel vulnerable.  My heel feels excellent walking around on these new massaging sandals, so I bought them and am doing that.  Icing it also feels nice.  I’m going to race in the old Sauconys tomorrow, and hope the rest week next week works its magic.

Not much progress on the scale, but it feel like my shirts are getting larger in the waist and smaller in the shoulders, as they tend to do as I ramp up for tri season.  It’s weird, I only fluctuate about 5 lbs total between my OMG I’m so bloated and my “not bad, not bad” weight right now, but it’s like night and day to me how I feel at 175 and at 180.  So bizarre.

And now onto ALL THE COOL THINGS from February: 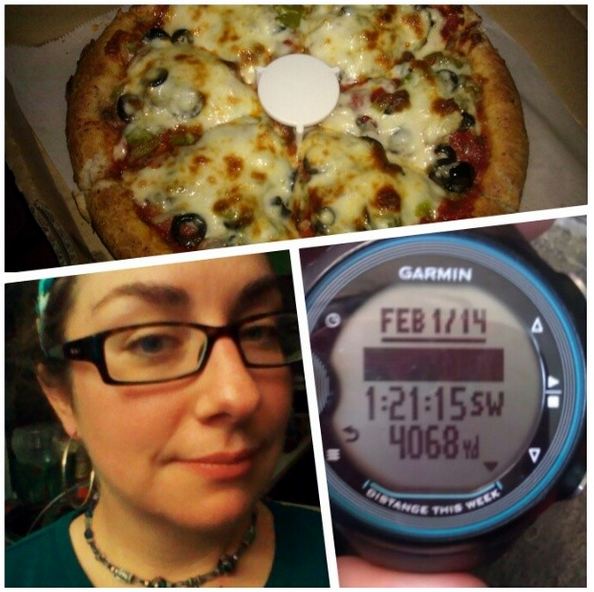 I swam the longest I ever have in the pool (I had it all to myself and I just forgot to get out) and then ate delicious pizza. 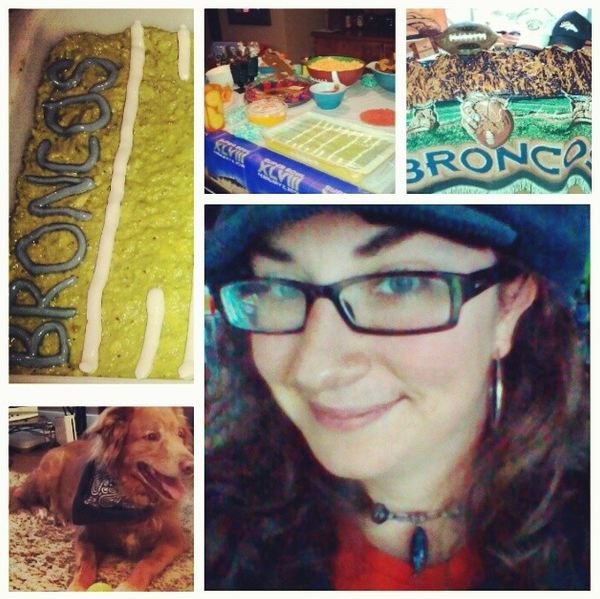 I actually participated in Superbowl Festivities this year (go sports! win the things!), with some DIE HARD Broncos fans.  While it didn’t end well, their house was SUPER festive and it was fun. 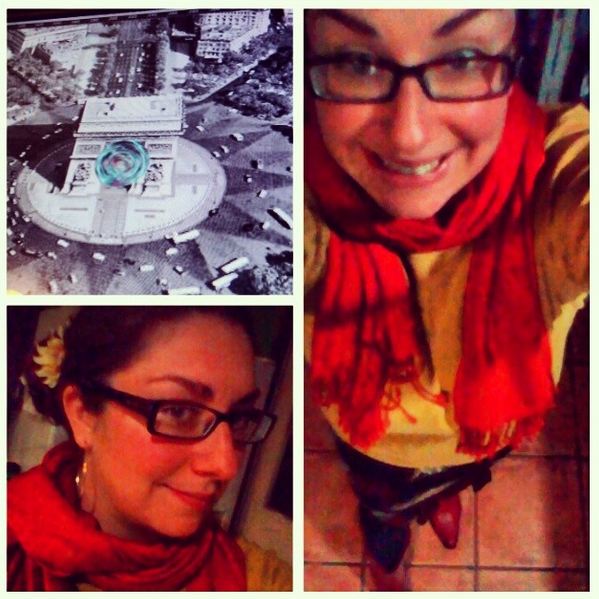 I got to game again!  We finished the session (I lost my chicken pet to a sub-machine gun… SADS) after taking over a dirigible and found our portal in the arc d’triumph in Paris.  Now, next session it’s my turn to tell the story.  Of course, I picked something ambitious and scary and hard but its what called to me, so look forward to that in March. 🙂 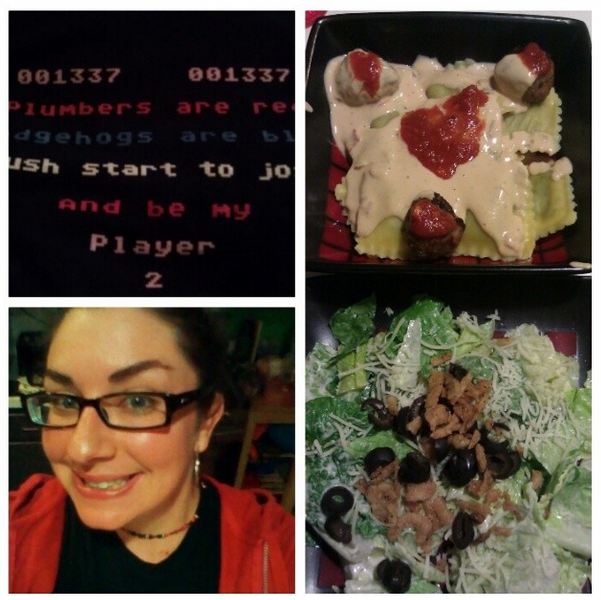 We celebrated Valentine’s day.  It’s funny, we called everything over the long weekend was “romantical!”.  This was my romantical shirt, and I made romantical caesar salad and romantical arugula and cheese ravioli.  I even put a heart on it because I am teh cheesy. 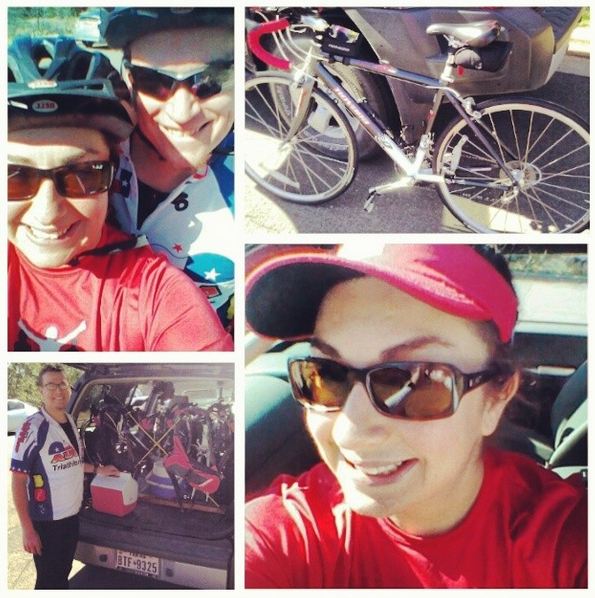 Aieeeee bike ride outside!  I am a wimp and skipped two planned outdoor days earlier this month due to cold or wind, but this day was perfect and it was a great 43 miles around the veloway with a great brick run after. 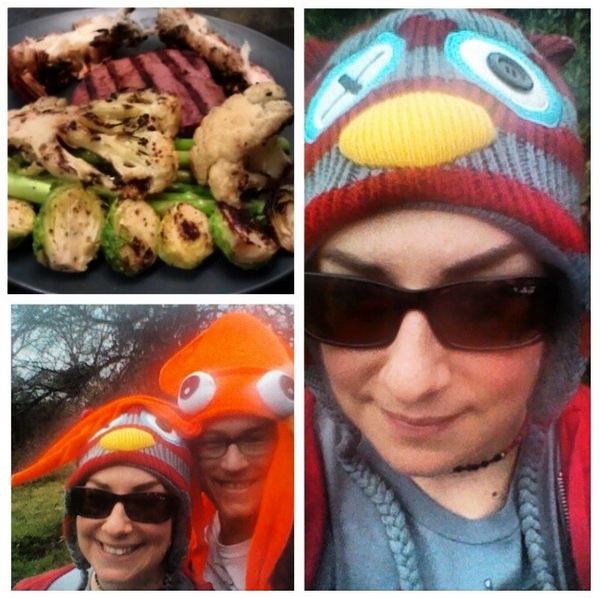 Zliten’s meal for me was romantical filet mignon, lobster, cauliflower, asparagus, and Brussels sprouts on the grill.  It was a great weekend of eating.  First, though, we got our cheer on for the Austin Marathon with our cheer hats, handing out bananas around mile 18.  I think I prefer cheering that one instead of racing it, but maybe I’ll do the full some year. 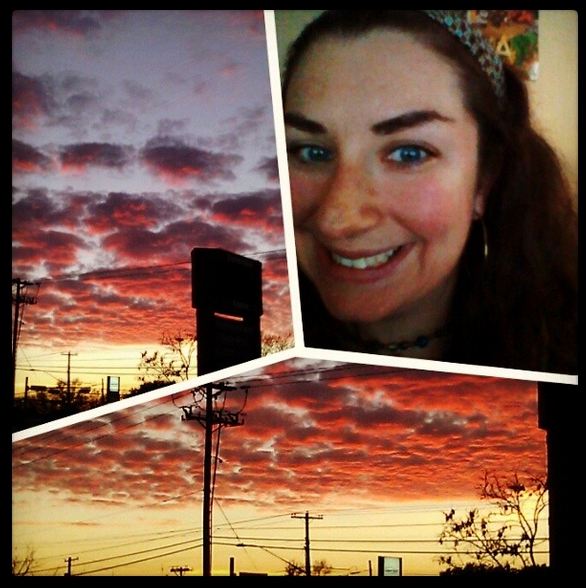 President’s Day, we were treated to a great sunset, and I saw it as we came out of our romantical (read: ouchie) massages at the Beijing Massage place.  Also, who put Pinocchio’s nose on me? 🙂 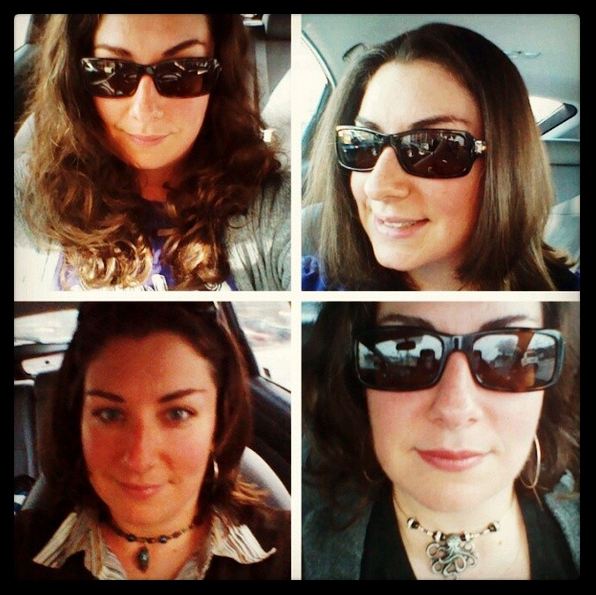 I finally got into Birds (yep, procrastinated again and ended up at the walk-in place instead of supporting my awesome friends of friends who do hair, oops) for my yearly shearing.  And…uh… it’s kind of short.  But it’s super low maintenance, and will be rather nice instead of dragging around almost a foot more of sweaty mop through two-a-days. (Upper left, before, upper right, day of, lower left, day after, lower right – sweated and showered in and looking more like my normal fro. 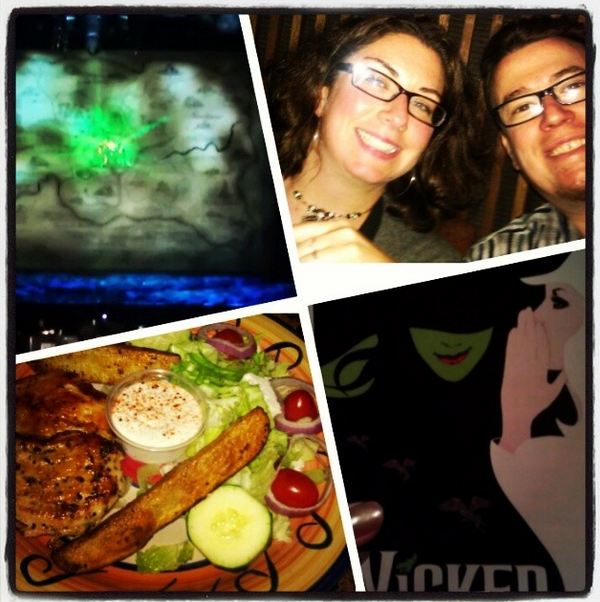 Wicked!!! This was one of my Christmas presents to Zliten (and to me, of course :D).  We got some yummy greek food first, and then settled in.  The show was FANTASTIC.  We both loved it.  I forgot that Broadway shows usually run ~3 hours, and we were shocked by the 11pm conclusion.  Made getting up the next day hard – I’d say we’re old, but really, we’re just triathletes.

And, that’s pretty much a wrap for February fun times.  March should be pretty legendary, so onward and upward!

What was your favorite thing you did in February?