Bikes to nowhere, adventure snorkeling, and local beers – Liberty of the Seas

I do love cruises, but they have a history of doing bad things to me. 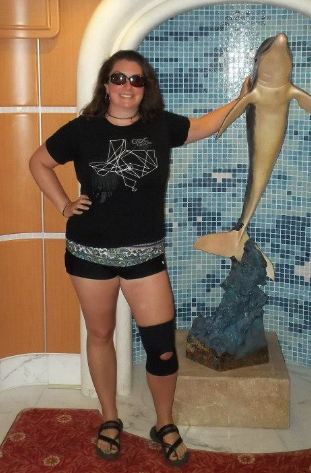 In 2011, my back went out and I got a nasty cold.  In 2013, I injured my knee and I got a cold the last day.  2014 and 15 I did it to myself with a half marathon and marathon the day before the cruise. 2016 my body was totally healthy, but I discovered over spotty wifi in Belize that my company had done layoffs that day.  While I look forward to these vacations, I also am always wondering what bad thing is going to happen.  While it was annoying to have a cranky back through most of the vacation, it was definitely a MILD annoyance compared to some years…

Sunday’s drive was fairly uneventful minus a 45 minute stallout in traffic around Houston.  We got to the pier, everything seemed chill, we got in a short line to get on board and… technical difficulties.  Their internet was out so the security photos weren’t being sent up so things were taking a long time.  We got put in a line and then sent back to sit down and then another line and then as we got up to the end we were told to sit down again.  We’re on about hour 7 of not eating anything so we’re cranky and we decided we weren’t getting displaced in line again so we just stood there.  And stood there.  With heavy backpacks on… (foreshadowing…).

Finally we got on board and lunch (food was glorious) and went to the mandatory boat drill and since we were signed up for late dinner this time, we had a few hours to kill.  I asked Zliten what he wanted to do and he really wanted to hit the gym, so we rode bikes for 30 mins and stretched. 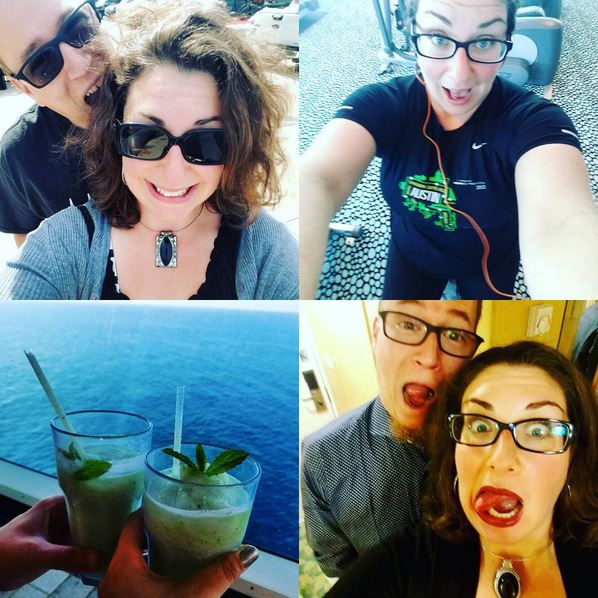 Then, we watched the boat sail away from the hot tub with some frozen mojitos.  This really started vacation.

We drank some wine and got dressed up for dinner.  Since it’s the same boat, around the same time of year, it seemed like the menu for the week was pretty much the same.  Last year, I had seafood spaghetti with oysters, scallops, and shrimp.  Guess what I had this year? 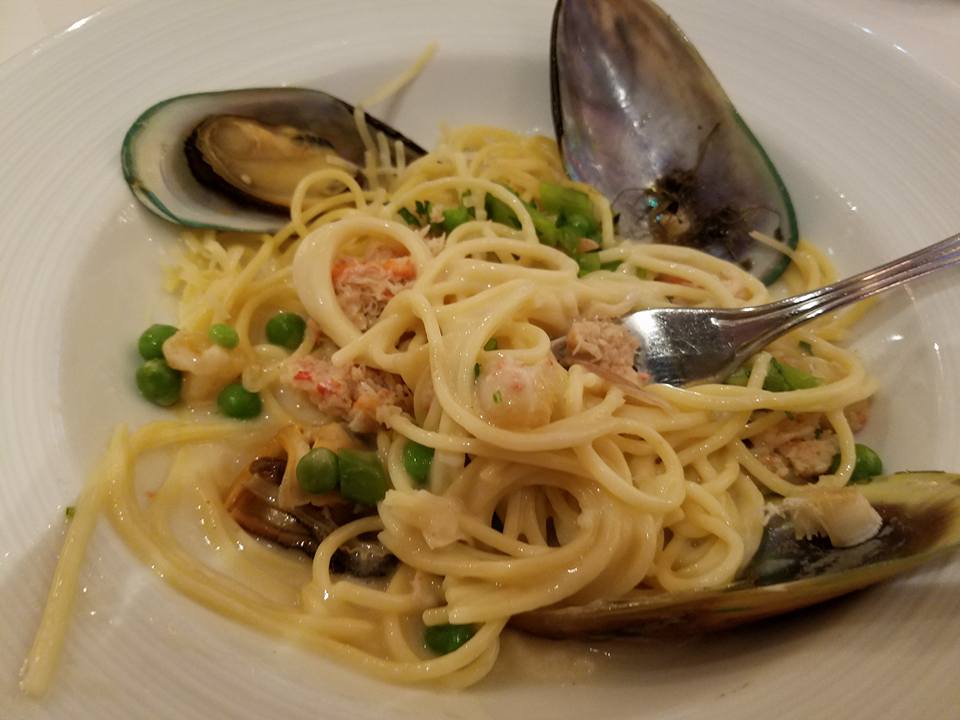 We called it an early night and retired back to the room to read books and sleeeeep.

Monday was our first day at sea.  We slept until we woke up without an alarm and still hit breakfast.  I kept these small and had a little corn beef hash (my cruise treat), some fruit, and a few potatoes.

We met my parents for cards and played a few rounds.  Then, we did another 35 mins on the bike and stretched before we got hungry for lunch. 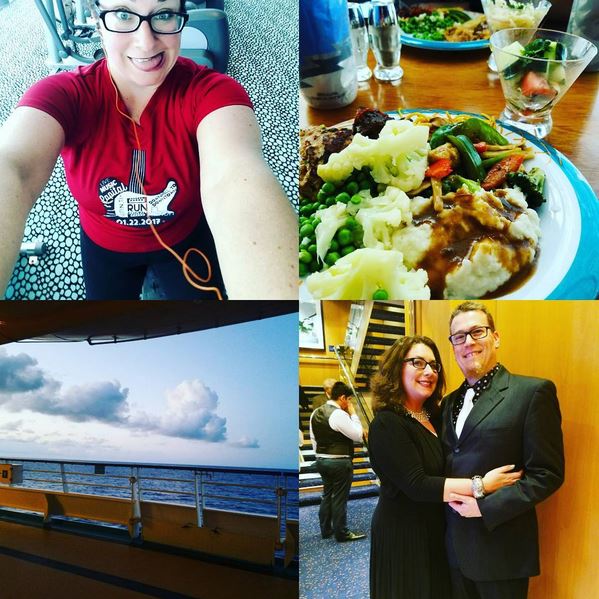 The afternoon was for the pool, and a few drinks, and more lounging until we had to get gussied up for formal dinner.  We clean up alright.

After dinner, we headed up to the disco and spent the evening talking to random people and drinking a lot of Crown Royal on the rocks before some late night snacks and bed.

Tuesday was sort of a repeat of Monday, except a little less sleep and a weee bit of hangover that went away rapidly and my back felt SUPER out of place.  Fancy that, running around all evening in heels + lugging around a heavy backpack for hours + cruise chairs/beds not being super comfortable didn’t do me a world of good. 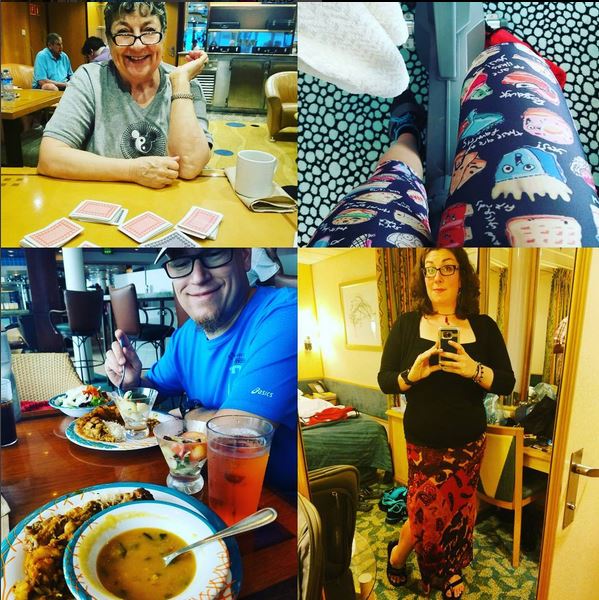 Anyhoo, we were up in time for a quickie breakfast of relatively the same thing.  Cards with the ‘rents.  Bike and stretch (and stretch and stretch and roll).  Lunch.  Pool.  Pretty sure there was a nap in there somewhere.  Dinner – one of my favorites from last year, crab cakes and cilantro cod.  Sleep early because the next day we arrived at our first destination!

Wednesday is when vacation really, for real starts for me because it’s time to go hit the beach for a few days instead of just look at it, but also it’s half over.  Boo.

Started out with a *slightly* larger breakfast since we were playing in the water all day.  We rode past this sweet lighthouse on the way to Tabatya Beach and then all of a sudden we were there.  This place was amazing, and I’m not even showing you the underwater photos yet. 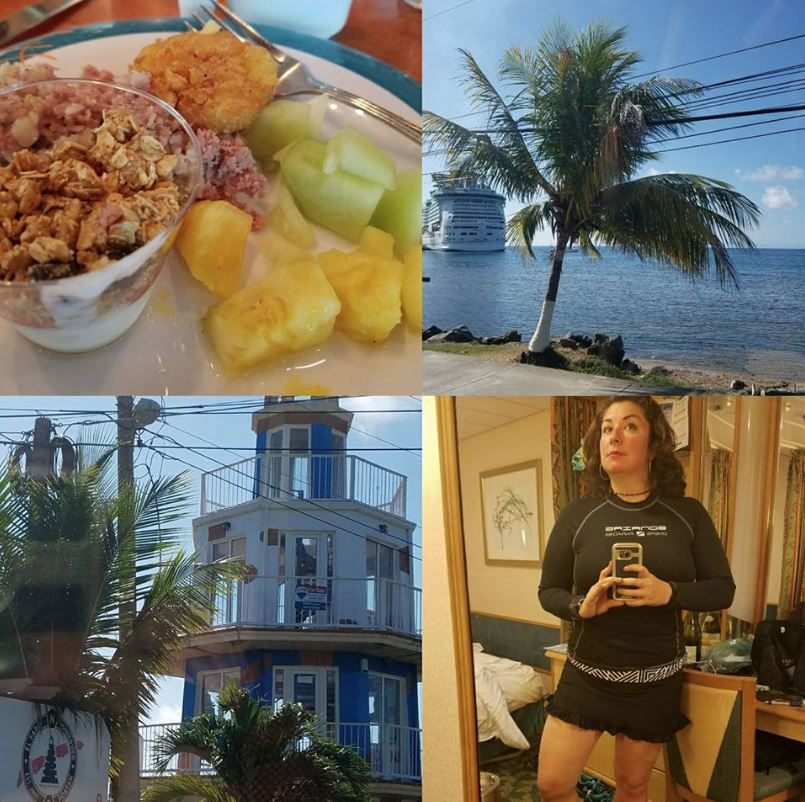 We spent over four hours snorkeling the huge mass of reef (reefs?) around the beach. The last time we were in Hawaii, on one of those hawaii boat charters, we’d spent a whopping two full days in the water.

I’ll do a play by play of all the fish pictures once I’ve processed them, but for now, you get THIS happy fish after those four hours, what sounds like a totally mundane but actually super amazing lunch of bbq chicken, rice and beans, and coleslaw.  And a mojito. 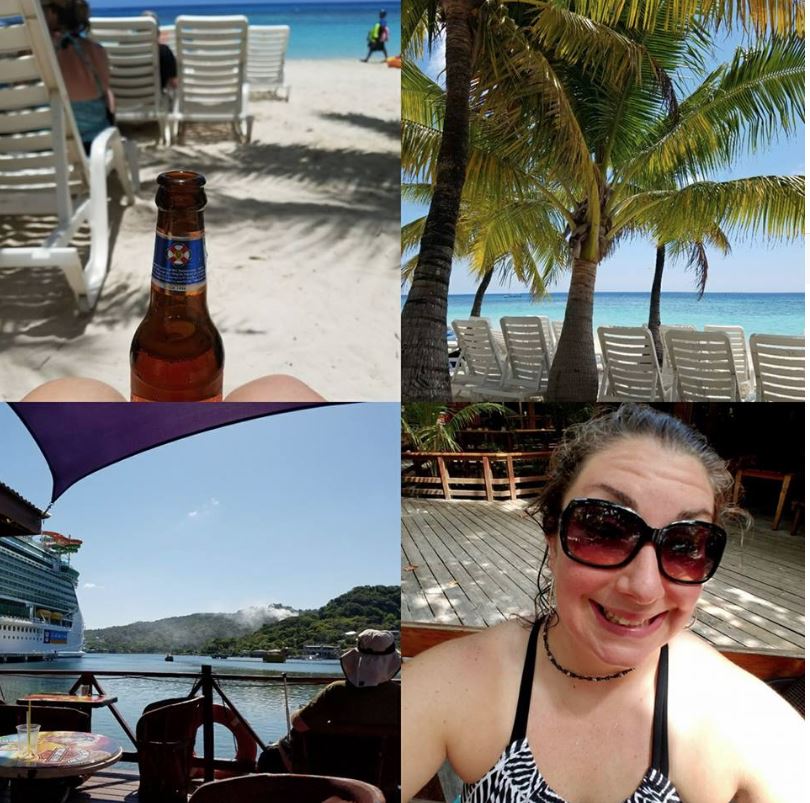 We hit a bar right at the port on the way back to have a few more drinks off the ship (read: WAYYYY less expensive) and enjoyed the view before we hurried back to play cards with the ‘rents. 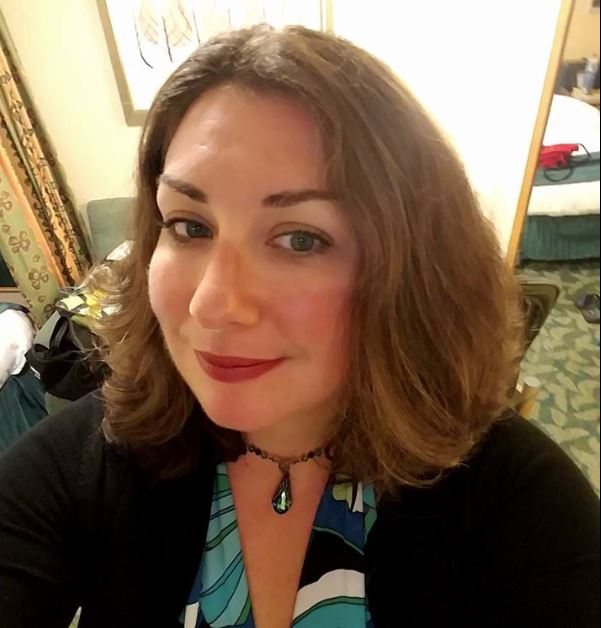 This is my dinner face (and wearing one of my favorite necklaces to boot), but I didn’t stay up much after that.  I’d say I’m old but I’m really just a fish – playing in the water is ALWAYS going to win out over just about anything else ever and I had two more days of that planned.

Thursday was a little nerve-wracking.  This was the day that got ruined last year by work news.  However, it was a different port and we had different plans, so I was excited to try something new.  Speaking of something new, I found stir fried veggies at breakfast.  It sounded like an odd thing to eat in the AM but they were actually really frikkin’ yummy so maybe I’ll start making breakfast stir fries… hmmm. 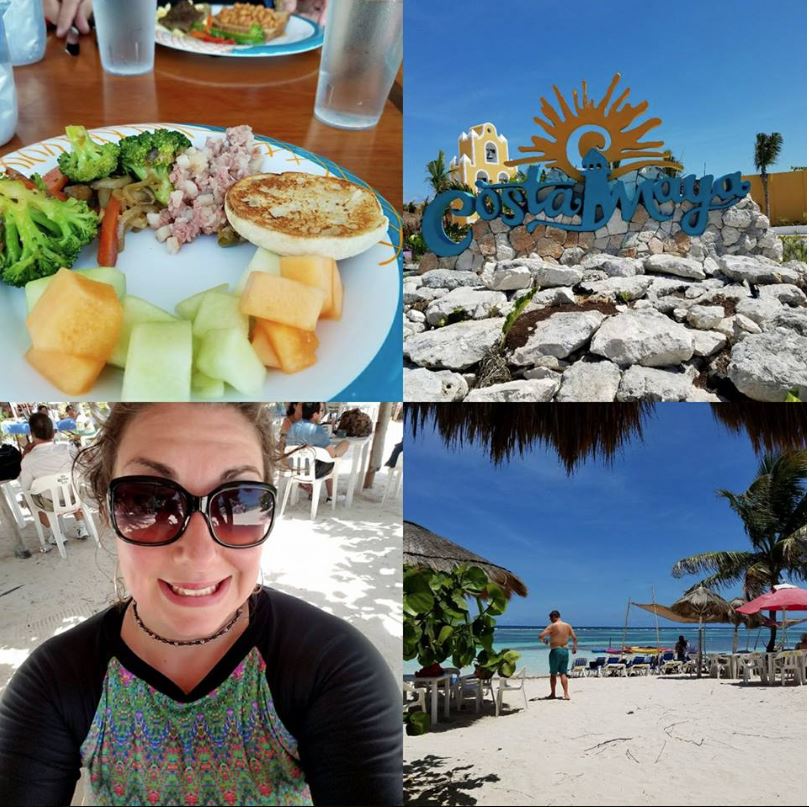 We taxi’d out to a beach called Yaya.  Apparently you needed reservations, so a nice older gentleman escorted us to a different area called Carribean Life.  There were no lockers and we were a little nervous about leaving our stuff there, but hey, stuff can be replaced and adventures can’t, so off we went into the water.

This was not the most ideal place to snorkel.  We found some reef in the two miles-ish we swam, and saw some cool stuff like a giant pod of squid.  However, we spent maybe 20 minutes snorkeling and the rest of the time swimming (transporting ourselves).  Sometimes fighting some decent current.  Sometimes hurrying through boat lanes to make sure we didn’t get squished.  Adventure snorkeling! 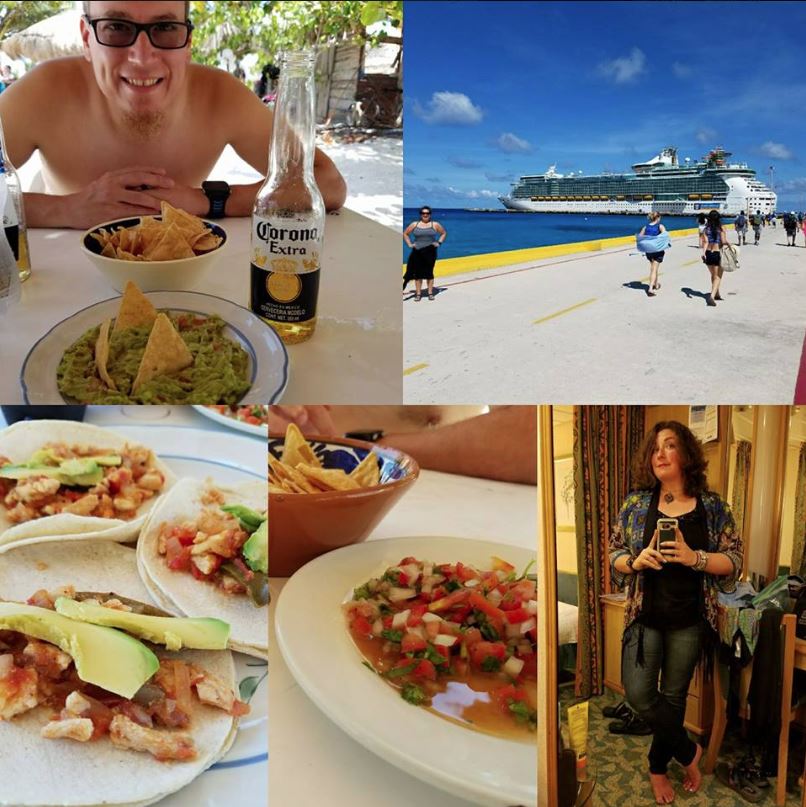 After that, we were ready for refueling.  Local beer (Corona, LOL).  Pico.  Guac.  Chips.  Chicken tacos.  It was all really great and fresh.  There were ladies offering 20$ massages on the beach and with my back all sore, I took advantage of this.  She worked on me for an hour and twenty minutes.  I was super relaxed by the end.  And… I can say I got topless (very carefully without ACTUALLY exposing myself) on a beach in Costa Maya Mexico!

There was a swim up bar in a giant pool at the port, and I made Zliten get in with me for about 10 minutes.  Because there was a pool and I was there.  Next time, I’ll definitely take more advantage of it.

We played cards around 5:30 and then went kinda casual for dinner and after another sun baked, salt-crusted, fishy type day, we hit the hay pretty quick.

Friday was diving day!  Wheee!  We skipped breakfast so we could sleep in and still make our diving appointment.

We ended up the only two people signed up, so we had a private dive for cheaper than the ship prices.  Score!  And…we saw not one, but TWO turtles!  And lots of other cool stuff.  Day = made. 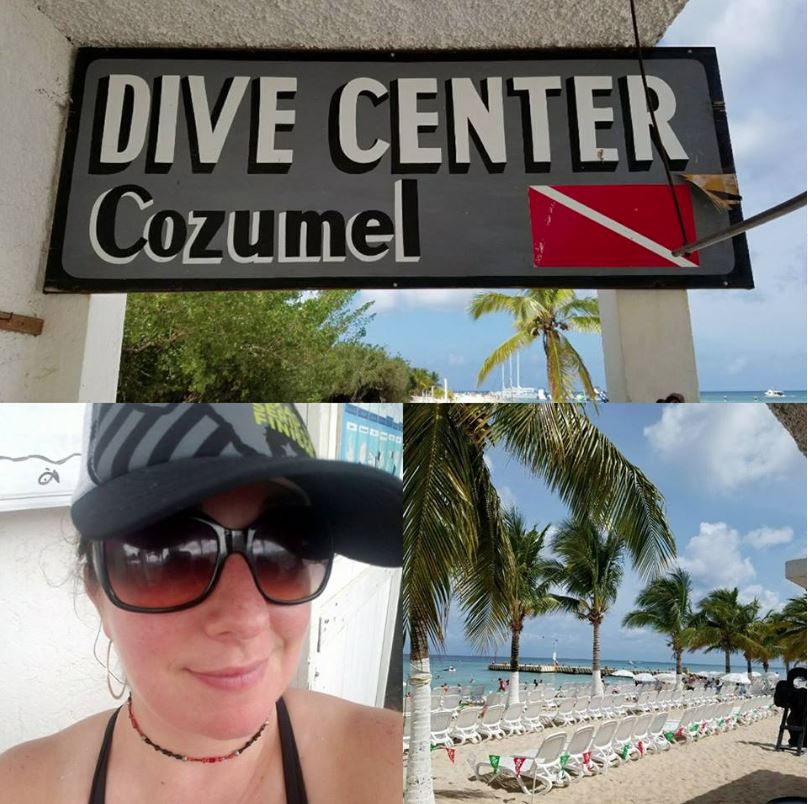 Our plan was to take advantage of Playa Maya, but we left the dive boat later than expected and the all-inclusive price wasn’t really worth the 2-3 hours we could spend there.  So, we hit Senor Frogs and had our first meal of the day: we split nachos, chicken tacos, and had giant margs and maybe a few shots poured in our mouths. 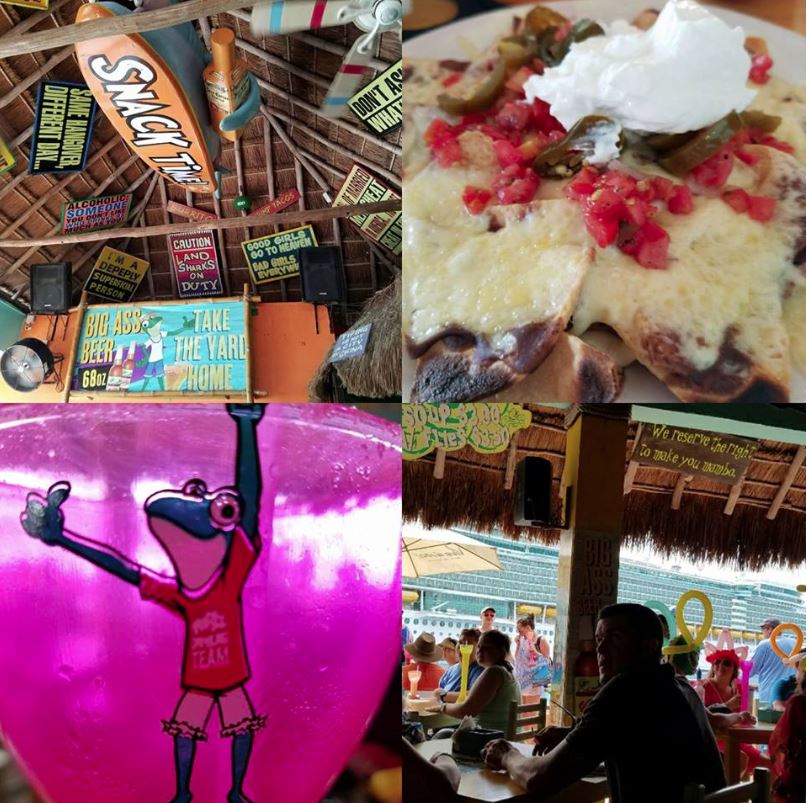 We spent the rest of the afternoon on deck and marveled that this is probably the most sober we’ve ever left Cozumel (read: not falling down), so we had a *little* more to drink to make up for it.

We fancied up for the last formal dinner.  Richard brought me two lobsters because he is awesome. 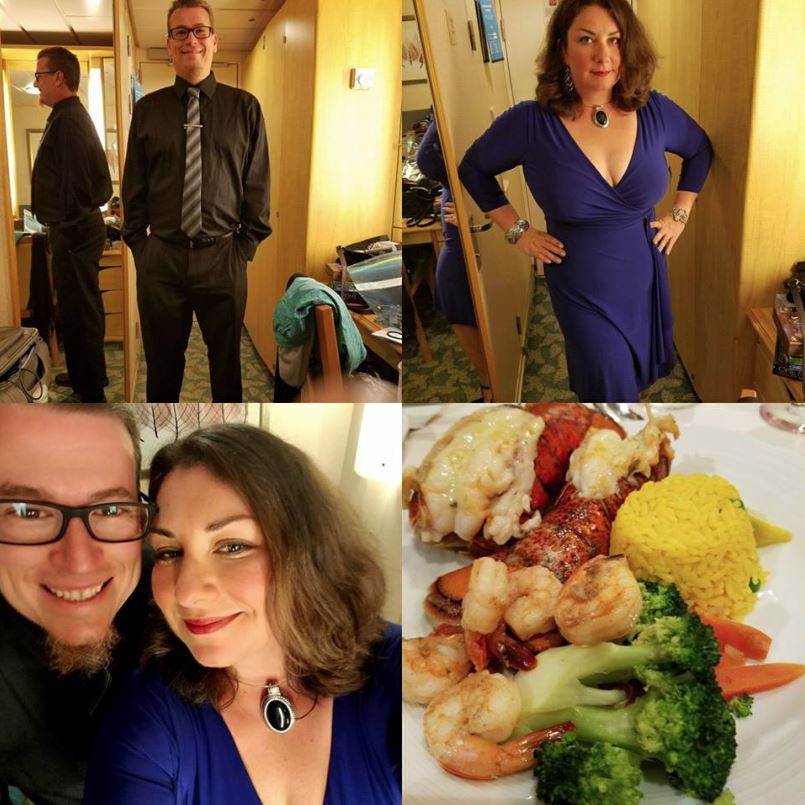 Then, we sort of flitted around the ship.  We lost 30 bucks in the casino SUPER quickly so we left.  We then hit the disco and actually danced this time!  We lost our seats from dancing so we went to a different bar and found a completely abandoned comfy lounge.  Then we found out bars were closing so we got munchies at the cafe and went to bed.

Saturday is always the saddest day at sea since you have to leave the next day.  We skipped breakfast again to play cards with the fam, hit lunch, and then decided instead of all the crazy things we wanted to do (gym! waterslides! mini golf! rock climbing!) we instead promptly took a 1.5 hour nap and then went and swam and read by the pool until it was time to play cards again.  I think I ended up with about a 7 and 5 record for wins and losses.  We all did pretty well trading off with the wins. 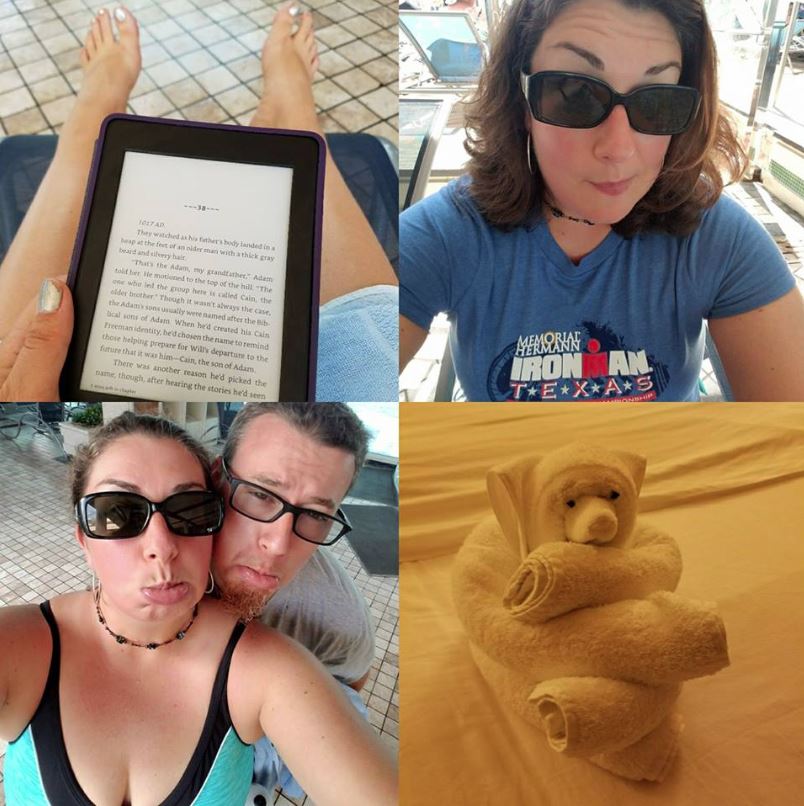 I honestly didn’t write down the food I ate as well as I did last time, but I do remember this amazing appetizer (that I didn’t snap a picture of) – scallops with chorizo in a cauliflower puree.  Sounds weird but it was amazeballs.  I got a tandoori chicken salad with yogurt dressing that was amazing, and we split a bunch of desert around the table and the key lime pie and cheesecake were the best!

After dinner we did the packing we had put off, picked up our formal pictures (for the relatives), read books and fell asleep.

Once I process the other cameras pictures I’ll put up a fishy highlights post and add them here as well.