While stepback week was packed with stuff not-related-to-triathlon, it also gave me over 100 hours off formal training which was very needed and I am ready to get back to it this week.  Especially because this week starts Build 2 – in which I get cleared to go faster than Zone 2 for more than 20 seconds at a time!  This is a major WOOOHOOO!

I really don’t have much to say about training this week.  I did 2 easy runs in or close to zone 1, 2 easy trainers with no resistance, 1 easy swim, and 2 easy weights sessions.

Run: My easy run pace is where my Zone 2 run pace was a month ago.  I’d like to see that improvement every month, thanks body and universe!  I was hoping that so much time off would totally heal my heel, but then I walked around with a 60 lb scuba set up all weekend on a rocky cliff with non-cushy scuba boots.  So, it’s FINE but it still talks to me every once in a while.

Bike: 1/5 resistance is really just like watching a movie on a slightly uncomfortable seat.  My average HR didn’t even reach 100 (it was 97) on Thursday’s 45 min ride.

Swim: The first swim was uneventful, and we even cheesed out on the second one because I threw a little tantrum about it and decided that a 30 min easy swim was not worth the mental fortitude is was going to take to get through it.  It was also the fifth day in a row without a day off and two of those were 3.5 hour training day and the race (so long and hard, and yes, that’s what she said), so I needed it.  Instead we soaked in the hot tub for 20 mins and chatted with another lady.  That’s pretty close to the level of effort I was going to put in to my workout, so it was fine.

Weights: Decreasing weight by 1/3 makes things seem very light, though two months ago these weights felt pretty freaking hulk for me to hoist up.  I never knew that there could be such thing as a “recovery weights” session, but if there is, this was it.

I really just don’t get it.  I mean, yes, I have food that is not on the good list every ONCE IN A WHILE (and yes I went crazy-pants on my birthday with an epic meal, but it was ONE MEAL), but by and large, I eat cleaner than just about everyone I know.  This week is an anomaly with how small the calorie burn is (since I’m at about half of the hours I train, plus at a way easier intensity), which made the deficit per day smaller, but it still shows I should be making progress.  Perhaps I need to track the amount of weight I *SHOULD* be losing per my tracking, and see how that adds up.  I’m not sure if that would be crazy-making, or whether it would be good for me to know that I am doing what I should.

Maybe I just need to make peace with being hungry for a while.  It’s not something I’ve been accustomed to lately, as when you’re trying to fuel workouts as completely as possible, actual HUNGER is bad, an emergency even.  If I’m sitting at my desk hungry – how am I going to feel about it in a few hours when I’m out on a run burning more?  If I go to bed hungry, how am I going to feel about it when I wake up and have to bike for an hour?  When I was just a gym rat, being a little hungry and underfueled wasn’t an issue.

I was just hoping by cleaning up my diet and getting back on a training regiment would help, but so far, I’ve not made significant progress.

At this point I just want someone to feed me a pill that has the perfect amount of calories and nutrients in it every day, and I want to just train and work and hide away from social situations for a few months and emerge – fixed and at race weight.  Being that this is an impossibility, I have to find a way to fix me using real food, in the real world, with all the imperfections that go along with it.

In March, I’m sticking with this ~1700 calories + some on really heavily active days.  If I’m not at least pushing 180 by the end of the month, I’ll try something else.  Its looking like it starts with veg- and ends with -arian, and it’s one of the only things that’s actually taken weight off in the last few years (coupled with heavy training loads).

I had a revelation while I was working out last week – if I feel like crying and puking and fainting and want to quit and other various dramatics while racing or working on tough intervals, that’s probably where I need to be.  I need to get comfortable being uncomfortable to push my paces faster.  I probably need to do that with my diet as well.  It’s easier to recognize that in the heat of a sprint that ends, rather than in the kitchen, which doesn’t go away.

I better get comfortable with it.  I need to fix me.  I can’t keep gaining 5 lbs a year.  I have not gained 30 lbs of muscle, so some/most is fat gain.  Carrying around a 60 lb scuba tank really set reality in – it was hard to walk with that on.  I’ve gained HALF that since 2009.  I’m set to be carrying around a full scuba tank at this rate if I don’t fix this shit by 2017 at this rate.

But how do you fix something when you can’t find, as they say, in our industry, steps to reproduce?  I have had these periods of success with weight loss since I hit my low of 150 in April 2009:

One is unsustainable with my level of training (and obviously didn’t work long term), and the other is my next step.  I’ve tried everything from calorie cycling to cleanses to getting professional dietician help, and nothing else has taken off any weight.

Other than that it’s been 4 long years of just trying to find something, anything that will help my body synchronize itself at a healthy weight, of which 150 lbs seems to be in my head.  I’m all for the journey, and the knowledge that comes with solving a problem, but 4 years is pretty fucking long to bang your head against something, resulting in utter failure.  I want it solved already.  It’s not the willpower.  Just tell me what to fucking do and I’ll do it – as long as a) you can guarantee results and b) it doesn’t negatively affect my training and is a healthy method of weight loss for athletes. 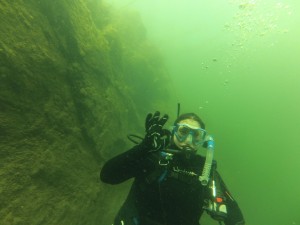 ZOMG this was awesome!  I am now open water diver certified!

I need to talk about this in more length than what I feel like discussing in this post (and we’re already pushing 2000 words), so I’ll just say that it is a magical world underwater and if you’ve ever wanted to learn, just do it.  Take the class, you’ll learn the basics in a classroom, and then safely in a pool before you have to do open water, and it wasn’t even nearly as scary as I thought.  We spent a lot of time on a safe platform about 20 feet down doing skills and drills, but we got down to 40 ft (ok 39, but whatever) swimming around with the instructor and it felt awesome just to glide through the water.

It was pretty murky and there wasn’t that much to see, but that will NOT be the case when we go diving in the Caribbean!

…and we may have been so enamoured with it that we signed up for the advanced class at the end of this month.  Restful stepback weeks be damned!

Here’s what’s on tap for the next two months:

I put together this big long rant that can probably be covered with the fact that I have a lot of (both cool shit as above and responsibilities) things going on in the near future, the whole weight not budging thing as ranted on above, and the fact that I was PMSing.  I really really did want to punch people in the face but it passed with the weekend.  Laying in bed watching bad TV for a while helped.

Last weekend, I got older.  It’s weird.  34 just feels old in a way that 33 didn’t, it’s next stop 35.  At 34, you should probably be a grown up and stop staying up drinking until sunrise and laughing at the phrase “bottom time” in Scuba class and you should probably consider settling down and doing the kids thing and stop thinking about me me me but I really don’t want to do anything like that.

I mean, I’m trying to come into work with a crushing hangover less and keeping my house picked up so it doesn’t look like a frat house and we even got real furniture and my living room looks like a laywer lives there, trying to keep the “that’s what she said!” comments in work meetings to myself, or at least under my breath, but that’s about all I can muster right now.

The triathlon, the scuba, the drinking, partying, vacations, carousing, doing epic shit, hell, having a moment to lay in bed and do nothing every once in a while – this is where I want to be right now.  33 felt right.  34 feels like the party is wrapping up somehow and life as I know it is ending in preparation for 35 and I HATE THAT.  Maybe it’s the character flaw that I’m always wondering and anticipating what’s around that next corner and not just enjoying the now.  I know it’s my choice what I want to do with my life and when, but I suppose it’s that whole societal pressure thing.

Anyhoo – I’ll put a pin in this one.  Last week was a mixed bag full of moody and also awesome, but I’m feeling a lot better this week.  Until next time…

Question of the day: what is your FAVORITE workout or training?  Are you a sucker for pool speedwork, or love the easy, long run?