A day in the new life

I wake up in the morning, shower, brush my teeth, take care of the pets, pack my breakfast and lunch (or not, depending on the day), and go to work.  I still am not yet springing up at my alarm even on 8+ hours sleep, so sleep-a-palooza is still in effect.  Though I do kind of screw that up a day or two each week by staying up too late, there’s plenty of sleeping long, sleeping in, and naps making up for it.

There’s no serious run, bike, or swim before work right now.  There’s not even walk, stretch, yoga, or weights.  No trying to squeeze in *something* in the mornings.  It feels weird still, but I don’t really miss it yet.  I miss the idea of being a triathlete, but when I think about actually doing a real workout session right now my body and mind cringe.  It’s not time yet. 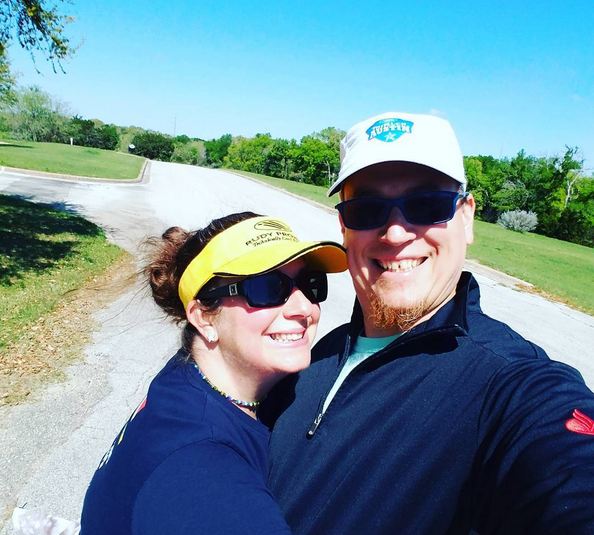 Most strenuous workout so far = 1.5 mile hike around a pretty park.  We hated it.

At work, I am making a habit of having coffee first thing.  I pour a little bit of the real stuff at the bottom of my cup and fill the rest with decaf.  A little bit of caffeine is definitely helping curb my appetite in the mornings without making me wired, since I’m trying to eat less.  I’ve kind of ditched the breakfast rules and have eaten everything from an oatmega bar to half a greek salad, anything filling around 100-200 calories.  I’m finding I’m not dying for food in the morning but by 11 or so, I will get hangry if I don’t have *something*.

We usually go for at least 2 walks a day, one in the morning or at lunch, and one in the afternoon.  Even without training, I’m hitting 10k steps or over about 50% of my days (and generally hitting about 8k on the other days).  With a tiny bit of effort, moving your body 5 miles a day isn’t that hard at all.  Even when I was marathon training, even when I was streaking and running every day, I didn’t always hit 10k steps on shorter run days.  It’s interesting how the body just compensates to keep itself in stasis as much as possible.

I’ll have lunch around 12:30-1pm-ish, and generally something similar to I would have had before.  Today was mongolian grille – veggies, chicken, sauce and brown rice.  Oh, the rice was amazing. When I was training brown rice with just some soy sauce never was so satisfying but I ate that shit up today like it was plate of loaded cheese fries. 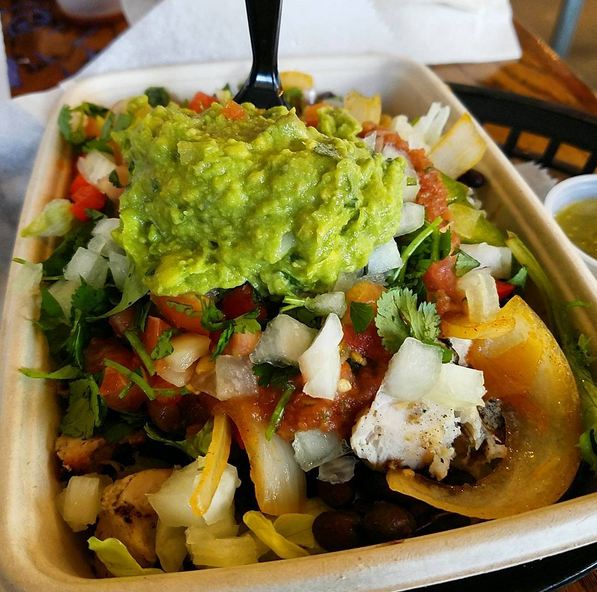 Freebirds salad with chicken, black beans, veggies, and guac.  Something I would have eaten before, maybe with some cheese (sacrifices have to be made sometimes).

The short version of my diet is “I got rid of snacks”.  This is taking a bit to get used to.  I used to eat constantly.  Breakfast.  Mid-morning snack. Lunch.  Snack around 3.  Snack around 5.  Dinner.  Second dinner.  Generally healthy stuff, needed to keep up being a triathlete, but still, lots of calories. I did have to stop for a bit because of my tooth problems. In this interim, I had to find more on how braces could keep my teeth from yellowing.

When 3 or 5 or whatever comes around now, I’ve been distracting myself with a cup of tea, and some gum (and making sure that my water stays full as well).

It’s a little weird to not have training in the morning and at lunch, but we almost always did something after work.  That’s when it’s the weirdest.  We’ll leave work around 5:30-6pm, maybe have one errand, but not always, and then be home, dinner prepared, and eaten by 7pm… and thanks to the time change, it’s still light.

It’s very odd to have evenings free.  Because of this, the house has stayed very picked up, I’ve read probably close to 700 pages in books over the last 7 days, and on nights where I haven’t been stupid or unintentionally dosed with a bunch of caffeine (hello decaf coffee THAT CLEARLY WASN’T), I’ve gotten a heck of a lot of sleep.

In terms of following my plan, I give myself a gold star for the week.  We’re not counting Monday, since it was Zliten’s birthday and we started the next day.  Tuesday, Wednesday, Friday, and Sunday, I ate between 1200-1300 calories.  Thursday was working SXSW for work, St. Patrick’s Day and D&D night, and even with all that I kept it to 1500 calories.  Saturday was birthday celebrations with the parents and some drinks later, and I kept it under 1900.  My fitbit said I stuck around the 1000 calorie deficit all week, and that’s generally where I need to be to see any changes (since I’m pretty sure it overestimates calorie burn, I don’t see any change at the “kinda hard” setting with a smaller deficit). 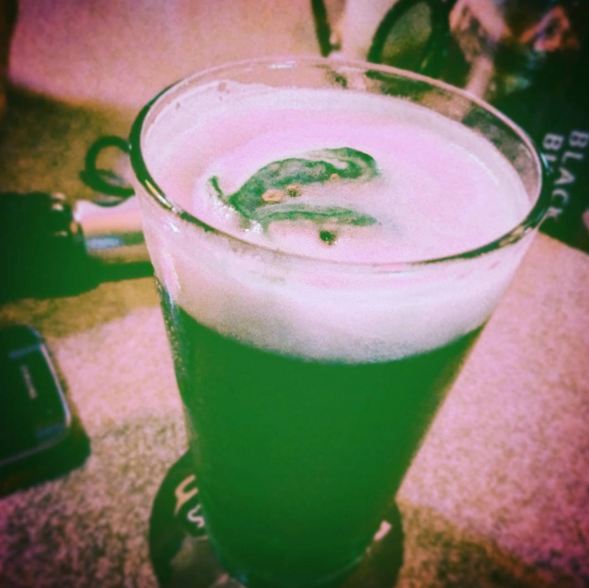 Sometimes balancing the calorie bank + sanity = sacrificing a little bit of true healthiness in the moment.  For example, I ate approximately 1000 FOOD calories so I could enjoy a green beer or three on Thursday.  I counted my giant slice of carrot cake I was served (not my choice on the size but it’s a favorite of mine so I also didn’t turn it away) as my dinner on Saturday.  Occasionally, it’s going to happen.  Believe me, after how crappy I felt Sunday, I’m not going to make a habit of it!

I was actually nervous that I’d be able to hit these numbers again.  I’m very happy I’m on day 9 now, and navigated some potential pitfalls in an acceptable way (and haven’t hated my life).  This week coming up will have challenges as well.  I expect they all will.  That’s just how life goes.

Friday, we’re camping with a big crew of people at the Renaissance Faire.  I’m just going to have to a) not do snacks and bring reasonable healthy meals to cook over the fire, b) pour my drinks with lots of mixers and stick to vodka/diet soda or something like that and c) realize I’ll probably be trekking all over that day so a few extra calorie are probably warranted anyway. 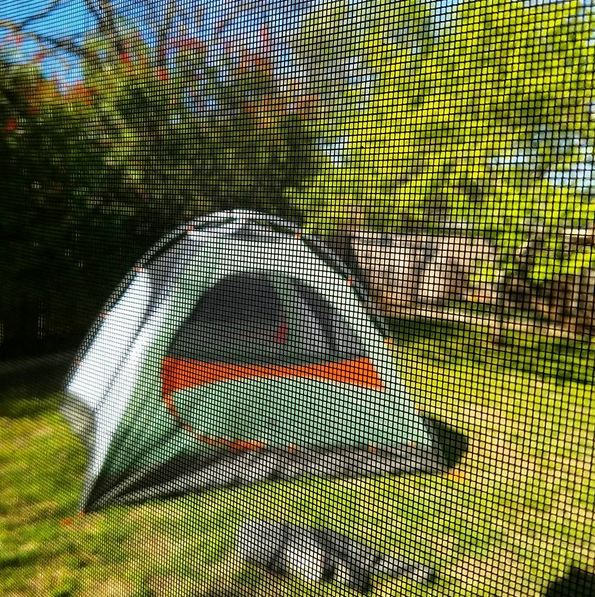 Been so busy triathleting I haven’t camped in TWO YEARS.  We set it up to make sure it still could be a tent.

Sunday is Easter with my family.  My strategy there is to enjoy the feast, but take a small plate for lunch and eat until I’m no longer hungry, not stuffed and bring home some leftovers for dinner.  I’m also bringing cauli-taters and a green salad so I have healthy stuff to load up on and taste the rest.

As for my weight, I stepped on the scale for the first time Saturday, and I’ll continue to do it daily for the data points, but it doesn’t mean anything until about April.  I’m not sad about it, I’m not happy about it, it just is and I’ll let it be until I start to see a trend.

I know my body is resistant to change, so I know that I need to be patient.  I also know this works if you keep at it, so that’s what I need to do.  This shit doesn’t happen overnight as much as you want it to.  Oh man, I really DO want it to though.  Am I at race weight yet?

In my head, I feel like I should be champing at the bit to start training again, or at least start doing some sort of running, biking, or swimming, but I am not at all.  Not in the least.  The idea of intervals or watts or garmins or peak weeks or getting packed up for a race doesn’t spark anything yet.  I’ve rushed myself back into training for a few years now, sometimes under the guise of just going out and doing stuff for fun, and if I want to stay in this sport, I need to make sure I don’t do that. I got myself totally and truly burnt out and I need time.

7 weeks off in late 2012.  The only time I took off in 2013 was an injury… a few forced weeks doing nothing and then doing everything as quickly as I could to ramp back up.  5 weeks off in 2014 summer.  5 weeks off in 2015 (which I honestly probably did way more training for an offseason than I should have).  Every other moment of every other year I’ve been specifically training for races. I suppose I can give myself a break if I’m dragging my feet 2.5 weeks, especially in those circumstances.

The good news is I that found some pretty good joy in a cruiser bike ride around our neighborhood yesterday.  We even went for a walk around the block to close out the sunset and joked that it was the first brick of the year.  I’m pretty hopeful that I’ll get to paddleboard for the first time today, and if not, I’m looking forward to another bike ride.  I’m coming around to the idea of doing some body maintenance, like stretching, rolling, and bodyweight stuff soon.  Not yet, but soon.

While I’ve been hoping to spring out of bed one morning like “ok, my body and mind are completely fixed and I’m ready to be who I was last year at this time again”, I have a feeling it’s not going to happen quite like that.  Instead of diving off the high dive right away, I’ve been sitting by the shore for a few weeks.  Now I’m considering sticking my toe in.  In a few months, I have faith I’ll be all the way in but I’m not rushing myself and letting myself acclimate to the water every step of the way, for the first time in forever.