It’s a little harder to love the outdoors when the heat index is trying to kill you on the daily, but I’m still doing my best. 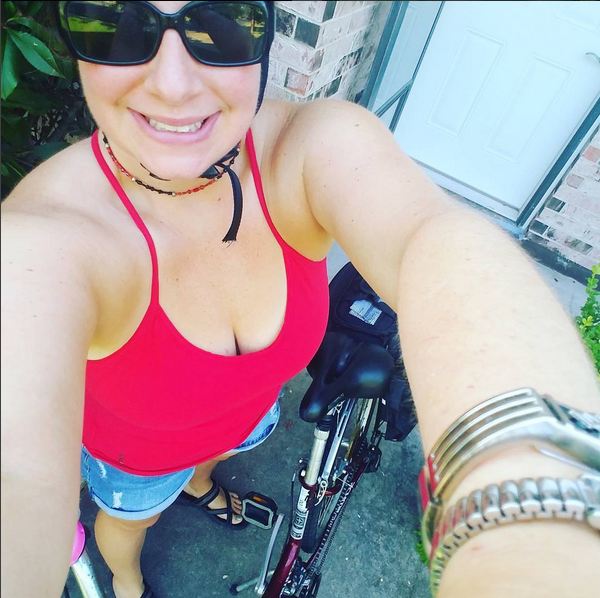 It’s hot as balls outside (right now, it’s feels like 111!!!), but on the bike, it feels… ok.  Until you stop.  Then the heat comes crashing down on you like a flaming mack truck… but the actual biking parts feel great!

I’m pretty sure in 2015, I cycled outside mayyybe 15 times?  I’d have to look it up, but it’s a decent approximation because during tri season I’d make sure to ride outside at least every other week on Saturdays and otherwise I wouldn’t.  Well, I’ve done at least that many outdoor rides in the last month.  Yay bikes!  Yay playing outside! 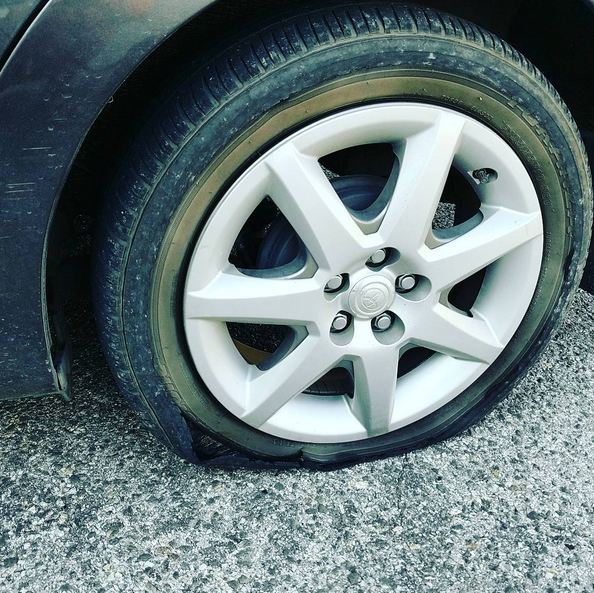 In fact – this happened to us on Thursday, and we’re just getting it repaired now.  We definitely keep a low mileage profile lately.  Shame the insurance doesn’t really give discounts for not driving a car much.  I think their lowest rate was for 10-12k per year.  We don’t usually get half that, in fact, our 3.5 year old Xterra just hit 11k miles.

My fourth of July weekend was pretty badass.  It started with an almost 2 mile swim and 4 mile run under the noontime ball of death.  After recovering from the feels like 102-105 temps on that run sucking down liquids under the AC, we meandered our way into the Texas countryside to a friend’s holiday bash.  That is, after a false start in which we forgot our food at home and had to turn around when we were halfway there.  Oopsie. 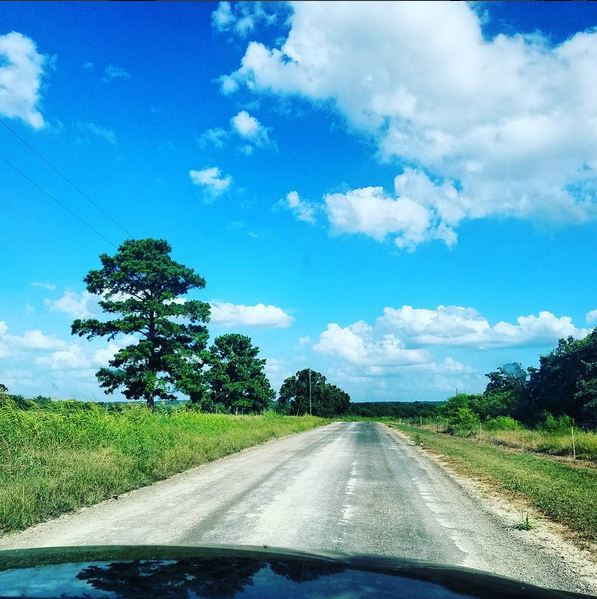 Oh no.  Had to look at these views for longer.  Aw, shucks.

After the mishap was rectified and we got our tent set up, we spent the evening grilling, drinking punch, catching up with friends we hadn’t seen in a while, and tons of time in the pool.  Since we were the most sober ones (???), we got recruited to run “front of the house” (aka, the smaller fireworks like fountains and roman candles) while the other guys put on the big booms further away.  I’ve never done fireworks before, just watched.  It was fun!  We only had a few close calls, and everyone made it out with all eyes and appendages intact.  Success! 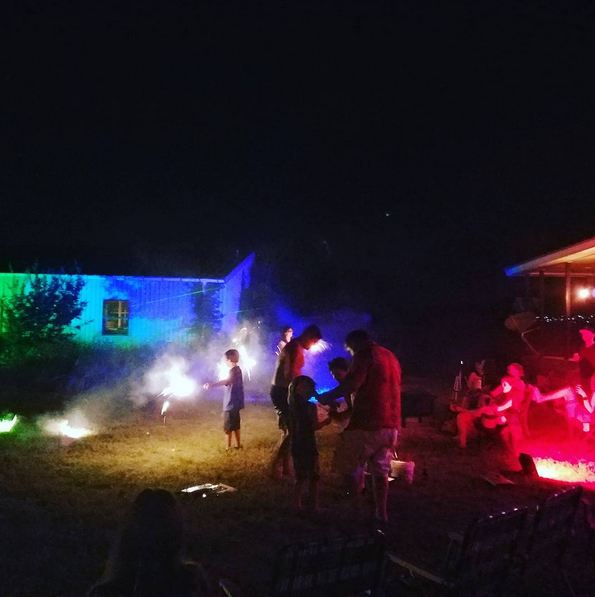 Since I was helping put on the actual show and not snapping pics, here’s some kids (big and small) playing with sparklers before.

We spent the rest of the night playing beer pong, chupacabra dice, and more pool time.  And then holy crap it was way, way too late, so we crashed for a few hours in the tent before taking it all down again, and cooling off in the pool again before we headed home because the weather already wanted to kill us at 9:30am.  Yay Summer?

Sunday and Monday were pretty mellow.  We stayed around the house, slept, relaxed, caught up on class and chores, and other boring, responsible, but necessary things.  However, for the first time ever, we made it out to our neighborhood’s parade and joined in with our bikes. 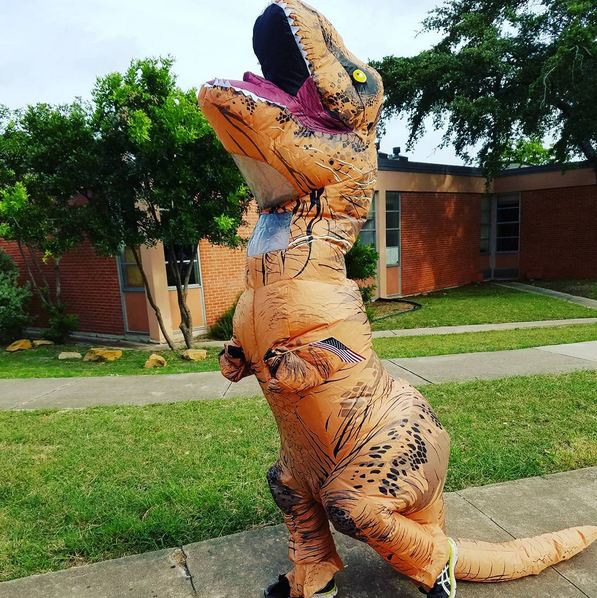 T-rex appreciated that we made it to play papparazi.

Last week was a pretty decent embarkation into an actual schedule.  We aren’t popping out of bed at sunrise or anything, but it’s getting easier to set the alarm with something starting with 7.  Doing the noontime or evening runs are killer, but 1-2 of those shorties a week need to stay on the schedule until I conquer the feels-like-hot-as-balls heat index shit. 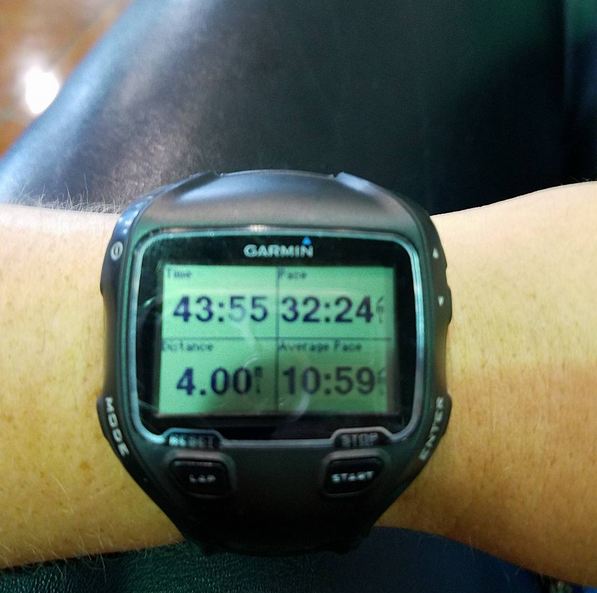 This is what happens when you’ve stopped sweating and start getting goosebumps on a run, but aren’t willing to see 11 min/mile average pace.  😛

Week one of training summary:

Summary: a little less than I had anticipated, I’m missing one 45 min trainer ride on the tri bike, but I commuted twice instead of the once I had planned.  I’m a-ok with 7 hours of outdoor heat acclimation summer goodness.

I’ll probably bike commute one or two of these days as well (maybe Thursday and/or Friday), and with that, it’s looking like about 9 hours of goodness.  It’s a little jump from last week’s schedule, so if something falls off, it probably won’t be the end of the world. 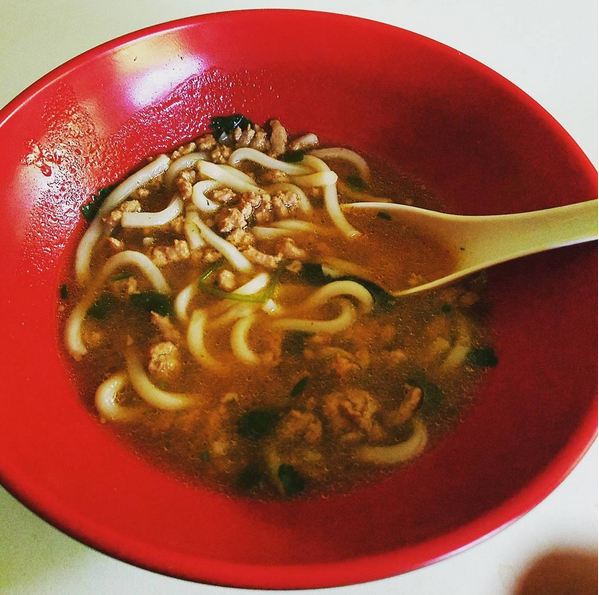 Holiday weekends are always rough to be super healthy awesomesauce, but I didn’t do too badly.

I made a big batch of pasta veggie salad to bring to the party, as well as a lower calorie drink option (vodka, diet sprite, diet juice punch).  I ended up eating a SHIT TON of queso and chips too, but I looked at my calorie burn that day and my -1000 number to hit was about 2500 calories.  Thank you, return to training.  So… I think it worked out okay.

I had some stomach issues on Sunday, and couldn’t keep food down, so while it’s not the healthiest way to maintain your waistline, it did keep me from overeating. Or, errr, eating more than maybe 500 calories of the simplest digestible foods, I’m ok with that not happening again for a long time.

Monday, I ate pretty well, and batch cooked some food for the week and oatmeal fruit bars.  I switched out the fruit for just peaches and used butterscotch chips instead of chocolate, but… they rock paired with some greek yogurt for protein.  It’s nice to have something different for breakfast for a change!

I didn’t actually track my calories (back to it today), but my weight is about where I would expect it to be with that time of the month it is.  If all continues to go well, I predict July to be the month of 170-something, even on the mean white scale.

Speaking of mean while scales, we got some body fat calipers to play with, and while the scale measures me at something stupid like 41% body fat, the calipers have me more like ~25%, which puts me somewhere around the healthy range for females in their 30s.  Which sounds more reasonable.  While I am not a size 0 or anything, I am pretty fit and carry a lot of muscle, and don’t think I’m almost 50% body fat.

This week, I don’t have a whole lot of crazy going out planned, and a lot of good food ready made at home, so I expect it to be a pretty successful week on the “noms” front. 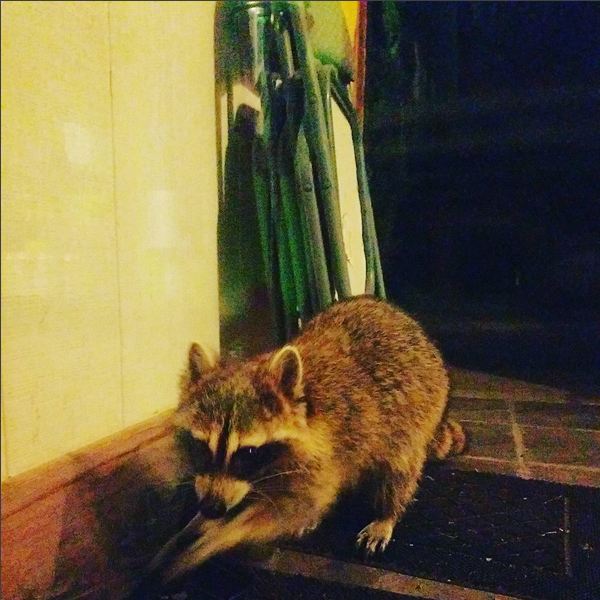 On that note, I’ll leave y’all with our “trash panda” making off with Nacho Cat’s food, and bid you a lovely (short) week!

The Definition of Insanity