I like to write up race reports to capture the moment in time.  However, this one was a little… different.  I can’t really break it off from the rest of the weekend because it was all in the name of IMTexas training.  Also, in and of itself, the race was slow and unimpressive so I feel like I need to qualify it with what was going on all weekend. 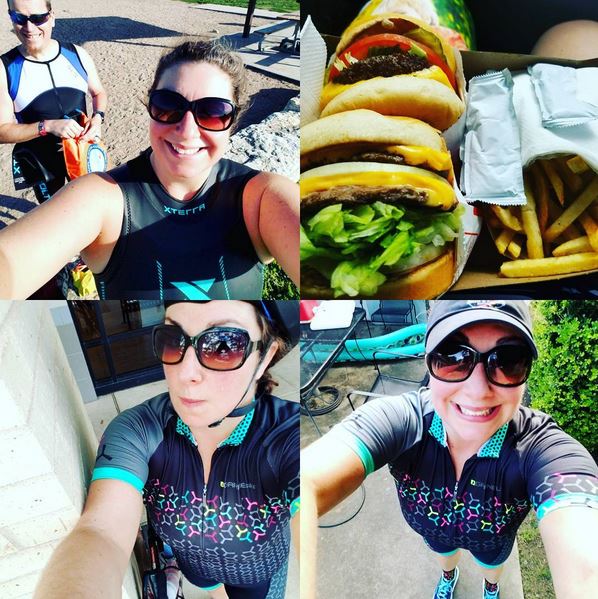 Swim, burger, bike, run.  Not usually in that order…

Saturday morning, we had set the alarm for omg-wtf-early to be out at Lake Pflugerville to swim race-ish distance, bike 40-ish miles, and run around the lake – and in the middle of it, be around to say hi to our tri team doing a newbie clinic at the same place.  The siren song of sleeeeep got us, and we didn’t get in the water until almost NINE THIRTY (oops), and we were gifted with some pretty rough conditions in the lake, caused by 20+ mph winds with 30+ gusts.

I have not had a more challenging swim in my recent recollections.  It was like swimming in a choppy ocean fighting the tide.  I almost quit at least 20 times in the first mile.  The direction of the chop was probably the most challenging part.  I can roll with some side chop, literally by rolling almost onto my back to breathe, but half of each lap was directly into it.  Every few strokes it was so high that I’d go to breathe and *nope* as a wave crashed over me.

My safe swimmer orange floaty thing acted as an anchor going into the chop, and on the way back, it want to be RIGHT BY MY HEAD, so I had to adjust my stroke to keep my arm from getting tangled in the cord.  Not bringing my arm out of the water was incredibly inefficient and took the fun out of the payoff (swimming fast with the current).  I actually intentionally inserted some breaststroke in there so I could actually sight because I often couldn’t see the buoys over the waves.

I wasn’t super physically spent in that 1h45+ to go just under race distance, but I was mentally spent for sure.  We decided to cancel the TT bike ride out there for not just that reason, but it was also borderline unsafe on those bikes on traffic-y roads.  We briefly flirted with a run around the lake but I was wet and cold and over it so we got some In-N-Out Burger instead and ran an errand.

It worked out that we had to be back to pick something up in two hours, and it’s along one of our normal bike routes, so tooled around town on our road bikes instead of banishing ourselves to the trainer.  The wind continued to be incredible, making  downhill against the wind feel almost more challenging than uphill into it, but we got in almost an hour and a half.  Not quite the 40 miles we were hoping, but again, fighting the wind should count for something extra, right?

Because I’m a triathlete, and I also had new shoes to break in, I ran a mile and a half off the bike.  I felt a little knee twinge, and then it went away, but it still made me nervous.  We showered and had some recovery shakes,  ate some dinner, crawled into bed with our books, and set our alarm at wtf-oclock again for the race.

This night of sleep was rather fitful.  Sometime during the night, my knee had convinced me it was broken (ah, tapers) and I was up less with the actual pain and more with the worry that I had 10 miles to run with a bib the next day.   I didn’t want to wreck anything for April 22nd but I also didn’t want to quit.  I woke up and everything seemed to be in working order (if maybe a little stiff), so I got up and did the morning things and we rode bikes 3 miles to the start line. 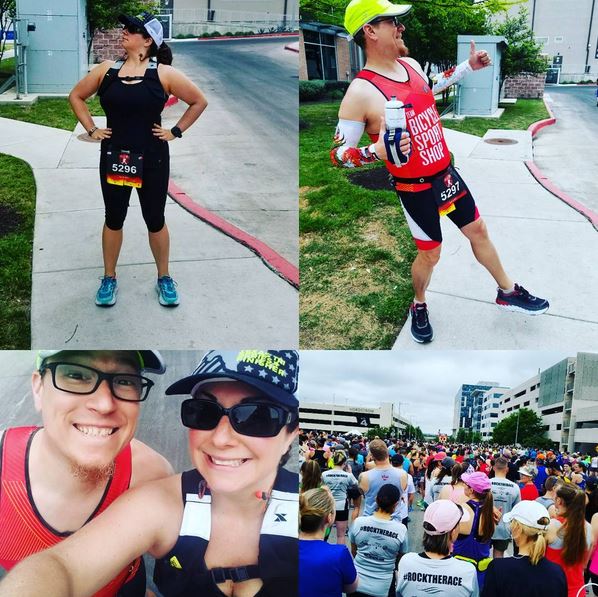 We had originally been prodded to sign up because a lot of our BSS team was racing, but a lot of people dropped out and most of the folks there, we just didn’t connect with.  We ended up seeing our friend Rikki who randomly found us right before the race, but didn’t end up seeing any of the other 10 million people we knew that were there.

The race started late, and an extra 20 minutes of standing around wasn’t helping leg-things so I took off VERY slowly.  I could tell Zliten was frustrated and I told him to go, and he said, nope, he need to go about this pace anyway.  Itold him to give it a few miles, I’ll probably warm up and feel better, and through the first 4, we stayed really easy and I turned a corner (literally and figuratively) and my stride changed and all of a sudden it felt better so we picked it up by 15-30 sec/mile.

This race is awesome for many reasons besides the convenience.  The first 4  years, it was a great place (and a great time of year for my fitness) for me to lay it all out on a flat and fast course and I improved every year by a minute or two.  It’s close to home and work and I run in this area all the time.  I get a kick of running down the middle of busy roads I drive all the time.  There is almost always a band within earshot (the first four years I was hidden in my music trying to PR, so I didn’t appreciate it as much, but the last two years I took it easy and rocked out and it was super fun).  They hand out cold towels halfway through and at the finish, which is always refreshing.

The hill that is always terrible wasn’t that bad (when you’re running easy pace), and then the last half mile uphill into the wind finally got me near the finish, my knee twinged while Zliten was speeding up, so I said “nope, walking a sec”.  A spectator, bless her heart, was trying to encourage me, and instead of explaining the situation I just started jogging slowly again (and it felt fine) and then we crossed the line of the last Austin 10/20 EVAR (unless some political-sounding things get resolved). 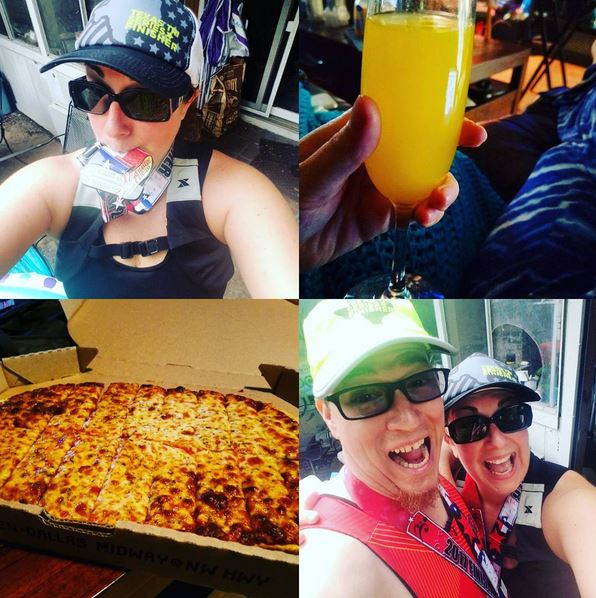 After the race was for putting things in my mouth or showing things where to go (by opening my mouth), apparently.

It was humid and windy and we were dripping during the race and quickly chilled after.  The beer tent had a block-length long line.  The food offerings (rice krispies treat and fruit) were great for a snack, but I definitely was ready for something more substantial.  So, like almost every other year, we skipped out on the post race party and fought the wind home on the bikes and had better beer with no lines, ordered a pizza and watched sci fi movies all day.

Besides the mental energy going into worrying about my knee, I felt a marked lack of tiredness and soreness (and still do today) with over 6 hours of training in the last two days.  I’m taking today off (maybe some weights, but more likely catching up on the chores I blew off yesterday) because that’s in the plan, and I’m super stoked to visit the chiropractor tonight because I think part of the knee issue is I’m out of alignment, but training did it’s thing and taper is doing it’s thing now and life is good.

Four taper problems, and how to keep the crazy in check