Three and a half months after IM day, my body is finally starting to feel like it’s ready to do just a *little* more than play triathlon. 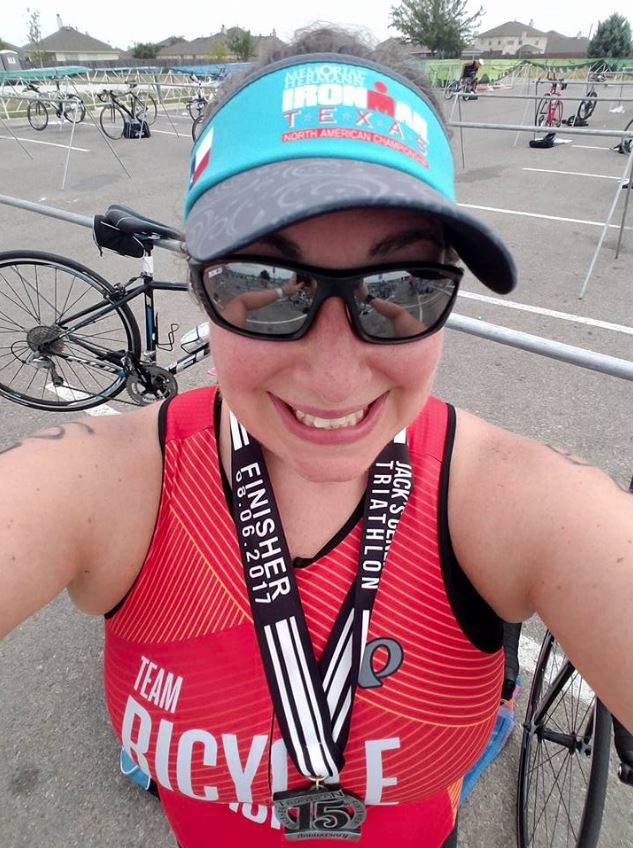 But just a little.

At first I had no expectations, and figured it would just be a repeat of the lack-of-fitness-show in June.  Then, this week, I was able to hold some 8s on my garmin for just a little while on a run, and my brain clicked over to perhaps believing that there was maybe possibly something in there.  But still, no expectations.  Because half a mile at 8:24 and 3 miles on gravel after killing it for 40 minutes on the bike are definitely different animals.

I pretty much did the normal stuff the day before.  Panera for lunch, a movie (Valerian – it’s super fun – go!), a pre-race swim, packet pickup, and then we picked up meats from Stubbs for dinner to go with mashed potatoes and veggies. We also received a couple of packages from some custom hat manufacturers that we’d bought some hats from. We were on our feet a *little* more than we would for a B or A race and finished up some chores so we could completely relax after the race. 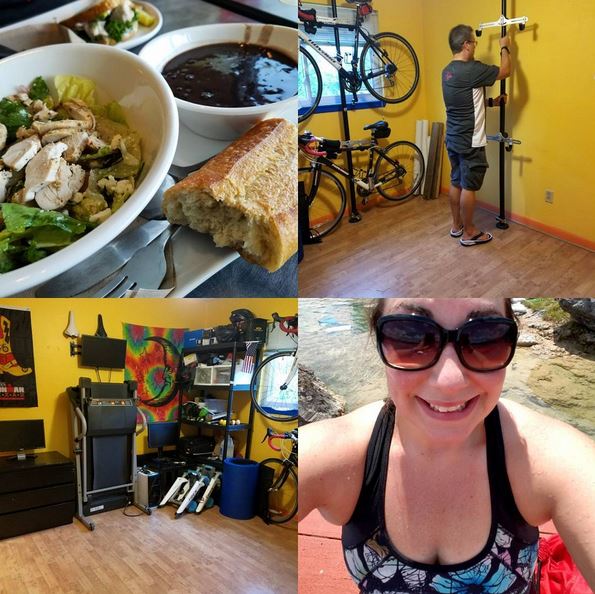 Saturday was an awesome day and also it enabled us to completely slack on Sunday after the race without feeling guilty about it.  Win!

I didn’t sleep amazingly – fell asleep around 10-10:30, and woke up from about 12:30-1:30 for absolutely no reason.  5am came pretty early but after some green tea and peppy music, I felt pretty great.

We got to the venue a little later than expected and ended up parking at the end of Egypt, but luckily we had our handy dandy cart to haul our gear and BSS had a team tent at which to drop off our non-transition stuff.  We did the quick version of setting up transitions, skipped the warmup run due to time (would have had plenty of time if I had a second pair of shoes, which would have been NO problem with the team tent, I’ll remember that next time).  We hit the porta potties and missed the 3 minute window for the warmup swim.  0 for 2 on warmups.  Oh well.  I probably walked a few miles that morning, and that’s plenty fine for me.

After cheering EVERYONE ELSE into the water, I lined up with the caps that were my color.  I thought I was in the first third, but after people filtered in from the sides, I was probably bringing up the last third.  D’oh.  Also, as it was my turn to go, I realized I didn’t have my watch set for multisport, so I ducked behind a few more people and got it set up and then I was running into the water like I was on the set of Baywatch and my race started!

My lack of paying attention screwed me here.  I ended up running into the water and passing people before I even started swimming.  Then, it was just like body body body bodies everywhere.  And a lot of them were either not swimming even remotely fast or breast stroking or side crawling.  Yes, it was totally my fault for not having confidence in my swimming abilities and also not paying enough attention to the lineup, but it sucked to be dodging people doing the backstroke before the first orange buoy.

Once things cleared up a bit, I felt like I was doing alright, just about like I had at Lake Pflugerville, but I looked at my watch about 2/3 through and it was 8 minutes in.  Not great, but I was finally going with the current so I didn’t worry about it.  Then, I got caught behind a gaggle of really slow swimmers near the exit chute and I was actually literally stopped for a while waiting for people to move.  That sucked, but there was no way around except REALLY wide or over people, and I’m just not that much of an asshole.  I took it as some time to breathe and rest, but it really did tank my swim time/pace.

Not my absolute worst here but definitely sucks that I was a full TWO MINUTES slower than last year.  For the record, my garmin registered almost 600 yards, which is 2:15/100m which is more like what I felt like I was swimming.  Seeing how much I had to dodge people, I’m really going to blame my positioning for most of it but some of it admittedly was fitness.

In summary, I need to have confidence that my swim is better than I think it is relative to other people and also it’s time start doing sets and drills in the pool again.  For realsies.

Because I was so… rested coming out of the swim, I actually PR’d my T1 at this race.  At this point I really think the only way I could get much faster here is to improve either my actual running speed or the speed I’m comfortable running barefoot.

The aftermath.  Barely got down any liquid, but that’s probably ok on a ~40 minute bike.

And then I got to the mount line.  And there were literally 20 people crowded there trying to clip in.  My sub-par swim, starting so far back, and being in the last wave had messed up my positioning here too.  I’m not the best clipper-inner, but I’ve been getting better so I confidently walked one step over the mount line on the LEFT side away from everyone, clipped in easily, and then went about dodging everyone else wobbling away down the street.

After the swim, I was not about to get stuck behind people.  I tried not to be a jerk about things, but I had this song in my head by mile .5 (with the lyrics “all I do is PASS PASS PASS no matter what”).  The great thing is that it’s a huge confidence boost to zoom past hundreds of people in the first few miles and get passed maybe 3 times by dudes on the Olympic with 7% body fat on bikes that cost twice what mine does.  The not-so-great thing is that it was due to my placement, not my awesomeness.  The worst is that I spent probably half the first five miles over the double yellow line.  Sorry, but I’m not sorry.  I wasn’t the only one doing it and there was no way around it.

After fighting the wind and crowds, there was a nice tailwind section where my speed climbed and climbed and I saw 20 mph average right as we turned back into the wind up a hill.  I decided I my goal was to keep from losing more than 2 mph as long as I could without spiking my heart rate too much.  We got one more nice tailwind down a hill (wheeee!) and then turned into a wall of wind (ooof).

I got down into aero as teeny tiny as possible, and then found the BIGGEST guy going right about my speed.  I did my best to stay legal on the crowded course, but I’m convinced I still got some drafting benefit even the required 5 lengths behind with his size.  I wasn’t keeping the 19-20 mph I was before but I was holding 16-17, and slightly uphill and into the wind?  I’m happy with that.

My garmin read 18.5 mph average on the actual moving parts once I unclipped and rolled into transition, and I will absolutely take it.  I felt very confident and capable on the bike, even though I’ve only ridden it twice inside since the last race.  Not my best on the course but I think my second best.  One of these days I’ll crack that 20 mph average, but maybe not at Lake Pflugerville for a while with the hills and the wind.

Luckily, it was not as crowded on the way back into T2.  I did my thing with the quickness and was out on the run with no fumbles.  Best here by 6 seconds!

I got out and running and… while it felt terrible it didn’t quite feel as terrible as last time.  I didn’t want to concentrate on pace, I just wanted to concentrate on quick feet, like my really great run on Friday, so I switched my watch to my cadence and heart rate screen.  It stayed at 176 (88 cadence) and 172 HR and I just could not shove it up any more. So that’s where we lived.

The first mile ticked off at 10:53, and while that in and of itself was not terribly impressive, it was about a minute faster than the first mile six weeks ago and my legs felt significantly less like lead bricks.  Someone in my age group passed me and I considered trying to go with her, but she was moving VERY quickly and I just didn’t see it happening.  Yet.  Maybe by Kerrville I’ll have the mojo to run someone down again.

The second mile was about the same as the first and then all of a sudden we hit the wall of wind.  Again, just like the last race, I felt I was running standing still, but with signficiantly better stride.  I knew the wind was rough when my last mile was the slowest paced.  My garmin showed the course SIGNIFICANTLY short, but my Garmin also has a habit of sandbagging me, so I’ll say while this definitely was slower than 9:58/mile pace, it probably wasn’t the 10:56/mile my watch showed.

One day we’ll get a full team picture.  This was not that day.  Photo care of team captian Claudia!

Here’s the skinny.  If you want to bump up your placement, get better at the bike.  The average of 20+15+7 is certainly not 10 but since I did well on the bike, that’s where I placed.

Also, there was some majorly stiff competition.  I would have needed to place 10th OVERALL of 186 women to snag third in my age group.  I placed 43rd, so top quarter, at least!   I was in the top half overall both genders.  Oddly enough, if I would have stepped up and did the Olympic, I’m pretty sure I would have snagged 3rd out of 5th in my age group, from times that I’ve posted recently.  Ah well.  No regerts, right?

I’m definitely not back at peak form but I’m showing improvement.  And that’s what’s important.  I’m going to stick with my bike focus, because it seems to be both improving my bike and also improving my overall endurance without all the pounding of running.  I’m also sticking with playing Dance Dance Revolution plyometrics because it seems to be helping my running form. 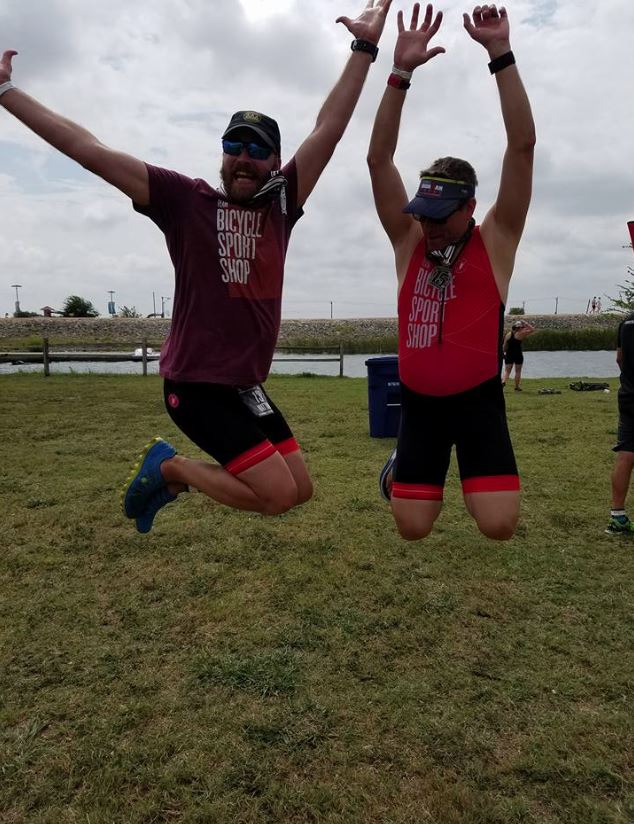 Obvs, these guys do not need the plyometrics because they have the HOPS and also they both had pretty great days!

While I’d like to actually run more, I think it may actually be helpful to run less and let my legs forget the marathon shuffle.   I have run almost nothing (about 22 miles) in the last six weeks, but I improved my run by over 2.5 minutes on the same course.  And, swimming.  I have no idea why I’m not into it right now, but one sport has to be the red headed stepchild, and I’m sorry, swimming, you’re it.  I really do need to focus a bit better when I do get to the pool, but at this point, I’m going to ride bikes and hope for the best.

Super thanks to all my Bicycle Sport Shop teammates, it’s always a blast to race with you!  I mostly signed up for this race because FOMO, and had a pretty solid day.