I finally dragged my eyes open at around 8am, which was unfortunate, as we had envisioned getting on the road closer to 7 or 7:30.  I rolled over and texted my Mom, “Woke up late, story of my life, will be there closer to noon-ish.” 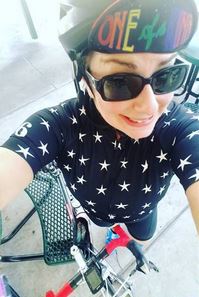 One of a kind and always late…

Most triathletes, cyclists, and all around sporty-spice people are early risers.  I have friends who often end their runs before the sun comes up.  I am in bed until the sun comes up unless it’s an absolute necessity.  I’ve gotten to points where I have regularly been able to wake up in the 7am hour, but as soon as I take a break my normal body rhythm goes directly back to waking up as close to 9-10am as I allow it.

My husband and I both plodded out of bed to do our respective pre-bike things.  This morning, since I was groggy, I pretty much walked around in a fog forgetting how to be a human, and he did just about everything – filling our bottles, finding the helmets, and pumping up the tires.  We trade off being the one who can actually function before noon and today was not my day.

Finally, we had all our ducks in a row and coasted out the driveway a few minutes before 9am.  The air still had a little refreshment in the wind gusts, in the shade at least, but I could tell that would be short lived.  Our neighborhood was still pretty sleepy itself, with just a few people setting out to take their dogs for a morning stroll, and traffic seemed to be following suit.  It’s a refreshing change from 9am on a weekday, when everyone out and about is cranky because they’re probably late to work, these people are most likely out to start a day off of shopping, or brunch, or something somewhat enjoyable.

We were heading north that day for two reasons.  First, our plan included an 80 mile ride, and my parents’ house is exactly 38.5 miles from ours.  Second, Austin City Limits music festival was downtown (about 10 miles the opposite way), and with the thousands of natives and visitors partying it up down there… you either go embrace it or stay the hell away.  Since we weren’t doing the former, we wanted to avoid it like the plague. But unfortunately, we’d heard of the rare gifts on sale in that very pageant, and as the adage goes, curiousity kills the cat…or should I say, cats.

To go north from our neighborhood, there are two decent options – either up Metric, which has hills but they aren’t steep, or up Steck-o-slavakia (as the Strava segment calls it), and you get the climbing done with straight away and all at once about a mile and a half into your ride.  Metric is the most direct route, but Steck leads to Rudy’s breakfast tacos, so of course, that won.  We huffed our way up and meandered through streets and parking lots until we turned into our favorite bike breakfast place.

Here’s the thing.  I eat pretty healthy most of the time.  However, I’ve made the agreement with myself that anything I eat during a bike ride doesn’t count in the grand scheme of things.  The bonus of this?  I can now eat almost anything on the bike.  Real food is so much tastier than dumb old gu gels, and I knew the time for those would come later, so I enjoyed the heck out of the peppery bar-b-que sauce, salty beef, and soft warm flour tortilla.  I enjoyed it quickly, because, as we slept in, we were behind schedule.

Because Jollyville Road is essentially the northern bicycle promenade area, we saw at least three other group rides coming or going.  Even if we were riding solo ourselves today, it was awesome to be part of the haphazard mid-morning cyclist’s parade.

Eventually we turned onto Parmer Road, which ended the point of the route in which we needed to pay attention to directions.  Get to Parmer, go straight for 30 miles, that was it.  Easy on the brain, except when you turn into it and WHOOF the wind hits you.  “Nothing as bad as Ironman day,” I thought, and we started our trek north.

Sometimes cycling is filled with amazing sights and sounds and fresh country air.  Sometimes you pick the most convenient route, and the sights are cars, roads, and more cars, the sounds are horns and road noise, and the smells are dead armadillos and skunks.  Either way, the sun was shining, we were outside, and riding bikes, so life wasn’t so bad.  We ate a gel, we stopped at Sonic for a Powerade bottle fill, and while the traffic thinned out, the weather took a turn for the steamy, and the constant construction started. 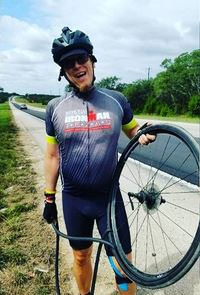 I know that the crews were probably much more pressured to make progress on the driveable parts of the road, but the bike lanes were a mess for miles.  Often, they had deep grooves, were blocked off, had loose gravel spread over them, or had tons of debris.  Even with the obstacles, we were making good time until two miles from our turn, Zliten told me to stop and we examined his mostly-flat tire.  The construction debris had claimed a victim, and whatever it was put a decent size hole in his tire as well as flattening his tube.

You know what makes the best tire patch? An empty GU wrapper.  And I had one, sticky and ready to go.  We patched up his tire, well, he did as I watched and gave moral support, changed the tube, and we were off.

As we pulled into my parents’ driveway, the clouds really started to roll in.  It was right about noon (without the flat, we would have been a little earlier, which may have been the first time in my life), and my bottles were empty, so it was nice to get some water, snack on some fruit, soak up a little air conditioning, and chat with the family for a bit.  All too soon, it was time to head out, back on our steeds, and get to the second half of the ride.

Thankfully, the clouds continued to layer themselves on top of each other, and most importantly, the sun.  We made a quick stop at the Sun City gas station, for a really expensive-but-totally-worth-it Gatorade to fill our bottles, and we looked at each other.

“Ok, let’s go home!”  I exclaimed, as if home was not 40 miles and a few cities away.  The great thing about an out-and-back route is you already know what you’re in for.  The wind, thankfully, was mild but mostly at our back.  The construction wasn’t as bad on the other side of the road (bad, but not that bad).  The clouds held their cottony-soft selves together, for the most part, and kept the sun from frying us too much, and the hills that were killer two months ago just didn’t seem that bad.

Once we returned to civilization, we stopped at McDonalds for more fuel – I got a cheeseburger and split a medium fry with Zliten, who got some nuggets.  It was not the best burger I’d ever had in my life, but two packets of salt went on the fries and my not-a-happy-meal-because-the-toy-sucked did it’s trick.

Some people may wonder how we spend hours and hours on bikes.  I like to say it’s quality time, but honestly, before the last month, it was quality time but also a lot of shouting at each other because it’s hard to hear in wind and traffic.   I was extremely happy that my husband is impatient with gifts and we’ve had our anniversary present, always on walkie talkies that attach to our helmets.  At first, I thought it was kind of silly, but now I don’t know how I got by without them.  Having reasonable-decibel level communications makes bike rides with my husband about 80% more happy.

As we turned off Parmer and back into town, I found myself almost sad that our ride was coming to an end.  Two years ago, I can’t imagine anything but being overjoyed that I could stop riding on the road because it was terrifying.  A year ago, 80 miles was well beyond my comfort zone.  I rode 74 at a charity ride, which was the longest I’d been on a bike at that point, and I was pretty shell shocked after.  Today, this ride was a long training ride for sure, but totally within my capabilities.  Putting together 20 more miles, or another hour and change (our average pace ended at 15.7 mph), did not seem beyond our capacities.

About 4 miles from home, we heard shouting out of a white Jeep.  “Uh oh, cyclist haters…” I thought, until I recognized them yelling our names.  It was two of our teammates!  I think I realized in time to wave, but I was so focused on getting home.  As I did mental calculations, I realized the small shortcut we took earlier was going to short us on miles.  I’m not a complete stickler for even numbers, especially on the bike, but the longest training runs/rides?  I like seeing the number!  So, we meandered around the streets surrounding our house and finally pulled into the driveway, both of our garmins reading eighty point something.

There’s an order of things after a bike ride.  Usually, it’s worthwhile to go directly to the shower.  You’re sweaty, smelly, and gross.  It’s worth the five minutes to get clean.  Then, liquid.  Both hydrating (water) and dehydrating (beer).  Then, food.  Even though we had reservations at Trulucks for the second part of our anniversary day in two hours, the half turkey sandwich in the fridge didn’t stand a chance.   Then, the couch and some TV.  And more water.  And beer.

I was dressed up for all of two hours before climbing into my PJs.

Fifteen minutes before our reservations, I pried myself off the couch and made myself look presentable, and we had a super relaxing, super nice crab (and butter) feast.  We considered lingering at the bar after, but our drinks at home are just as good and cheaper, so we were home before dark.  Such is the wild life of a triathlete.