The big biking goal for the year was Hotter’n Hell 100.  Done and dusted. 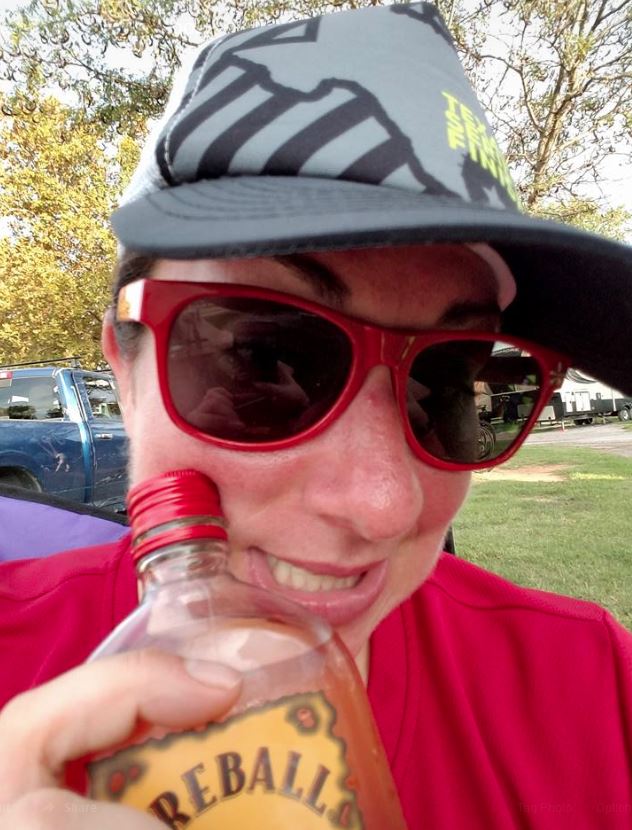 Been there, done that, spent the night, got the sunburn.

Then, we saw a really great deal (something like 65% off) on another century later in the year on a week that we were available, so I figured it would be motivation to keep riding my bike longer in the beautiful fall weather. However, we’ve alternated between hot and rainy and unseasonably chilly in the mornings, so this mythical unicorn weather has mostly eluded us.  However, our 80 mile ride two weeks ago was pretty amazing, and there’s NO WAY I would have done that unless I was training for something.  So, no matter what, I’m glad we had this on the calendar.

I also thought it would be an interesting experience to fund raise, but apparently when you just ask twice on social media, that doesn’t exactly cut it and we raised approximately 10$ collectively (or my husband raised 10, I raised 0, ahem…).  I suck.  Cancer is not going to get cured because of me.  Sorry.

The day before the race was largely uneventful – we hit packet pickup, had a nice swim at the just slightly below 2:00/100m my offseason pace seems to be settling at (which is just fine), and had lunch with a friend and ate all the things we normally eat and got to bed at a decent hour. 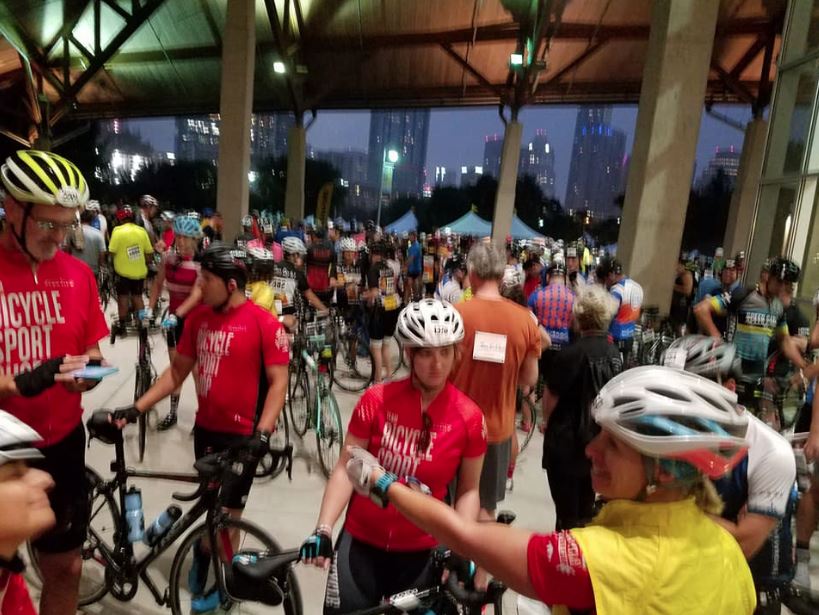 My view for about 2 hours Sunday AM.

We got out of bed around 5:40am, drank some tea (earl grey, hot), ate half a sunbutter+jelly sandwich, and drove downtown.  We half thought about riding there but thought that tacking an extra 20+ miles on a century would have been ridiculous, so we skipped it.  The plan was to park at Pure Austin, but they have new signs up saying “2 Hour Parking”… so we joined our teammates at the BSS store and pulled in just in time to see everyone roll out to avoid the impending rain.  Which was now raining on us.  Oops.

We became drowned rats on the way there, and spent the next hour and a half huddled for warmth under the sheltered area at the Palmer Events Center as they continuously delayed (with good reason) the race 30 minutes, then an hour, then an extra 15 for an 8:45am start.  While it was the right call, it did not make me happy.  First, I doubted they were going to extend the cutoffs, and we were already going to have to watch our aid station times to make sure we were well within them.  Second, standing (especially in cleats) makes my body hate me. 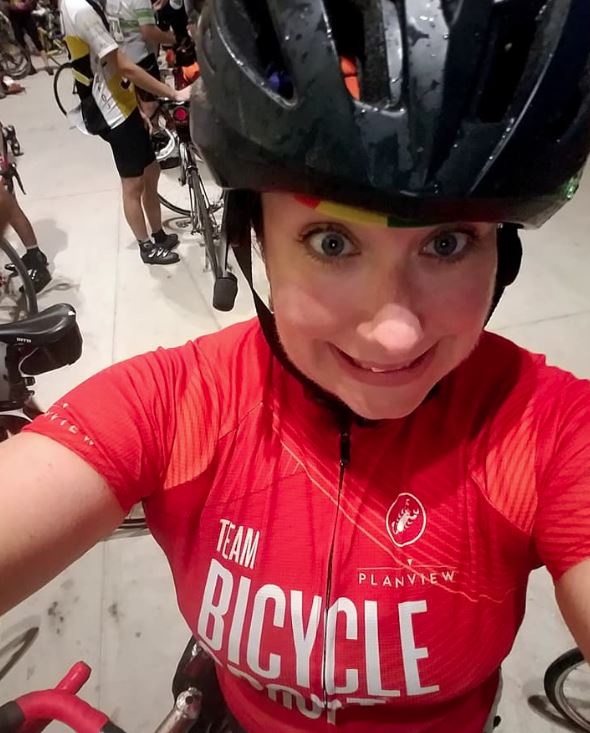 Hi, I am drowned rat!  Nice to meet you!

Finally, the rain started to let up, and we got staged and crossed the line right around 9am.  We started back with the rest of our team and the 65 milers.  I hadn’t 100% yet given up on the 100 miles, but, as I told Zliten as we rolled out, I had was about 80% there and we’d see how things went.

Then we got to doing some cycling, finally.  It was super fun to ride with the team for a while, and apparently we got props from people calling us super safe to ride with (we were screaming and pointing at holes every 5 seconds on South first because it’s habit to do so).  However, my legs just did not want to warm up quickly and they got a little ahead on some of the hills.  We passed them at the aid station but they caught back up and we rode together again for a bit.

Around mile 15 Zliten’s wheel just started clicking.  Click click… click click click…. click.  It was a little… concerning… so we stopped on the side of the road to check it out.  Nothing appeared to be out of the ordinary so we click clicked to the next aid station to try to find a bike tech.  We did NOT find one there, but we did find an old buddy of ours and we chatted a bit while we snacked. 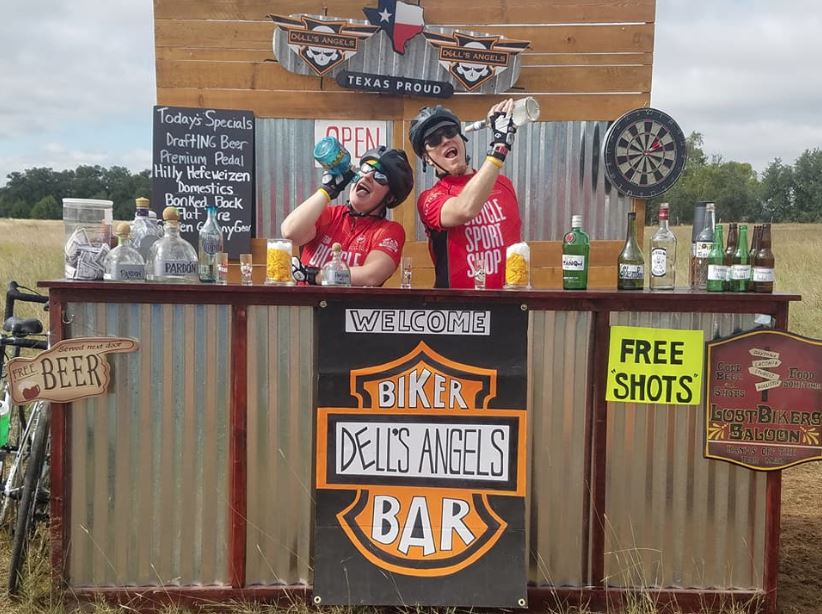 Best aid station of the day at approximately 30 miles.  Sadly/luckily, no actual shots were available for consumption. 🙂

Click click click sort of wore on us after 20 more miles.  My back and legs were unreasonably sore for the distance I had ridden. I typically feel this way closer to 80-90 these days (I blame standing in cleats for 2 hours).  The wind was WICKED.  I had no info about if they modified the course closures and the last thing I wanted to do was have to SAG it out, so when the sign came up at around 38 miles to go right for 100, I took a left towards the 65 mile route with no regrets.  I felt crappy and my mood wasn’t great either.

We found out later that they turned everyone back for a maximum distance of 77, so I’m torn between feeling bad that I didn’t at least try, and feeling fine with my decision because I couldn’t have done a full century anyway.  Definitely, mostly the latter.

After making peace with our decision we stopped at the next aid station.  They had bike techs!  Zliten got his steed looked at (yep, spoke out of place, just a little, fixed it right up) and I found some delicious foods and laid in the grass, enjoying the warm sun and a little break.  The break was exactly what I needed, I felt much better and instead of letting my husband pull most of the time, we took turns again.

All of a sudden, we were back in town and in traffic.  Bleh.  I’m sure starting and ending downtown is great for many reasons, but I did not love having to stop at almost every light on a very busy street for about 5-10 miles on the way back up South First.  I would have much rather had the route be more of the beautiful country roads we were on before!  Also, can I complain about the myraid of left turns in this route (on streets that were not blocked off)?  I’m not sure why we didn’t just ride it backwards so we went clockwise and they were rights instead.  Two years ago, I would have been terrified!  Now, it was just… annoying. 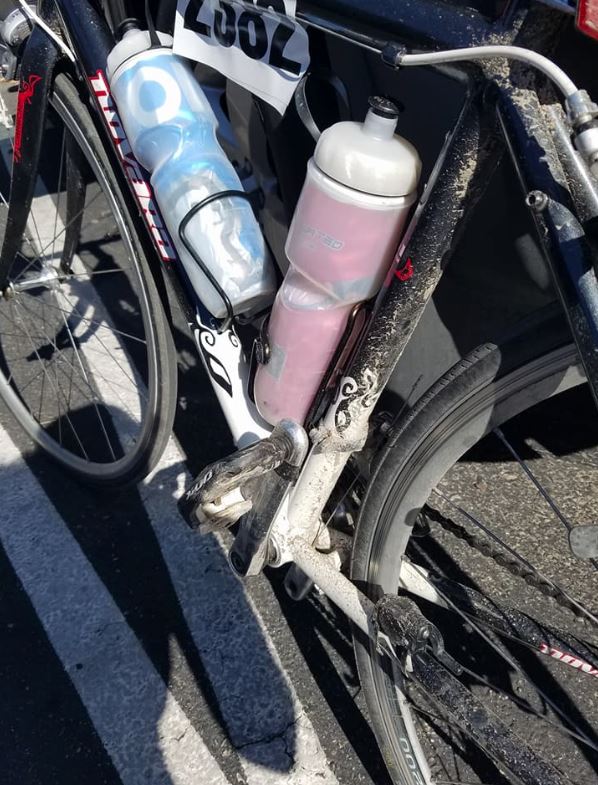 Poor dirty Evilbike.  She had a bath the day before and everything! (and obvs, a bath Sunday afternoon as well, approximately an hour after this picture… :P)

We crossed the arch, happy to be done but also feeling a little underwhelmed with our day as we had expected to ride 100 miles and just be exhauuuuuusted.  A beer or two with teammates and friends definitely perked us right up.  They had amazing looking food (both a taco bar and burgers!!), but we had a jalapeno and chorizo pizza at home beckoning to us, so we saved ourselves for it (and it was so freaking worth it!).

The positives of the day, because I feel like I complained a lot above: 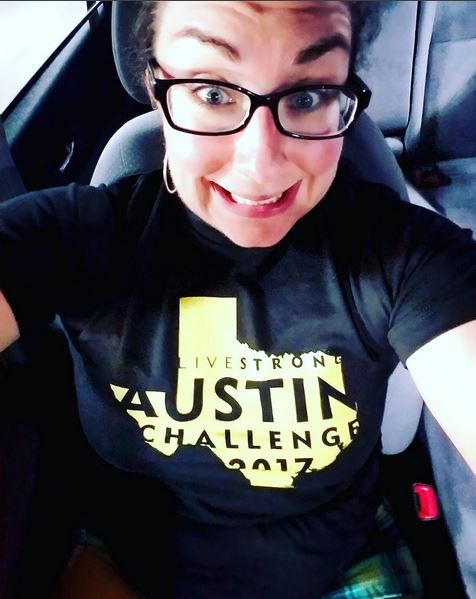 The verdict?  I wouldn’t go out of my way to do this race every year, but if a bunch of teammates signed up and it didn’t cost too much and didn’t have alternate plans that weekend and maybe someone could have a chat with the weather for a low around 60, high no higher than 80, and a mix of clouds and sun but no rain?  In.