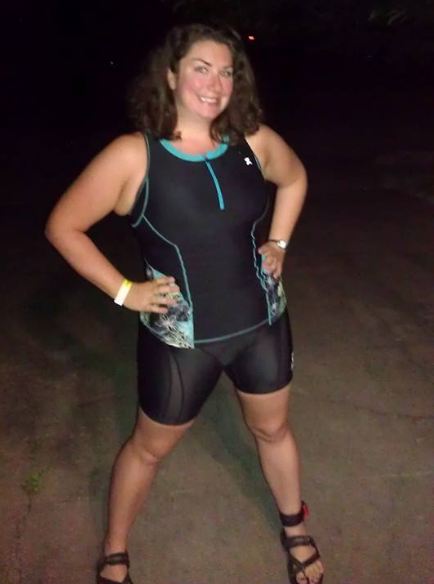 This triathlon was a breath of fresh air.  At the end of the season, I had trouble getting really excited or inspired for races.  I had all these expectations, heavy with a season of training and fatigue, and even when I had a pretty darn decent race, I felt disappointed.  I was lucky to end my season on a real high note, and go into offseason feeling blissful, redeemed, satisfied…

…but then there is a whole uncertainty about taking 5 weeks off.  I mean, I ran 6 miles a week and did some weights (that was my one offseason homework assignment to myself).  I biked ONCE because I wanted to watch the tour de France and it felt wrong to do so from my couch.  I did a lot of laps around the lazy river at the water park and splashed around in the ocean a lot on vacation, but I didn’t swim a yard in a pool or a lake.

I felt like an idiot signing up for this one, the week I came back to training.  Why would I do this when I’m obviously not at my full potential?  I’ll probably be exhausted from trying to get back in the swing of things.  I’ll probably just be overwhelmed after this at all the work I have left to do in 8 weeks to put in a good effort at Kerrville.  And… this race and I do not have a great history.

The goal of last week’s training was to just do enough to feel like we were back into it, but stay fresh for the race.  Ran 10 miles, did 45 easy miles on the trainer, and swam twice in the lake, for about 1.5 miles.  I felt good, my legs felt fresh, but I was really uncertain about what I had to give.

The swim was changed to an out and back because of major hydrilla overgrowth (they had gone in with snorkels and machetes and cleared a path for us, how nice).  It was a time trial start, so when it was my chance I ran in, dolphin dived (sorta), and started passing people.  Sighting was a challenge, and it was harrowing being worried about getting in a head on collision.  A sprint swim always feels like I’m just getting started when I get out.  Swam until I touched fingers (almost ran into a volunteer), swam a little further, then up, out, and across the beach I went.

I felt like I was swimming decently, and while this time in and of itself is really, really slow for me, this also includes a fairly long beach run.  There was a question of whether it was a little long too.  Whatever.  I’m happy with it.

The normal Pfluger run from beach, around the path, down the stairs, to transition.  The difference is that this time it was NOT open racking, and I was pretty much on the opposite side I like to be on (very close to swim in, far from bike out).  I did my thing and clip clip clip clomped out, mounted, and was on my way.

A little longer than I’d like, but the whole clomp clomp thing across a whole parking lot.  Someday… I’ll do the shoes in like a pro.  Someday… 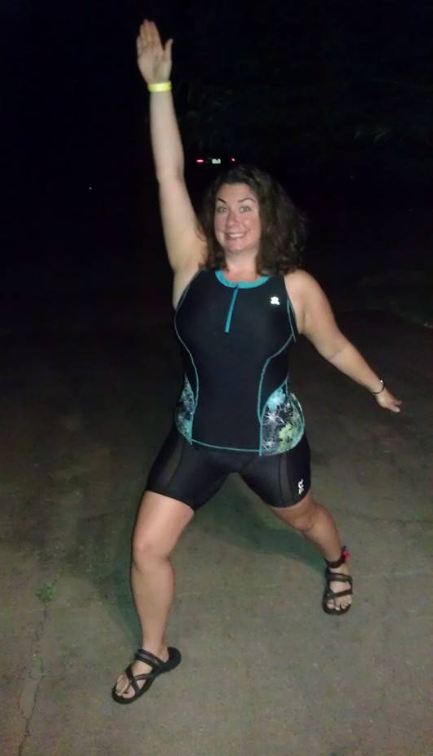 I had ZERO expectations for this. But, I got riding, I was feeling good, keeping high cadence, and I just decided to smash myself as best I could. I just wanted to see what was in these legs, and damn the run, I’d get to that when I got to it.  And I actually had more than I expected! I maintained over 20 mph the first 2 miles, over 19 the first 4, and then I hit the wind.  I spent miles 4-10 fighting the wind, the hills, and dodging the noobs on the mountain bikes riding in the middle, and trying to stay out of the way of the dudeholes on their zipp wheelies, I slowed to 18s and then 17s.  The miles ticked past quickly even though I was pushing myself, I did my best just to hammer.

I lost pace all the way to 17.1 mph but knew I’d get some love soon.  While Pflugerville wind sometimes blows at you from all directions, this was not one of those days. Once we turned and got the tailwind I breathed a sigh of relief to not be fighting the wind (and got some nice flat miles), so I saw awesome paces like 23 mph, and I just kept cranking.

I did make the mistake of tucking in behind a slow guy too early, and had to stay there so I didn’t make a dick move to dart out in front of him right before rolling into transition.  While I wasted a few seconds there, I was hoping it would help my legs on the run, having a quick little break.

I kept the exact same pace as the last race on this course – when I was primed for racing, and even specifically training for shorter courses. I can’t even… I’m just thrilled.  I did the BEST overall in the bike course when I expected to do the worst.  Rested legs for the win!

…and I beat this guy on the bike.  He normally eeks out a few MPH more than me (at least short course, longer courses it’s a toss up) but I beat him by about 1.5 minutes. 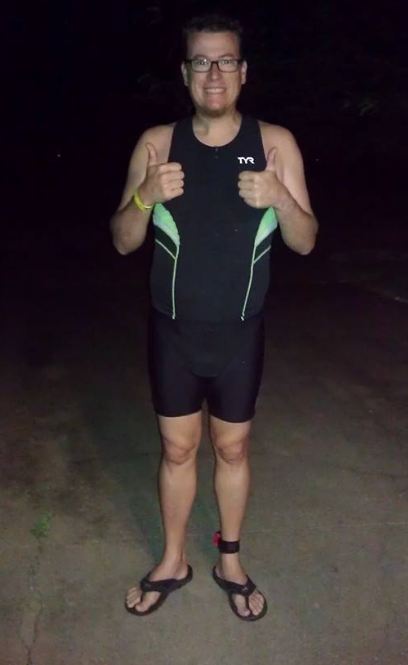 He had a really good race though and beat me over a minute on the run, so there’s that.

Dismounted as normal, had an close encounter of the T2 kind with another guy cutting in front of me going to the other side of the lot, but found my way to the rack in one piece.  I had a few issues, I was a little shell shocked from hammering the bike, also the run all the way back down the parking lot in the clip clip clips took a while, but I was off and running pretty quick.

I was REALLY shelled from the bike but I just kept willing my legs to turn over as quickly as I could make them. I don’t think Hokas were doing me a service here on the slippy trail but they also probably helped my legs not fall over. Honestly – I made the call to wear them because they already had my quick laces.  That is how seriously I was taking this triathlon yesterday.

Stayed just about 10 minute miles for the first two – the leggies just wouldn’t go faster. I ran behind, and then eventually passed a really fit looking guy (looked like he should have been running 7 min miles but he was just clipping along at my pace).  I just worked on keeping him in my sights and I finally found a gear that was slightly faster. I thought he would see himself getting chicked and pass me right back, but I kept the lead in our unofficial, undocumented competition of two.  Solid.

Then, I saw my friend Brian up ahead and just reeled him in over about half a mile. After the last turn onto the home stretch, I caught him and grunted a hello, and passed him. He found HIS next gear and said he would try to hang on, then passed ME back. I tried to hang to his pace, but I had nothing left. The legs were at max capacity.  I let him go and he finished about 10 seconds before I crossed the finish.

Exact same split as Pfluger. When I was really trying to push my 5k pace in training.  Again, I can’t even. I’m incredibly happy. 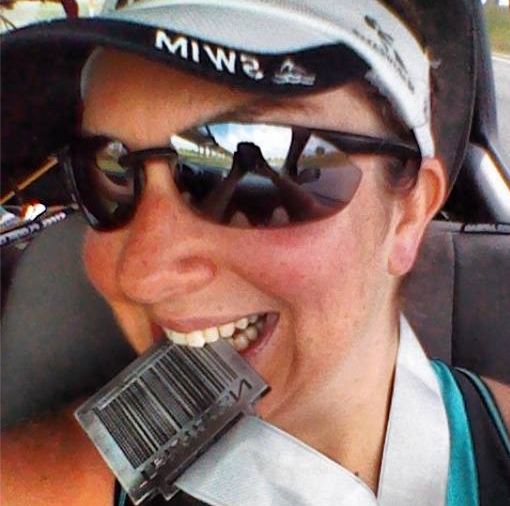 I don’t race again until my 70.3 in Kerrville in 8 weeks, but this is a nice little boost of confidence to keep me motivated to get back there.  Even though I’m happy with my sprint distance performance and didn’t lose any speed at the short course – I definitely have some endurance to recover.  Cheers to the next 8 weeks!  Nose, meet grindstone.  Break’s over, it’s time to put in the work!

Portland – Beauty is in the Eye of the Beerholder