Sometimes you do everything right before a race.  This was not one of those times. 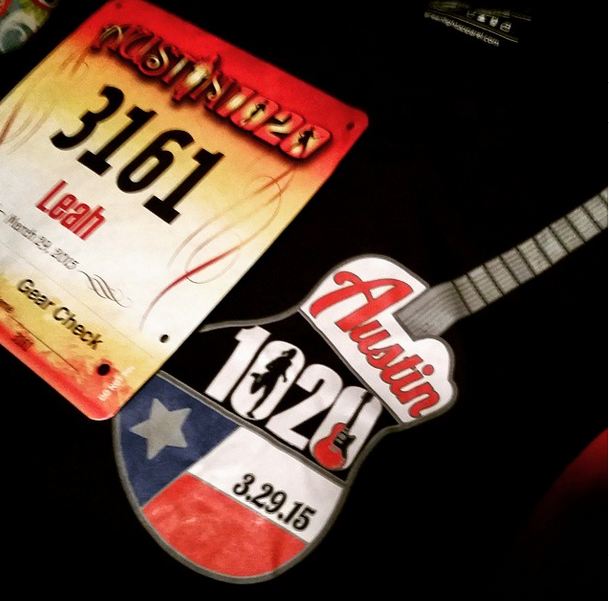 Get good sleep the week of the race, right?  Not staying up until FOUR AM on a Thursday having drinks?  Oops.  Hi Quix, you are not 21 anymore.  This resulted in a whole 4.5 hours sleep and I was just flattened on Friday.

Don’t try anything new at the expo, right?  Well, it was the day before the day before so I let things fly fast and loose and tried this nutrition drink.  Holy caffeine rush, batman!  I just got a little nauseous and a headache after twitching and chattering for a few hours, but Zliten got sick off it.  Lesson learned.

Make sure to stay off your feet and rest the day before the race, yeah?  Well, unless the weather is just WAY too perfect and you go stand up paddle boarding and take your wetsuit for a swim in the lake instead clocking your fastest OWS pace yet. 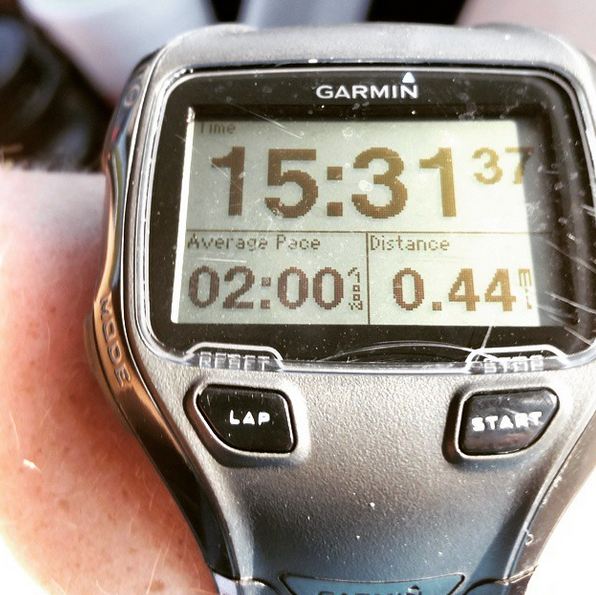 Oh, and not to mention grocery shop, batch cook for the week, do laundry, and clean off the butcher block.  Not much feet up time there.

A and B were mistakes, but I believe C actually made me so full of happy and joy (the lake part, I don’t get that excited about chores, heh) that it helped.

I didn’t fuck everything up.  I ate what I think was perfect pre-race fuel for the distance.  Lunch was a burger no bun and fries.  Dinner was veggie beef soup and salad and ribs.  I snacked on some fruit and sun butter.  I made sure I was full but not stuffed when I went to bed.

This race is one of my favorites because it’s 3 miles from my house.  Which, with an 8am start, meant I didn’t have to set my alarm until 6, and even that was early enough to get a leisurely wake up (quarter scoop purple stuff, coconut water, kind bar, another bottle of water, the ush) and I even got a half mile warmup on my treadmill which I think is happening every home race ever.

We got to the race around 7:30, which was just enough to drop our bags off at work (with potential stuff to shower after if we felt like it), use the bathrooms one more time, jog a bit to the start, and get there just in time for the national anthem.  Perfect.  No standing around getting stiff legs.

As the gun went off, I got a little choked up.  Wha?  No idea where that came from for a race I didn’t really plan to care that much about.  Emotions are weird. 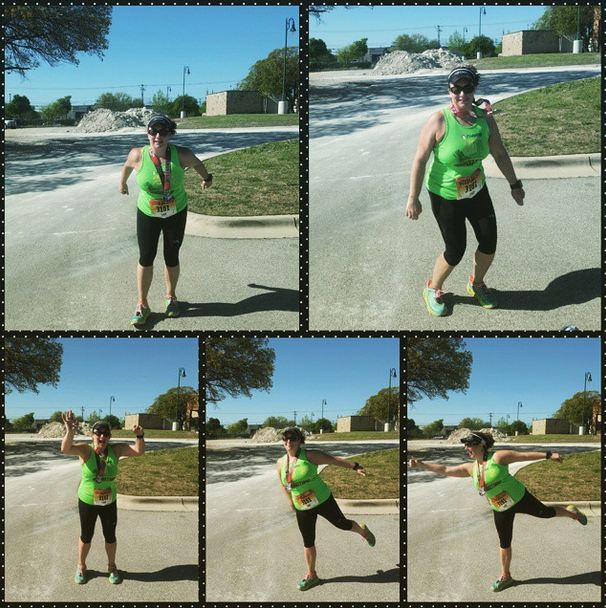 Trying to take a jumping pic is hard.

The good news is that for me, 10 miles is not long right now.  The question was what pace could I pull out of myself over that 10 miles?  My super A+ goal was 9:30s.  Considering I’ve pulled off maybe 10 miles that pace TOTAL of the 372 miles I’ve ran this year, this was ambitious.  A goal was to beat last year – at 1:37:08, that was still pretty ambitious.  B goal was to sub 1:40.  C goal was to feel like I made a good effort, running with my lungs a little burn-y, no matter what the result.

So, my plan was to run fast but sustainable, and see where that left me.  The first mile was a little crowded to get out and going, but when it ticked over at 9:40, and I was feeling pretty good, I knew it would be a decent day.  I was in “music up, heads down racing Quix” mode.  Happy I was able to get there.

The course was different from the last few years – it was essentially two parts and they switched them.  I liked it.  The killer hill that used to come at mile 8 and change now came at 1 and change.  I was able to give it some juice instead of just try to survive it.

The only bad part of the day was the wind.  It was 15-25 mph that day, which was AWESOME when it was at your back, but NOT awesome pushing into it.  After the 5k mark we found our first “uphill, into the wind” section.  I burned another match there to keep pace.  We finally got to the downhill part, down Burnet Road, and… holy crap, the wind made it still feel uphill.

That part was a little low for me.  However, my brain found a shred of common sense.  If the wind was strong enough to fuck up my downhill, it was TOTALLY going to help on the uphill.  I pounded a salted watermelon GU (caffeinated) around mile 5-ish and burned one more match in my book past the Coke bottling plant uphill and turned back onto Burnet for the uphill… which didn’t feel uphill at all.  Yay wind!  10k came right before my garmin ticked over to 1 hour.  Average pace wavered between about 9:38 and 9:42.

They added a new out and back right around 7 and the gel had fully kicked in, so I pushed pretty hard down and back up that hill and… for the first time in the race, the miles started to go slow.  I’m pretty sure that between 7 and 8 there was at least 2 miles, maybe 3.

At 8 I perked up for 2 reasons.  2 miles to go seemed short enough to celebrate the fact that I was in the running for at least a small PR, maybe something in the 1:36s, and MAYYYYBE even in the 1:35s.  Also, it went back to downhill against the wind, so the paces started creeping into the 8s and I was feeling fine (well, like someone was leaning against my lungs a bit, but SUSTAINABLY so).  Mile 9 was my fastest at 9:08.

Then, mile 10 hit.  The whole damn thing was uphill, and the way they changed the course, it was uphill into the wind.  The good thing was it was mostly a straight shot, you could see the finish for the last .75 mile so it was calling you home.  I started burning matches like crazy to get up that hill, to stay in the 9s.  I found some pain face (my pictures are hilarious, yeah, no links :D), I growled a bit, but I saw the official gun time clocking me at a small PR, so I knew my chip time would be a bigger one! 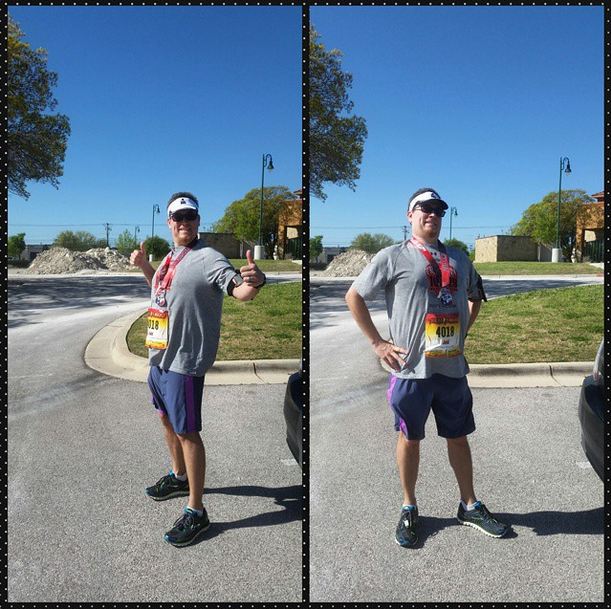 I recovered, got a water, and then went to go cheer Zliten in… who came a lot quicker than I expected!  He’s just coming back from an injury, and while he didn’t beat last year’s screaming pace, we both would have been mad at him if he did.  We both decided that we’d rather drink better beer at home than wait for the super long beer tent line for miller 64, so we grabbed our bags and headed home. 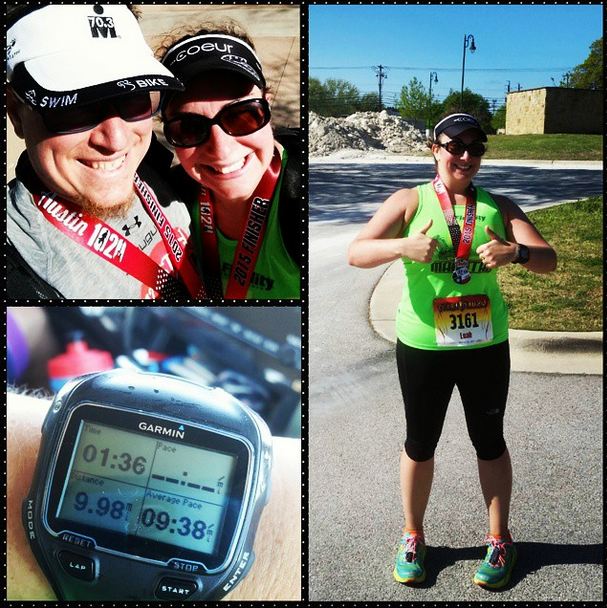 Considering how I felt after (day of and the day after), I do think I actually might have had more in me.  Which is weird, because I ran faster than I expected to.  I’ve run a whole lot of base miles over the last 6 months, but very little speedwork (beyond one run every week or two *faster*, which usually just flirted on the high 9s/low 10s).  I missed some training because of a stomach bug and took a week off on vacation and really haven’t done a whole lot of anything this month but apparently that’s just what I needed to do.

It’s probably time to see what I have in me in April, and push the paces a bit.  Slow on easy days still, but FASTER on hard days.  None of these fake tempos where I’m just running comfortably hard, I need to get out and do some real speedwork!  I can’t wait, I love the stuff. Remind me of that later this month, please.

This pace would have gotten me a REALLY NICE half marathon PR (right around 2:06) and I really do think I had another 3 miles in me without slowing down much.  I may have to see if there’s anything in the area in April or May and test my legs there.

Overall, I’m really pleased.  This race is one of my benchmarks since I do it every year, and every year I have improved.  Some years, like this year, it’s a little unexpectedly great.  Some years, it’s just a good representative of my training.  I had been a little down after my two marathons this year had produced… interesting results.  I guess I’m just better at the shorter stuff.

That just means it’s going to take more practice at the long distance stuff to crack that nut.  Since Zliten wants redemption at both Space Coast and Woodlands we’re in for 2 again next year, so I’ll get the chance at marathon #5 and #6.

For now, though, I’m going to enjoy the start of tri season.  5 weeks until Rookie.  Let’s get on the short and fast speed train!