So, I spent a lot of time belaboring this point here, but since this is my corner of the internet, I want to jot down how I’m going into and what I plan to take into this race.

Our spin teacher (also profesh cyclist) said something that stuck with me.  Don’t feel sorry for yourself out there.  At first it hit me as a weird sentiment, and oddly unmotivational.  Then, I considered the hippie rainbows and flowers “be grateful you’re able to do this triathlon thing” which is a nice thought, but when you’re killing yourself on the second loop of a run after 2+ hours of pushing yourself in the heat and humidity, you don’t feel lucky about anything. Trying to shove that in my head to pull out on lap 2 of the run will result in racing me giving past me a few middle fingers. 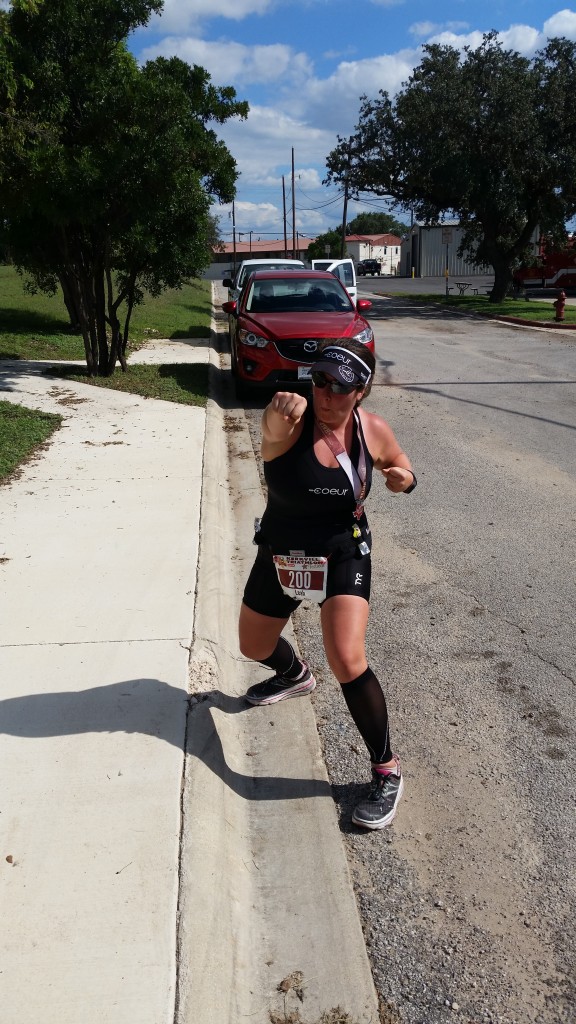 I really think it’s more literal.  Don’t feel sorry for yourself.  Just do the work.  Just carry yourself through the day you have worked for, and deposit yourself across the line according to plan because you know you can fucking do it if your head stays out of the way.  When you get to the SUCK part of the race (and if you don’t get there, you’re not racing hard enough), emotions are the enemy.

So, the overall goal, is to spend just a smidge less than 3 hours, if all goes ideally well, out of the inner caverns and craters of my head, just executing on paces I know I can do but have yet to put together.

I feel like racing my 28th triathlon, these things should be rote, but they’re not.  Every race is a different beast.  I felt like I was less specifically trained for this one, but then I rocked the fuck out of an Olympic brick in practice on Saturday, so maybe it’s just taking what went right at the last one and expanding upon it.

Tuesday: up early to get cavities filled (yay?) so no lunch workout, but legs smashed at endurance cycle for 90 minutes.  Good stretch after.

Wednesday: off.  Needed it.

Thursday: Double bricks (15 mins bike/1 lap around the school x2) with 1 mile run cooldown.  Mixed these with race simulation bricks so I practiced each transition twice.  I was holding below race pace like a champ.

Friday: Now, it’s time for the part that many athletes don’t like, but I actually do – the rest part.  I finally feel like the fatigue is starting to clear.  Just a little.  And I’ve got 3 more days before the race.  Today’s goal is one more OWS in my wetsuit to practice taking it off quickly.  And that’s IT.

Saturday is a day off.  All fun stuff, no workouts, but also no beer or staying up late.

Sunday, after a quickie spin to keep the legs loose in the morning, we’ll pick up our packets and drop off the bikes and then do something inside and quiet for the rest of the day.

The weather is… curious.  Looks like the forecast calls for a cloudy morning (good) but high for the day is 85 and it’s going to be 80% humidity (yuck).  I can’t control the weather, but I know I got out in worse conditions last week and ran a 10 minute flat pace off a very challenging bike ride, so I’m not going to stress (too much).

And, for the three hours I’ll be out there, here is what I intend to hold in my head. 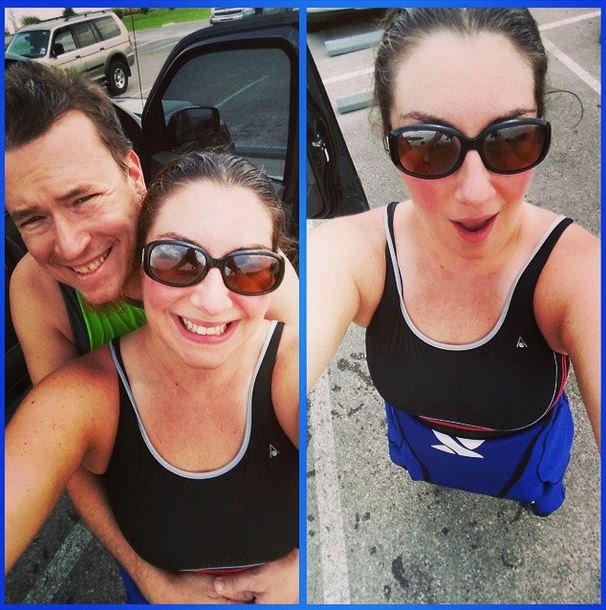 This swim is a time trial start (yay) so it doesn’t really matter where I start in my wave, though any extra minutes I can bank against the climbing heat and humidity is probably best.

Right now, the difference in my fast and steady intervals are really negligible in the pool.  I want to make sure I stay focused and don’t day dream, and definitely be breathing hard, but I think trying to redline this swim would be a mistake.  I want to skirt the line between steady and hard.

Looks like we lucked out and it’s closer again this year (same spot I’m accustomed to, not moved due to construction).  This should take about 2 minutes off my transition expectations.  Ha, wouldn’t this be funny if this is what gets me under 3? 🙂

I’ve practiced getting my wetsuit off and I *think* I’ll be ok.  First race without a peeler… hold me!

Otherwise, my goal is to go minimal.  Socks, shoes, helmet, glasses, go.  I plan to have two bottles full of heed and a few gels in my bento box to pick from.  I’ll stuff my bike gloves in my bento box JUST IN CASE but I think I can deal without them for 25 miles.  Especially if I’m spending most of my time in aero.  Which I should be.

I’m going to try and carry the same thought as I did through Rookie – the first segment of the race is swimtranstion1.  The first time I will allow myself to catch my breath will be on the first bike flat section. 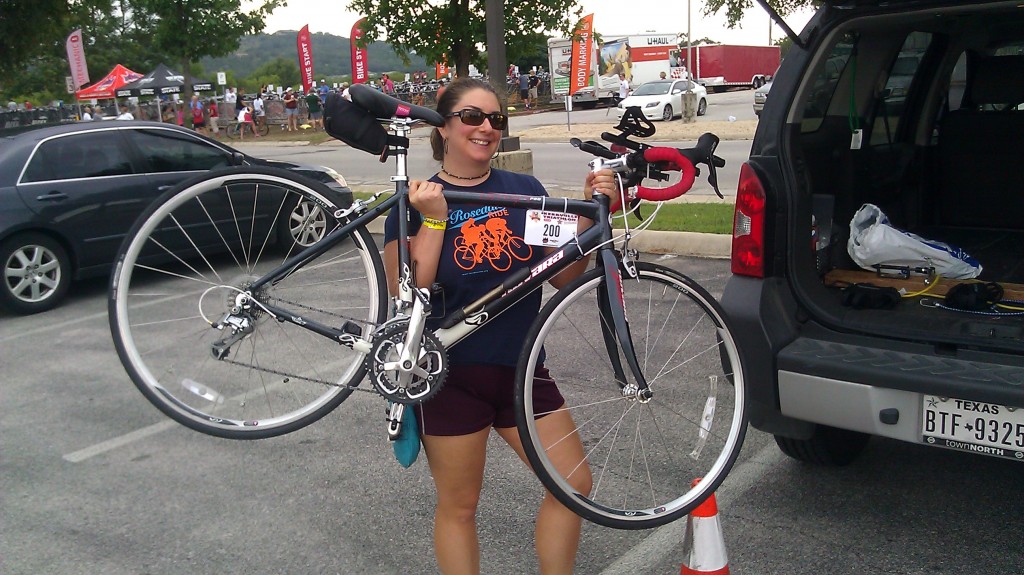 I want to cook this hard like Rookie.  This course is one of my favorites, and while not totally flat, definitely has sections where I can fly.  It’s one of those ITU type 4 loop courses.  There’s one decent incline at the beginning of each lap and one short “get out of your seat” on the second half, but they took out one of the BRUTAL hills from Tri Rock, so I see good things happening.

My goal, actually, is to post my best triathlon bike speed ever.  Like, by a lot.  I like to set reasonable goals.  However, my husband pulled this out of his legs in 2013, and we are both the best cyclists we’ve ever been, so I can do it.  It’s just about keeping high cadence, riding aggressively (hopefully not aggressive to other dumbasses like last time, but it is a very crowded course so we’ll see), and remembering what those endurance intervals at Pain Cave feel like, and, uh, staying there for 80 minutes.

Basically, this is the pace I’m having the most difficult time talking myself into, but I think I can do it.  Rock and roll, let’s  push THOSE WATTS (sadly, since my power meter is not waterproof, I’ll be going without, so I guess THAT EFFORT).

The last 1-2 miles, no matter what, I reduce the effort a little and spin lower resistance and higher cadence to get my legs ready for the run.

Planning on gel #1 at about 20 mins in, and then assessing how I feel, if I want another closer to the end.

Copy and paste from Rookie: Every. second. here. is. a. second. I. have. to. run. faster.  Helmet off, shoe, shoe, shoe, shoe, visor, race belt, effing GO.  The run starts the moment I get off the bike and anything that impedes that is a rude interruption that should be done away with.  This is not relaxytime, this is BUSINESS time. 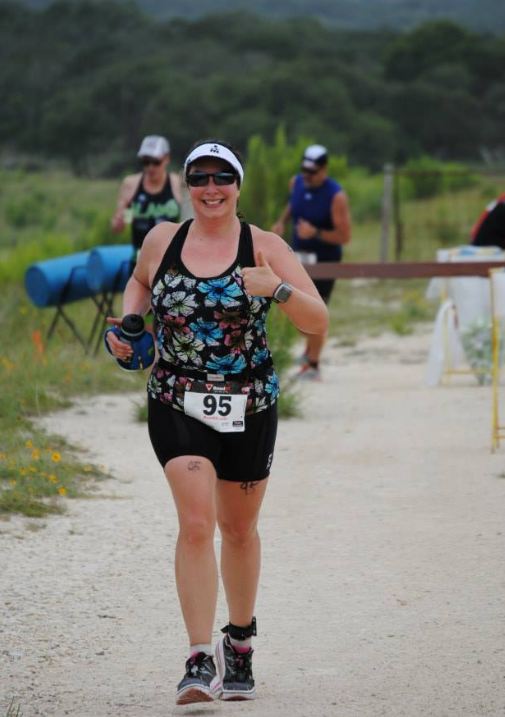 I really and truly believe I can make unicorns and rainbows explode here if I can just keep my head on straight.  This specific run course has been a party to one of my most spectacular fizzle-booms where I PW’d my 10k run by about 2 minutes per mile, or something.  However, I kinda want to show it who’s boss, so that’s something.

Mile 1 will be all about settling.  Getting the run legs.  Focus on cadence.  I expect this to be slower than race pace.  Maybe by even 1 minute per mile.  This will not freak me out.  This is normal.

Because, then it’s time to mother effing descend.  This is what we do on runs.  This is rote.  Every run finishes faster than it starts.  This is how I want to race, so this is how I train.  Once I settle in, I’m going to start gradually work my way down to race pace and then really push it on the second lap.  I’ve tended in the past to get demoralized on two loop Olympics and slow down at the end.  This time, I want the second lap to be the best because I’m ripping up the pace.

My goal with the run is to not question if I left anything out there.  I’d like to beat 1:02.  I’d love to go sub-1 hour.  I’d super love to PR my standalone 10k from 2009 at 56:54.  The last result is unlikely, but I really think if my head can stay out of my way I can do myself proud here. And definitely not be feeling sorry for myself.

I want a sub-3.  Real bad.  So I’m going to go for it.  I keep wanting to caveat this with… but if I get close it’s ok… or other such backing down from the big goal.

But, that’s not fair.  In summary, my goal is to continue to move forward at a pace which brings me across the across the line in less than 3 hours.  Sounds simple, no?  Let’s see what Monday brings.