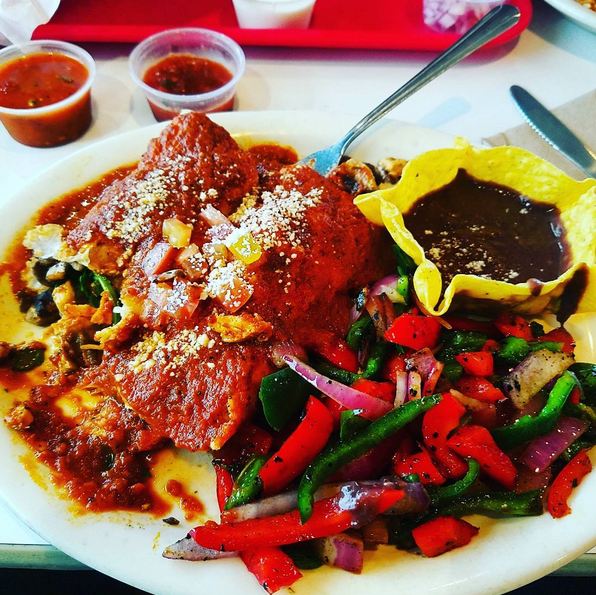 Spinach and chicken enchiladas after a long hot bike ride…

I was getting a little down on myself this week because I’ve stopped making progress with #projectraceweight.  I’m so glad I’m tracking against calories burnt on fitbit.  Previously, I would have just been like “WTF is wrong with my body, I’m defective, it’s not fair, yadda yadda”.  Now, I look at fitbit, and I’ve been over my (-1000) calories most of the last 7 days.  That’s data that makes sense.   I can roll with that.

It’s going to be interesting transitioning back to training a little bit.  In theory, I just need to continue to watch the numbers, but there will be some point where I’m just too hungry to keep it up and I’ll have to eat more.  That’s fine.  I’ll figure it out as I go along.  All I know is that whether I’m using -1000 or much less of a deficit per day, I won’t be arbitrarily aiming for some calorie count no matter what my activity level is like I did last year.  That way lies fatness.

In terms of diet modifications, to maximize my performance at the lowest calorie intake is to be smart about my macronutrients, most of all carbs.  But not in the way I bet you’re thinking.

I suck at pure carbs.  I want my sugar to have fat in it too.  Chocolate.  PB+J.  Pretzels and cheese.  I know fat is also essential, but it’s very easy for me to hit my range and pretty easy for me to go over when I’m eating more.  On 1200-1500 calories, I’m good (typically) at hitting my protein and fat macros, so with more activity, I need to increase pure carbs.

One of the best ways for me to do this is to fuel my workouts well.  I have a mental block against this for some reason.  Gels and sports drink are only for long, hard efforts.  Fruit is something to be limited.  Jellybeans rationed.  The odd thing is that when I actually do properly fuel my workouts I feel great, and actually end up eating less overall throughout the day.  But my stupid brain goes: “hey, this isn’t a race, just underfuel a bit now and we’ll binge on some french fries after instead because that’s way more fun than stupid GUs”.

While it kills me a little inside to suck down 2.50$ packets of stuff that doesn’t taste very good on just your average Wednesday workout, I can be better about bringing stuff like dried mango, jelly beans, etc, things that hit that magical 25g per ~100 calories.  And the pros keep pushing the lowfat chocolate milk recovery thing, so maybe there is something to that.   I may give that a try on workouts I have access to a fridge directly after. 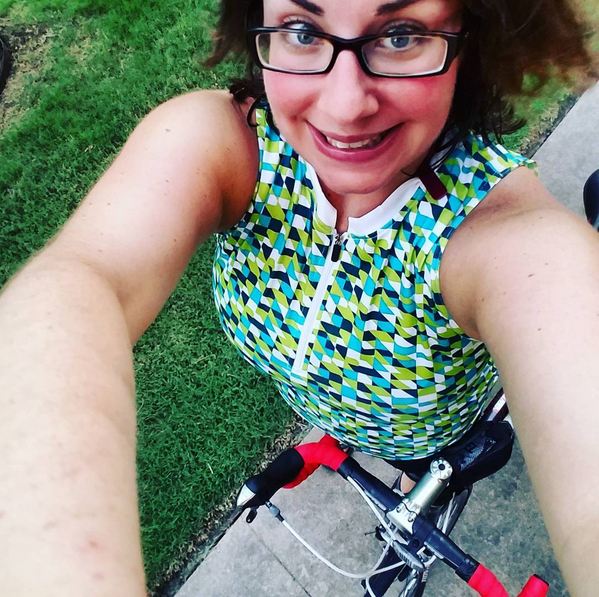 Ladies and gentlemen, I’d like to formally announce that I’ve done my first group ride since February… and it was SUPER FUN and not really scary at all.  It was the beginner ride, so people were a little more courteous, and also we were only 7 (and then 6 after a rider dropped to go home), so it was less crazy than trying to keep 15-20 people together.

The pace was relaxed.  Not agonizingly slow (though I heard we went a little faster than normal since we all weren’t actually beginners), just a nice cruising pace winding through lots of neighborhoods on the north side of Austin I never knew existed.  Definitely recovery ride territory, it was easy peasy minus the 95 degree heat and a few steep hills.  I’m still terrible at clipping in, it takes me at least a few tries and typically looking down to fumble with the pedals to do it, but the most important thing is I feel confident unclipping.  That makes everything else okay.  It’s something that will come with practice and I’m alright practicing when I’m not terrified of going down on a busy road in front of a car.

We had so much fun playing bikes we decided even though it wouldn’t be the most convenient thing, we bike commuted today, and there will definitely be a destination bike ride or two this weekend.  Bikes are habit forming substances!  I’ve come so far since THIS GIRL a few months ago, wanting badly to spend more time outside on two wheels but having no idea how to accomplish that because bikes were scary.  It took practice and doing stupid stuff like riding around my block 20 times stopping at every stop sign to practice unclipping, and going from 2 bikes to 6, but I’m going to say… mission accomplished.

I still have so much room to grow.  I need to start riding over 20 miles at a time again.  I need to become a little more fearless during descents.  I need to really nail down the position in my TT bike.  I need to get stronger on the bike so my watts are higher than my heart rate again.  I need to figure out what to do with the readings I get on my garmin from my nice, expensive vector power pedals that for the last year, I’ve looked at, and went, “ooh, neato” and summarily moved on.

However, these are all things that will come more into focus when I start specifically training, which is next week. 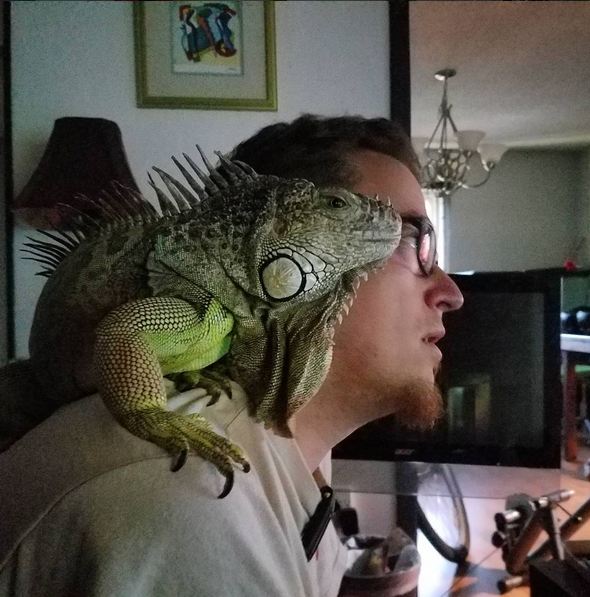 I don’t have any appropriate pictures to go here, so have one of Zliten and Donna watching TV instead.

After one more weekend of sleeping in, playing on the cruiser bikes and in the water, I plan to get myself moving in the direction of actual, intentional sessions this week.  It’s a small jump from what I’ve been doing – looking to do about 7 hours a week (BUT I’m not counting commuting/cruiser bike miles just like I don’t count walks in my training hours now).

I’m building the first month of training on these assumptions per week:

And, as a refresher from the nutrition section:

…but, like I said, a few more days of play.  Off to play bikes and hit the lake right now!