We found out a buddy of ours was doing his first triathlon at the Lifetime Indoor Tri, so we reswizzled our plans and decided to end our first week back with a good solid effort. 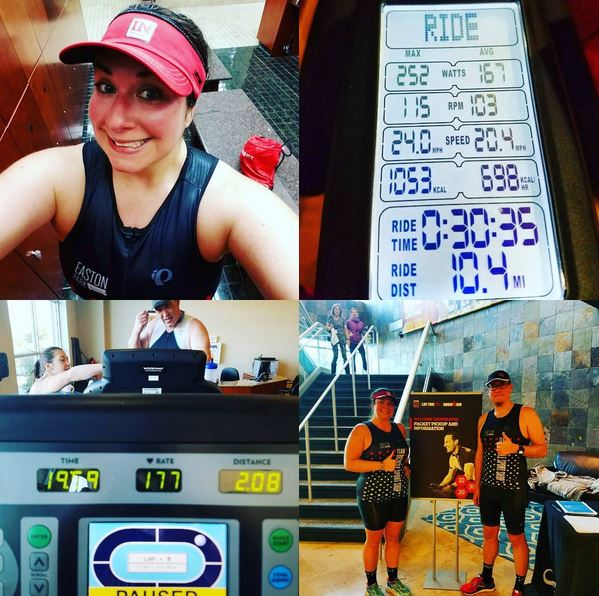 Team kit = reimbursement for the race. 🙂

There was zero taper for this, in fact, I was pretty darn wiped from over 10 hours before I even woke up Sunday morning.  I wasn’t going into this as a “this is a test of my athlete worth” mindset at all.  This was a hard effort to kick off IM training and to support a friend, that’s it that’s all.

It’s a good thing because I bungled a lot of the setup and things and went into both the swim and the bike frazzled.  But overall, I’m pretty happy with the day.

It started with sleeping in a *little* longer than I had hoped (I was up really late on Friday and my sleep schedule was a little wonkified).  We got there with enough time but I farted around too much in the locker room, I guess, because I got to the pool and got rushed to a lane and was still putting in my earplugs with 20 seconds to go.

I didn’t get my garmin started properly, and I was stuck with whatever music popped on my swimp3 player (and it was EVERY SLOW SONG from the Moulin Rouge soundtrack).  Zliten and I were sharing a lane and he started pulling away from me, but I know I go through 3 stages on a hard swim:

This was no exception, and at 5 minutes my form came back and I felt less like a flailing fish, and I got half a lap ahead by the end.  Sadly, I ended up at 19 laps, which if it was a 25m pool, is pretty darn slow for me, especially at a *effort* – for example, yesterday, I swam 1:50/100m over 30 mins and I wasn’t close to redlining like I was Sunday.  Ah well, we’ll never know if it was me or the pool. 🙂

This time, I remembered how hard it was to put on a sports bra while wet, so I wore it under my swim suit.  That was a good decision.  I actually got out before Zliten but I waited for him and we walked up together and they were like OK, get your bikes set up go go go go and I did.

I got going and tried to start up my phone with my kick ass turkey trot playlist… and since I haven’t used it since then, for the life of me, I couldn’t find the music app.  I asked Zliten but he didn’t remember either.  I spent the first 5 minutes cycling looking for my playlist and cursing (sorry random guy next to me), until I finally gave up and listened to Spotify.  I had to keep hunting and pecking for songs on my Most Played playlist.  I listened to Rise twice, Dirt off your Shoulder three times, Bad Habit twice… but it worked better than nothing.

As a product of being a little angry and also all the bike training lately, I was able to push a decent amount of watts and ended the 30 minutes with 10.4 miles.  I figured there was NO WAY I beat Zliten but he only got 9.1.  I actually went back and looked at 2015’s results and I would have been 1st place female overall by far with that bike so I’m pretty stoked.  Oddly enough, if you focus on something, you get decent at it.  Who knew?

We had a little break getting set up on the treadmills and Zliten helped me find my playlist.  Whew.  I was honestly looking forward to this part the least.  If I’ve neglected something the most, it’s been run speed.  My plan was to start at 6.0 and go from there.  I started… and 6.0 was actually tough.  Ugh.  And then my playlist failed after one song.  Let this be a reminder to check your equipment before every race!

I’m might have had a little boost if I wouldn’t have had to expend the mental energy dealing with my music, but let’s face facts.  Last week, I’ve did a 11 mile run and an almost 4 hour TT bike ride, my longest swim in a while, plus a bunch of other stuff.  My run game is not especially strong right now.  I hung on and ended with 2.08 miles in 20 minutes (9:36 pace), and my heart rate was at 175-180 which is my redline heart rate, so I did all I could.

It was a solid hour of sprint triathloning, and great way to kick off tri training, and the start of a great day.  I came home, and ate all the things, and actually even passed the heck out for an hour after stretching and rolling.  Appropriately enough, I dreamed about biking.

And… after waiting for 3 days for results – I got 3rd overall!  I’m pretty excited about that, and it proves that the bike matters the most. 🙂