In retrospect, I should have known I was in a bit of trouble when I crashed into rest week at 9:30pm on Sunday night, finishing up my last to do – passing my Tri Coach test.  Sometimes I feel guilty about bitching that I have too much to do, because, really, at least 87.3% of my life is stuff that I really do enjoy doing.  I don’t dig ditches for a living, not even close.  I choose to triathlon in my spare time because I love it.  I appreciate that I have a great big circle of awesome people in my life.  I love learning new things.  Most days knowing that the busy-ness is a product of my own choosing is enough. 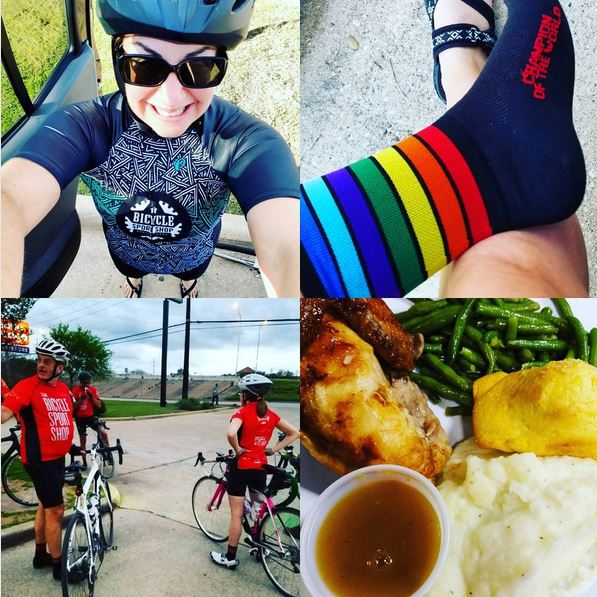 New kits and rainbow socks and bike friends and finally getting to ride outside after work and totally mediocre but wonderful-in-the-moment food.  Who could ask for a better Wednesday?

Once in a while though, even the good stuff gets overwhelming.

The rest of the week was alright, but Thursday, I felt like poop mentally and physically.  I’d been dealing with fatigue, which is actually kind of normal the first part of rest week, but it was lasting a little longer than I would have liked.  I was stressing about the events of my day.  Work was being… work.  I slept late because I was tired and that meant I’d be home super late and I’d be packing the camping stuff super late and it would be another day where I didn’t get to bed on time and I’d have no time to relax and blah blah blah blah.

So I did something I don’t normally do.  I cut my swim and weights that day.  Not attempted to reschedule.  Just cut.  I could not with the idea of squishing into my wetsuit and jumping into a freezing cold lake so I just didn’t.  I halfheartedly brought a change of clothes and the bands the next day to make up weights, but lunch came and went and we just DIDN’T.  So, apparently, I took THREE whole days off last week and I have NO REGERTS about it.

Then, I suffered through quite possibly one of the more miserable 10 mile runs I’ve done.  Most of it is totally on me but not everything.  It’s true, we stayed up drinking at the campsite until well after midnight, that’s on us.  The people making noise until wee hours, making it hard to sleep when we did retire?  That’s outside of our control.  The fact that I only brought one small bottle of half strength gatorade and ate two chews (not two packages, two chews) is on me.  The fact that the weather decided to be INSANELY humid and sunny?  Not my fault. 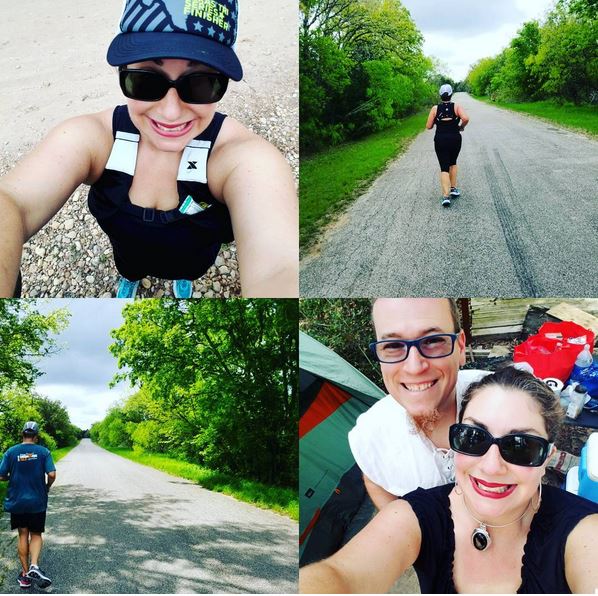 Pre-run smiles.  Post run I doubled over, hugged the AC in the car for about five minutes, and drank 3 full bottles on the way back to camp.  By the selfie in the fourth panel there had been food and beer, so smiles returned.

However, all these things combined to make it a good mental training run.  Zliten may beg to differ, but I dealt with all these issues with minimal whining considering the facts at hand, and made it back to the car without dying at a pace I would absolutely respect for an IM finish (11:45/mile).

It wasn’t all bad though.  Earlier in the week I had two LOVELY bike rides, and one of the nicest lunch runs in a long while.  Am I thrilled with under 6 hours last week?  Not really, but I think under the circumstances, missing 1.5-2 hours of training on a rest week isn’t the end of the world, and isn’t going to be the deciding factor on how I perform on race day.

One more two week training block and it’s taper time.  This weekend is the last feat of strength – long day #2.  I’m really ready to find out how this one goes.  It’s the full distance swim (2.4 miles), full distance bike (112 miles), and hour run (/walk if needed).  I’m ready to get my second 100+ ride under my belt, test out race day fueling, and confirm with myself that I haven’t lost the ability to ride my bike even if it’s been a few weeks since I’ve done a more-than-half-a-workday ride.

Also, the forecast right now is 82/58 with full sun.  The last long day just happened to fall on a nice, crisp day.  This is more like what we can expect race day, so it will be good to be out in it. 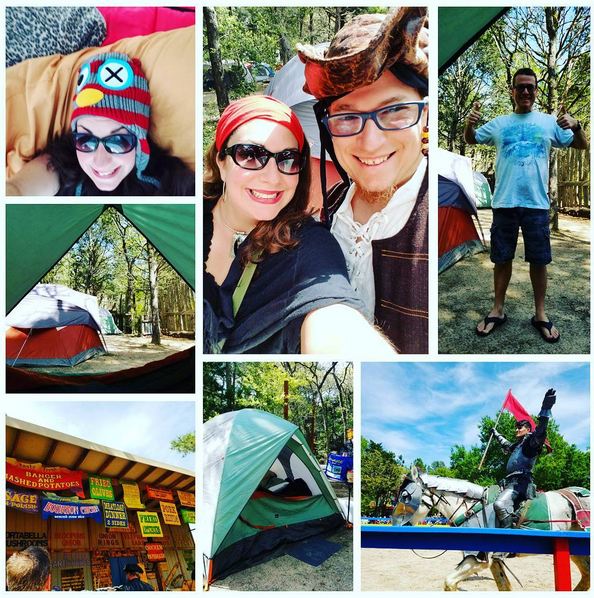 This is from last year but all the things are kind of the same except the weather was too hot for hats and scarves.

Going camping (especially party camping with a giant group of people) is an interesting choice for an IM training block.  If I was looking for pure recovery in the sense of the word, I was barking up the wrong tree.  Two days of drinking with a really dehydrating 2 hour run in the middle of it.  33k steps.  Dealing with that lovely time of the month in the woods (and the exhaustion that comes from it).

However, I’ve been feeling a little bleh mentally, and I am much better now, thank you.  My soul is refreshed.  I spent two nights playing in the woods, sans phones and screens, and experiencing fun things.  It’s almost as if I had a little mini-vacation.  The best thing about camping close to home?  We were back well before noon on Sunday, and I got to have the lovely day of napping and watching Star Trek, so it almost felt like a long weekend.

Luckily, yesterday was both super restful AND also productive.  The house is pretty well picked up and the camping stuff is put away.  After realizing that my few green toes that still had polish on them that matched my St Patrick’s day outfit were actually left over from Christmas, I made some time to fix that and also fix my brows.

Besides one non-negotiable to do this week(getting both the cars inspected over lunch and paying registration), my goal is to eat, sleep, work, and triathlon.  This isn’t for forever, but I really do need to mind my rest and recovery and stress levels if I want to be successful at this. I’ve been skirting the line lately and now it’s time to go back to ignoring the world for a bit. Everything else needs to go on hold.

I tracked my food Mon-Thurs, and then went camping.  Back to it today, but that also means no useful metrics.   Same with weighing.  I weighed twice, and with those weights I was 0.4 lbs down (187.2), but that’s not weighing REGULARLY.  I’m going to keep trying, and I’m happy I’ve made it this far without saying “fuck it”, but for some reason I’m subconsciously rebelling against it.  I don’t know what to say except brains are weird.

Either way, it’s clear to me that my body is not capable of losing weight during Ironman training with the attention to detail I’m willing to put into my diet and tracking it.  That’s ok.  It was a long shot to expect it.  I have gained a lot of muscle, a lot of endurance, and a healthy respect for this distance of racing.  I can work on the number on the scale (and maybe not eating cake daily) after the race.

Long Day #2 – Being your own friend