As time goes on, as a fishie in a human’s body, all vacations seem to descend into as much time in the ocean as possible.

My natural state of being when there’s ocean around.

With land-based vacations like Bonaire or Key Largo, that means just about every moment until Zliten cries uncle.  On a cruise, though, you’re limited to the days your have at port, and I think we pretty much made the most of them.

Day 4 of the cruise, we docked in Roatan, and took a cruise tour excursion to Tabatya Beach.  We heard good things about the snorkeling there, and it did not disappoint.  We’re actually considering returning there later this year, the reef was so gorgeous.

I actually didn’t look at any of my photos until after the cruise was over because I was bummed about them for no reason.  My back was hurting and I couldn’t stabilize as well as normal so I figured my pictures were going to be shit.  Not true in the slightest.  I’m sure I missed a few things because I wasn’t at 100% but I have some great stuff to show off, so here we go! 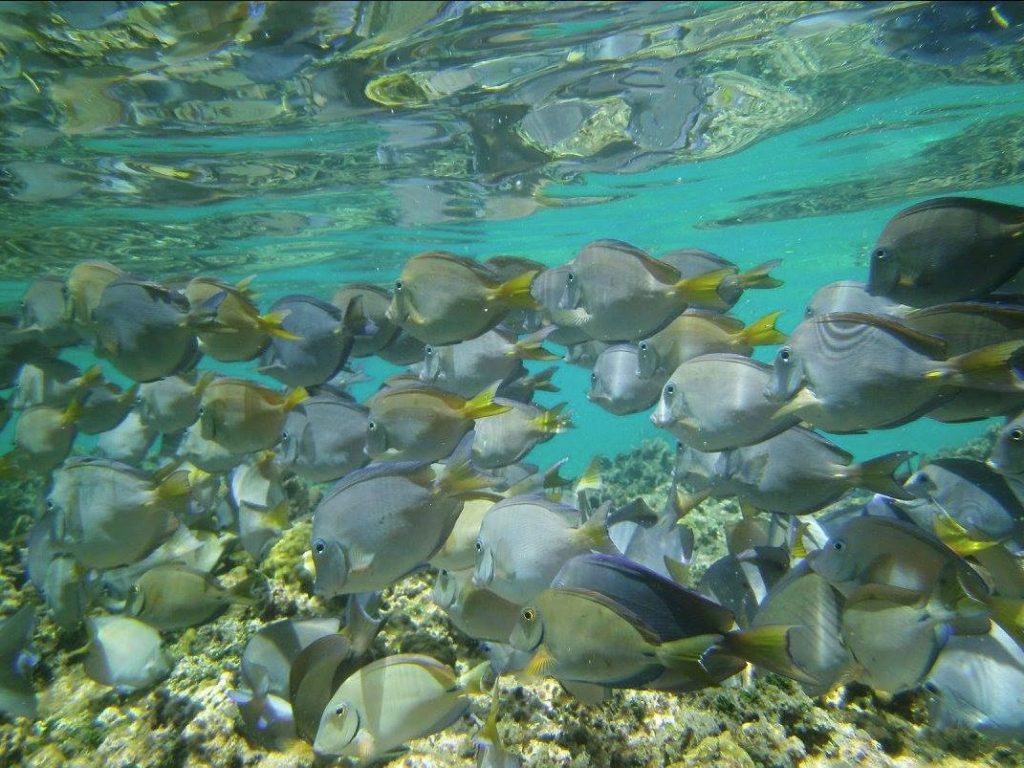 This may be one of my favorite pictures I’ve ever taken.  A giant school of Ocean Surgeonfish playing the the morning sun. 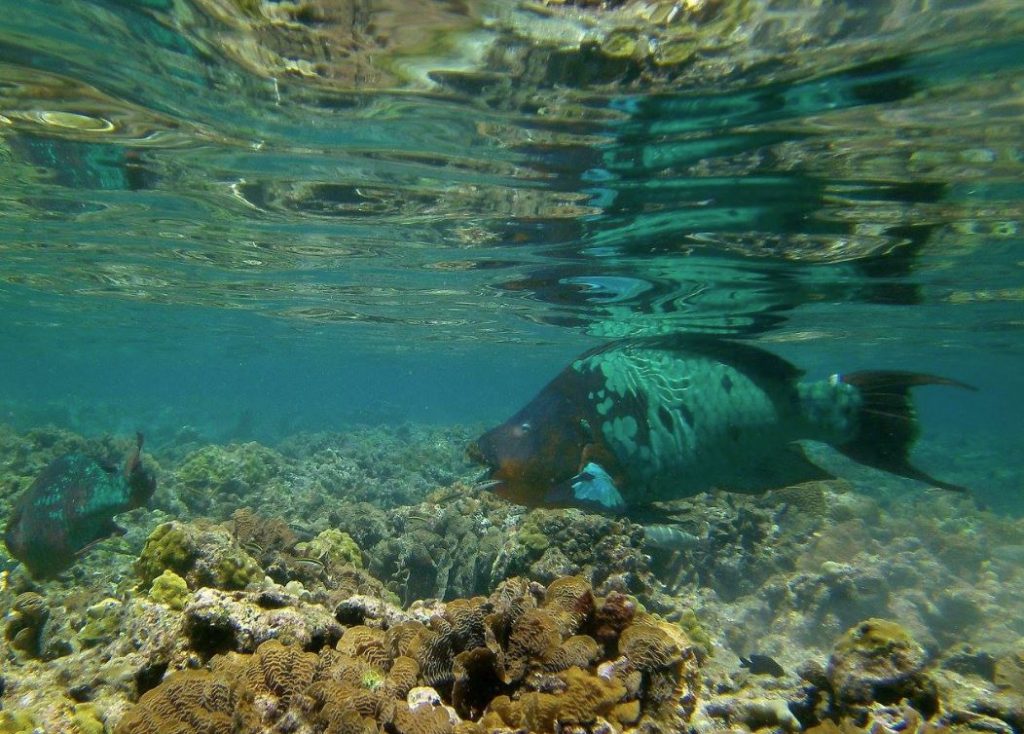 Giant mature Rainbow Parrotfish are usually super skittish and they’re super hard to photograph well, but this one and a few friends were just hanging out in like 18 inches of water feeding.  Watching them from above, their fins kept poking out of the water.  I stayed there for a while in awe even though I almost snagged my rashguard about 10 times on the coral. 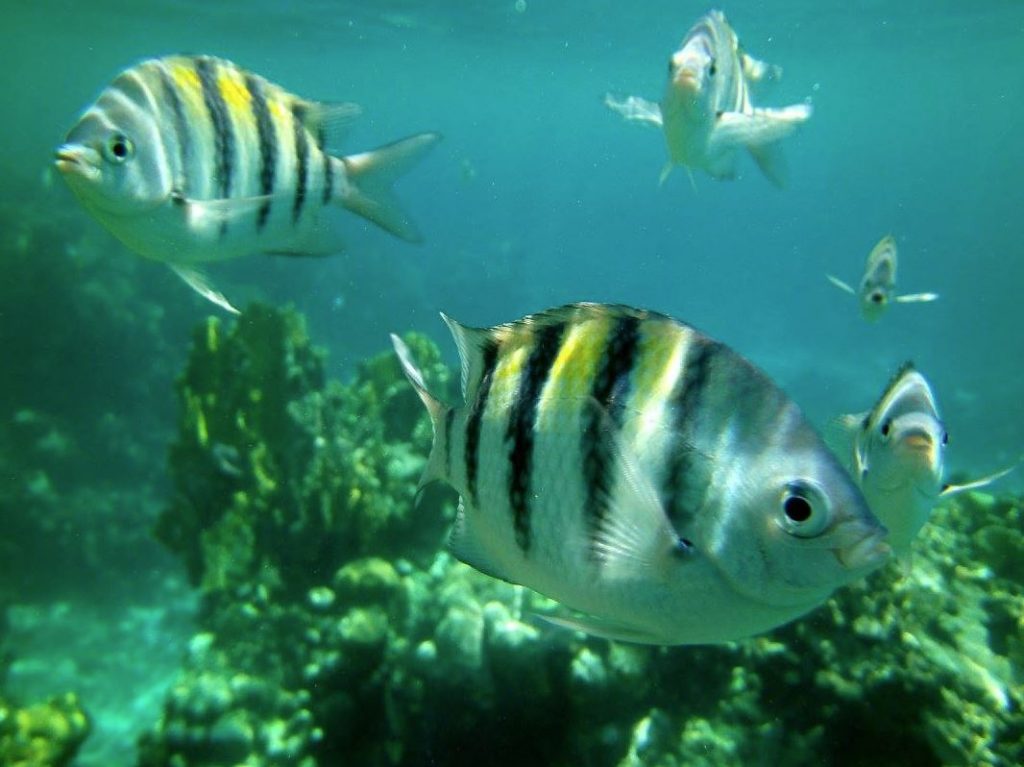 Sergeant Majors are my favorite common fish and they were super brave and wanted to include me in their school and show me around everywhere.  This was taken without zoom.  They were THAT friendly. 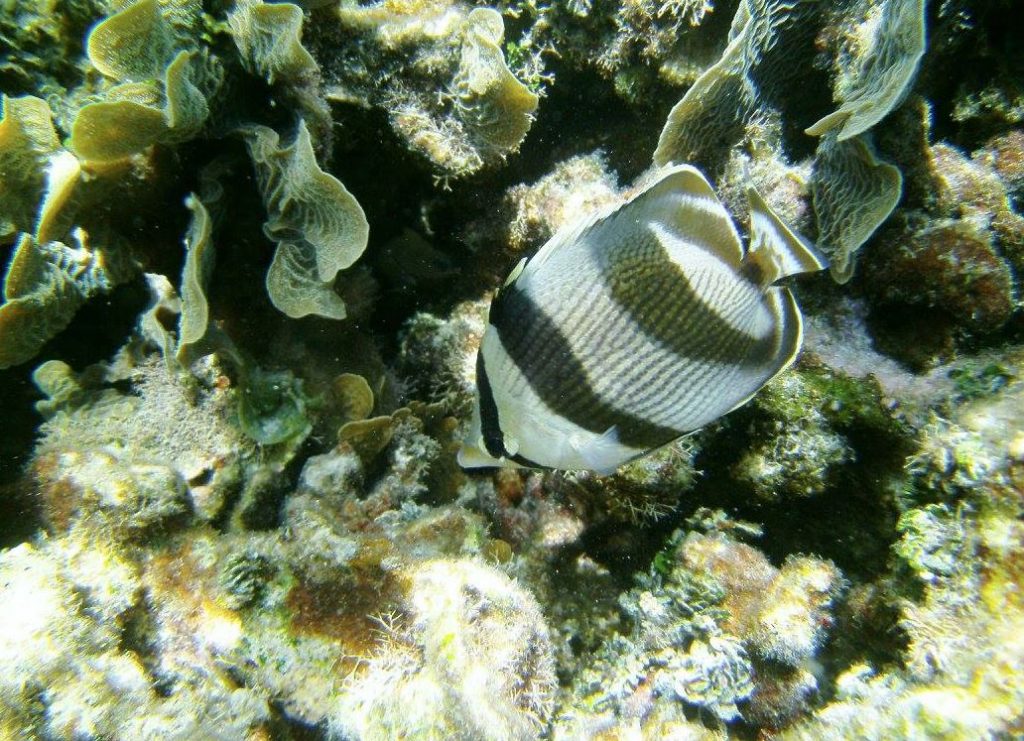 Not a terribly rare fish, but I like my picture of this Banded Butterfly feeding. 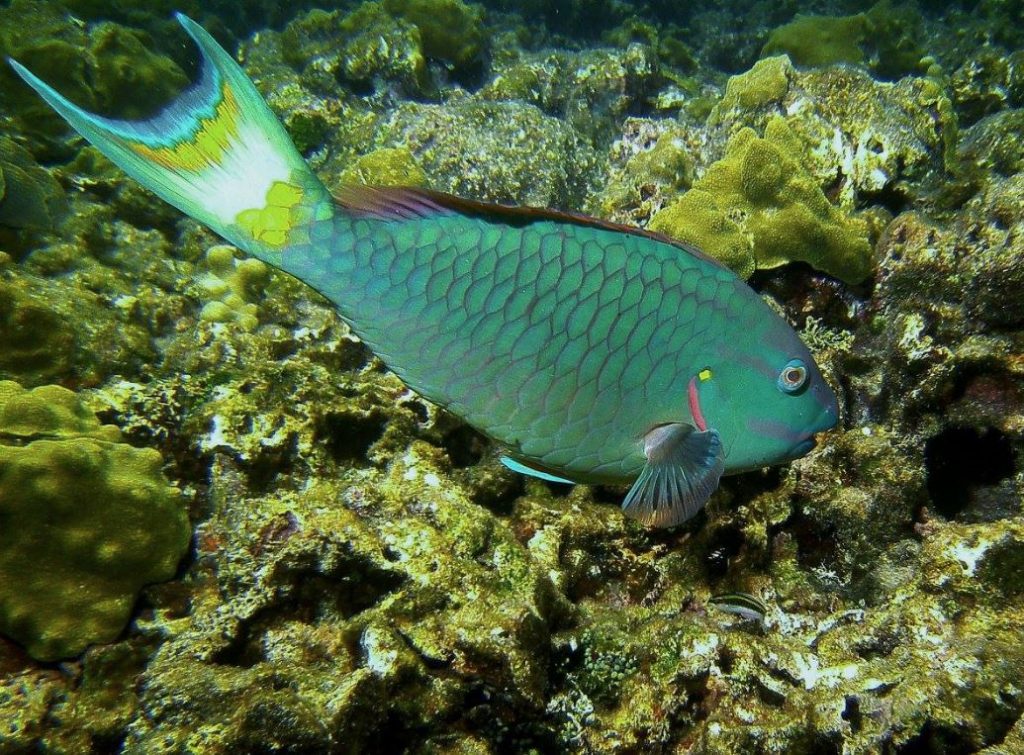 Parrots are all over down there, but this Stoplight was showing me his good side. 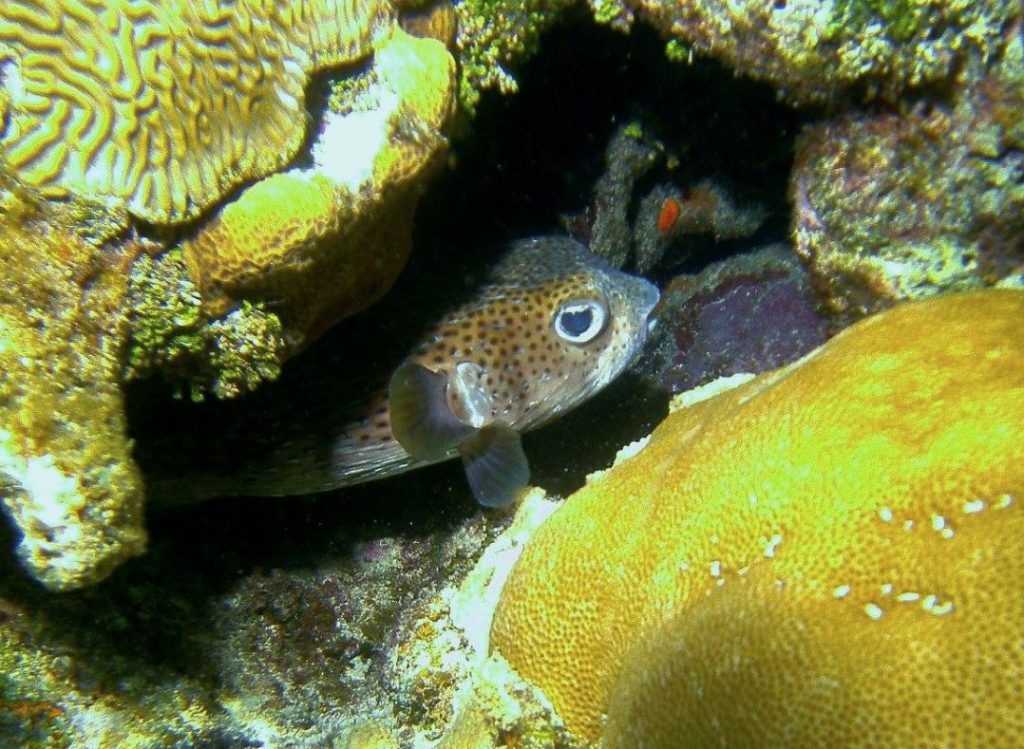 Pufferfish says “peekaboo, I see you, now GO AWAY”.

It was a spectacular day.  We started out about 9am with beautiful conditions and light.  We took three trips in, about 60-90 minutes each time, and took a break the first time to reapply sunscreen and the second for a quick lunch.  I think we covered at least 2 miles in the approximately 4 hours we were out there, if not more.  Bonaire might be tops for diving, but I think the snorkeling in Roatan is definitely some of the best around and we’re definitely considering spending a week there soon.

Storytime!  On day five of the cruise, we docked in Costa Maya, a new port for us.  The diving was pretty expensive, the snorkeling situation was a little sketchy (either not great or you had to go out of town), so we decided to take a cab to a nearby beach and see what “not great” meant.

Well, not great means that you will have to swim about an Ironman distance swim to see anything and dodge boats and current to do it.  In the future our yellow snorkel vests and even a diver down flag would be prudent.  These pictures are not the greatest, the lighting and conditions were not super, but here’s a few things from the area around Yaya Beach. 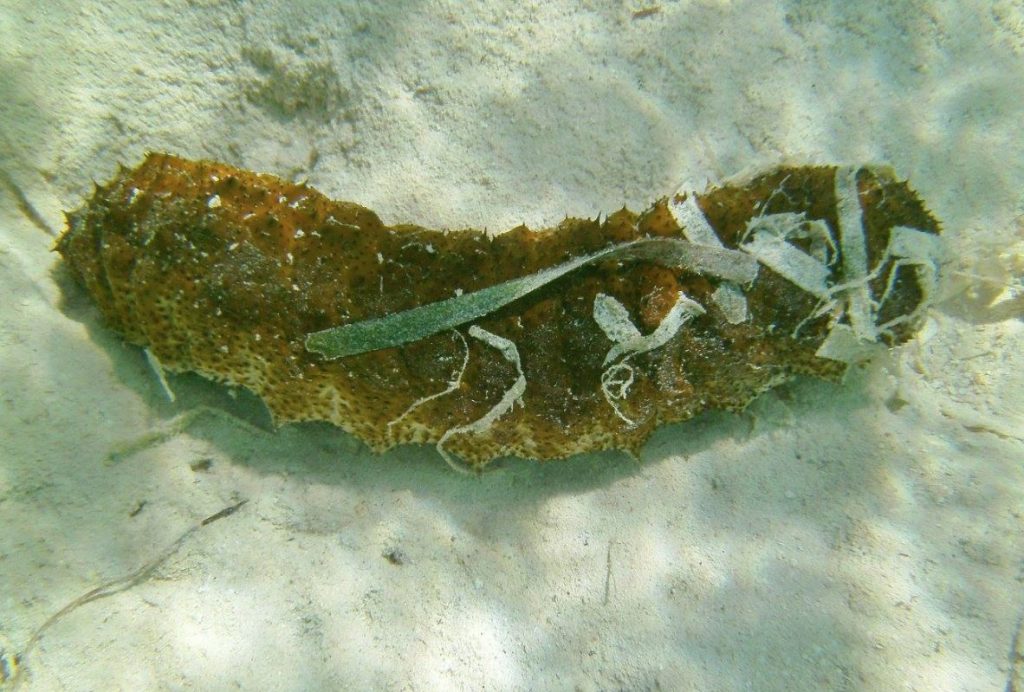 First thing we saw was a giant Sea Cucumber.  In Bonaire they were called Donkey Turds and I think that name is pretty appropriate, no? 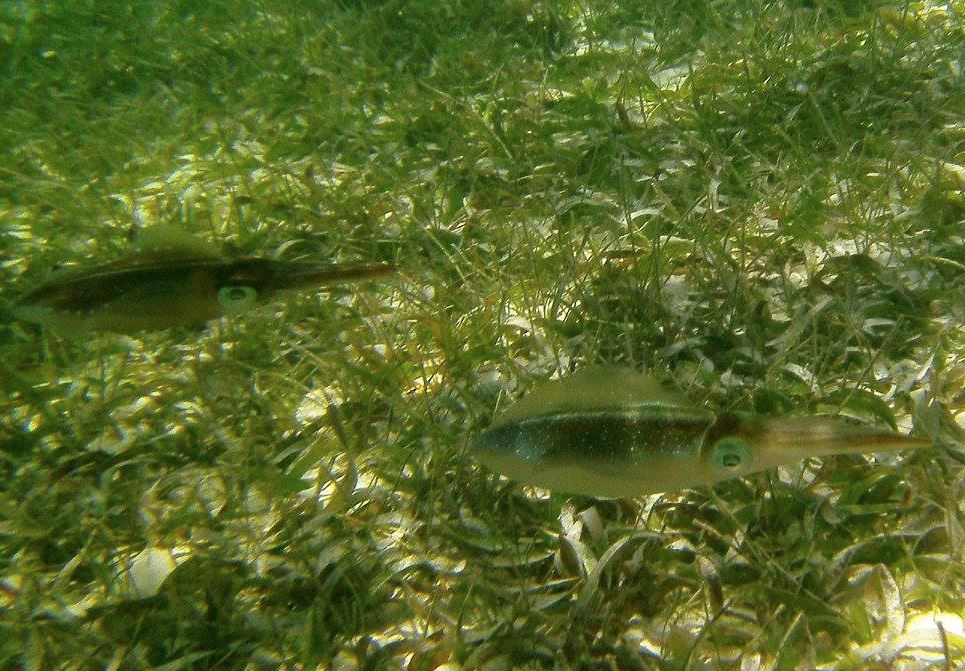 After a loooooong swim, I was excited to find a few squid.  Then I turned around and watched as a pod of like 40 of them swam away.  Sigh. 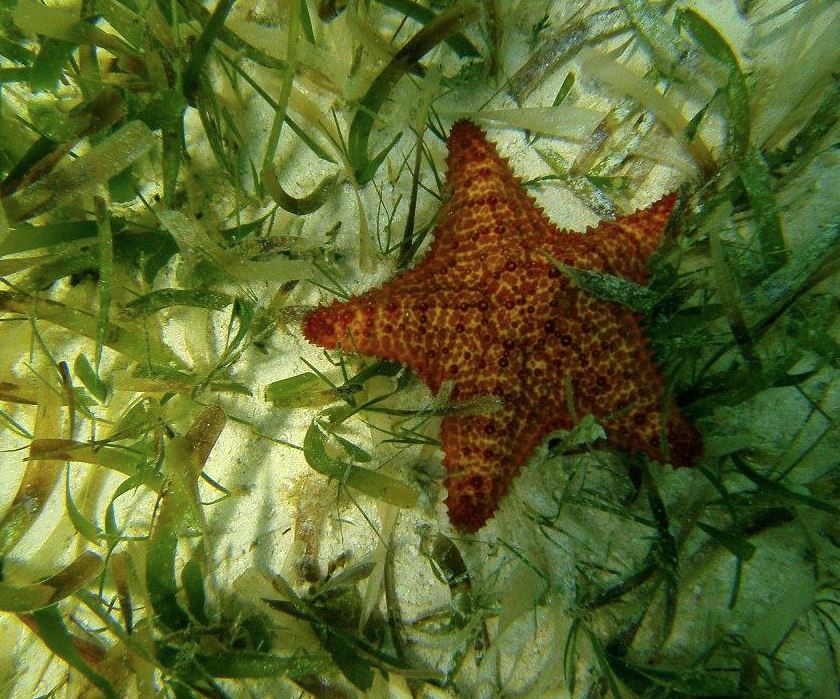 As we were coming back to the shore, we saw this pretty little starfish in just a few feet of water.

Then we found a beach (which may have been private) to cut across instead of the boat lane and walked across a road and more beaches and we were back at our Carribean Life beach area and our stuff was all there and we declined to go back out a second round because there was nothing near us, and we didn’t want to swim ANOTHER 2 miles.

I’m torn as to what I’d do if we go back here.  It was kinda fun to adventure snorkel but I really feel like there has to be a better place to go that doesn’t take a boat or a 45 minute cab ride each way.  And maybe it’s OK to take the cruise excursion where you only snorkel for 40 minutes if it’s more quality, and maybe it’s better to go to the zip line and waterpark instead or drink beers at the swim up bar in the port instead and call it a day.

Friday, Day 6 of the cruise in Cozumel, had an interesting start.  We made sure we were super early to the dive shop, which was in a resort… and they made us wait outside the complex.  And wait.  And wait.  Finally they told us to go down a path, and we found the wrong one which lead backstage to a show and were escorted out.  Then, we got escorted again to the right one (stupid Gringos), and hey, diveshop! 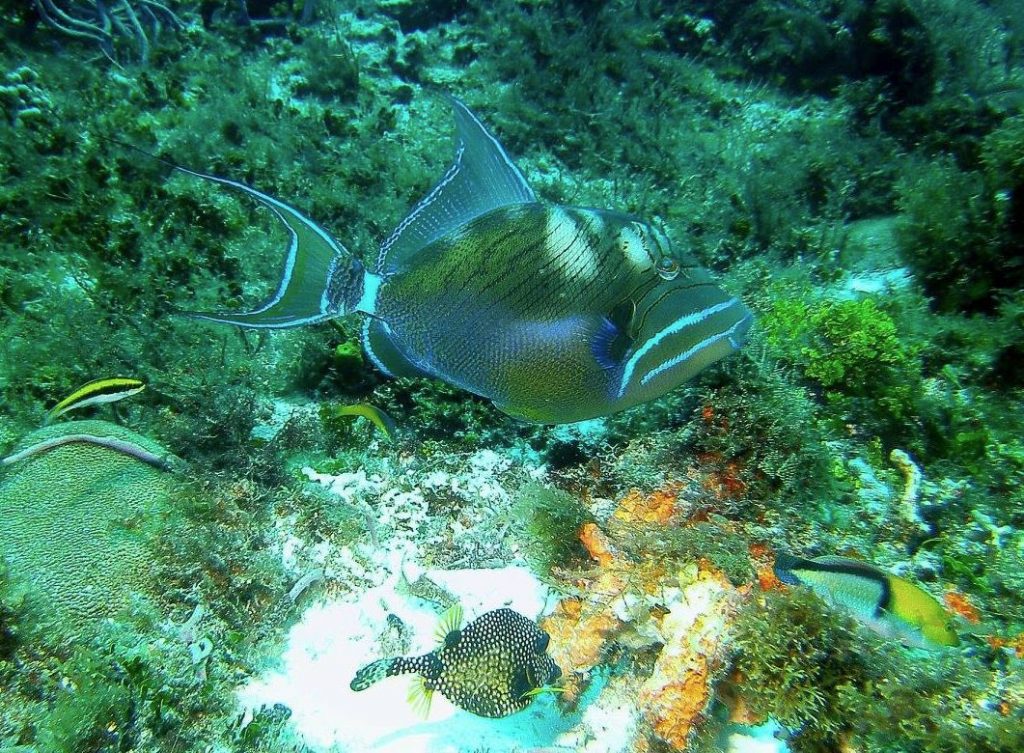 This may also be one of my other favorite pictures I’ve ever taken.  This Queen Triggerfish is gorgeous, super rare, and posing like a model for me.  Bonus boxy brown (spotted trunkfish) on the bottom as well! 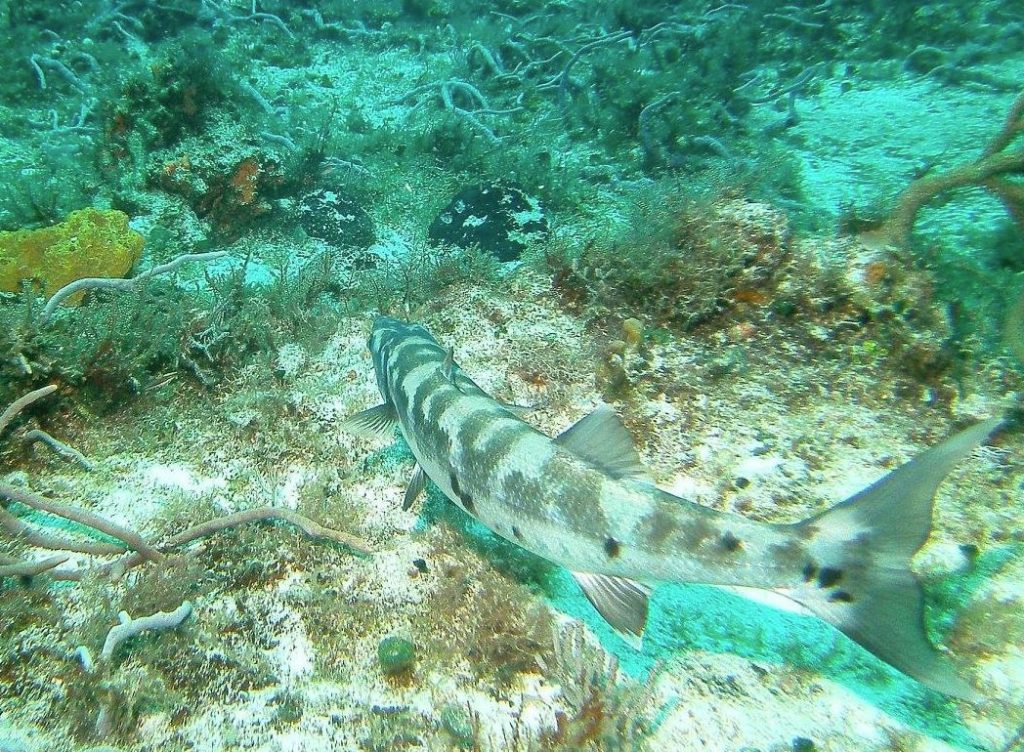 This Spotted Barracuda totally wanted me to follow him.  Probably as food not friend but I don’t know for sure! 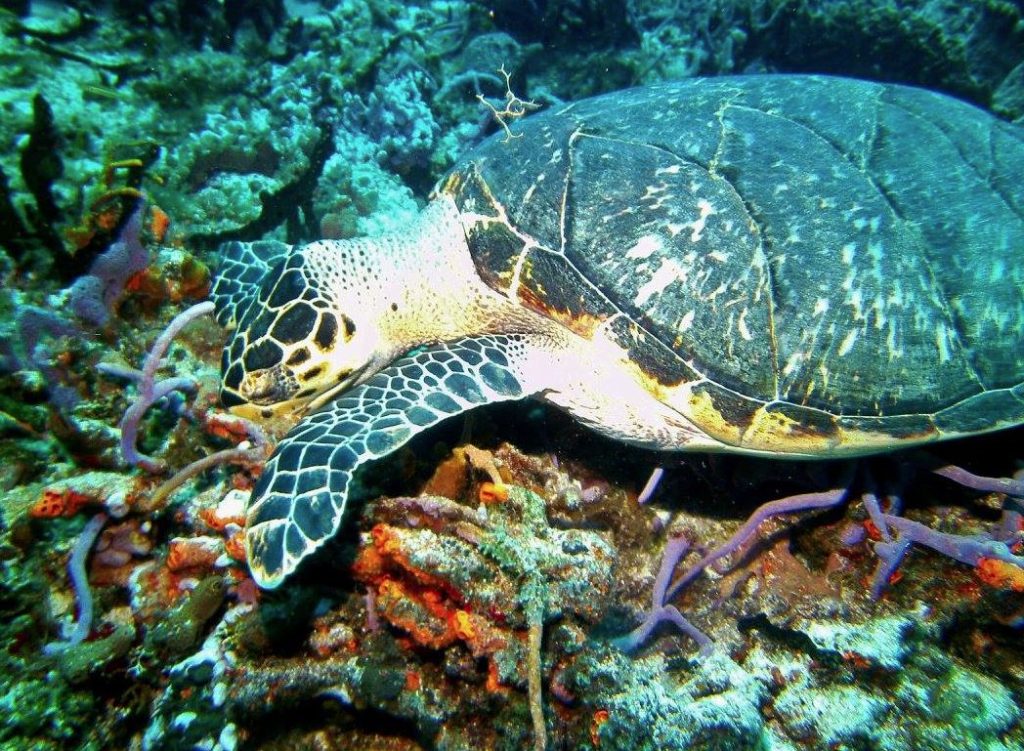 Tuuuuuuurtle!  I expended probably about a quarter of my tank kicking against the strong current to take another pass at this guy for a better picture, and I’m glad I did.  The lighting is great, if almost a little *too* bright. 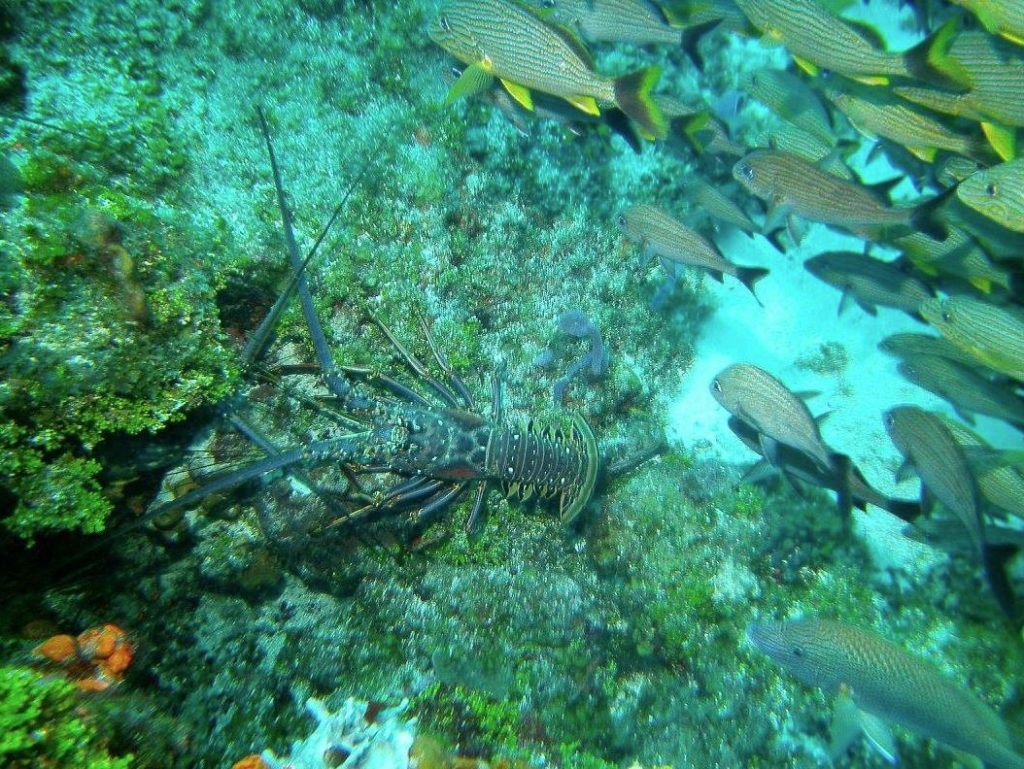 I wish I could have had a banana for scale (or anything, really), but this Lobster was multiple feet long.  It’s tail could have fed a family.  I’ve never seen a lobster so big! 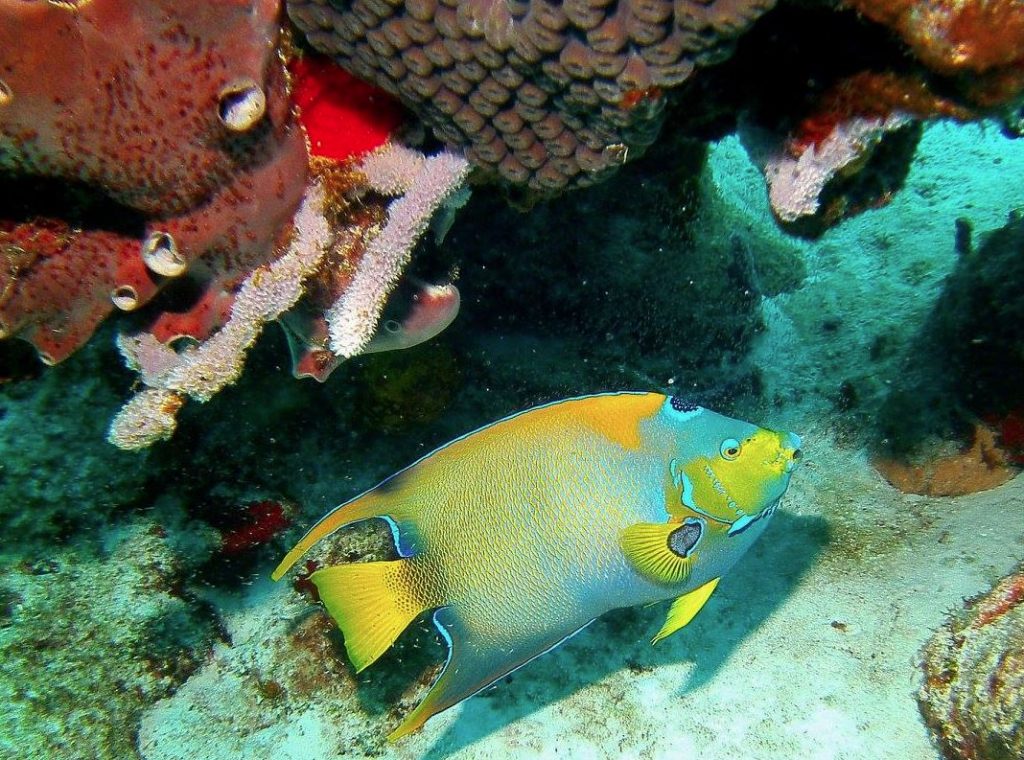 In this section, we went through some really gorgeous swim through areas which I attempted to not defile with my tank (and mostly succeeded).  This Blue Angelfish lead the way. 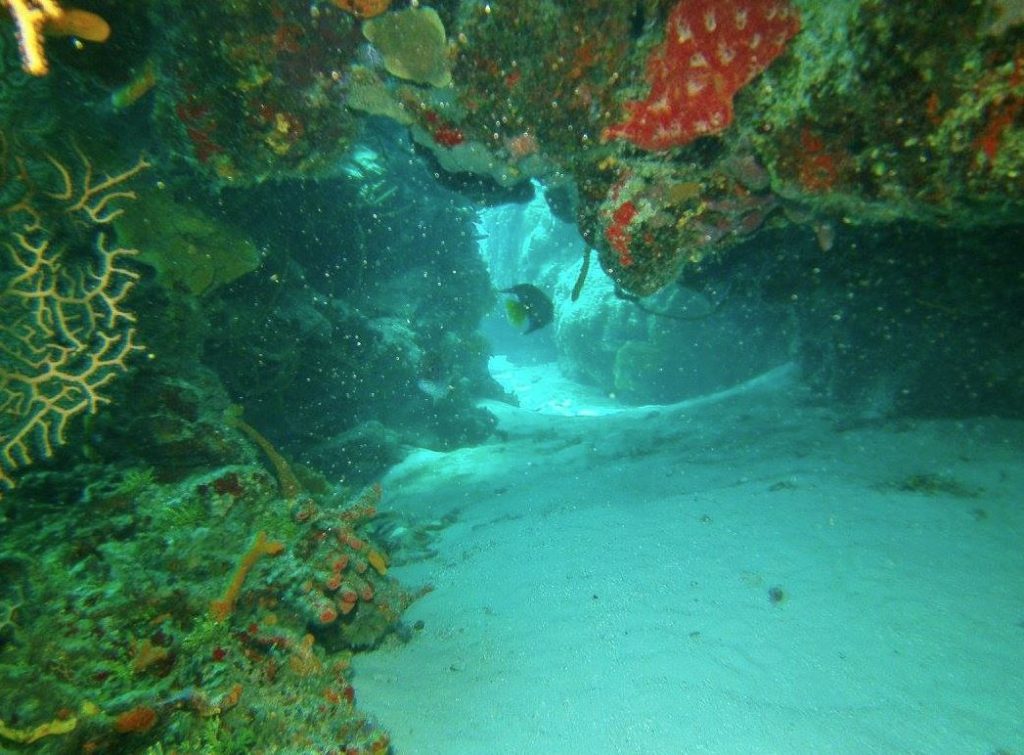 More swim through perspective.  This was a gorgeous section of the reef (and you can see our tour guide up ahead). 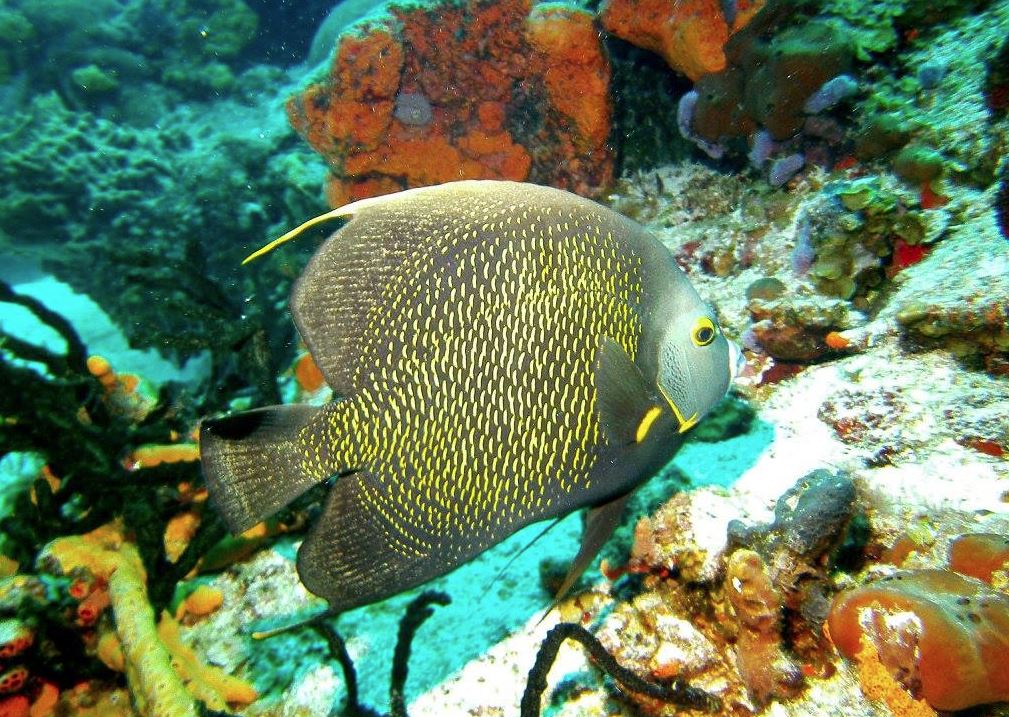 Again, showing off some goregous reef background with a French Angelfish friend.

All diving in Cozumel is drift diving.  We took some pretty significant rides.  The good thing is to progress forward with the current, you just have to relax.  The bad thing is when you want to see something specific not with the current, you have to kick like hell.  My back was not thrilled with that second situation but it was WORTH IT in some instances to get the shot.

My first drift dive in Coz a few years ago was not my favorite ever, but I feel like after this experience, it’s something I want to learn do right.  Like, with a multi-day trip.  Perhaps after a 70.3 next fall.  This plot may be hatching…

I will at this point direct you to my full album.  If you want to see more gorgeous reef, check it out.