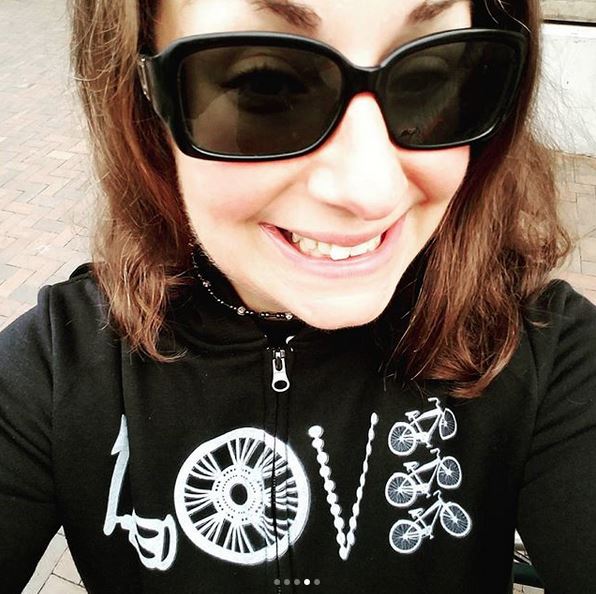 Normally, this would be sacrilege.  The initial reason for it was my bi-annual dentist appointment at 8am and I had to be up and out and not underfoot for our cleaning service at 9am anyway.  However, instead of looking at it as a drag, I figured it was a good opportunity to embark on a bike adventure.

The day started a little rough because I had a few too many beverages and stayed up too late the night before (it’s vacation!), and forgot my backpack (with my ID, credit card, etc) at home.  Not a big deal for the dentist appointment, which went quickly, smoothly, and was over with before 9am and paid up by insurance.  It was only kind of a big deal because I needed it for the rest of the day’s adventures and going back home meant I had to descend the half of Steck-o-slavakia I had already climbed and resummit it.

When I got home, I *almost* thought about just calling it.  The last three days I had spent at home, doing chores, writing my book, working through my To Do list, and I wasn’t even close to complete.  A whole extra day of progress, I thought, that would be incredibly valuable.  Then I realized that was bullshit.  This was my day.  I had been looking forward to this adventure for months.  The weather was AMAZING.  I was just being lazy.  So I grabbed my backpack and took off again.

I had an engagement after work in which I either had to meet Zliten at work at 6pm on my bike, or drive there in my car.  We all know I’m anti-car.  I’d rather bike the 11+ miles unless it was sleeting if I had the option.  So, I had and endpoint and about eight hours to kill with a few destinations:

Other than that, the town was my oyster.  I had my biggest backpack, the basket on my cruiser bike, a sunny day, enough layers to keep me as warm or cool as needed.  As I cruised down Jollyville with my stomach rumbling (I was approaching three hours awake, over 10 miles ridden, and zero food), I knew the first stop would be Rudy’s. 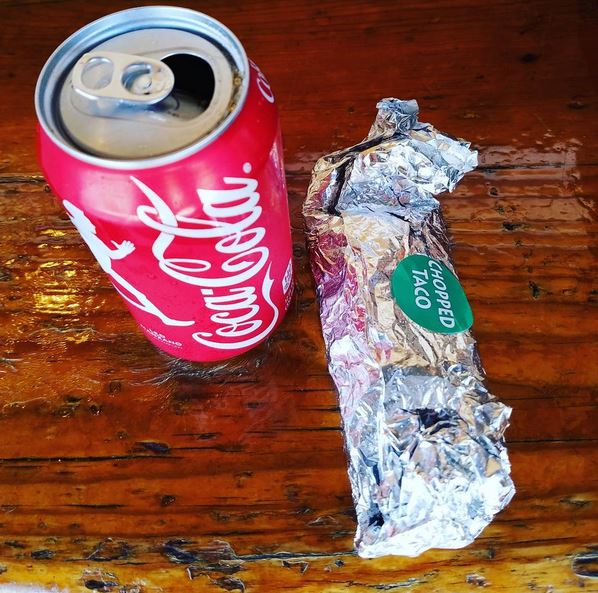 I pulled into the parking lot and practiced the ritual of the day.  Helmet off, in the basket.  Grab lock and wind it around my bike’s frame (not that anyone was looking to steal my 10 year old rusty Schwinn, my helmet with the headset is worth more than it is, but it would suck to be stuck about town without it).  Make sure to secure key somewhere I wouldn’t lose it.  Garmin off my bike and in my pocket or backpack.  Unzip phone from carrying case.  Switch out sunglasses for glasses.  It felt awkward at first because it’s been a while since I played cruiser bikes, but it became routine after a few stops.

The spicy, meaty, carby taco went down within a minute or so.  I splurged and sipped on a coke (I figured I could use the caffeine) while I tinkered with my phone, updating Zliten with my whereabouts, and surfing instagram.  While I didn’t want to spend all day on this bench, it was a breath of fresh air that I could.  After the conclusion of a very busy work year, a vacation that was FREAKING AMAZING but very active trying to cram in as much water time as possible, and three days of chores and productivity, it was refreshing to take fifteen minutes, just wasting my own time, with nothing, no one, and nowhere specific waiting on me.

My next planned stop was the gym, but I realized that I was also halfway to Cornucopia, one of our holiday traditions, so I set sail north instead of crossing under the freeway.  On the way, I realized that we needed to pick up the gift we’d booked on https://awesomestuff365.com/gifts-for-lawyers/, and I figured I’d pop in and take care of that.  An hour later, I emerged with a new pair of swimsuit bottoms, a black hoodie, some new shirts, yoga pants, and said gift card – after trying on a metric butt-load of coats I was hoping would look better than the one I had on (and none did, even if they were cute on the hanger… wah…).

On the way to Cornucopia, I noticed a new indian and BBQ restaurant.  I made a note to check it out later (and that was interesting when we did, but that’s another story), but I had lunch plans already and was full speed ahead to the ‘corn.  I intended on getting maybe 2-3 small bags of different flavors, but I went in hungry and tasted all of them about three times, ending up with six after narrowing it down.  I ate a LOT of popcorn over Christmas break.  Me: I want to try to maintain my weight loss over the holidays.  Also me: *buys approximately 100 cups of popcorn*.  Ah well.

At this point, my backpack is fully stuffed and part of my basket is taken as well.  I have to be careful about acquiring anything else large for the rest of the day.  My trunk, it has the junk. 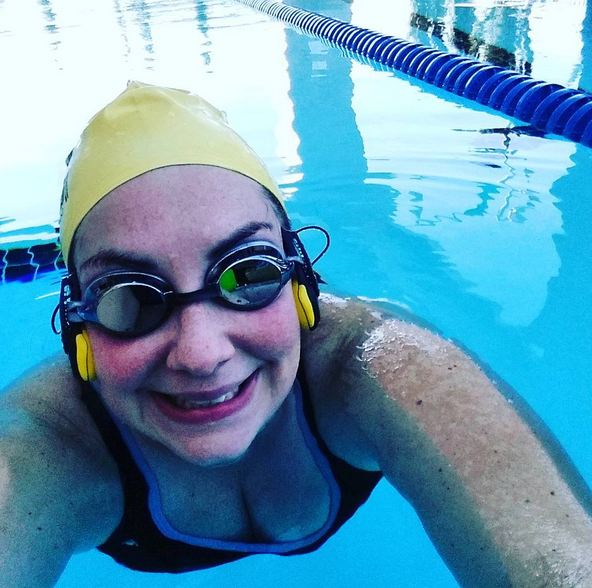 I headed back down south and hit the gym right around 1pm, which was perfect, because all the lunch swimmers were out of the water and I had a lovely pool almost completely to myself.  I’ll admit, on one taco and some popcorn, 90 minutes biking, five hours sleep, an a *wee* hangover from the night before, I was not 100% impressed with my performance, but considering the circumstances, 1k in a little over 19 minutes swim time was just fine.  When I changed back into my clothes, I couldn’t bear to put my jeans back on and was thankful that I had purchased a new pair of yoga-ish capri pants from Academy.

Finally, it was lunch time.  I finally had the opportunity to take the new pedestrian bridge from the quarry to the Domain, and I made it to the holy grail of ramen, Jinya.  Again, I was very glad I was “behind schedule” (I figured I’d be there closer to 12:30-1) because they were still busy and I snagged a seat at the bar.  I was waited on by the spitting image of one of my friends – she had the same look, personality, and even vocal tone.  I had a nice, leisurely lunch, revisiting a favorite meal of mine.  Honestly, if I had a top ten of all time, the spicy umami pork miso ramen would likely be somewhere on there. 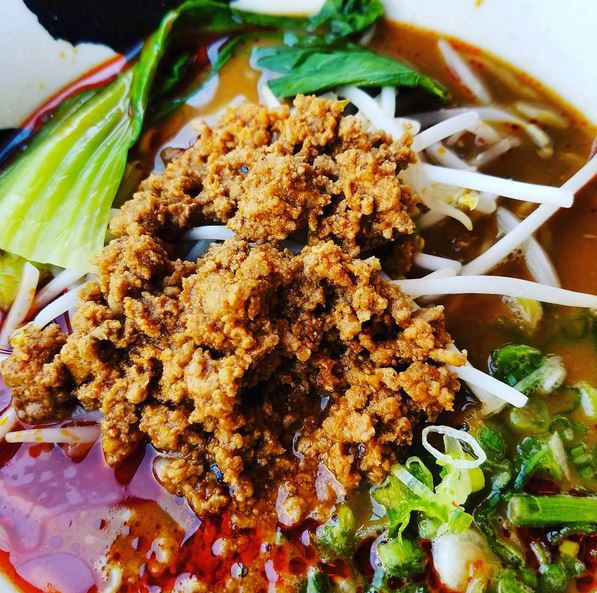 I was amazed with how my day had shrank so quickly from “how am I going to fill eight whole hours” to “oh my gosh, I need to leave here in about TWO hours and I could easily amuse myself for another eight”.  It was the ultimate day of freedom.  I am generally a solitary person, and I would have loved my partner in crime if he wasn’t stuck at work (I was doing my best to take him along with me via texts and pictures), but I was having a great day just hanging out with myself.  I was the opposite of lonely.  I was out and about, enjoying someone’s company I don’t often get to spend a whole day with (the last time was Ironman Texas, in a sense).

I popped my head into Bird’s Barbershop, since I had a free haircut coupon, but they were paaaaacked, so I figured that long hair is just fine for colder weather and I’d deal with my mop later.  I was on a mission to find some of the last gifts on my list, ones that I didn’t just want to order on Amazon.  I happened into a new store called Limbo, and found some very beautiful, extremely appropriate, if a little pricey, earrings.  I spent the next hour popping into a million different other stores and found nothing else that even came close, so I went back to Limbo (the first store I visited…) and had the pleasure of purchasing the earrings from the lady who made them and owned the store.  It was definitely worth the extra $$ to avoid the cheap, mass produced crap and get the perfect gifts.

The Domain, that day, had began it’s transformation from work to play for me.  While my old work building loomed in the distance, and I remembered some of the times I walked out of that building to take a walk on those same streets to clear my head, sometimes during the roughest periods not *entirely* sure I could make myself go back, six months of distance definitely helped (and things have been MUCH better since then for me).  I don’t miss the traffic, the rude people, the middle-aged pillheads, and that finding lunch under 10$ a plate is laughable, but as an entertainment destination, it’s a lot of fun. 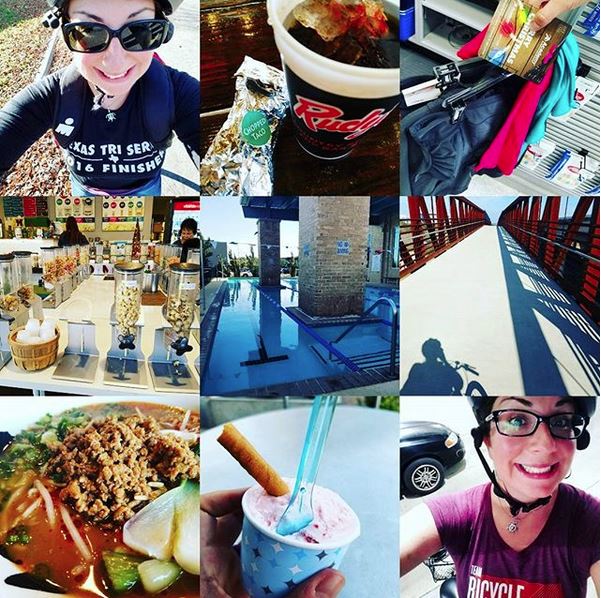 After I got the gifts worked out, I did a little looking for myself and actually had some restraint, and settled on some peppermint gelato as a snack and fuel for the next bike leg.  I figured I was 7-8 miles away from new work, but I miscalculated and I was almost 11 – plus it was getting windy (and I was heading into it) and daylight was not on my side.  Along with that, I had been on my feet or pedals pretty much all day, so I was not making great time.  This was the first time all day since Steck-o-slavakia that felt like work and took me a little over an hour to roll into the parking lot, when I anticipated maybe 40-45 minutes.  Since it was the shortest day of the year, I was pushing it for the last 15 minutes and it was flat out DARK for the last five.  And, I left my lights at home.  Oops.

I snuck in one more gift shopping stop in our area and met up with Zliten as he left work.  Unfortunately, I forgot to stop my garmin so I don’t have an exact mileage or time, but I think it was about 28 miles in about 2 hours and 45 minutes, both of which are a PR on my cruiser bike.

So far, the last two years, I’ve had a bike adventure day on the winter solstice.  I think it’s a fun tradition, bucking the motivation just to stay inside, curled up in bed with a blanket.  For months, I’ve watched the sun dip lower in the sky earlier and earlier, and this is the day I’m out playing bikes celebrating the fact that IT JUST GETS BETTER FROM HERE!!! 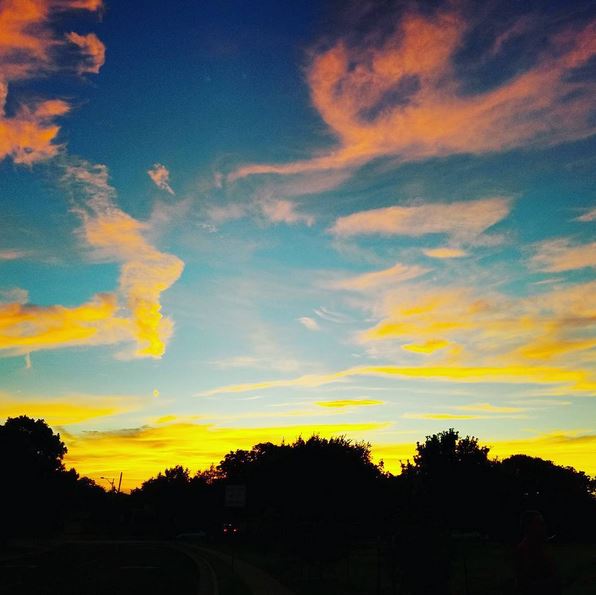