In Jan 2007, I awoke from my bed in San Diego morbidly obese at 265 lbs (estimated with rate of loss – I didn’t get a scale until 250s but anyhoo… I’m easily distractable today so expect lots of parens…).  My main priorities in life were work, work, work, and figuring out the easiest way to get through life without moving my body much. 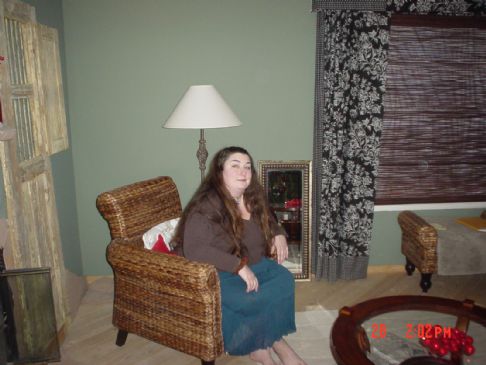 Yes, I’m making light, but seriously, my idea of a perfect weekend was not leaving the house in my pajamas, moving only from the bed to our office and to the couch.  We were in a 600 sq foot apartment, so it wasn’t very far.  I wore stretchy skirts and shirts so I could avoid the plus size stores.  XXL at mervyns and target were my friends.  If you didn’t shop in the plus size stores or sections, you weren’t fat, right?  Denial ain’t just a river in Egypt folks…

However, that river ends.  Late 2006, we ended up taking a trip north to San Francisco for a friend’s wedding which necessitated jeans.  I didn’t own any.  I went and tried on 16s, then 18s, then was shocked to find that 24s fit me (and were even TIGHT).  Well, I certainly couldn’t be that plus size, so I resolved when I got back to really do it this time, buck the odds working in the video game industry (long hours sitting on my ass and unhealthy crunch food, oh my!), and lose weight!  Not the most epic reason for the epiphany, but whatever works, right?

I also resolved to work a 40 hour week instead of the 80-100 I was imposing on myself.  I was doing so much fast forward it wasn’t funny, and it never got to the good part when everything was sunshine and rainbows.

Early 2007, I got a good start taking down 25 lbs and then went on vacation and job hunted – once I wasn’t so caught up in my own work involvement and drama, I realized that I needed to move on (amicably), both professionally and location-wise.  This stalled weight loss.  Always in my life, anything that wasn’t optimal conditions stalled weight loss.

I relocated, I rejobbed, and BAM! My first week, I got a stomach bug that took me down 10 lbs in 5 days.  At that point, I had made peace with my 240 lb-ish self until “things settled down”, but some old jeans at my 230-ish self fit.  Of course, when the weight came back on and they didn’t fit anymore, I was sorta sadface, and thought, “Hmmm, there must be a way to do this without eating only Gatorade and saltines…”

After research, I found www.sparkpeople.com (I’m not paid, just a fan).  This was the “hacker diet” I had read and liked the idea of, without having to mess with my own spreadsheets.  I decided I would give spark a month and do whatever it said.  Looking back at what I was eating back then, it was utter junk, but it was LESS utter junk – in general around 1200-1500 most days, more on weekends.  Seriously though – how did I eat a PIECE OF FRUIT or a 100 CAL YOPLAIT for breakfast?  I would FAINT DEAD AWAY on that nowadays…

Also, sparkpeople said to do 20 mins of cardio 3 times per week, and 15 mins of weights 3 times per week.  I remember thinking “geez, this is a lot, how will I make this a habit?  This isn’t doable forever…”  I elipticaled Tu/W/Th to give myself maximum vacation from the “suck” that was cardio and did weights M/W/F.  On Wednesdays, I had to do a 35 minute workout.  This was SO MUCH TIME to dedicate.  I didn’t enjoy one bit of it, but spark said to do it so I did.

After one month, I had lost just about the same amount I did being sick, and I felt great!  Progress is the best motivator, so I kept at it.  I knew I had a long while to go, so I just dug in and kept going.

I wish I could share with you what a struggle it was to go from 240 to 170.  I would love to give you a dramatic play by play of what I gave up and my journey from junk food junkie to organic goddess, but that’s just not how it played out.  I spent August 2007 to August 2008 eating pretty much the same things, just less of them, and making myself do cardio and weights 3-4 times per week.  The scale went down pretty much every week, sometimes 0.2 lbs, sometimes 2.0, but I rarely had a gain or maintain week.  Once I got the inertia going, it was almost effortless.  I lost 70 lbs just by counting calories, most of the time keeping them under 1500 with some splurge-y days, and doing said workout schedule above.  I still smoked, albeit less and less, and I still got drunk, but less often, I still ate cake, but smaller pieces, and still ate tacos plates, but had the rest of my day healthy.

Racing was but a glimmer in my eye, and my only real goal was to make the scale go down, but somewhere in there I found a little joy and feeling of accomplishment in the workouts themselves.  And down it went until I got stuck.

Around 170 I had a bit of a plateau, but I attributed it it over a year of steady weight loss and just being TIRED of it.  I took a few months to maintain and give myself a break, and then refocused in Dec 2008 and continued the loss to April 2009 when I hit my low of 150.2.

April 2009 was also the month I started to train for my first half marathon.  I had run a 5k and got hooked.  I saw a “train for a hlaf marathon” plan in a magazine and figured “why not”.  I did another 5k and then a 10k before the race.  By the time I ran the race, I was 155 – one cannot train for a half marathon on 1200-1500 calories, and I didn’t count calories.  After two years of restriction, I’m pretty sure I just went crazy.  Can’t say that I looked anything but awesome though… 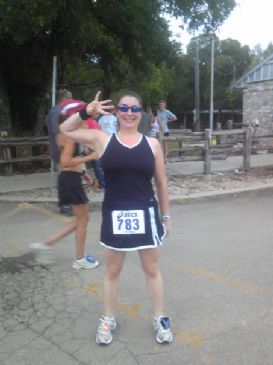 Besides about 2-3 weeks of pre-wedding crash diet where I got back down to 152 (and then spent a few days partying in Vegas pre-wedding, I’m lucky my wedding dress fit, heh), I’d never see the low 150s again.  By the time I ran my second half in Feb 2010, I was just about 160.  By the time I ran my third half and got through my first tri season in Nov 2010, I was 165.  I didn’t like the trend, but I still liked the way I looked in the mirror and loved what my body could do!  I PR’d a half marathon!  I was a triathlete!  I was unstoppable!

Last year, I’m not sure WTF happened.  I gained some weight when I hurt my back and couldn’t do much (170), and actually gained another 5 lbs trying to figure out my nutrition over the summer that never really came back off.  It’s a bizarre feeling having your insides feel awesome and healthy and athlete-y and having your outsides just keep.getting.bigger.  I can also credit just not being ready to put in the “do whatever it takes”.  I wanted cake more than I wanted to lose weight.  We raced A LOT this year and did a lot of long weekend training.  With that, however, came a lot of “OMG I just spent 2 hours on the bike and ran a 5k I’m going to eat and drink all the things for the rest of the weekend”.  I am living proof that you can absolutely outeat your training.  A lot.  However, I PR’d my sprint tri (did 3 total), I ran 2 half marathons, helped support Zliten becoming a full on triathlon and race addict like I am, and did other various and sundry 5ks, mud runs, and duathlons (PR’d that too!).  2011 was an awesome year – just not on the weight loss front.

Here we are at 2012.  I feel like something has awoken.  That patient determination, that something is wrong enough that I’ll do what it takes even if it’s hard (why I couldn’t do this at 5-10 lbs gained, I don’t know).  That I know I can’t just lose this weight in a month.  That I need to make some hard choices sometimes and focus on priorities.  That I probably need to continue tracking my food and calories for a while, and it may be doubly important during training season to make sure I’m not over/under eating.  That I’ll always feel like I can outtrain my food and it’s JUST NOT THE CASE.  That it’s unfair that a lot of people can eat more junk food than me and look like uber athletes.  This is my reality and I can accept it.

It’s not that I eat one slice of pizza and gain 10 lbs.  I can indulge for a birthday or a vacation or even because it’s Saturday and I’ve been good all week.  I’m not destined to a life of militant abstination from anything but veggies and chicken.  However, it has to be the exception and not the rule.

I’m starting the game over, the wakeup call I had in Jan 2007, but this time, the game has changed.

-MORE DIFFICULT: There are some foods off limits.  Instead of just a calorie goal, I also have my ratios (3-4 protein, 1-2 nuts, 4 oils, 1 grain, 1 carrot/corn/potato, 1 dairy), PLUS I’m trying to eat as much organic, non-GMO, no hormones/antibiotic, and 8-ingredients-or-less foods.  In 2007, my requirement was just less foods.

-LESS DIFFICULT: I’ve proven to myself that I could lose weight, fairly recently.  I haven’t only lost weight due to starvation or an accident.  I know it’s possible.  I just have to be willing to do whatever it takes.

-MORE DIFFICULT: Before, if I was feeling hungry, I could just go smoke, or get caffeinated, or just deal with it.  However, hunger made me kind of brain dead and weak.  You can’t get 100% out of training hungry and having given up smoking and caffeine (both for the most part), I have to really manage my hunger so it’s not crippling.  I have yet to have a day where 1600 calories is REALLY REALLY not enough, but I know that day will come, and I will need to figure out a better coping mechanism.

-LESS DIFFICULT: I only have to lose 25 or so, rather than OVER 100.  While needing to lose 100 lbs really impressed upon myself the seriousness of my condition, it also was a daunting, multi-year task.  If I really buckle down and stay on the straight and narrow, I could be onto the maintain part of this process by summer.

The point of this is to both to…

a) remind myself that I’ve come a long way, and if I can lose 100 lbs, anyone can.  It just takes the full and true WANT to do it.

So yes, time to wake up and smell the coffee before I’m 250 lbs again and wondering what happened.  Starting next week, expect accountability and progress!

To Run, or Not to Run (Opposite Day)