Oh, taper madness.  Combine you with hormones, work stress, personal stress, and a whole bunch of other shit, and you’re a raging bitch.

I think my problem is the opposite of many other people though – it’s not that I’m going mad because I’m running less, it’s that I’m going mad because I’ve told myself “taper is starting”, and somehow I expect that first week to be a breath of fresh air.  It’s not.  I’m training just a little less than I was at peak, and for stressed and exhausted me, that wasn’t little enough.

But, let’s go back, because the last peak week was AWESOME.

My last peak week was something of perfection.  The weather was pretty damn perfect, my legs felt fatigued but never ready to collapse, and my paces were pretty much spot on to support what I want to run in two weeks.  I was even feeling so confident, that I decided we should do a run-venture instead of sticking to normal territory for our second 20 miler, and beat the time of our first by 7 mins.  We had an epic day and it was a blast and definitely the stuff memories are made out of, and it was wonderful.

I breathed a sigh of relief that I had made it to taper – not remembering a few key things:

1. Taper is STILL way more run volume that I’ve been doing all year outside of the last month and a half.

2. Work went from about a 5 stress level to 11 and hasn’t let up.  Zliten’s work stress did about the same thing at the same time.

3. Lots of non-work, non-running related projects and things to take care of, that I’ve been ignoring and haven’t had time to do because I’ve been running, working, recovering, or trying to squeeze in some social time – they’ve become a lot more critical because we have family coming into town for Thanksgiving this Thursday.  Let’s also put this out there that I don’t WANT to do any of these.  I want to “mark them all as read” and make them go away.

4.  This all leaves ZERO, or possibly negative time for down time and relaxing.

5.  Everything we own is falling apart, and nothing is working right.  Between electronics and house shit, it’s been a MAJORLY expensive month.

I had to do a lot of interesting juggling of workout times (i ran on the treadmill at the gym twice in one day), but I made it through all ~20 of my weekday miles by hook or crook and was pretty proud of myself.

Then, I had a major meltdown on Thursday night which resulted in some major carnage on my hand, a damaged dresser that was totally innocent, but the wall I put my foot and fist through TOTALLY deserved it.  Then I went and sobbed for about an hour (me = totally not a crier so this is NOT normal) and didn’t sleep but about 3 hours that night.  It was about 25% due to the few drinks I had, but I remember everything and wasn’t super drunk, and it really was just about needing to release some MAJOR rage in a way that I couldn’t any other way, I guess.

Normally after all that, you’d call in sick to work, right?  Wrong.  Not when you’re doing your biggest release of the year and it went live at 3am (while you were huddled on the couch sobbing because nothing was working, life wasn’t fair, and you wanted all your responsibilities to go away just for a darn minute).  I hobbled mentally through the day and it wasn’t too terrible and was able to get through without any more walls asking for it, and attended a friend’s birthday party that evening, but once I got home and hit the bed I slept for almost TWELVE hours.

I woke from that sleep still feeling mentally and physically fragile, so I bagged the run.  I didn’t want to play catch up on recovery by doing it Sunday, and I could tell both my body and mind needed a break.  I didn’t want to limp through my last long run of the cycle and have that be on my mind marathon morning.  I want that super strong and fun 20 miler to be the last one.  So, we spent the weekend tackling those projects we had been ignoring, and I got in 38 easy trainer miles on Sunday night watching a movie.

While I hate that I missed a major run, I’ve been pretty darn consistent this cycle.  Over the 6 weeks of training, I’ve cut 3 runs short (finished at least 3/4 of them, but cut them due to time constraints), and skipped 2 runs (this one and a 5 miler) and subbed 30+ bike miles instead each time.

I feel way better about life this week, and one benefit of skipping Saturday’s run is my legs feel WAY fresh and rested much earlier in the taper cycle (whether that’s a good or bad thing is TBD, I just know I’m going to need to watch myself and not go thrash them again).  I’m ready to attack this last week of reduced training and hit my paces, and then rest up and rock out a great marathon.

Let’s just say that I haven’t weighed very regularly, and I haven’t really been good at any sort of diet quality.  After my boom splat on Thursday night, I decided the last thing I needed to do was stress about food so I didn’t even track all weekend.  I wasn’t keen to get on the scale right then as it was that super bloaty gross time of the month, so I gave myself a few days to not feel like a water bag and have eaten some fruits and veggies.  I finally got back on the scale today and it said: 176.0.  So I haven’t done any major damage, and it’s time to really clean up my eating and make sure my weight stays stable (or better) through taper time.

It’s bizarre.  I held really strong through Halloween, but this month, I’ve got all this candy around and it’s been magically shoveling itself into my mouth. Today, it all went into the bike food box which I cannot touch unless I’m biking.  At least then I won’t be sitting on my ass eating candy corn, I’ll be pedaling.  I may be a little more hooked on the white pony than I’d like to admit and it may be time to be a little harsher with myself than I have been to make sure that one that I’m not at least 30% composed of mellow-creme pumpkins.

Now, it’s time to really kick the sweets, the refined grains, and get on with being composed of beans and whole grains and fage and fruit and veggies and some meat and some nuts and feeling super again!

Here’s the deets (I retroactively added last weekend’s food from memory, so it’s probably a rough estimate at best, but oddly enough, even though I just DIDN’T CARE and ate what I wanted, the deficit ended up being just about the same over the course of the week, just not on the right days…). 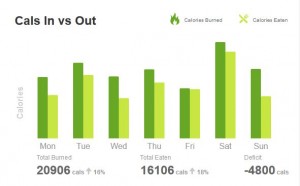 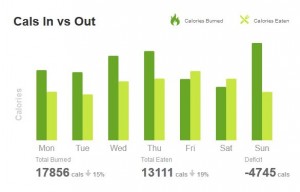 -My review of Birds Barber shop was the review of the day on Yelp for Austin last Thursday!  That came on a pretty rough day so it made me happy!

-I actually sewed!  I made a remote holder for our bedroom for our headboard (that matches it), and mended a bunch of stuff I’ve been meaning to patch up – which means I got two pairs of running capris back.  Wheee!  I have a few more projects I hope to get done this month but at least I friggin sewed!

-My work deadline, the game release, finally happened!  We’re doing a little post-release clean up, but so far, things are looking really, really good and I’m hoping within the next week things will go back down from 11 to, like 5.  I can handle 5. 🙂  Making other people happy and giving them fun stuff to do is worth the stress, but dang, it’s hard to see the other side sometimes when you are down in it.

Aight, time to get back on with this week.  Less candy, more happy.

Question of the week: what’s your favorite candy/indulgence?

Marathon Week: To Battle (With my Brain)