When last we spoke, I was boarding an airplane from Portland to San Jose. 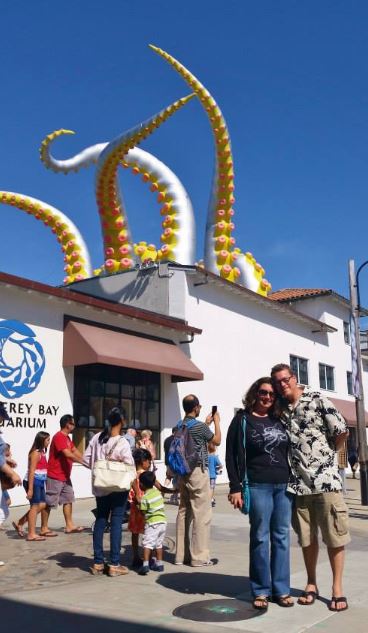 The flight was entirely uneventful.  We emerged on the other side, hugged Zliten’s parents, who had been at the airport for, like, 4 hours.  They expected traffic and hit NONE so they just spent the afternoon reading and drinking coffee.  We loaded up our suitcases into their truck, and drove down to our condo on the beach.

We passed a lot of farmland and a lot of middle-of-nowhere and I was a little skeptical until we rolled into the condo and saw the sunset over the beach from our balcony and all was legit with the world. 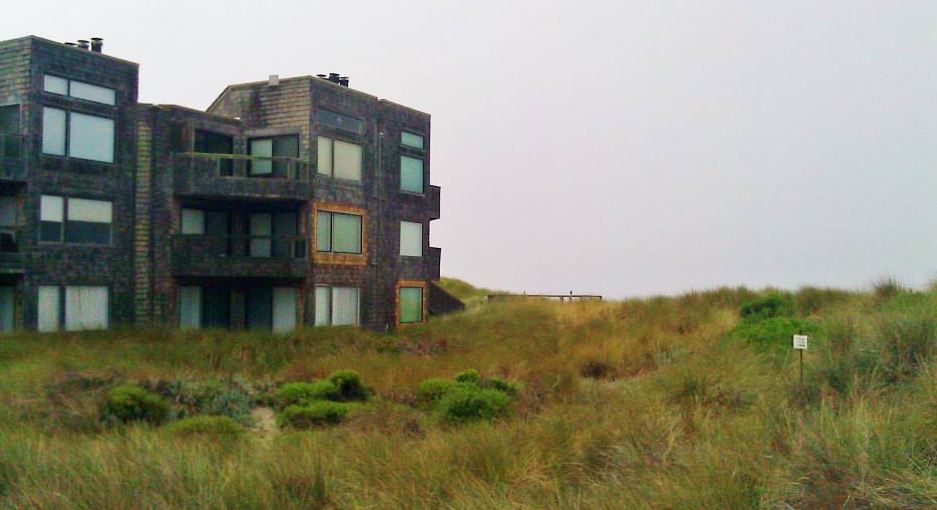 They had taken it upon themselves to bring food in a giant cooler for all the meals and a bunch of snacks.  It was 80% super duper thoughtful and 20% tricky for us because of food allergies/preferences/I need some goddamn veggies or I go crazy.  We had super yummy burritos the first night (regular white flour tortilla – such a splurge…) and chips and salsa and guac.  I also probably ate my weight in peanut m and ms and chex mix and trail mix over the three days we were there because they were just there.  Sigh.  Between that and the all the previous beer, the scale and I STILL are not friends.

We played hand and foot – Zliten’s dad and I sort of dominated both games, and then we crawled into the highest bed ever. I’m not kidding, it had a step stool to get into. 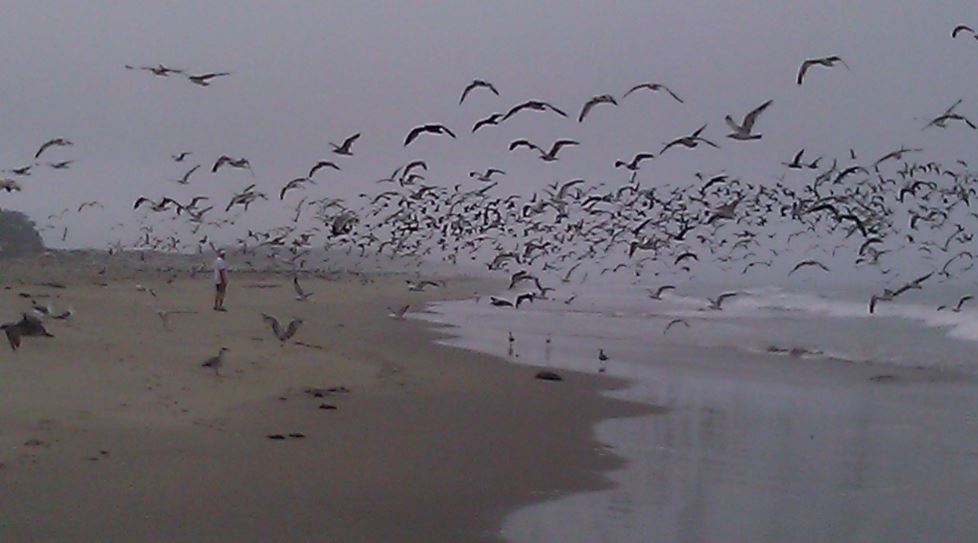 The next morning, we made sure to take time to get a short beach run in.  I made up songs about the bird collectives that were hanging out on the beach (which made me think of Oiselle) and then on the way back Zliten stomped through their territory and made them all scatter.  I was worried, but not an ounce of bird shit soiled his clothes.  I think we may have spent a few karma points there. 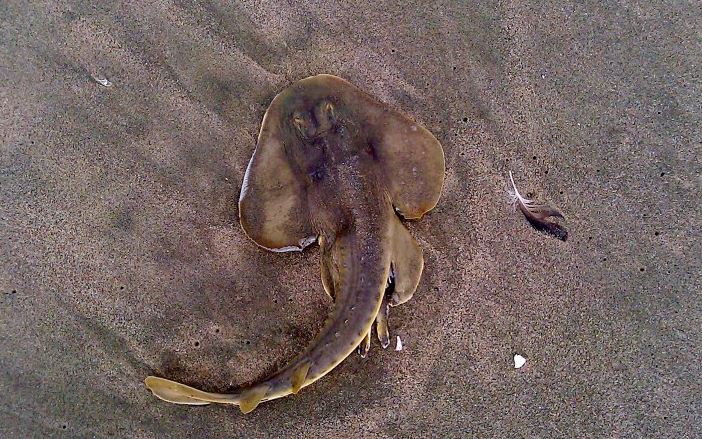 I found a bunch of really in tact sand dollars and ran with one for a few miles to bring it home with me.  Also, we found a dead guitar shark (it has another name but come on… looks like a guitar shark) on the beach.  After a half hour of awesomely slow beach running in beautiful cloudy and 60s temps, I took off my shoes and got in for a Pacific ice bath for a few minutes.  So, so, so good.  I wish I could do that every morning after my summer runs instead of jumping into a not-cold shower all the way turned cold.  *insert wistful sigh here*

We ate some breakfast after – I made myself a big bowl of veggies and dip and had some trail mix and some fruit.  We played some more games (more winning) and then took a walk on the beach with the ‘rents.  We ended up going really far down and back, and took about an hour and a half – in the middle of the day – which meant a really wicked sunburn. Oops.  It was a really nice walk though, it was this weird dance of Zliten’s mom not wanting to get her feet wet and I pretty much wanted to be in the ocean the entire time, so lots of zig zagging to the water and back.

The whole vacation we had been craving pizza and holding out, and they had Round Table in the area (one of the pizza chains I’m assuming is only on the west coast), so we indulged.  I got a small supreme and Zliten and the family got a hawaiian and we snacked on it all vacation.  Ah, pizza.  Love it. The rest of the night was games and family time, after a quick break to watch the sunset. 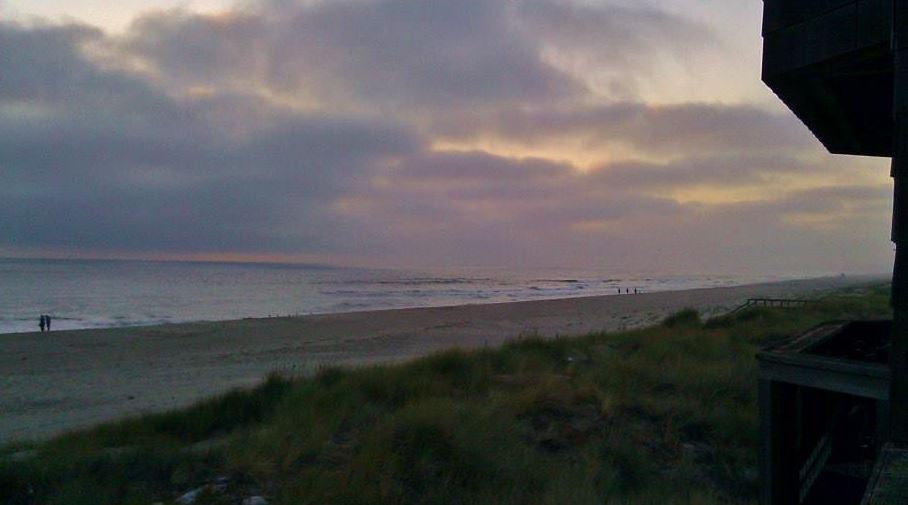 Friday was our last full day of vacay, but it was to be one of the best… we were going to Monterey Bay aquarium!  First, another beach run.  Gorgeous.  Then we took the hour drive down and spent the afternoon at the aquarium.  Picture ‘splosion below.   I took soooo many, running multiple cameras out of juice, but here’s my fave few. 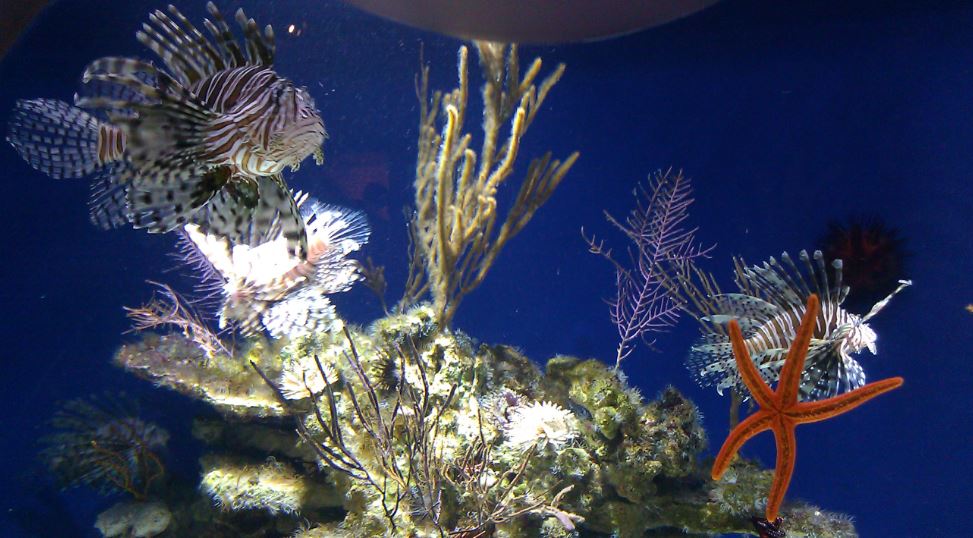 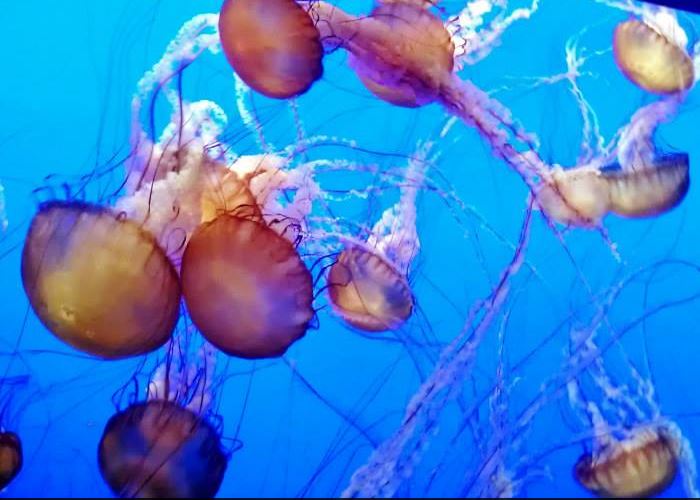 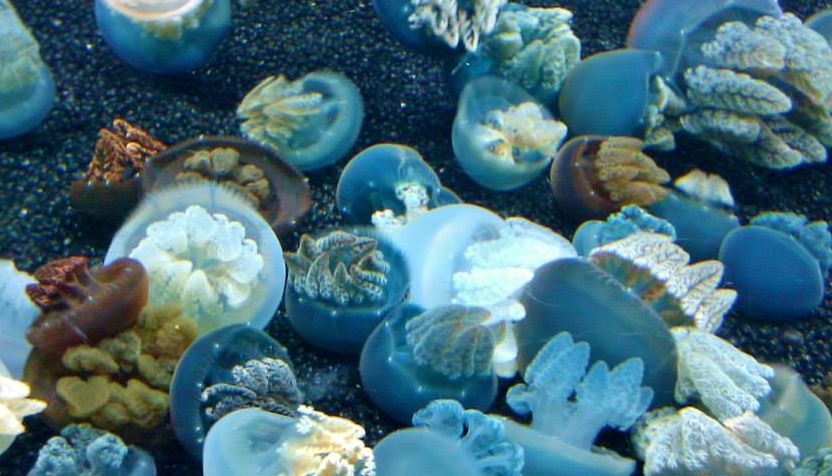 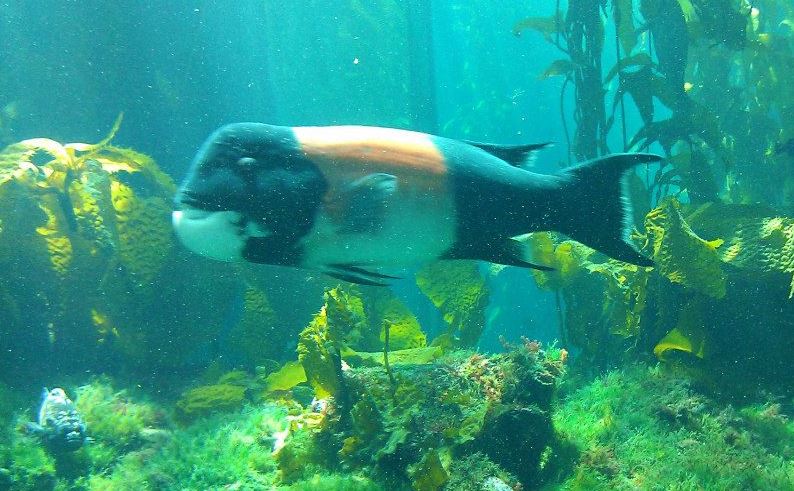 California sheephead fish.  Took FOREVER to get a decent picture, they swim fast! 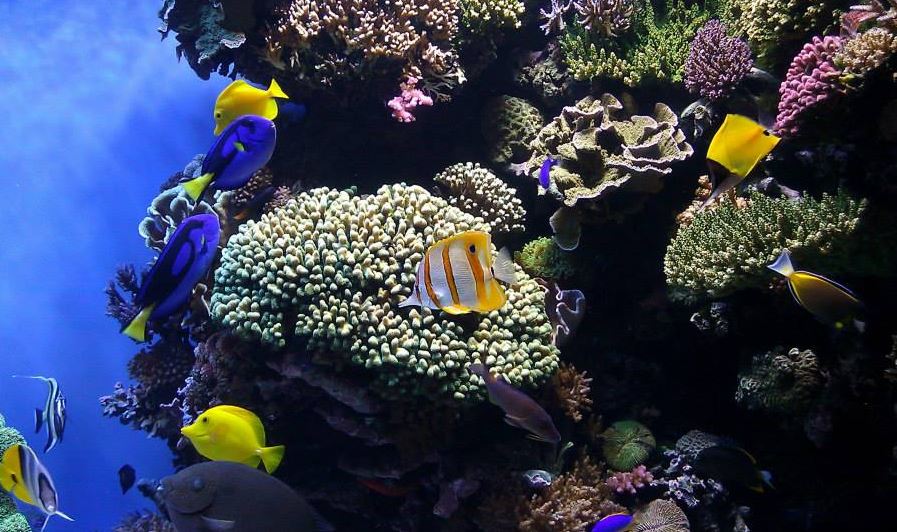 Assorted tropical fishies – the kind which we see when snorkeling in the Caribbean (which made us wish we were snorkeling). 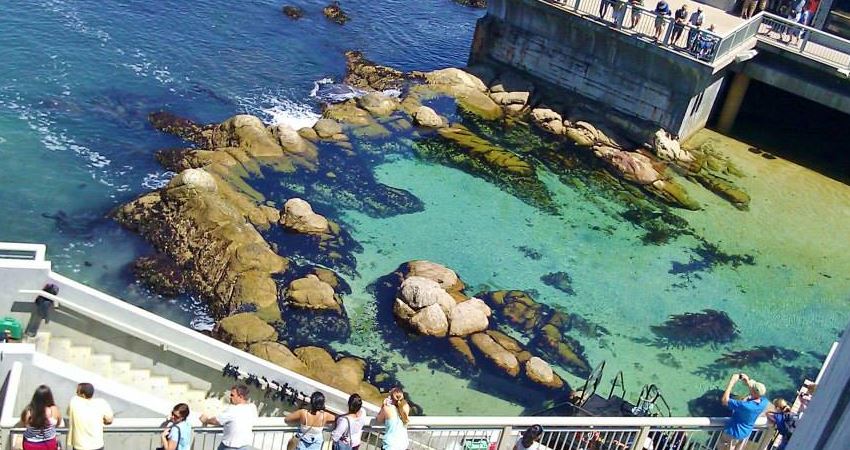 After a much needed fish taco stop and loooooong drive home in traffic we made it back to our dunes.  The night held more games, chicken cheesesteaks (on white rolls – again, super splurge), and another break to try to watch the sunset from the deck.  It was cloudy, so not quite as impressive, but watching the sun go down over the ocean is never a disappointment. 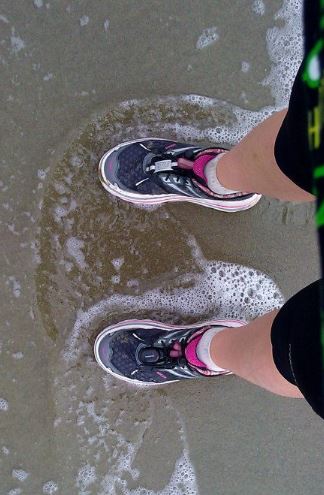 Saturday morning we took one more quick run – we needed detergent to finish some wash, so we ran through the national park to get to the condo office, and then the beach on the way back.  I took one more dip in the ocean in my run clothes, and then went and spent some time on the deck – apparently there were some dolphins playing right near where we were splashing.  Awesome!

We got packed up and said goodbye to our home in the dunes and headed to the airport through a mountain so we could see something different, and then (after a long day of travel ending about midnight), we were home.

I really enjoyed spending time with so many people in so many locations, but it was hard to really settle into vacation mode packing up and changing home bases so often.  Still, lots of fun and it was exciting to run and swim and explore three new places in a week!

(…and yes, now that I’ve been back 5 weeks, I’ve finally wrapped it up, never say I’m not timely!)