Week in the life

I try to get here once a week to document what’s going on in my life, and honestly, I’ve got a little bit of writer’s block.

Actually, that’s not accurate.  I have writer’s diarrhea, as gross as that sounds.  I have a very rambly, couple thousand words of thoughts but no coherence.  So, instead, I think I’ll just post up one of those “cop out week in the life” posts. 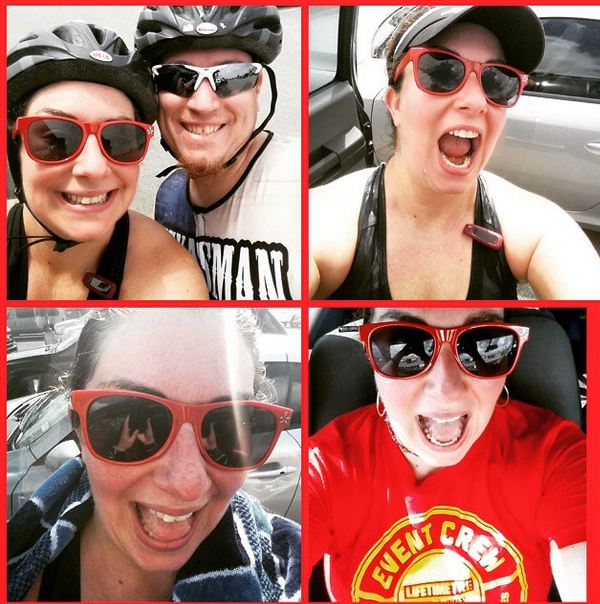 Did a practice olympic triathlon out at the lake.  Didn’t get going until almost 1.  These days are numbered, but I’m loving the lack of early alarms.  The swim kind of sucked (I was way underfueled), but after eating stuff, the bike was glorious (outdoor bikes and I usually do not get along that well, so I will take it) and the run started with a whimper and ended…well, maybe not with a bang, but pretty well though it was getting steamy.  I was happy with the effort on all 3.

Came home, changed into PJs and loaded up netflix… just as the neighbors sent a “want to go bowling?” text.  We rallied and ended up having to wait through a HAIL storm (which actually left hailstone on the ground all over, crazy considering it was in the 80s earlier), bowling two games, drinking beers, and then staying up hanging out until almost 4am, my late night consciousness care of a caffeinated gel put down on the run around 4pm. 😛 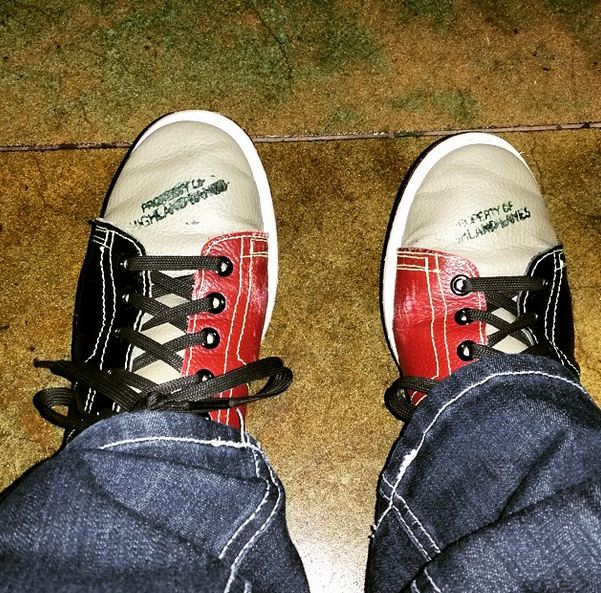 We had a lazy, late Sunday morning wakeup.  I cooked my protein powder waffles, sausage, and broccoli pancakes and we watched netflix for a bit.  Zliten went to sonic and got tater tots and when they asked if he wanted family size, he said, “yeah, whatever”.  Let me tell you, folks.  Family size tots are no joke – too much for even two people.  Not the healthiest lunch, but whatevs.

Mid-afternoon, Zliten went out to do some yardwork, so I got into my closet and drawers and spent two hours cleaning them out.  I’ve got just a little bit left to do this weekend and I can call that one space DONE!  I already have 3 giant garbage bags to sell/donate.  Win!  Then we ran errands, to REI for gels/nutrition, to the grocery store, and to Target for sunglasses and draino (and… all we walked out with is sunglasses and draino… we should get a medal).

Then, since I had groceries, I guess I had to cook. I made ranch dill potato salad (which sadly went bad because of some icky onions before I got to eat more of it), cauliflower steaks, roasted brussels, cauli-taters, and my homemade version of sirloin burger soup.  My husband kindly fired up the grill and cooked a billion chicken breasts, polish sausage, fish, and hamburgers and we were set for the week with soups, chicken salads, chicken/sausage w/caulitaters and veggies, and some veggie snax.

We ate amazingly well, and were set up for the week, but dang, it was kind of exhausting to be so adult and productive for so many hours on a Sunday.

We intentionally made this day pretty low key, especially when it was just busy busy busy at work.  We rode the trainer for an hour, sharing a bag of popcorn as ride fuel (chased it with an angelic chicken salad after though, balance in all things).  We kept it easy peasy, and Zliten actually hopped off early.  Recovery day is for recovery.  I followed it up with some core/arms and stretching.  It was one of those “work, ride, eat, sleep” days.  I was not up for much more.

This was work launch day!  Finally, the update that we’ve been working on for the last, oh, 6 months went out for release!  Oh happy day!

However, let’s not get ahead of things.  I woke up and kinda stumbled around a bit but found myself on the bike and I actually had some legs, so I went through my speed workout (almost – cut it a little short) as planned.  10 mins high cadence fast bike, 1 mile fast run x2.  The bikes set a PR for me.  The runs weren’t the fastest ever, but pretty solid at 8:32 and 8:20 off fast bikes.

After a quick cooldown, shower, and trip to work, I spent the day on the edge of my chair, waiting to see how everyone reacted to the update.  I’m pleased to say that there were no fires, and nothing was bad enough that we had to go through the fire drill of putting together an emergency patch.  That’s pretty rare and awesome, considering both our really high quality standards and how large this one was. 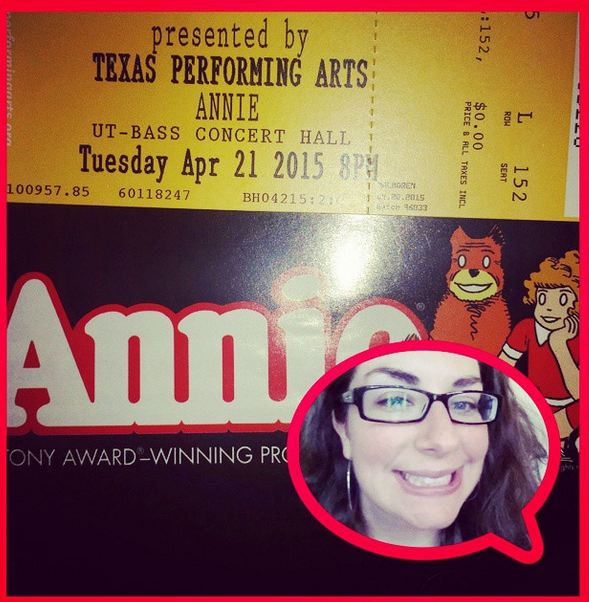 It was also incredibly convenient, because we were able to actually get out of work and make use of the free Yelp Elite tickets to see Annie.  First, we stopped at Naanful, since I’ve had a wicked Indian food craving.  I got my usual – Zliten and I split an appetizer of gobi manchurian (cauliflower dusted in rice flower, fried, and coated with this amazing sauce), and an appetizer of chicken tikka just for me.

Annie was spectacular!  The 12th row seats for free did not suck, the cast was just ON, the sets were awesome, and I just felt like a kid again.  Sometimes during shows, I’ll glance at my watch.  Not because I’m not enjoying, but me sitting in a (kind of uncomfortable) seat for 2.5 hours without moving… not normal to me.  For this one, it was like… “what, it’s over already”?

Though… getting home at 11pm on a “school night” definitely is not normal for me and I think I was snoring within 30 mins of the car pulling in the garage.

This was a weird week for me.  I’m usually WAY more than 2 hours into training by this point.  Sometimes I’m closer to 4-5 hours of training by the time I get to work on Wednesday.  Since it was a planned recovery week, I wasn’t stressing about it, but it seemed like a good day to put in some work.

I continued to be busy and stressed at work, and almost didn’t get out the door to swim, but Zliten dragged me.  I swam 5x300s.  It may not be a coincidence that I’m racing a triathlon next weekend (!!) with a 300m swim (so short and adorable/painful).

I took the first as a warmup, but I always swim warmup fast in the cold pool (5:31), the second and third focusing on form (arm turnover and long and lean strokes, (5:36, 5:35), the fourth at a little slower than race effort but pushing it a little more (5:25) and the last as cooldown (5:43).  I took a very short break in between each (15 secs or so). Keeping track of times is kind of new for me and fun. 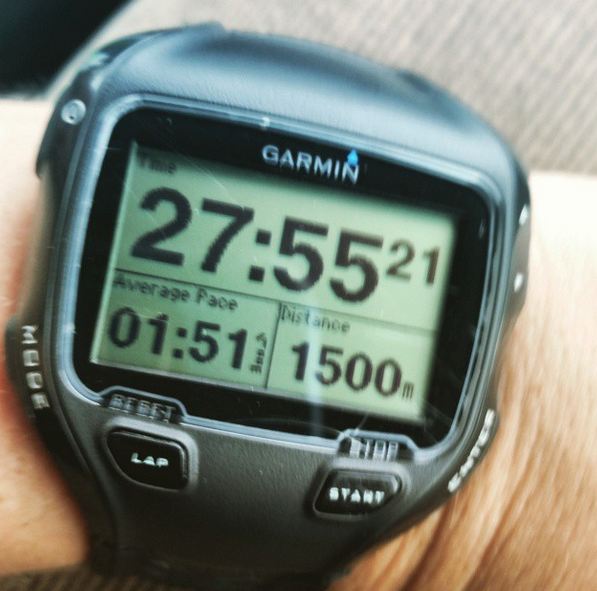 Better yet, the swim in the outdoor pool in the 70s and sunshine cured most of my ills.  I felt so, so much better after that swim.  The afternoon continued to be busy and I felt a little meh about my planned evening run, but I just went with it and shoveled myself out the door and actually had an incredibly pleasant run chasing the sunset.

First half was with Zliten a little slower, then the last half was ~1 min per mile faster (top of my easy pace instead of the bottom) and I cruised into the house at 6.4 miles in 1:11, as it had gotten too dark at exactly 8:17pm to see through my prescription sunglasses (and I’m blind without them).  I love love love sunset runs.  I’ll be so sad when it gets too hot to do this, and I have a feeling I’ll probably push it into slightly hotter temps than I’m really comfortable with to continue.

I stretched and coconut water’d on our patio.  I decided Amy’s black bean and veggie enchiladas sounded like the perfect dinner, I didn’t feel like meat after my run.  Sleeping in the next morning and the new bottle of Texas whiskey sounded better than a run in the morning, so I spent the evening having a few sips and playing Clash of Clans outside until rain sprinkles drove us inside.

Slept in until 9am and it was glorious.  Work had actually calmed down, but I was feeling kind of antsy.  I didn’t really move much from my office.  Weird day.

However, once it ended, we got Freebirds and headed to game night!  I stayed good on my entree with chicken salad with guacamole and black beans… but we got chips and queso to share with everyone and I had a lot of those.  It’s a tradition now that we all bring cheese to share, and wow… I overate.  I mean, in the grand scheme of things my calories for the day weren’t off the charts, but my stomach hurt because of it.  I think next time, I’m going to bring veggies and hopefully I won’t get kicked out of nerd nite for it. 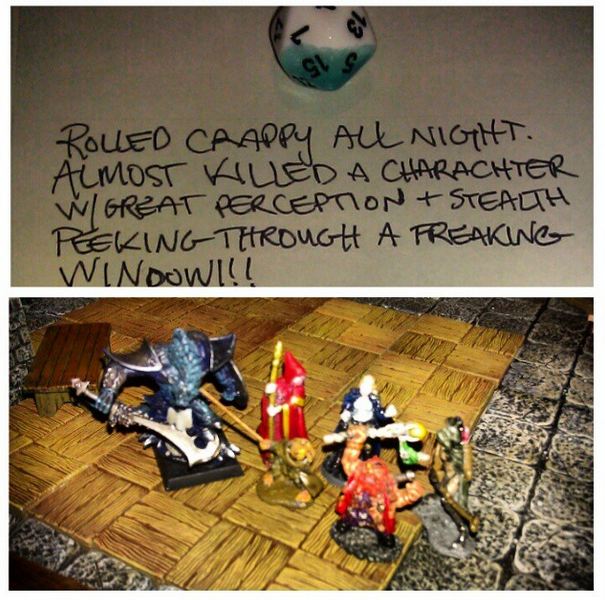 Being overcheesed didn’t get me down though, we laughed really hard all night.  We are all full of zingers and puns and it was the best.  I play a very weird caster hybrid who can do some particularly wicked damage with a crossbow and I may have stolen the show in terms of damage.  Usually my dice roll terribly, but I was ON!

I fell asleep with a quickness (it’s another “out until 11 on a schoolnight” day – rare I have two in a week), but woke up at 2am with stomach bleh.  I took something for it and grabbed an ice pack, and thankfully found sleep quickly again.

Today has been a pretty mellow day and I’m about to head out the door to make up for that run I decided to skip yesterday, hit up costco, have some dinner, and then pack up our Xterra so we can get out and ride and run tomorrow morning!

…maybe something more deep next week on race week.  Happy weekending, everyone!