Two swings, two misses.  For having such a great early season, I’m not liking this direction.  There were some redeeming qualities of the marathon, but to be honest, I think the most important thing is the realization that my physical and mental shape right now is at rock bottom.  And once you hit that point, you no longer ignore it and you drag the microscope out and examine things.

But, that’s another post coming soon.  Today, let’s focus on the spectacular personal worst marathon (or if you’d like to put a positive spin on it – personal time on feet record) out of nowhere I ran last Sunday going play by play. 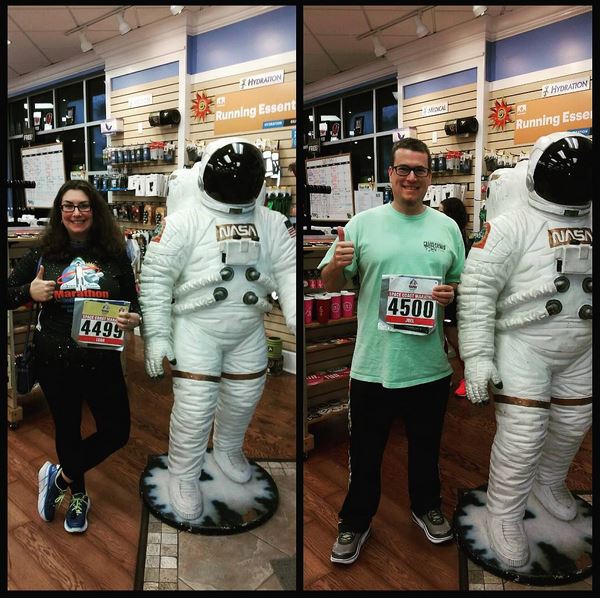 Then, our hotel ended up being right next to a bar that had live music until 10pm Friday and Saturday… and we may as well have had front row seats.  And the beds weren’t that great.  I managed to get probably 8 hours at least between tossing and turning on Friday night (about 12 hours in bed), but I was lucky if I got 3-4 the night of the race with a 3am wakeup call.

I was perfectly comfortable in my tank and capris by race start.  That’s not a good sign at all for the day to come.

And, weirdly enough, I never felt that hot after the first hour or two, but I could tell my system was being over-taxed when I felt out of breath running 10-11 minute miles (when I was running) on the second half of the course. 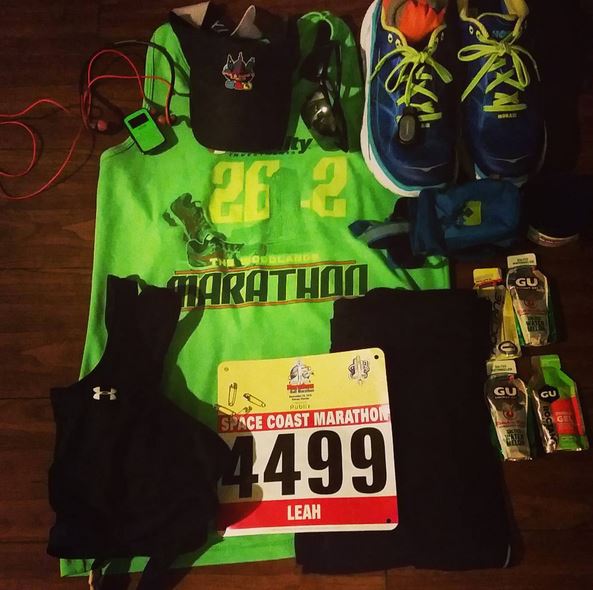 While I wanted to treat it like a training run, I should have been jazzed to do a supported long run with thousands of my closest friends.  No nervous energy, no “yay its m-day”, I was just like “ok, guess I’m going for a long run now”.

Race Issue #4 – Everything felt off at the get go.

Something felt not-right even at the easy 5 hour pace.  I’ve started races too fast, and I don’t think I did this time at all.  In fact, I started slower than I expected to want to run.  Did not help.  Nothing ever got better.  I tried to convince myself that I’ve run 20 miles feeling shitty before, but that only got me through about mile 12. 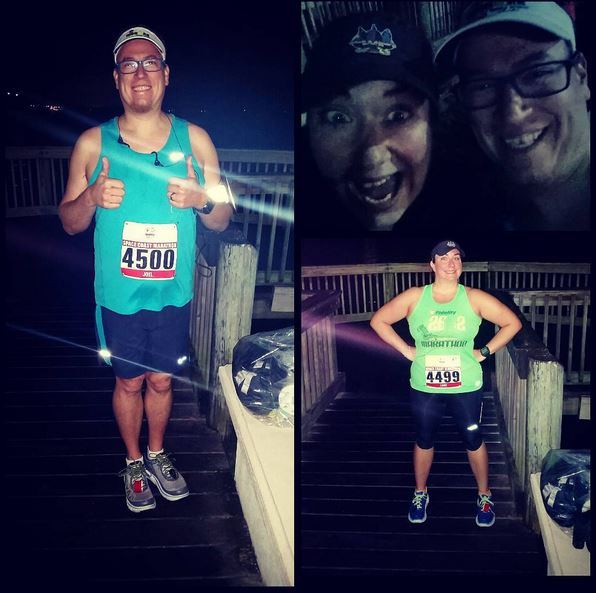 I knew I needed to use the restroom about mile 1, but not urgently.  I waited until mile 8-ish where I thought I could jump right in but there was still a little wait.  I was at 11:11s when I stopped, I was at 11:26s when I started again (which is below the pace I needed to be to break 5 hours).

During the race I had convinced myself I needed to go, but if I waited the urge may have gone away.  I think I may have subconsciously just wanted a break from running.

Race Issue #6 – Tried to catch back up with a 5 hour pacer or Zliten.

I made the call that I was going to pick up the pace to try and get back with someone.  I needed that motivation to keep going.  Those were probably my fastest miles of the day, and I think that if I would have taken it a little slower, it might have been better for me.  I don’t think it caused the crash bang boom, but going a little slower may have delayed the inevitable.

Race Issue #7 – Never caught back up.

Unfortunately, by that time, I was so mentally thrashed I broke.  I think there was some unintentionally strong gatorade that made me queasy that didn’t help, but it was more than that.  I just let it slip away and in the next 3 miles, the 5:15 and 5:30 pacers just blew by me.  I didn’t care.  That evoked nothing but a “whatever” response from me.  I was done.

Race TRIUMPH #1 -Not giving up

Knew I had 0 chances at a PR, but I didn’t take the exit at 13.1 (which would have gotten me a finish and a medal and credit for the series).  I knew I had some more lessons to learn that day so while I constantly regretted it on the course, I made the turn away and kept going (for like, over 3 more hours of torture). 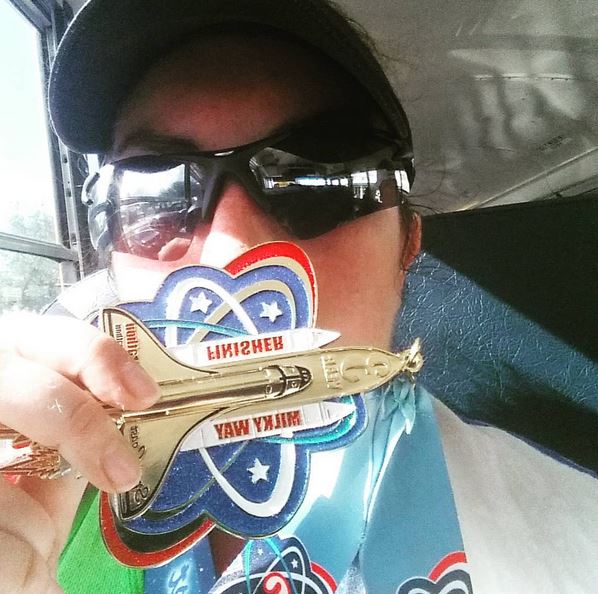 After a few miles of pity party, I decided that I wasn’t going to let myself just walk the last half.  Even though I was having a rough day, I was able to keep myself roughly to a schedule of run 2 songs, walk 1 on the second half and promised myself the 5:45 pacer wouldn’t get me.

Sometimes an aid station would come up right after I’d start running or I was like OMG I CAN’T run yet and do 2 and 2, but I found that walking was still pain.  Running was just different pain.  I just ran until I was gaspy and then walked and stretched.

I think I figured this one out around mile 24 – I was feeling so rough and dejected that my form had degraded and I was slumped over for about 12 miles.  I kept better posture the last 2 miles and felt a little less rough.  Before that, though, it was so bad I kept pulling over to try to work it out each walk break and once I just sat on a bench and stretched.  During a race.  Yeah.

Race Issue #9, and the mack daddy of them all – My head and heart just never showed up

You can’t run the back half of a marathon without a brain or your drive.  I know that a lot of things went wrong that day.  However, this is two races in a row where my mojo has just abandoned me, and I have to look to my life and see what I can do to fix that.  I had my shit together earlier this year and now I’ve just fallen apart all over the place twice in a row.

On the other side was definitely not a pity party.  The minute I finished I got my medals and shoved pizza in my mouth to get some calories in so I didn’t collapse and die, and then we went and drank beer at the beach and then ate tacos in bed and had a lovely rest of the vacation.

The upshot with THIS race is that I think we’re going to do the half next year.  This is not a good time of year for me to really rock a marathon.  I always have a big work deadline right before this and that’s not going to change.  The weather is never going to be my perfect day, it’s always going to be hot and humid.  It never fits well into my training year, it’s always a big rush to get up to marathon distance.  I think I’ll take the pressure off next year – starting at 6, being done close to 8am… and then getting on with my vacation!

I’m super glad I had considered this a training run, and not an important race, and I’m just slightly more disappointed than if I went out and just BOMBED one of my 20 milers. 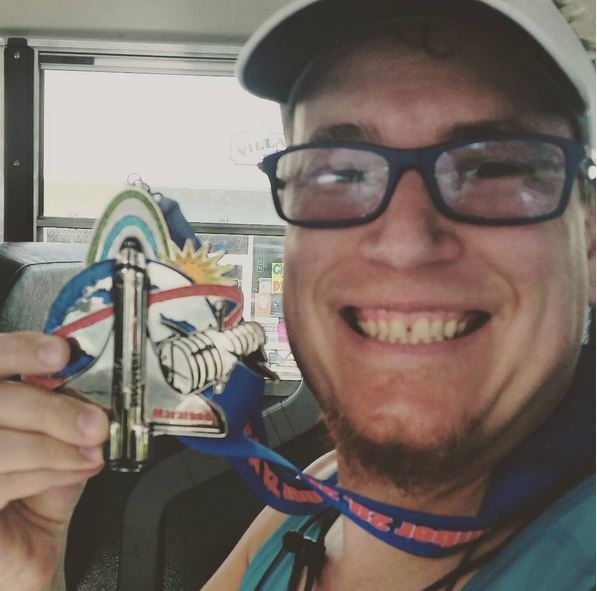 I’m super glad  I never caught back up with Zliten (for his sake).  I probably would have whined him to death.  He went on to do a 5+ minute personal best and had a tough but great day.

I’m also super glad I didn’t try to push any harder than I did if I wasn’t going to really go for it.  Going along with the person worst time is probably a personal best for feeling good after the race.  I was a little hobble-y the day of, but really no more so than after a long training run.  We walked a few miles the day after and my legs were still sore but it felt good.  By today, I feel like I could be back out resuming easy runs and maybe a double digit slow run this weekend.

However, my mind falling apart on me is the thing I’m more concerned about, and it is absolutely positively not ready to get back out there yet.  I’m not sure how long this will be.  A week? Two weeks?  But… I know I need to get to the point where I feel like I’m itching to run again.  Not where I just feel like I can or I should.

Now that I’m on the other side of #marathonmetabolism and #eatinglikeatenyearold and transitioning from the race and vacation back to normal life, I’m ready to work on some of the things that I believe are deeper issues that may have influenced my body to revolt and brain to flee on race days.  Stay tuned for that one.