While the impetus to go to Cocoa Beach was the marathon, this time we decided to just wrap a chill beach vacation around it instead of immediately taking off to do something epic. 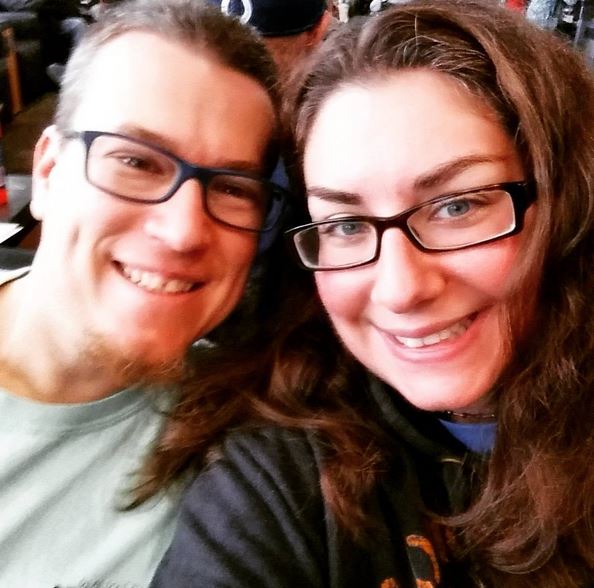 It was exactly what we needed.

Friday, our travel day was pretty uneventful.  No near misses of flights, no luggage drama – although aparently sun butter is not considered food, but PASTE, which means it can’t fly.  Thank you TSA for saving the plane from the terror of my sun butter.  LOL.

Upon landing and getting our rental car, the next order of business was a publix sandwich.  We are addicted.  So good. 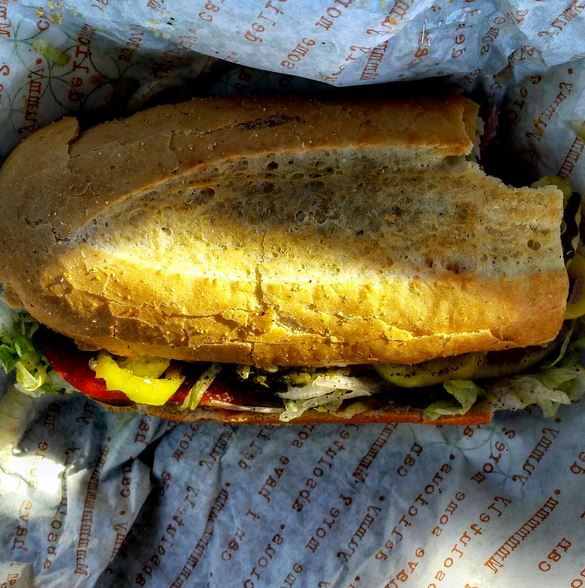 Then, we picked up our packets and got some running goodies (gels, socks, etc).  I like the shirts this year!  And, a ladies medium fit me pretty well, even feeling fluffy as I do right now. Score.

The night before the night before, the name of the game is lots of good calories.  So, we hit up Ruby Tuesdays and I had a mess of salad bar, rice pilaf, and blackened fish.  Noms. 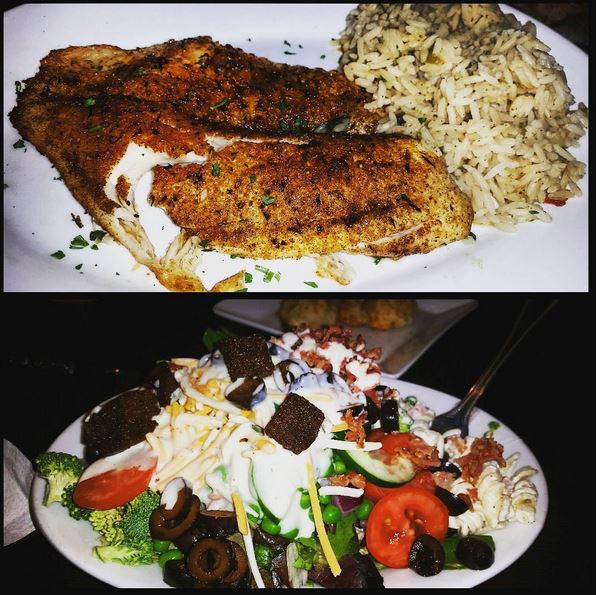 We saw a good luck froggy on the car after we left dinner.  I liked him. 🙂 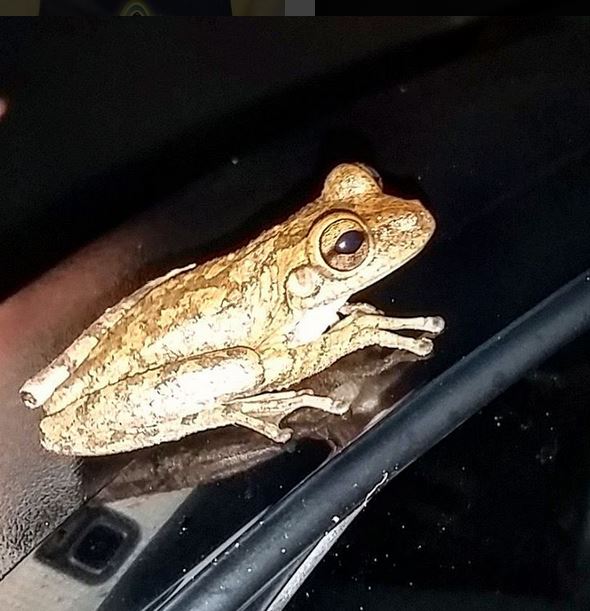 Our next intention was to just slink into bed and chill out and sleep early… but the bar next door had a band and it was LOUD.  So, we enjoyed that from our room and read and watched TV until about 11pm.

Saturday, I set no alarm and between the noise and the bed being kinda springy and me being tossy and turny, I woke up around 9:30.  We had a quick shakeout run – 1.5 miles – it was nice to get it out of the way early.  Usually I agonize over “should I shouldn’t I, and when” with those and skip them.  In our sweaties, we then got some hotel breakfast buffet stuff, splitting a waffle, half a bagel, some bacon, juice, etc. 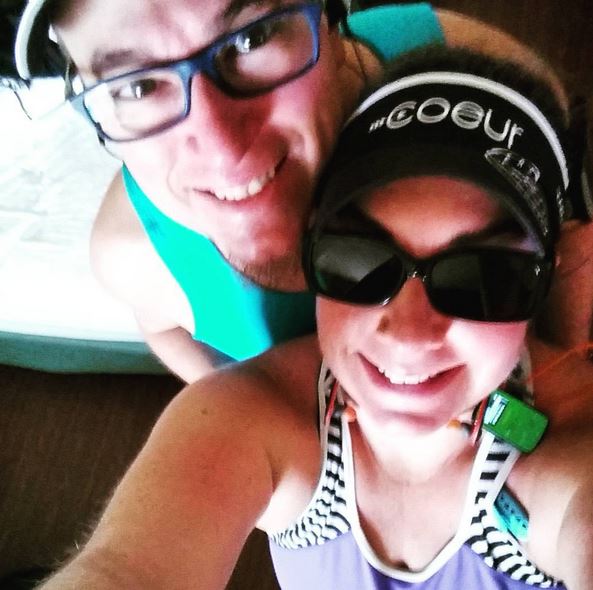 We bathing suited up, and stuck our feet in the ocean for about 10 minutes, and then read and went for a swim in the pool.  The water was so warm, the temps were perfect… it was nice. 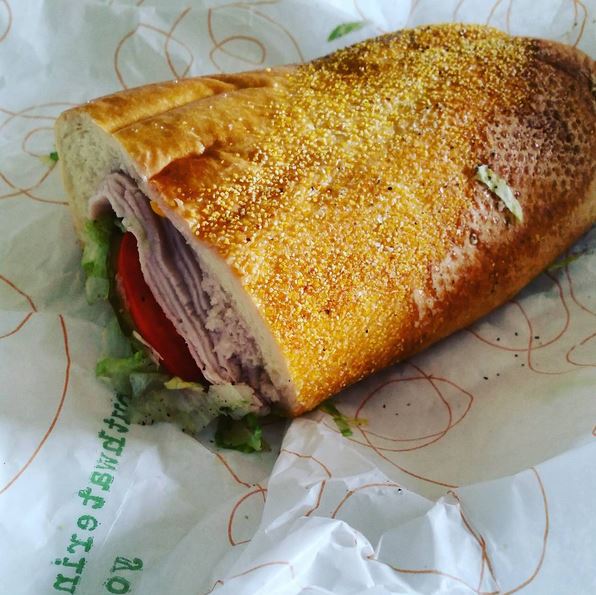 Another publix sandwich for lunch was nommed (no oil on this one) because… carbs.  Then, as per tradition, we went to the movies to see something to take our mind off of the morning.  The conclusion of the Hunger Games was pretty great, I can’t wait to just own them all and marathon (badup CHING!) watch them. 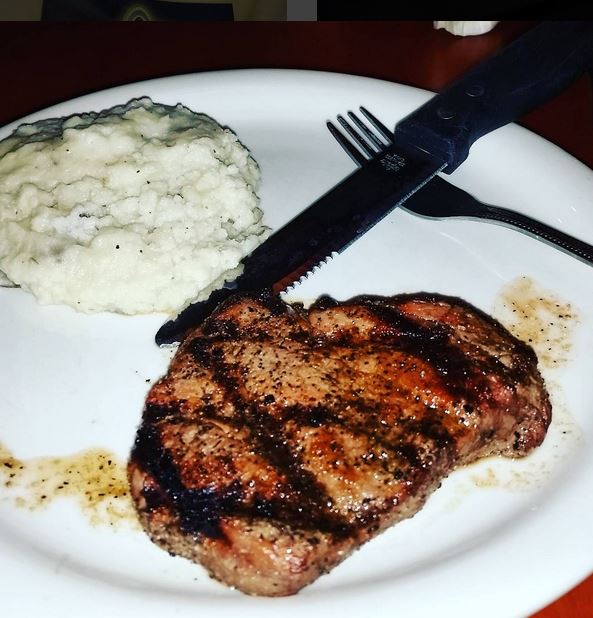 I had been craving a steak like mad, so for our last supper, we went to Backwoods Steak House again which was right next to our hotel, and got a salad, filet, and mashed potatoes.  The salad was great, the steak was overcooked (which I don’t mind – but it was DEFINITELY closer to well done than the medium I asked for) and our mashed potatoes tasted… funny.  We didn’t want to take a chance with the marathon the next day, so told the waiter and got baked potatoes instead and they were great.  The place was great last year, think they just had an off night, I guess. 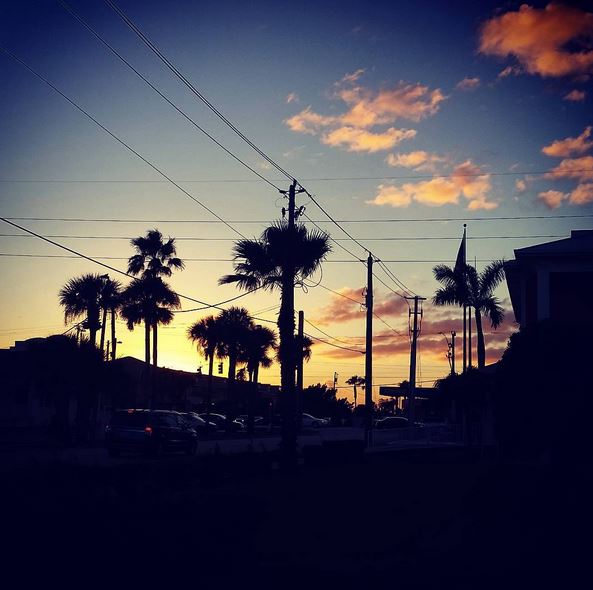 Then, we settled into bed.  Just in time for the band to start playing next door.  I tried to sleep around 8:30 but no go.  It was a late night, and I kept counting the hours until my 3 am alarm.

Sunday, we woke up and did all the normal things like eating cereal with blueberries and coconut milk and Zliten was antsy to get to the shuttles 2 hours early so we did that.

I covered the race here, so I’ll skip that, but once we got the shuttle back to the car, we went back to the room, cracked open some beers and snacks while we took some painful showers and hobbled around and got cleaned up.  After becoming presentable-ish, we hit the bar next door and the band had just started.  It was time to enjoy it, damn it! 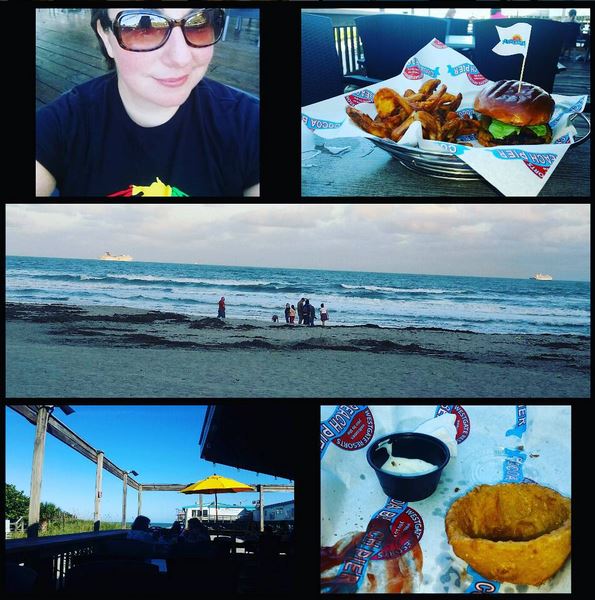 We drank coronas and I internet stalked people doing Ironman Cozumel and ate onion rings and I got a buffalo fried shrimp salad and Zliten got an amaze-balls burger and fries.  Our server was into free diving so we tried to talk him into getting his scuba liscence and enjoyed our afternoon.

After a while, we retired to the room and got kind of crashy.  I realized I needed more food BAD so we went out and grabbed some tacos from Rock the Guac.  They were pretty good, not great, but totally adequate, but from a place with that name you don’t expect the guac to cost extra, right?  WRONG.  Crazy. 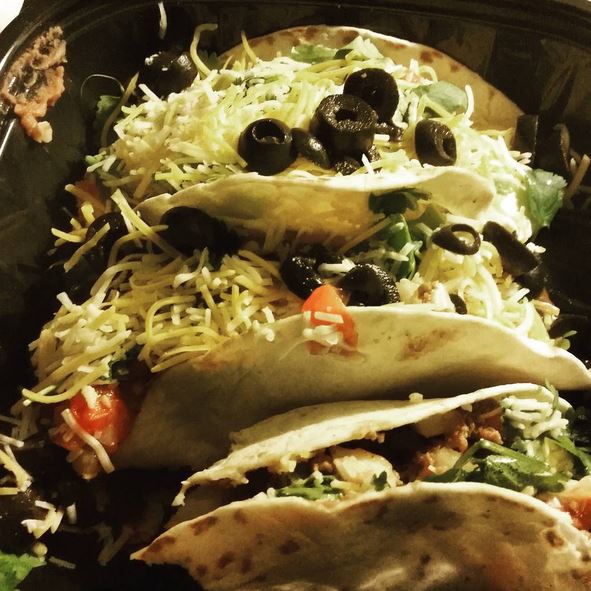 I ate one and saved the rest for breakfast and passed out for 11 hours.  No band late on Sundays.  Righteous.

Monday, we woke up starving and immediately housed those tacos.  We puttered around and went to the pool for a bit and read and swam (Zliten went to the ocean, I skipped it because I felt unstable) and enjoyed our morning, but then it was time for some more food.  Because…. #marathonmetabolism.

We went to a highly Yelp – rated Italian restaurant called Marinas, and it was so the right choice.  The house salad was GREAT, the bread was crusty and delicious, and the lasagna was some of the best I had ever had, and it was nice to have a reasonable portion – about the size of my fist, unlike many places that give you a piece the size of your foot.  The cannoli was pretty spectacular as well. 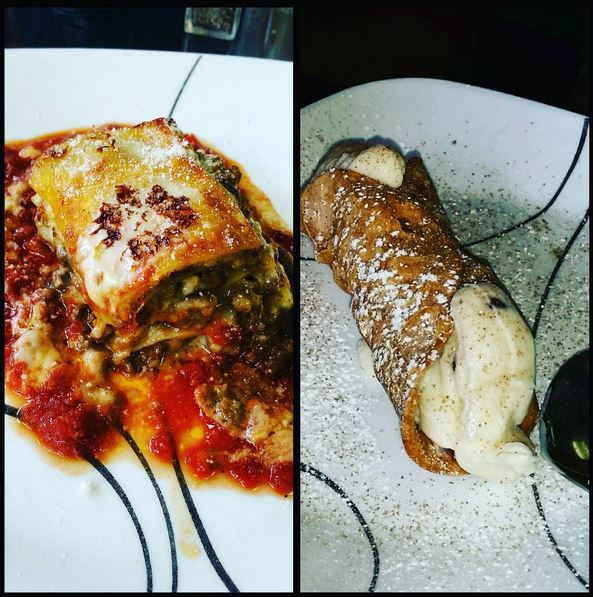 The afternoon was for a few errands, and then getting back into suits and hanging at the pool to read and have a very quick swim (we decided we weren’t into it, it was too overcast and chilly), and then got ready and walked a mile to stretch out our legs, and so we could meet one of Zliten’s college friends for dinner.

It’s always nice to meet someone new that’s awesome.  I think we clicked well or at least they put up with me well, I was a little off my brain game less than 36 hours out of finishing a marathon, heh.  After a very delicious but tiny turkey melt and two glasses of wine, and a lot of conversation, we bid them adieu and headed out to check out a bar on the way home called the Sandbar Sports bar. 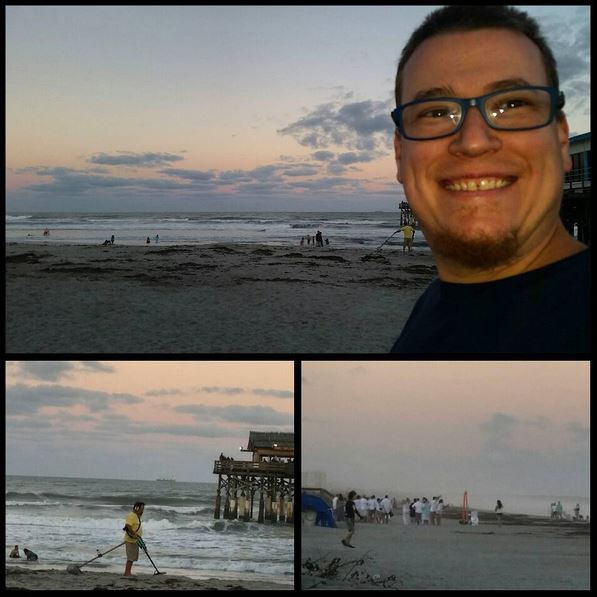 We got another snack – split some fish tacos that were to die for… so good, and a dollar margarita (which tasted about like you would expect).  After that, I switched to drinking whiskey on the rocks because… it sounded good.  Each glass ended up getting a little fuller when she served them, and there were some shots in there too.

We ended up meeting a cast of very interesting characters.  Some folks visiting from Michigan – a retired teacher and her husband (didn’t catch what he did) who got divorced and remarried.  Some locals that either worked at this bar or another in the area with crazy bar stories.  An older gent who lived in the area and had some interesting stories.  A very cheery, very drunk girl that we *think* was a prostitute.  A fun bartender – she loved to hunt deer, she was going to grad school, and was complaining about being asked when she was having kids one month after getting married.  I know that one, sister.

We decided that a cab was the safest bet with marathon tired legs (Zliten is paranoid of falling down after his bear fighting incident) and the cab driver didn’t even turn on the meter and we just tipped him.  Awesome night. 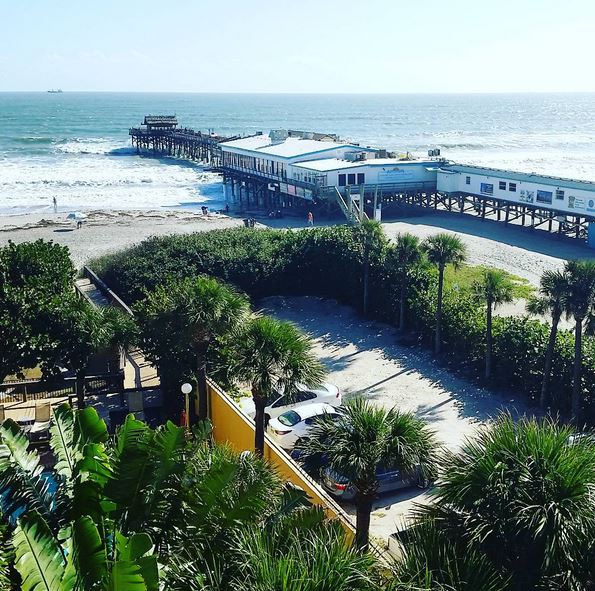 Tuesday we woke up feeling a little rough and had a few bites off the hotel breakfast but we weren’t really into it.  We swimsuited up one last time and hit the ocean for a bit, and then the pool.  Usually, that’s a pretty good hangover cure trick for me, but it wasn’t cutting it.  We tried to take a quick nap but the hotel maids thought we were out of the room and interrupted, so instead we just packed up and got going.

My stomach wanted little kid food, so we hit Beef O’Bradys.  Huge menu of incredibly mediocre fare.  We got fried pickles to start with, and I got half a grilled cheese and a side salad with ranch.  The server was VERY nice and brought me a tiny side of tomato soup to go with it.  I felt much better after, and we tried to find something to kill a little time before our flight. 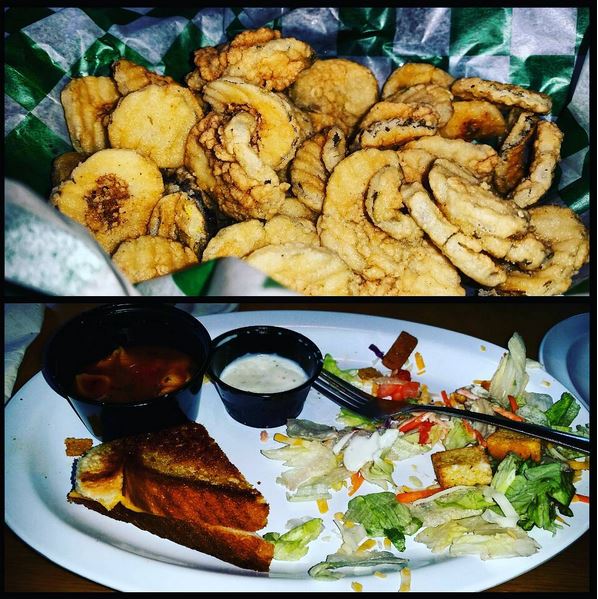 We hit up the Dinosaur store and museum… which ended up being a store that is BUILDING a museum that’s not ready yet.  Some really cool fossils and geodes and an amazing toy store.  We wandered for a bit, and then decided we would just get going towards Orlando and the airport. 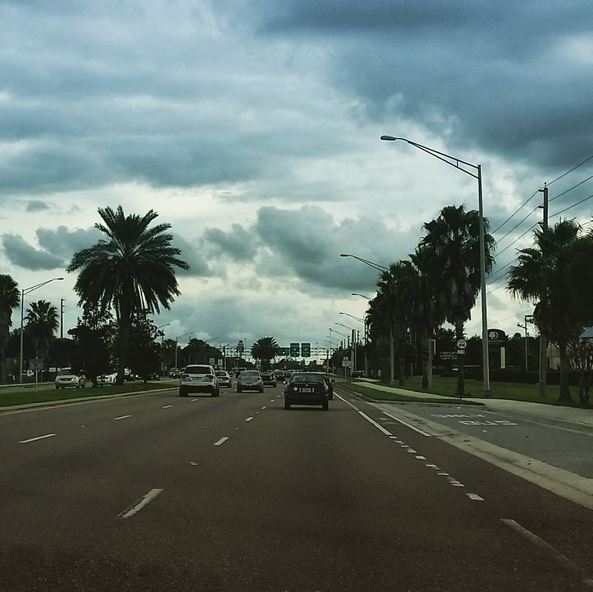 The last stop was to pick up a last Publix sub for the plane and to get some coconut patty things that are only in Florida for my team at work.  First one was accomplished, second was a bust.  Couldn’t find them anywhere.

Luckily, found them in the airport!  Whew.  My AP would have been sad, he loves them.  We got through all the lines quickly, though I forgot to check in and was rocking the Southwest “C45 and C46” positions in line (aka – you lose, sucker!).  However, it was a Christmas miracle and we ended up with two seats together and bump bump bumped our way home through turbulence.

Our flight got in a little early, so we were able to pick up the leezards, grab some takeout chinese, and collapse into our couch and then shortly after, our amazing and wonderful bed.