The week after the Ironman was not quite what I expected. 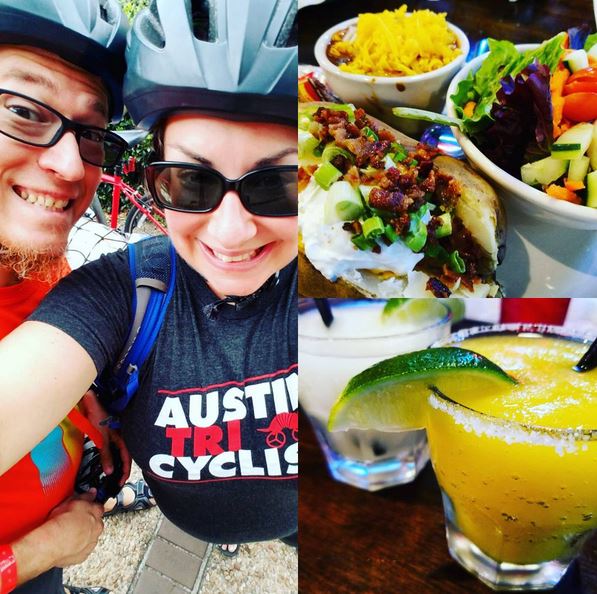 I expected to be more tired and sore.  Not to say that I wasn’t, but it was maybe like third-or-fourth-worst-sore-marathon level and not get-me-a-wheelchair level.  Steps were hard for about 2 days, but that was it.  I was more mentally out of it… the day after, I spent 4 hours sitting by the pool kind of staring off into space, not reading, talking much, or anything, just sort of existing.  The extreme tireds caught up pretty quick once the caffiene in the coca cola, the race excitement, and the booze benders wore off.  I have spent quite a few 12 hour+ nights in bed with reading and sleeping combined.

I expected to spend the week sort of in a happy, post-IM bubble.  The day we got back, we had to say goodbye to our little old man schneider skink Lump.  It wasn’t a surprise because he’s not been doing so well, but he went way downhill while we were gone and it was time.  That, plus a bunch of other shitty shit happened last week and I felt like I needed a do-over.  However, the weekend combined leisurely lunches out, getting a few things done that were nagging at me (but not too many things so it didn’t feel like a hassle), and a whole lot of vegging on the couch binge watching Netflix.  We finally drank our post-race champagne on Sunday and I wore my damn medal and screamed YOU ARE AN IRONMAN a lot.  I felt redeemed.

I expected to be a LOT hungrier.  I definitely didn’t limit my portions and may have wanted a full ‘nother meal after my reasonably sized lunch two days after, but I felt less compelled to eat like an asshole because Ironman training actually let me kinda eat that way already.  I actually had vegetables and fruits last week in decent quantities.  By three days out, I split a burger between two meals because it was too much food.  I know when I nail my nutrition in training I’m way less hungry afterward, so this is perhaps confirmation I did just that at the race. 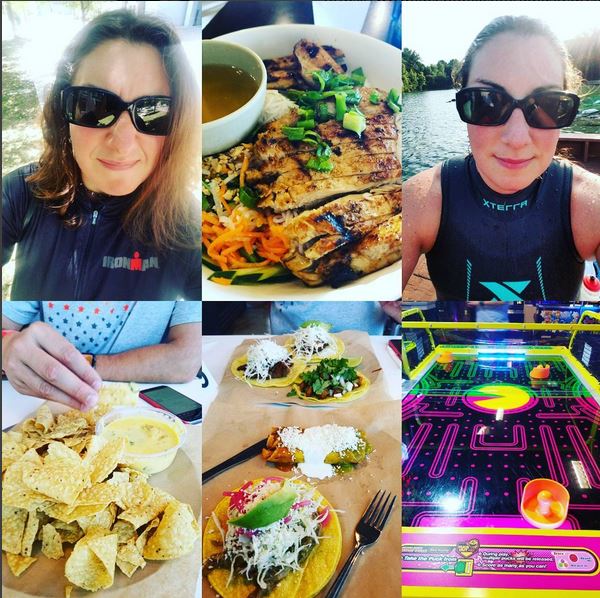 Plenty of foods but I wore my wetsuit and my bike helmet as well.

I expected to want weeks away from my goggles, my bike, and my running shoes.  We rode bikes with the group on Wednesday and it felt good, but 18 miles was PLENTY.  We swam with the tri team in the lake on Friday, but once around the quarry (750m) was enough.  25 minutes on the cruiser to lunch and groceries on Saturday in the heat and the wind tuckered me out.  The will is there, but the body is definitely saying that short bouts a couple times a week are the way to go.

I expected my knee to hurt more.  It’s not been completely pain free, but since the day after, it’s hurt less than any point 2 weeks before the race.  I have no idea what brought it on, like AT ALL, and I have no idea why doing an Ironman made it feel BETTER, but I’m still giving it enough space (read: no running or heavy lifting until after vacation) to repair itself.

I expected some weird body stuff, but not quite what I’ve experienced.  I still feel like a bag of water, literally almost sloshy, STILL a week and a half later.  The inflammation is real with this one, and this week I’m going to take steps to actually try and FIX it instead of probably aggravating it more with junk food and drinking beer and whiskey like water (and forgetting to actually drink water).  I’m hoping its working it’s way out because I have to pee like ALLLLL the time and it’s getting old.  Also – doing an Ironman makes you hair grow.  Literally.  I had an INSANE amount of stubble on my legs the day after, like a week’s worth, and it had been 2.5 days.  Weirdest thing ever. 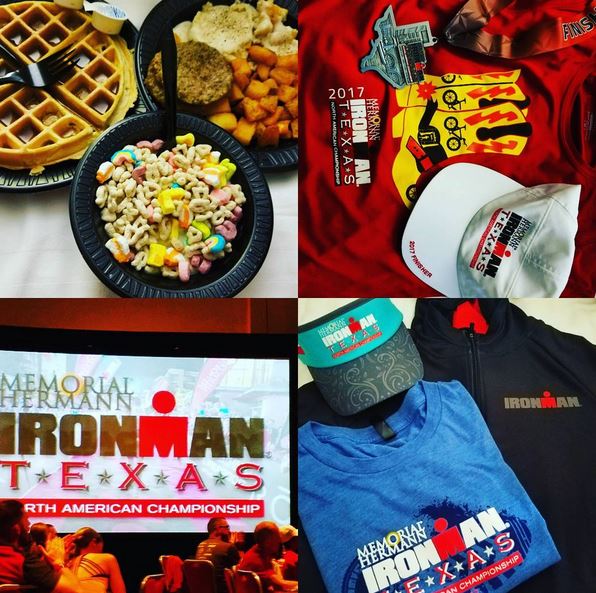 I might have bought all the merch like I’d never be back but… hurrrr…. I  *really* want to do another one after I get some of my life shit together…

I expected to be more one-and-done, or at least not wanting to do another one of these for a long time, but then again, I haven’t at any other race distance so I’m not sure why.  I really do feel a draw to do this one again.  That finish line is addictive.  Not next year because I have other priorities, but maybe 2019?  2020?  Definite possibilities.

I expected to have a little more oomph to get stuff done last week, but I always expect that and it never happens.  I was lucky to just do a basic level of adulting.  I might be an advanced beginner adult this week.  I’m adjusting my expectations here and I’ll work on getting to the intermediate/advanced level (read: the big to do list with appointments and house stuff and other projects, oh my) once I’m back from vacation.

So, it’s been about a week and a half.  I am definitely feeling a little of the post Ironman blues because I had absolutely zero things scheduled starting April 23rd.  This was totally intentional for a lot of reasons, but I expected to welcome the break a little more than I actually am right now.  It is completely unreasonable, but I kind of wish I was ready to jump on the swim/bike/run train.  The Ironman marketing team are evil geniuses because today I got an email telling me to NOT let my training die and sign up for IM Boulder this summer.  Argh, yes, that sounds great!!!

But no.  I need to face some other things.  As weird as it sounds, it sounds WAYYY more comfortable right now to jump right back into 12-15 hour weeks and ignoring the rest of my life.  Hopefully, that will pass soon as I remember what it’s like to have my identity not tied to Ironman for a while. As I get over the hump of “I’ve eaten healthy and counted calories for 24 hours, why have I not lost 15 lbs yet?”.  As I remember that it’s actually pretty awesome to just be a person who is active for the fun of it (and maybe sometimes to earn a little extra food) and not just because it’s on the training plan.

So, week one was really just surviving + a small amount of activity.  How about week two? 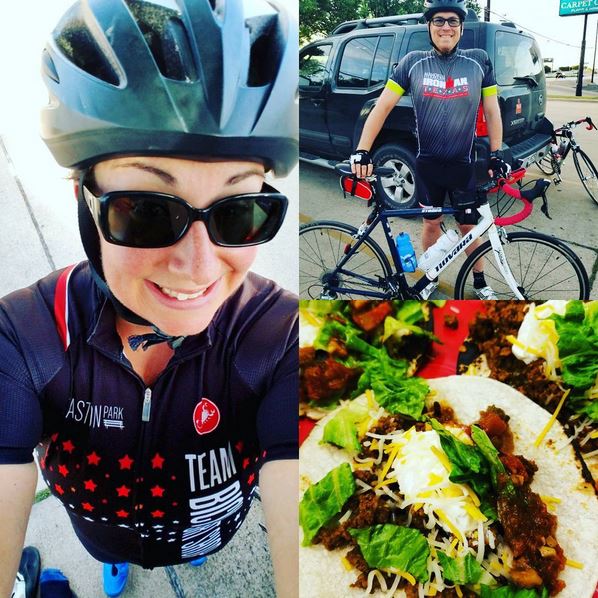 I’m back to tracking food and weighing myself.  No specific calorie goal this week, just get back in the habit and try to keep it reasonable for my activity level. To be honest, I logged my weight the last three mornings without my glasses on so  I couldn’t see it, but I ended up checking it out today and it’s not *quite* as bad as it could be (189.8 which is about 3lbs up but also 5% more bodyfat/bloat than a month ago).  It’s time to shift my eating to mostly fruit and veggies and lean proteins and some grains and eschew the things that have fake orange coloring and come in a plastic tub or crinkly bag.

Water, water, water.  I know this will help with feeling like a water weenie, it’s just haaaaaaard when I don’t really focus on it.  My goal is to have four 24-oz Polar bottles independent of anything I drink while/directly after exercise.  So far this week I’ve done pretty well.

Still on the “whatever, whenever” plan but I’d like to do some of these things:

In terms of goals and to dos, I’d like to do a little bit more than surviving I did last week:

Since I’m still operating at the advanced beginner level of adulting, however, I’ll cut myself some slack if I don’t get to everything.