Six days of food in the woods….

With all other time constraints removed, we both love cooking. 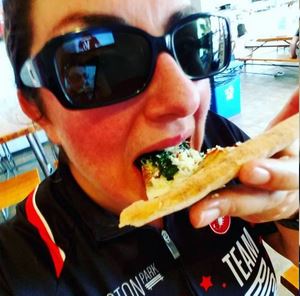 Not as much as eating, but it’s up there.

So, while I’m sure some people would find vacation where you prepare every meal sort of tedious, we rather enjoyed it.  The only frustrations were the meals that didn’t come out quite right or quick enough, but Zliten loves to grill and I like making sides, so it was never like UGH I HAVE TO COOK AGAIN.  There were some challenges, but it was fun to try things that you normally wouldn’t think to eat in the woods.

Our setup was pretty great.  We had a sink with running water, and a cutting board that fit nicely over the sink (so you could use one or the other but not both at the same time).  We had a gas grill and a stove with two burners.  We had the potential to purchase wood to build a fire, but we never did.  We also had a microwave in the camper (from the previous owner), but we tried not to use that.

We brought about 7 bags of food total, which seemed like an INSANE amount while packing up.  We didn’t use all of it, but we did a pretty darn good job.  While I completely overpacked on the clothing aspect, I only slightly overpacked for food.  I might be a little less obnoxious about it here next time knowing there’s a convenience store a mile away, but for fresh produce it would have been a drive.  Anyhoo, the goal was to exist the whole time on the food we brought, and besides a beer run mid-week (camping = less booze, more beer), we did it. 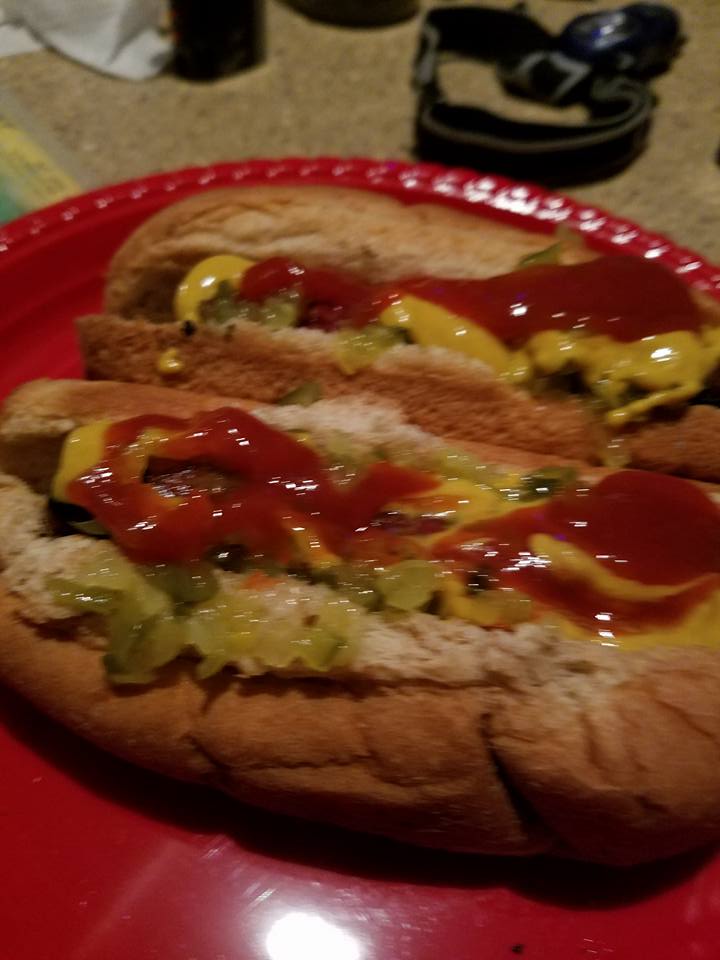 Meal #1 – Hot dogs.  Because it’s camping and you have to.  We cooked these on the gas grill the day we got there, and it was so late and we were so tired from work and packing and setting up that I think we just ate them with a side of beer (and were obviously too tired to get a good picture).  The specific dogs aren’t my favorite (the applegate NATURAL not organic like I usually get) but everything tastes better while camping. 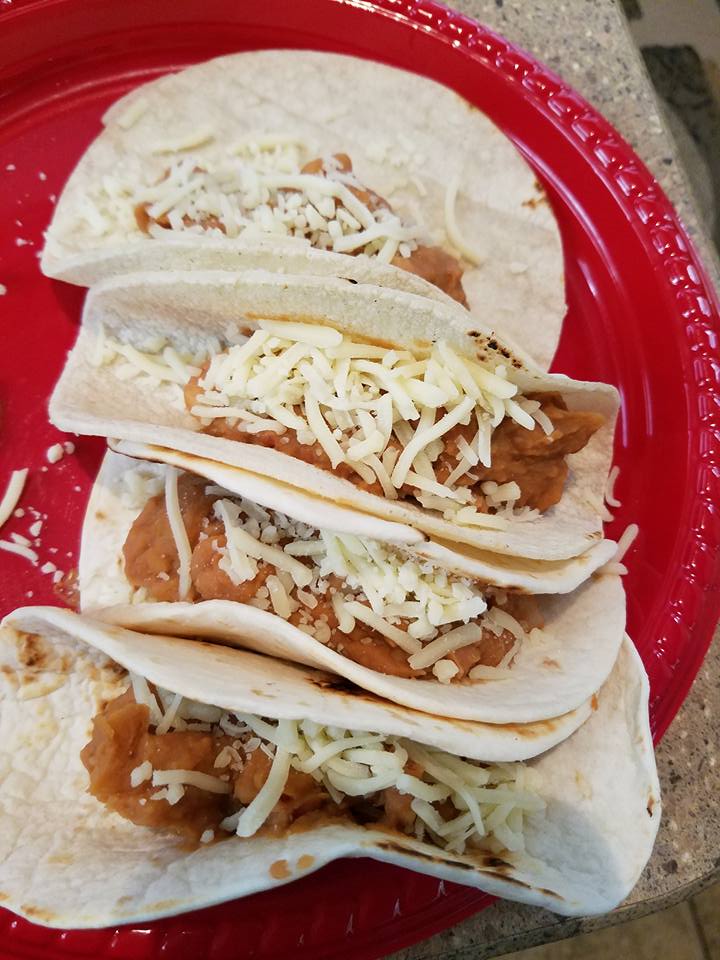 Meal #2 – Bean and cheese breakfast tacos.  We took a can of beans and reheated it in a pot while toasting the tortillas on the stove.  We caved the next day and heated it in the microwave, rather than have to clean the pot again.  We ate these for breakfast on day 2 and 3, and then I think we ended up sleeping so late or had food left over that we didn’t dig into the second can of beans or eat protein bars until the last day. 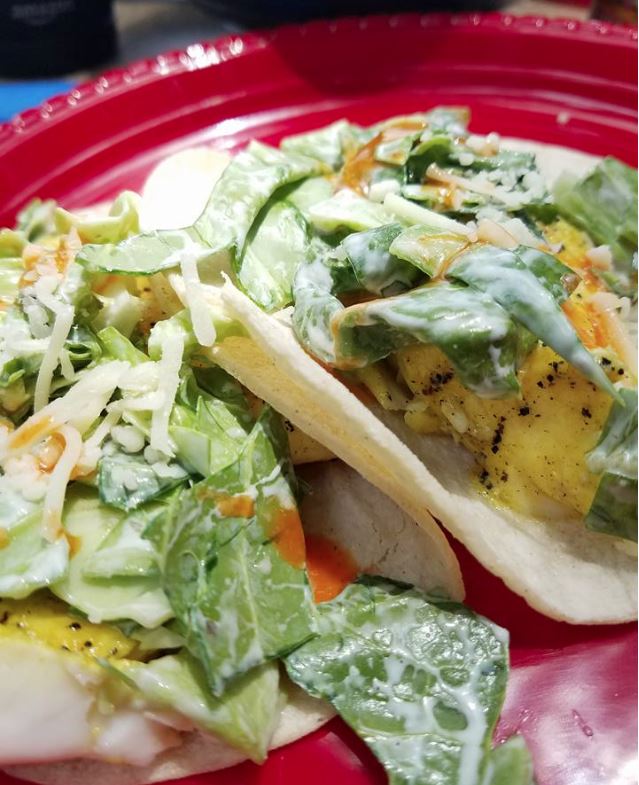 Meal #3 – Fish tacos with coleslaw.  We made tilapia tacos twice, the first time with lemon pepper, and the second time with cajun seasoning (both with avocado oil and vinegar).  Fish was cooked PERFECTLY both times by our master griller on the gas grill and I prepared some fresh coleslaw and topped it with a sprinkle of cheese and hot sauce. 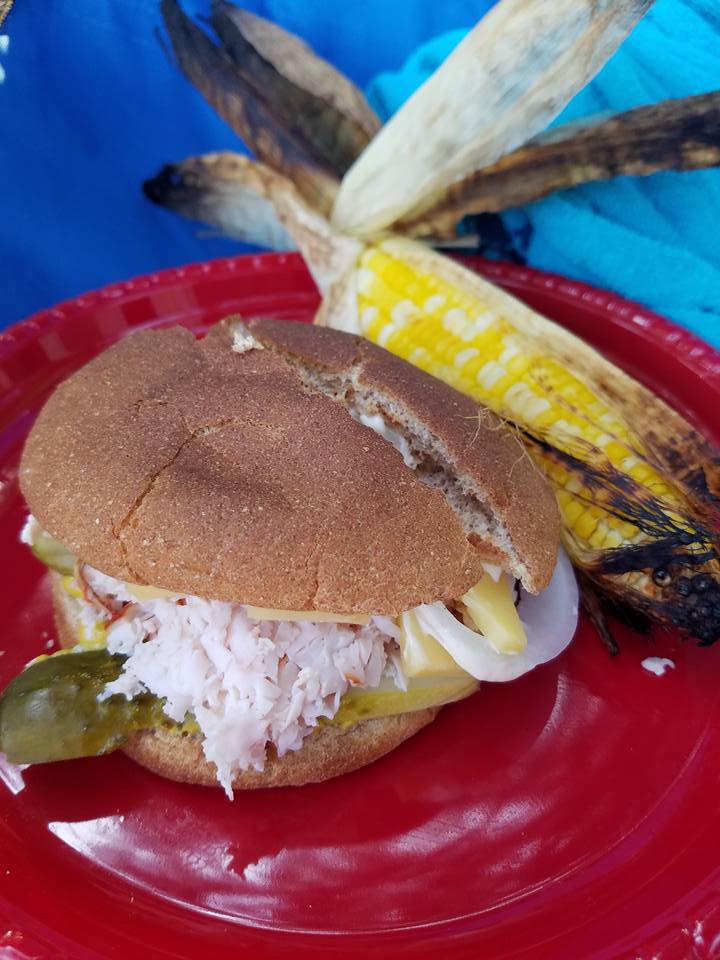 Meal #4 – Turkey sandwiches.  This isn’t super revolutionary, but instead of pre-made, I brought all the produce and cut it up from scratch.  It was kind of nice to have a non-grilling quick meal, but it was also sad not to have grill meat and it was a ticking time bomb because fresh deli meat goes bad quickly. 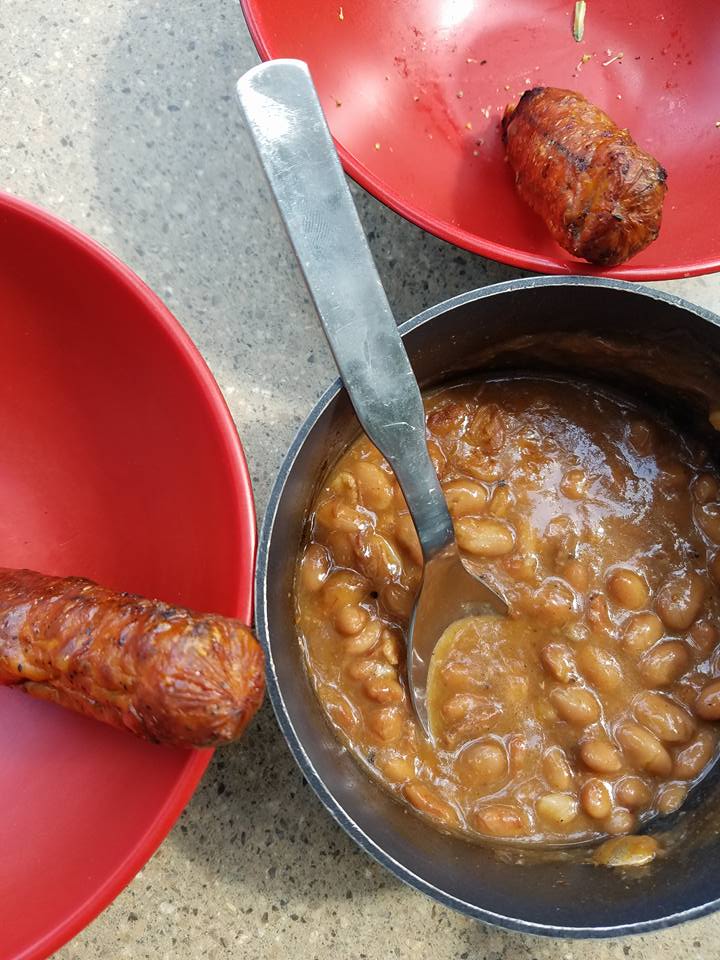 Meal #5 – Sausages and bbq beans.  This was kind of a mid-day snack meal after a big breakfast and a veggie snack, before a big dinner.  The beans were cooked on the stove and then we cooked the sausages on the gas grill (and the beans were cold by the time we ate).  We couldn’t figure out what to eat with these particular sausages, but our garlic mustard seemed to fit the bill. 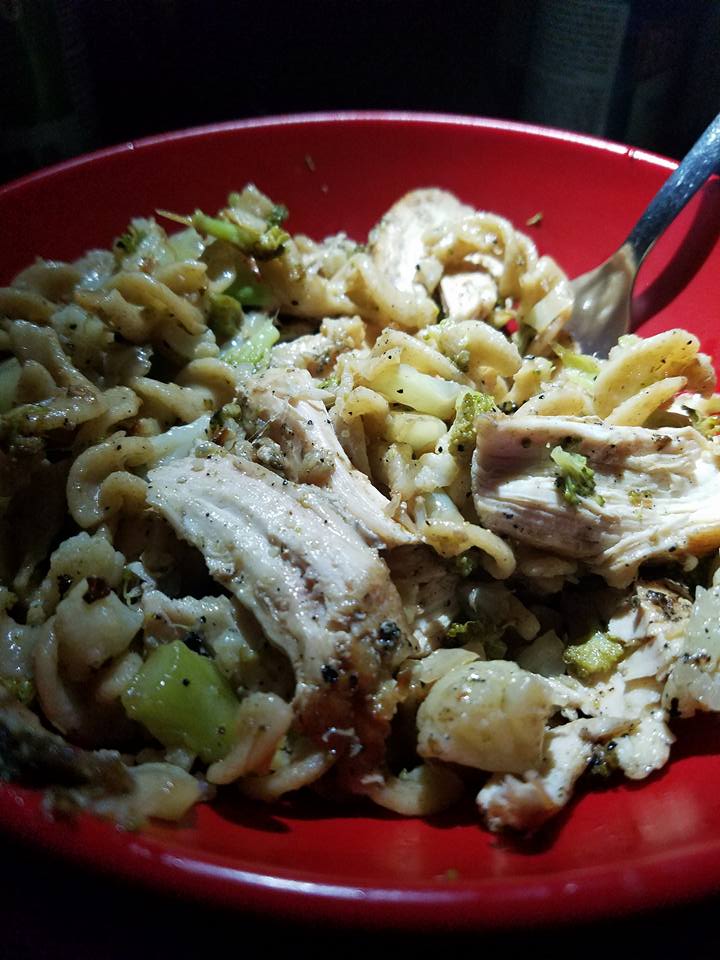 Meal #6 – Dutch oven chicken and pasta with broccoli and cauliflower.  This was an impromptu thing when I realized that we had chicken, leftover pasta, fresh leftover veggies, cheese, avocado oil, fresh garlic, and seasonings.  We actually had the neighbors cook the chicken on their smoker grill egg thing (of love and wonder), and then boiled up some pasta, and tossed some oil, garlic, and fresh veggies in the dutch oven.  Combine with cheese, salt and pepper and it was worth the time even if I may have been extremely HANGRY waiting for it. 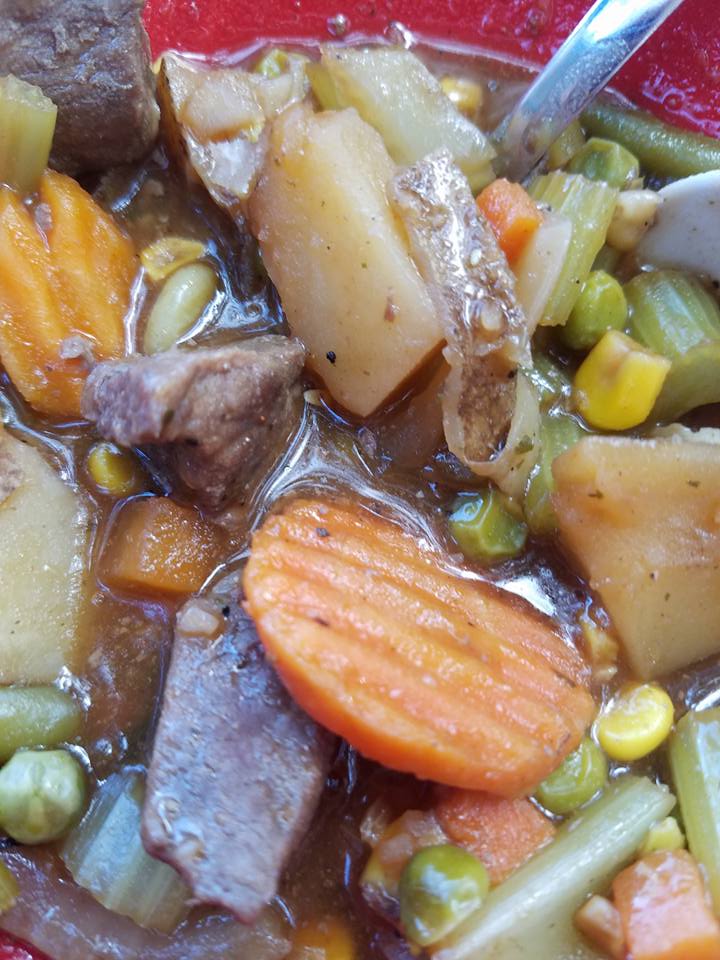 Meal #7 – Beef stew.  This was our experiment.  We did this from scratch as well, with 1 lb grass fed stew meat, fresh onions, potatoes, celery carrots and…well… a bag of frozen veggies.  At first we thought it was a fail because the beef was super chewy with the first bowl, but after giving it another hour, it was PERFECT.  So, two options next time: make with ground beef, or know it’s a 3-hour wait for this one. 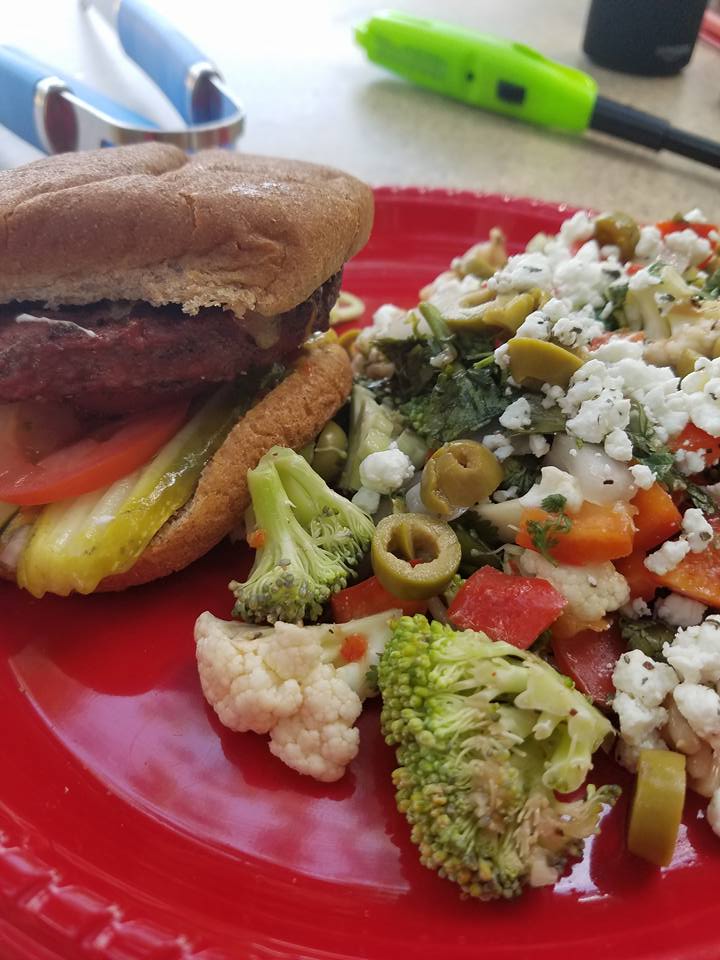 Meal #8 – Burgers.  Because you’re camping.  We only brought two grass fed patties and ate them the second to last day with a side of veggie pasta salad.

One cannot live on main dishes alone, so here’s the support crew of snacks and sides…

Fruit.  I ate a bag of cherries in two days, and the rest of the days I noshed on plums and cuties.  The plums were a little too ripe and half of them went bad but I am just peeling the last clementine now.  Next time, I might pick some more HYRDRATING things like melon, but it was also nice to not have to refrigerate them. 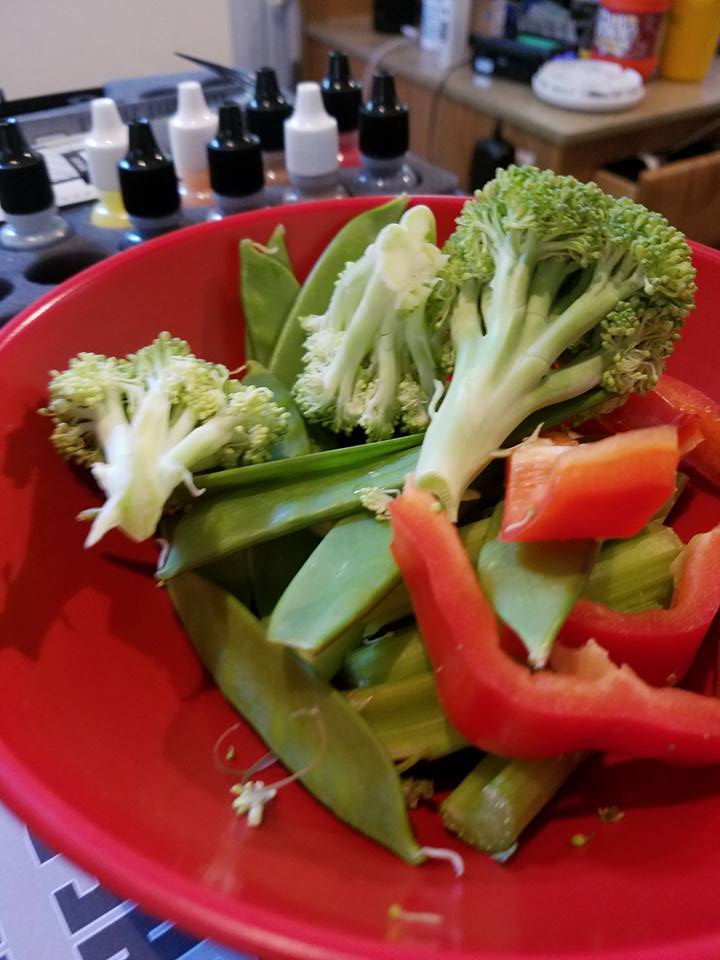 Cut up veggies and hummus.  Since we had a ton of meals involving fresh veggies, the leftovers went to snacks.  Sadly, *some* of them went bad but I’m going to chalk that up to them being held hostage by the other (heavy) cooler on top.

Roasted corn.  Because, you kind of have to when camping, it’s the perfect grill veggie. 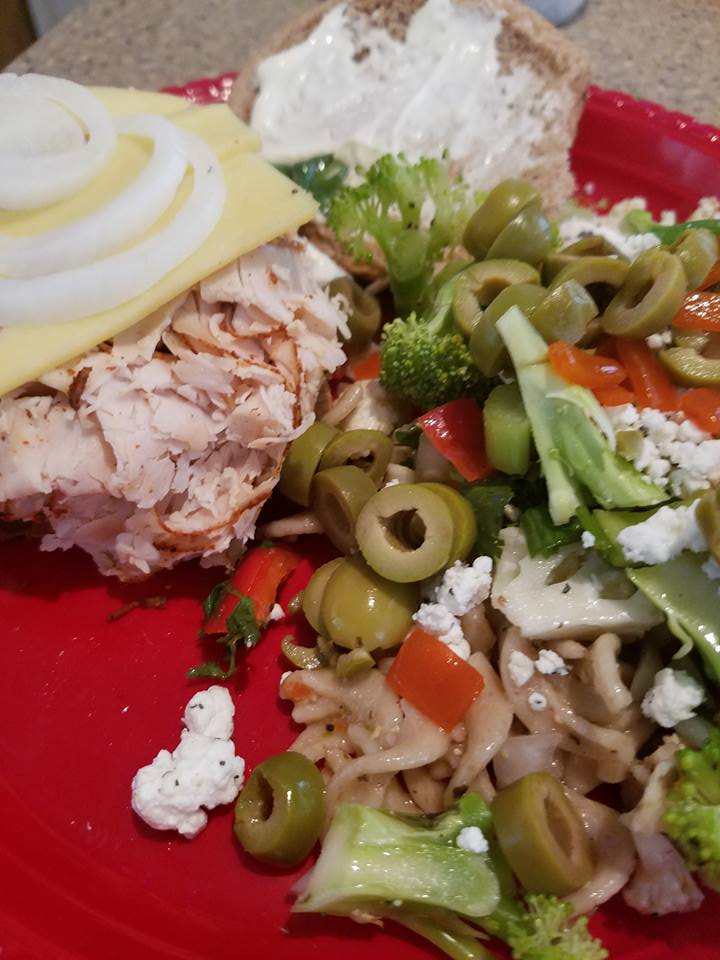 Veggie pasta salad.  This was the experiment.  I was going to prep it ahead of time but I got busy, so I legit just brought all the ingredients (5 different types of veggies, dry pasta, oil and vinegar, spices, two types of olives, feta, cilantro) and it took three days and three smaller Tupperware to make it, but on day four… it was worth it and was 3 servings of side-dish love.

Jerky, nuts, and protein bars.  Since I was missing my normal yogurt breakfasts, I felt low on protein all vacation.  This helped. 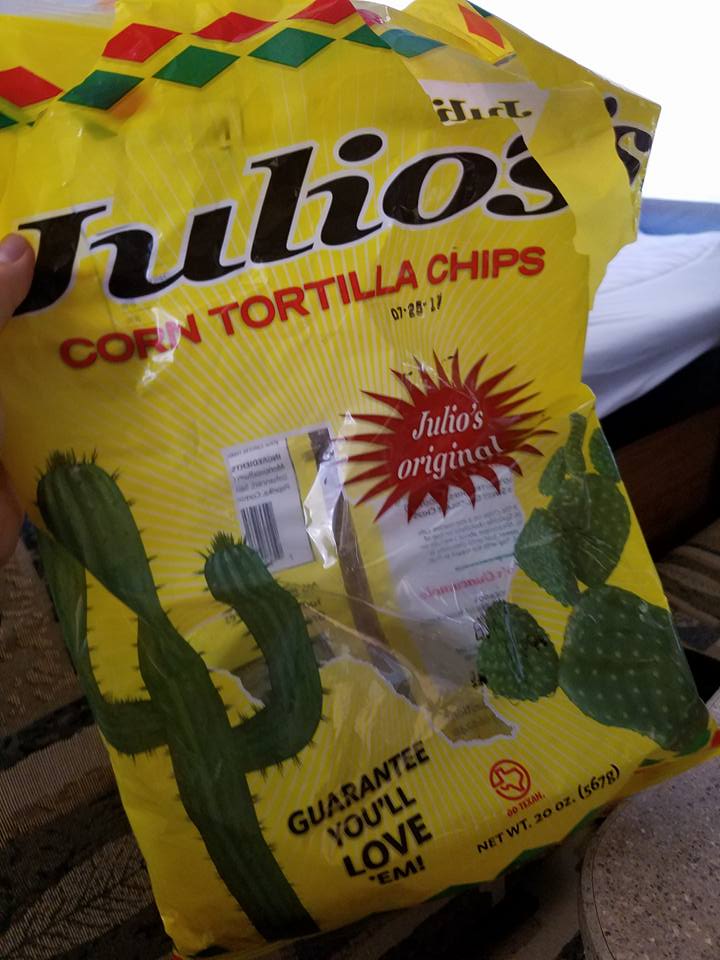 Julio’s tortilla chips.  Hint: avoid these.  They were so addictive that we went through 20 servings of chips in like 5 days (instead of those veggie snacks).  Then we looked at the ingredients and whaddya know, the third one was MSG.  My plan was to just bring a smaller bag of chips for both of us and next time I would try to keep it to that.

Smores. This was a challenge because we rolled sans fire.  We roasted one marshmallow on the propane burner and put one together and that was okay.  Then, I put together two smores and wrapped them in foil and put them on the grill.  Much better. 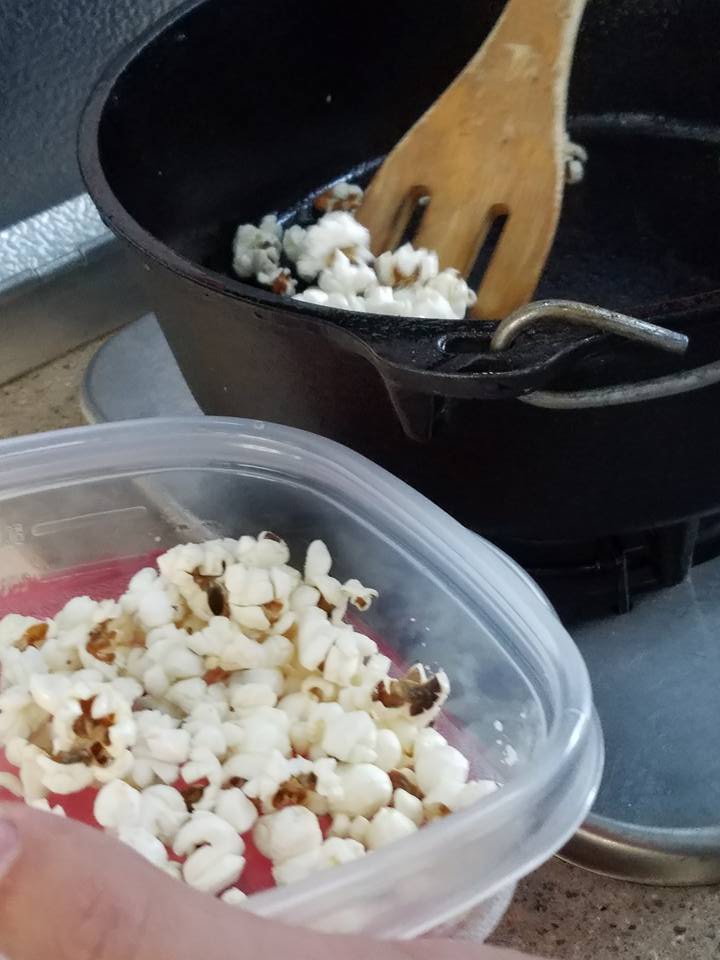 Avocado oil popcorn.  This may be one of the best things I have put in my mouth in a long time, and it was SUPER simple.  Avocado oil in dutch oven.  Two kernels.  Wait until they pop.  Put more in.  Wait until the popping slows.  Salt.  Serve.  Wonder where this has been all your life.

Fourth of july oreos.  Because it had pop rocks in the middle… duh!  I think we still have 2/3rds of them two weeks later.

For those of you who are interested in even MORE details, read below.  Here’s my entire packing list to keep two people fed well for a week.

Meats (all of these lived in the big cooler with all the ice and stayed at least fridge temp the whole time):

Produce (and what I planned to use it for):

I am a condiment aficionado.  You might could get by with less, but I feel like the space was mostly worth it.

The rest of it:

And we tried to go minimal on dishes, here’s what we brought:

All in all, I think we did REALLY well on our first trip out.  Here are the few observations and things I might change next time:

Camping food is magic.  First of all, it tastes WAYYYY better than cooking at home.  Also, I ate and drank like a big piggie, and I didn’t gain any weight.  Magic!

Do you have a great dutch oven recipe or an idea of something great to eat while camping?  Hit me up!