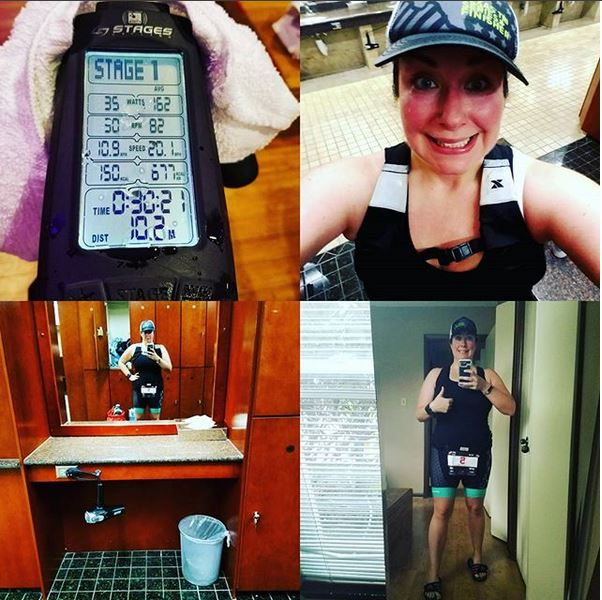 While the reason for the ridiculous time was actually allergies, it wasn’t too far off from my 5am alarm for the Lifetime Indoor Tri.  While it was fairly inconvenient timing – I really should have spent the weekend logging more saddle time and also getting prepped for camping next weekend – I love this stupid little race and I couldn’t say no when Zliten gave me the puppy dog eyes to sign up.

Funny thing – on the way into work Monday, he was like, “wow, I didn’t realize how much this would disrupt our week”, and then, thankfully, “I see what you were saying…” because, yeah, I did complain about it.  However, even given the alternative, I’m still glad I did it.  It’s a great opportunity to start chipping away at the bottom of the well of the pain cave to make it deeper for the races that actually matter later in the year.

I did more of the things right than I did last week.  I ate a full sunbutter and honey sandwich, I had a few caffeinated beans and my earl grey tea (hot).  I also woke up in enough time (barely) to use the restroom enough so my stomach was clear before the race (grumble grumble maybe I do need to set my alarm earlier grumble grumble).  I went into the race feeling probably just the right amount of pressure – I wanted to do well and I knew I had a chance to podium, but it wasn’t like… the most important thing in the world.

I slipped into the water and found a song that didn’t suck on my swimp3 player and was actually longer than the 10 minutes I was going to swim, and the countdown started… 3, 2, 1, and I pushed off the wall.

I am a steady pace swimmer, I’m not one to sprint out of the gate, and I saw my husband, who was sharing a lane with me, pull ahead.  I knew we had different swim styles, and the last thing I wanted to do was race him head to head getting in each other’s way, so I actually dropped back a little and drafted off him for the first half.  He started to slow, so I passed him and offered up my feet to draft on – I think he hung on for a while but by the end I was approximately half a lap ahead of him (though since he made it halfway we both got credit for our 19 lengths).

Exactly the same as last year.  Considering how different this pace is from my normal swim at Pure’s pool (which is admittedly a little short), I think their pool is a little bit longer than 25m.  Though, I’ll never know.  Last year I was definitely in better swim shape at this point, so I will take it.  Could I have pushed harder and maybe eeked out another half or full lap?  Probably, but I always see my swim as my warmup, and honestly, anything I gain by pushing really really hard and redlining on this leg generally counts against either my transition or bike.  So, I don’t.

That’s not to say that I don’t plan to work on my swim, or work on efforts in practice that would be considered finding my edge… but that’s not where I need to be in racing.  In non-drafting triathlon, there’s not a huge advantage to coming out of the water in the first pack so I’ll continue to swim uncomfortably comfortable and save the puke-worthy efforts for later in the race.

Having 10 minutes to transition always seems like such a luxury until you actually have to manage it.  I finished at the far end of the pool so making my way back took probably a minute.  Then, I put on my bibs and jersey and grabbed a bag I had put together with all the rest of the crap I needed (good job, past me, that was helpful), and got to the cycle studio quickly.  However, I didn’t do a great job at making sure it was all packed efficiently (bad job, past me) and after fumbling with my stuff I was on the bike and pedaling just in time.

This level of effort always surprises me this early in the year.  I’ve not prepared specifically for a sustained 30 minutes of pain – I’ve been either riding easy to recover during half marathon training or doing shorter (1-4 minute) intervals.  I had a number I wanted to see (170-180 watts), though I had a coin flip in my head whether that was the right one, and I knew the effort would sort itself out eventually.  Watts don’t lie when pitted against level of effort.

Ten minutes in, I wanted the watts to lie to me a little.  I was holding in the low 160s, which was not *terrible* considering I don’t those bike’s sensors calibrations from a hole in the ground, and the effort felt like “kill me noawwww” but not “I’m dead”.  I did take 15-20 seconds every few minutes near the end to get out of the saddle and jog, dropping my watts a little, but I had to do something to break up the seemingly never ending UNCOMFORT.

Just like tempo runs, FTP testing/long intervals are my least favorite bikes.  Which means I need to do more of them.  The best way for me to force myself to do more of them is to go to cycle class and schedule them in the program and also maybe do some TT bike racing if I can find such a thing that fits in with the sprint-triathalon-a-palooza I plan to do this spring.

Considering that I was all bike all the time at this point last year, and in the last few months my cycling has been sporadic and highly recreational, I’ll take the .2 mph in reduction from last year.  Things are looking good for when I actually start digging into getting fit for a short and painful sprint triathlon bike split this spring.

Here’s the painful part, I crunched the numbers and if I would have pushed harder (10.4 like I did last year), I would have ended up 3rd overall.  It’s a great confirmation that it’s. all. about. the. bike.

Again, five minutes to walk next door and find a treadmill sounds luxurious, but I decided to change out of my jersey (on the gym floor, I am the opposite of modest) and futz with my shoes a bit and music and then OMG all of a sudden it was 3, 2, 1… GO!

I was super excited to crush this 20 minute run because I had been training for this – all the intervals I’ve run in the last six weeks may not have necessarily paid off for the half marathon, but surely it would help me here, right?  I had wide eyed dreams of holding some 8 minute mile pace because I actually have some experience at that this year.

However, I forgot about the whole “off the really hard bike” part of triathlon.  It’s been a while.  My goal was to start with low-9 minute miles and see how quickly I could get into the 8s.  My legs had other plans and felt incredibly noodle-y off the bike and that was a hard NO out of the gate.

Luckily, 10 minutes/mile felt fairly relaxed, so I got my bearings there and quickly found the oomph to press the UP button on the treadmill speed a few times until it felt ROUGH around 6.3.  I stuck with it.  My heart rate wasn’t pegged yet (it was high 160s, low 170s, I know I have a little more before I hit my ceiling), but my legs just felt like lead and it was taking all my concentration to keep them turning over fast enough to stay on the treadmill.

I spent more time than I wanted to in those mid-9 minute miles because I barely felt like I was hanging on, but then I found something else with about 5 minutes to go and picked up the pace.  I finished strong and improved on last year.

While this is confirmation that my run still needs work and is still my lowest ranking in the disciplines, it’s getting better.

I’m really happy with my speedwork allowing me to dig deep and not surrender here. A scant .05 more in 20 minutes seems like an incremental gain, but I will take it.  I think what I’m more proud of is the process.  I felt the uncomfortable part of the run where I wasn’t sure I could hang on AND I DID.

I need to do that and feel that feeling a million more times over the course of this year and realize that I’ve got more in there than I realize, I just have to get messy and tap into the uncomfortable place, and frankly, blow the hell up a few times to find the line.  Not quit because my brain says it’s hard.  Not quit because a stupid injury is nagging at me (though obvs. I need to take care of these things).  No, I need to find the point of being crumpled up on the side of the road dry heaving and barely able to stand.  Only then can I *really* know where the line is.  For the last few years I’ve been working on finding the endurance line which is actually really effing far given a reasonable pace and proper training.  Now I’ve got the need for speed.

2018 is going to be the year of HANGING THE F%#K ON.  I’ve been whining about my speed for years, but I haven’t been willing to do anything about it.  Why?  Because that work isn’t sexy and it’s really brutal.  It’s thrilling to go through the process of doing your first Ironman.  Century bike rides!  Twenty mile runs!  You look accomplished as f#&k on the instagrams.

The kind of work I’ll be doing this year will look totally weak in comparison.  Taking 20 seconds of a 5k PR, hell, finding my 5k PR again from many years ago, these things don’t smack of the heroic.  But, they are the horses that I’m choosing to chase down this year in the pursuit of race podiums.  The end result is sexy.  But the work to get there totally isn’t.  Gotta keep my eyes on the prize though!

Overall – I ended up 6/17 in the open women’s division.  If I was 2 years older, I would have ended up 3rd in masters and if I would have pushed harder on the bike…. yeah.  A little disappointed at the result but not at the process so I’ll move on and take it as fuel for the fire to train harder for the races that really matter in the spring.

Next up in the crazy winter race-a-palooza, the ill-advised six hour bike race.  I can’t lie, I would love to see a podium here (but certainly don’t expect it) and depending on who and what (aka – my brain and legs) shows up, could either be a hilarious notion or a distinct possibility.