This race.  I love it, but it doesn’t love me back. 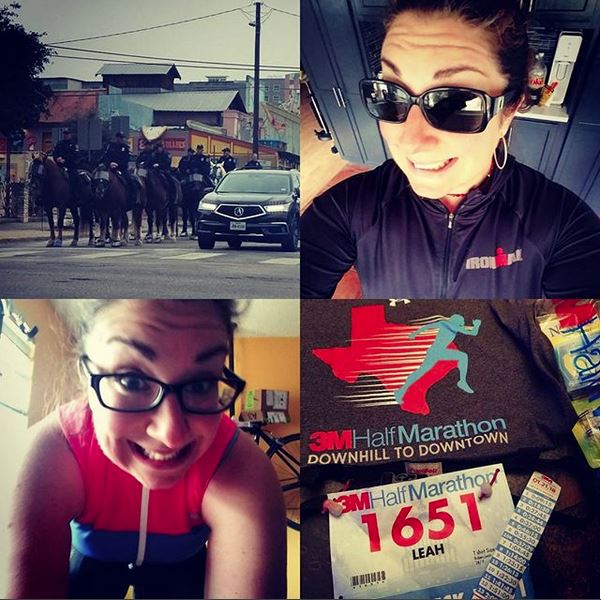 The cycle usually goes something like this – early in the year, I sign up for this race.  I think “next year, I’m totally going for a PR.  The course is perfect, it’s January so the weather can’t totally suck, and I’ll actually train for this one.   For reals.”

This time, I had even designated it as a goal race and made plans to train.  For really reals.  And then I was dealing with minor but nagging injuries with my left heel, ankle, and knee, so I cut into the beginning of this cycle to rest.  I let it heal, but apparently didn’t solve the actual problem, so the pain came back once I started running again.  It was never to the point where I couldn’t run 2-3 days later, but the carefree happy fun run love I’ve experienced in previous winters is so not there this year.  I’ve spent the entire last five weeks playing the “is my left leg going to let me run when I need to train?” game.

The answer, fourteen times, has been yes, since I started training December 18th, but it was always a question and added stress.  After feeling like a rockstar crushing my speedwork on Monday, my knee/ankle started to hurt an hour later and took much longer to feel better than normal.  I skipped last Wednesday’s planned run entirely and my foot never quite recovered, even staying off it for the rest of the week.  Three guesses how moody I was about that last week….

Saturday, we had family over for lunch and cards.  It was a wonderful day (and since we didn’t have long workouts in the morning, it was a very CONVENIENT day to host as well), but I did play it fast and loose with my pre-race nutrition by eating a lot more fatty meat and fiber than usual, as well as much more dessert than I should have because I am weak, it was in the house, and I couldn’t keep my grubby mitts off it. (cue ominous undertones)  Lesson learned.  Back to my tried and true pre-race meals and I need to be STRONG and skip dessert even if it’s around.

While I haven’t slept the BEST this week, I actually got pretty great pre-race sleep, almost 8 hours, which is kind of incredible.  I fell asleep putting myself through my race day plan repeatedly, which helps me wake up focused and motivated.  We both popped out of bed around 5:30 feeling fairly awake and refreshed.  I got a 10 minute bike warmup, ate, used the potty, and we left when we meant to and got to the race with plenty of time to spare.  Maybe today would be my day after all! 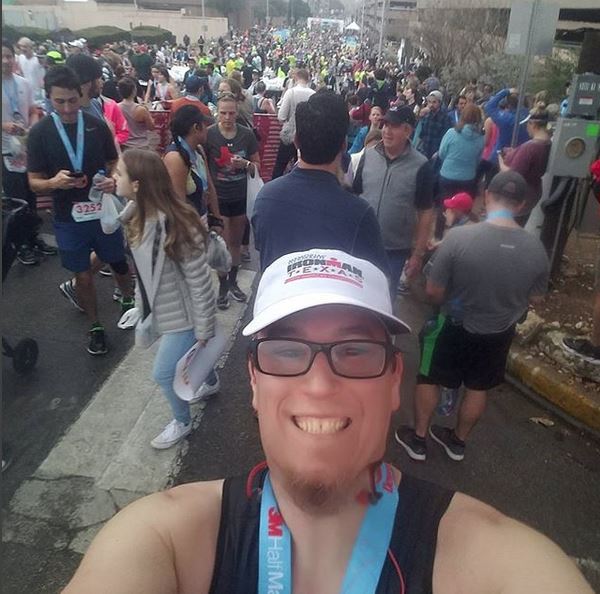 We hit the giant porta potty line, and then did some dynamic warmups and I went for a tiny jog to make sure my feet were working.  We found Brian and tried to get in at the 2:05 pacer, but everything was all blocked off, so we had to start in the back instead.  Around that time, I started thinking I could use the bathroom again, but the potty lines were still incredibly long, so I was hoping it was just the normal pre-race jitters instead of something more sinister.

I warned Zliten and Brian that I wanted to keep up with them, but I wouldn’t be talking at that pace, so I hid in my headphones while they chatted away.  The first few miles were rather uneventful, besides the lady I had to scream “OH MY GOD DON’T DO THAT!!!” toward, who was stopped in the middle of the road with 7000 other runners dodging around her taking a fucking selfie.  I almost ran her over.  JUST NO.  I told Zliten I felt bad about it because it just kind of slipped out, but he thought she needed to be educated as well. #sorrynotsorry

The pace felt just on the side of uncomfortable, but doable.  For now.  As my goal was to PR or blow up trying, I tried to keep my mile splits as close to 9:30s as possible, and succeeded through mile 6.  So far, so good, minus some wicked underarm chafing and a blister forming on my left pinkie toe (hello 70 degrees and 100% humidity…).

About halfway is when things started to fall apart.  The situation in my left shoe quickly went HIGHLY blisterific (I have no idea why – that didn’t happen in training).  This was altering my gate, which was making my heel and knee absolutely crank-tastic.  There’s a level of pain I’m willing to put up with to PR a half marathon, and between mile 6 and 7, it surpassed it.  I’m willing to dig deep mentally and work through being tired and normal muscular aches and pains but when my entire left leg starts to protest in a way that starts to feel like I’m doing damage, I knew I needed to cut my losses.  I slowed down about 30 seconds per mile and it felt better.  So I hung there for a bit.

I made sure to stick to the fastest pace I could, because at that point, I did have a little wiggle room.  If I needed to take an extra minute on miles 7 and 8 and I could speed back up after, I still had a shot.  However, the final blow landed during mile 9 when my gut started to revolt.  I was not entirely sure which end was going to win the privilege of introducing something from my body to the outside world, but either way, it was not going to be pretty.  Walking, I felt reasonably fine, running felt terrible.  I covered mile 9 in 11:17, running until I felt too terrible and then walking to recover.

I finally hit the porta potty (cue the angel’s chorus) at mile 10’s water stop for about five minutes.  While I couldn’t resolve the chafing, or my left leg’s utter rebellion, I felt like a new woman after that stop. Hooray!  I grabbed a nuun and was about to take off and saw Matt!

I felt bad because it meant he wasn’t having a great day himself, but it was nice to have a buddy to run/walk some 12 minute miles with.  I knew my PR was super busted at this point, and I didn’t care about my finish time one way or another.  Finally, Matt was tired of my company and shoved me ahead and told me to run to the finish, which I did, because finally, I could end this ordeal and rest my heel and drink some beer. 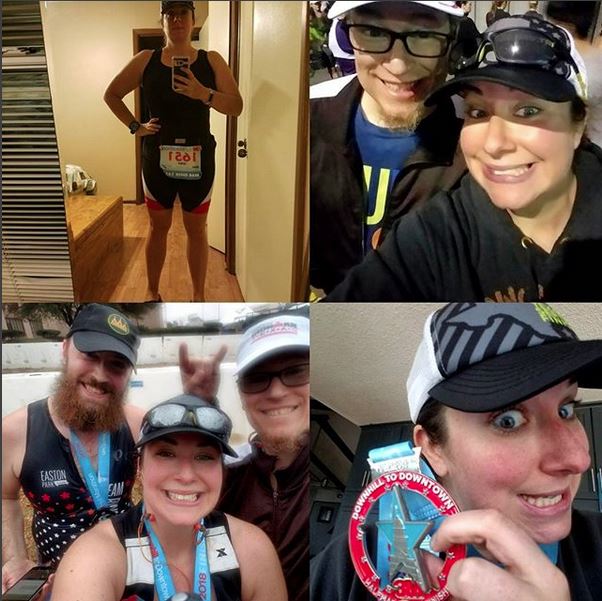 I was less bummed than I thought I’d be, for what months ago was going to be my goal race.

Even with the regular training, it’s now clear to me that I didn’t respect the distance.  I know the way I nail races, and it’s not on five weeks of training that flirts with over half the distance a few times.  It’s always nice to show up and give it a shot, which I did, but it’s not surprising that I wasn’t able to hold pace and fell apart.  I am a volume kid, if my body can tolerate it.  I train for a marathon, I take three weeks off, and then PR a 10 mile race.  While the speedwork is necessary for me to get my legs to turn over, the other component is miles, and 5 weeks of 15-20 per week or so just wasn’t enough base, which again, shocks no one.

Here’s where there is light at the end of the tunnel – I think I finally have the solution for the knee and foot issues.  Two weeks ago, my chiropractor suggested an insole that I’m currently wearing in my daily shoes. I might not hike on trails every now and then, but I did use the hiking socks recommended along with the pair of shoes. And they actually feel pretty amazing!  She did NOT recommend trying to get myself used to wearing them for a two hour race in that short of a time period, so I haven’t been running with them. Now that my volume is significantly reduced, I’ll be breaking them in and hopefully within the next month, my pain will be a thing of the past and I can be set up for a healthy tri season.  My next crack at the distance is off the bike in Cozumel, and honestly, that’s the one for the pesos (figuratively – I R NOT PRO).

Next up in our whirlwind winter race tour: lifetime indoor tri on Sunday.  I’m looking forward to the “go so hard you almost hurl” pace a bit more than I should be, and also (possibly unreasonably) hoping for high placement in the ranks and notching another fake-podium this year if all my appendages cooperate.