I don’t think I’ve ever been so unprepared for a race. 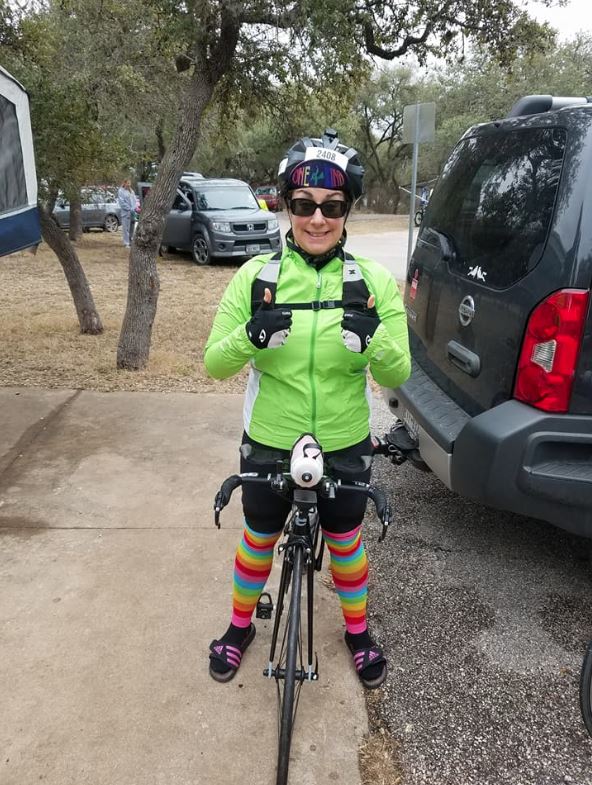 I’ve gone to races a little battered and broken.  I’ve shown up to short races with zero speed in my legs.  But generally, if I’m planning on an endurance event that will take most of a workday, I’ve trained for it.

I had INTENDED to train for 3M by doing a long ride every third weekend, but then I needed a brain break and my body was falling apart and vacation and then all of a sudden it was the end of December.  I had just a few weeks left and had to cram for a half marathon, which left little time for cycling, save 20-45 minute trainer rides and one very broken up multi-hour cruiser bike ride at 10 mph.

I had INTENDED to do a long ride the weekend before, but instead we raced the Indoor Tri hard and fizzled out after another hour on the trainer and called it.  We got in one 90 minute trainer ride about a week and a half out, which felt REALLY LONG.

Then, I decided to look up the start list and scope out who else was showing up.  Huge mistake.  I found six girls in my division, and most of them were cycling pros minus one super fast triathlete that always wins her age group.  Last year I was mid-pack.  This year, there was absolutely no way except for a mechanical on someone’s part that I wasn’t coming in dead f#%*ng last.

We got to camp around 5pm and set up and cheered the 24 hour racers off at 6pm.  It was actually quite inspiring because if the were going to ride bikes for a full day, I could do it for an afternoon.  It was chilly (40s), so I added some extra layers to my ensemble while we cooked pre-race dinner of chicken, potatoes, corn, and pre-made salads.  We enjoyed a leisurely dinner and bedtime since we had a lax wakeup time as our race didn’t start until noon.  More afternoon races please! 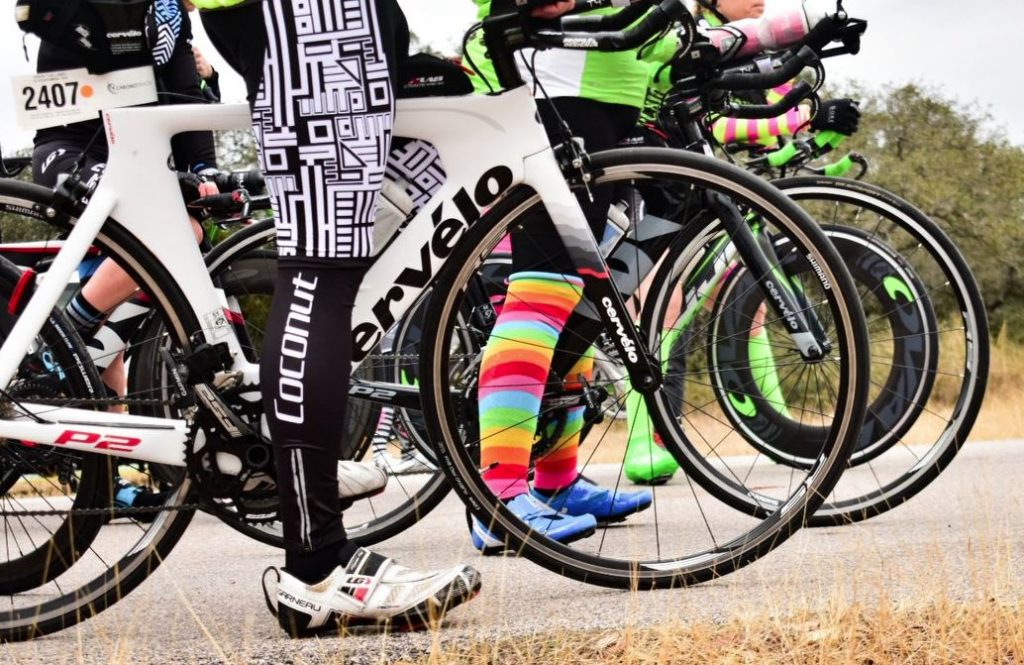 We had set an alarm for 10, but the camp got rather noisy after 8am (there was a race going on, after all), so we were up and had a very relaxing morning with green tea and bean and cheese tacos and split a turkey bacon guac bagel closer to the race.   That would never fly with a triathlon or running race, but my stomach is pretty sturdy on the bike and some good solid non-sweet calories really set me off right.  Again, more races starting at noon, please!

Around 11:45, we lined up with the other six hour racers, got a briefing, and got sent on our way right at noon.  As expected, everyone else in the race took off like a bullet and Zliten and I settled in at the back.  We made the call to wear our non-aero helmets that had our walkie talkies and try to hang together the whole race.  It was a challenge to sort out the cadence of following him because we had to stay non-drafting distance but couldn’t be *too* far or the walkies cut out, but we got it handled within a lap or two.

We made a quickie stop to pick up his inhaler after the first lap, and then watched the miles tick by fairly pleasantly and effortlessly at first.  I was amazed at how good I felt at 20, 25, and then just more than 30 miles when we made our first pit stop to get nutrition and fill bottles.  This was encouraging.  Maybe somehow my legs remembered how to ride bikes for a long time even after a 3 month break?

Credit – taken from Rob Jan Martinez’s event photos.  My layers were keeping me warm, but definitely not looking very sexy….

Around mile 40, my legs started to feel that little bit of fatigue burn.  While I was pretty impressed with how long it took to feel tired, I was facing the idea that the second half of the ride was not going to be so pleasant.  Time slowed to a crawl once my garmin hit 3 hours.  My 16 mph consistent pace started to slow in the 15s.  I spent some time doing the math here on how long laps were taking and how much time was left to distract myself from the unrelenting hills.

So, yeah, let’s stop for a moment and talk about elevation.  The course is a 6.2 mile loop with 300-some feet of climbing.  While that doesn’t sound like a lot, consider the 50 miles I had in my legs at this point had almost 3k of climbing.   My Ironman race had less than half of that in 112 miles.  There’s a decent size hill every mile here.  I am fairly certain that my legs would have had a little more in them if it wasn’t for the constant up and down.

I was shifting a LOT to keep pace and all of a sudden I heard a loud crunch and had no pressure on my pedals.  It sounded like a simple dropped chain, but when I got off to look, it looked all mangled in the gearing.  I figured I had done something bad to my bike, and luckily Zliten was within earshot so I told him to stop.  Since we weren’t supposed to ride backwards, I walked my bike up to him and he looked at it, shook his head, fixed my dropped chain (apparently they drop differently on the TT bikes…) and we were off again.

Before that stop we were skating the line between being able to make 13 and 14 laps, but this put us back a little, though 13 was still possible as long as we didn’t take too long at our last break.  We rolled into camp at 62 miles in just over 4 hours of riding (though it was about 4:25 total race time).  While my legs weren’t feeling awesome, I also didn’t expect to feel like a little baby deer all of a sudden when I got off the bike.  I spent 10 minute on the couch of my camper trying to stretch the cramps out and got myself up and back on the bike to make the cutoff of when I wanted to be back on the bike – 4:40pm.  This would give us time for 3 more conservatively paced laps + about 5 minutes of wiggle room. 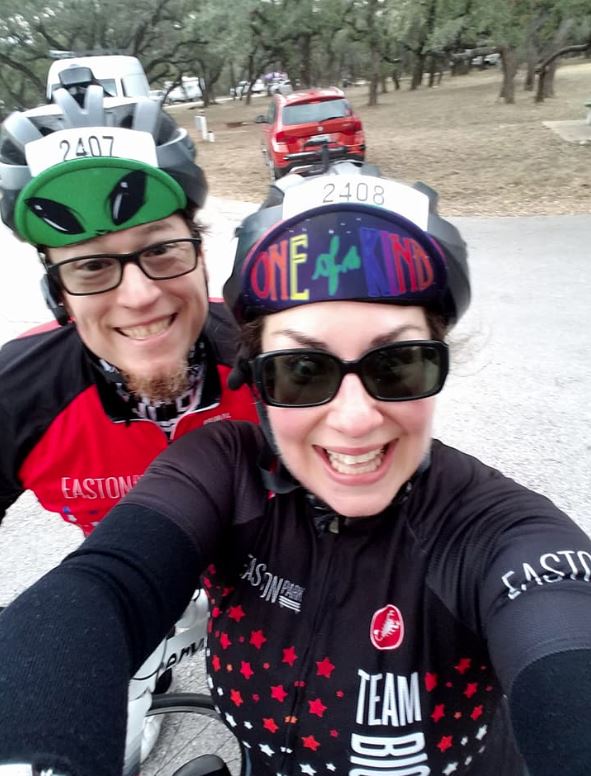 Then, I realized both of us were attempting to roll out without our helmets.   Right.  Race brain.  Grabbing them put us a few minutes behind so I attempted to pull us along a little faster to make up for it.  We timed lap 11 and we were on pleasantly on pace.  Lap 12, my legs started cramping again and I said that maybe it was time to go drink beer and watch everyone else finish, but Zliten convinced me not to, and then he unconvinced himself, but I was already re-convinced and in the mindset of “if I cross with more than 25 minutes to go, I can make the last lap” so we decided that was the plan.

We crossed at 5:33 and change.  26-ish minutes to finish one more and that was just enough.  Now, I knew this last 6.2 miles didn’t mean anything in context of the race.  I had been lapped at least twice by every single female out there.  My legs were screaming.  But, we both made the decision to make the turn away from BBQ and beer, sitting and salvation, to ride another loop around the park because that’s what mother effing Ironmen do.  It wasn’t our fastest lap but it certainly wasn’t our slowest, and we came around the last corner and attempted to line our wheels up to finish at the same time.

It didn’t work – technically I still haven’t DFL’d because it counted Zliten’s finish as one second later than mine.  We were the absolute two last people to cross the finish line with our 81 miles, and had the least laps by far, but it was still a glorious day of riding bikes. 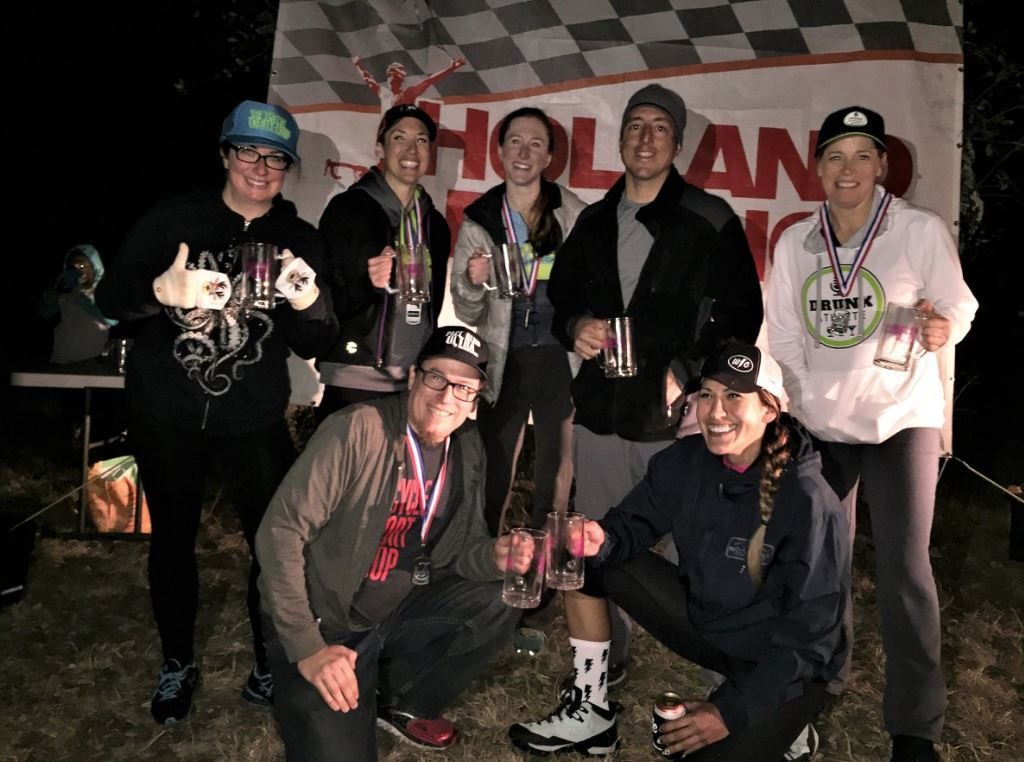 Riding 80 miles on no training is no joke, and I wouldn’t necessarily recommend it to the mass population, but it was a fun experiment to see what residual endurance I had left from last year.  While my legs fatigued a little early, they hung in there until the end.  And so did my brain.  I had a MUCH better day mentally this year than last year.  In 2017, at points I had wanted to throw my bike away and never see it again, and this year, I kept a pretty even attitude through the ride.  My speed was only 0.1 mph less than last year, so I missed that 14th lap because we took longer breaks, not because we were riding slower. And that’s pretty freaking impressive.

I ain’t even mad that literally everyone else in the race besides me got a medal because there happened to be 4 people in my one age group, especially because 3rd place was a freaking pro cyclist I know who kicks some major ass on the bike.  I would have been outclassed on my best day and that’s just the facts of life sometimes.  There is no earthly way I could ride 100+ miles at 18mph right now and that’s what it would have taken.  To get third.  It was kind of freeing to just get out there and ride my bike and not worry about where I stood with anyone besides myself. 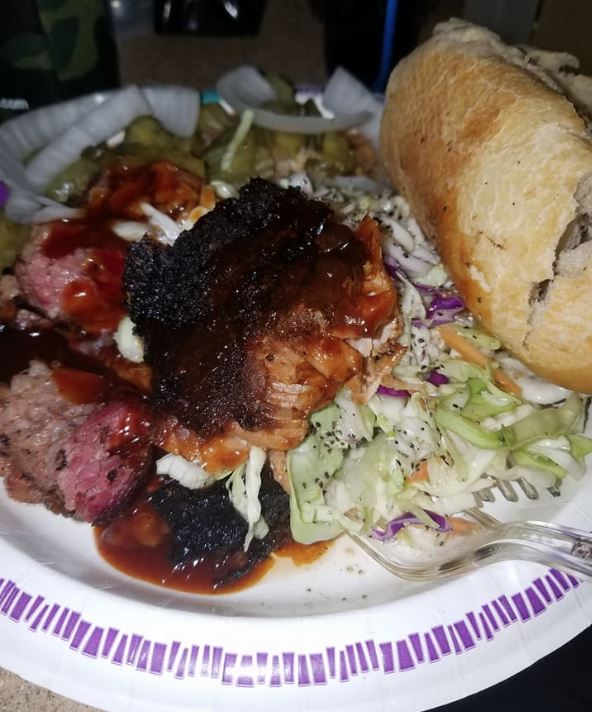 NOMS. Doesn’t look like much but the pork was DIVINE.

Oddly enough, when people have been riding for 6-24 hours straight, there’s not much of a party atmosphere after, so we were the sole racers awake after 9pm.  We followed suit not too far behind them after housing a giant plate of BBQ and talking a lot about how our legs were sore.

I’m really torn.  I said I wouldn’t do this race next year unless it was my focus, and it probably won’t be.  It was too expensive.  It’s too pro.  However, I had so much darn fun, I’d consider plopping down the scratch to camp for the weekend and ride bikes for the afternoon.  Maybe a relay?  Maybe offering to crew for someone?  Maybe just randomly try the 12 or 24 hour race and see how far I can go with a bunch of breaks?

Either way, this ended this weird little three weeks of racing on an unexpectedly happy and positive note.  Onward and upward!