Eight is almost enough (to taper)

8 weeks down, 4 to go.  We’ve almost arrived at the start of taper (SATURDAY is the last long brick of the year), and about another week after that until it REALLY feels like taper. 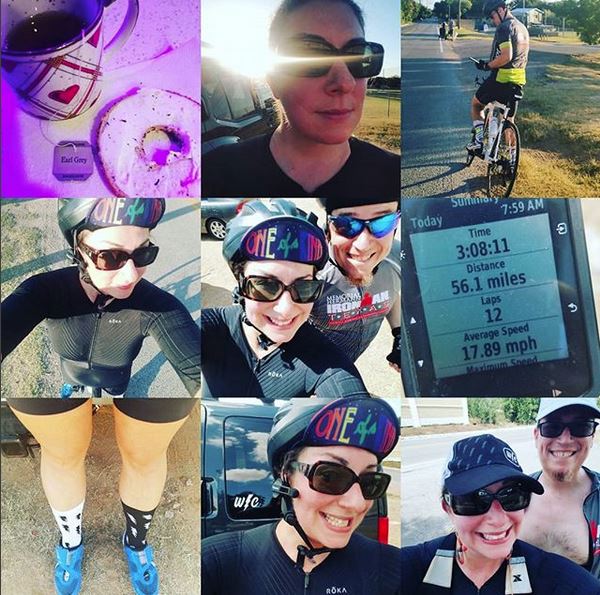 My life feels like one big training montage right now.  My insta feed reflects this.

I always have to remind myself that volume reduction always takes the first week to kick in, because 25% less doesn’t really feel like a *break* yet, especially if I slam into the end of the block feeling very burnt out.  Which I sort of am and sort of aren’t.

This time, it’s feeling a little weird.  The max I’ve been able to show up to is about 8.5 hours of training per week, and it’s a combination of SO MUCH and really not as much as expected.  Right now, with life and work and such the way it is, this is about what I’m willing to dedicate to sport.  I consider this about the minimum I need to succeed at 70.3 training, and to be honest, I have sessions falling off every week that I’m not 100% thrilled about, but the proof is in my performances and that is definitely working out.  So, maybe missing my 1 hour easy ride or 20 minute easy swim occasionally isn’t as much of a disaster as I think it is.

The good news is the important stuff I’ve been showing up to has been coming along phenomenally.  It’s as if my body remembers this distance (and maybe is thankful it’s not being put through double for a full Ironman), and is like,” oh, ok, this is what we’re doing now, got it”.  And, I think it’s only being so responsive since I took it really, really easy in terms of training hours for a good few seasons (and, probably banking on a few seasons before that with LOTS AND LOTS of training, because I usually see that pay off down the line, even if not always immediately).

Last week was one of those where I showed up and showed up hard for the key training, but let some other stuff fall away. 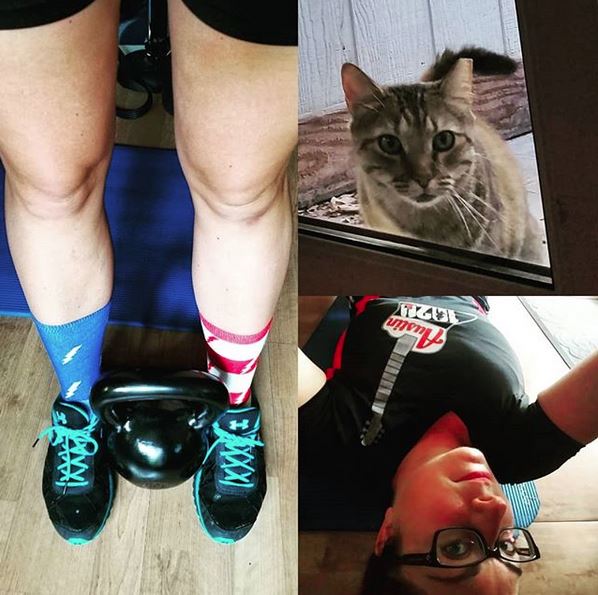 Personal trainer cat says “one more rep”.  Or “give me fish”.  They sound the same in meow-ese.

Monday: weights + <- planning this after work was not smart.  I had to set my alarm for 5:30am for the run the next day and getting home at 7:30pm still needing dinner… NOPE.

Tuesday: 12 mile run, 10:30-11 min/mile pace.  Nailed it.  Probably because I came home, ate dinner, and went DIRECTLY to sleep the night before.

Wednesday: off.  Didn’t feel like it with the crazy day at work but no workouts were had.  Took the opportunity to get some errands done after work because I cannot yet afford a personal assistant.

Thursday: long swim, bike/run brick. <- I knew with the day I had at work, I was going to be lucky to get anything in after I arrived, so I set the alarm again for 5:30am and did a 2000m swim, 30 min bike and a 2 mile run.  It was a really wacky distance Indoor Tri style but I got it done and it felt GREAT, actually!

Friday: weights + <- the swim was planned to be at lunch, but then I had a request for an interview at 1pm, which with other meetings and media duties left ZERO time to actually take a lunch hour, and I ended up leaving late around 7pm anyway, with a plan for a 5:30am alarm and some errands to do… another day of NOPE!

Saturday: 56 mile bike + 2 mile run.  Third pre-dawn alarm for the week, and got this done just barely in time to clean up super quickly, run some more errands (I was on meat duty for the party!), and show up about an hour late (sorry I TRIED) for my friend’s baby shower/party thingee.

The workout in and of itself was LOVELY though.  I tested out my new Roka kit that I plan to wear at the race and it held up amazingly well.    Three hours on the bike felt like playtime at the 18 mph/150W I was trying for – while I fell a little short (17.9/146W, 170 normalized though, so yay!), I did have to come to 3 stops per 3.5 mile loop and avoid three speedbumps 16 times, so I will say good enough.  The run was hot, but my legs felt pretty darn good.  Though I didn’t have *too* many more miles at the 9:30/mile pace I was cranking through, I think the slower pace I plan to run on race day will feel great.

Sunday: off.  I had hoped to maybe get the swim or bike (or both) made up from earlier in the week, but I was just so effing FLATTENED from the week, I didn’t leave the couch (I got approximately 2000 steps for the day).  I just ate all the leftovers and watched TV.

Monday: 13.1 miles 10:30-11 min/mile pace.  While this is technically week 9, it was on Labor Day so it felt like the weekend.  I set my alarm for 5:30am, but snoozed it for TWO HOURS.  Thankfully, the weather decided to be a homie and it was cloudy and not completely terrible when we got out at 8:30am.

The Garmin story looks like this went perfectly.  What it didn’t say is that around mile 7.5 my legs started to cramp and I realized that forgetting my salt pills and only stopping once for water was not a good idea (when I was 2.5 miles away from home).  I powered through to mile 10, but the last 3.1 was in less than 1-mile chunks, having to either circle back to the house for water, stop to stretch leg cramps, or just pant for 30 seconds under the shade of a tree to catch my breath.  The good news is it’s fixable (remember the pills, hydration at the race every 1km), so I’ll just chalk it up to a lesson learned and move on. 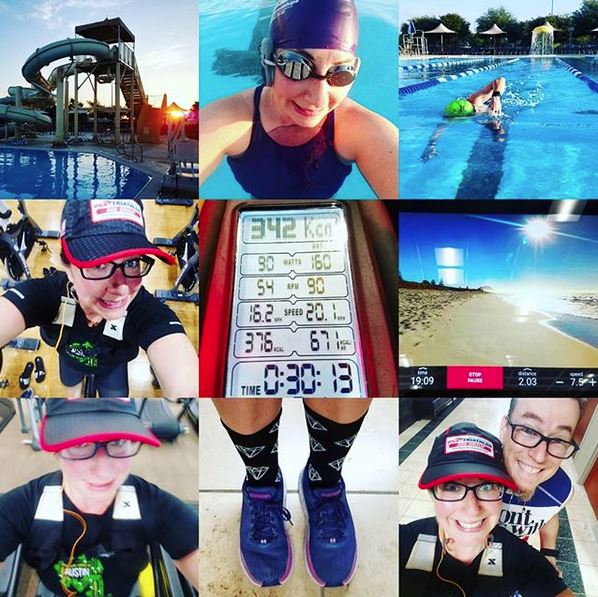 Thursday’s workout was swim, bike, run, and then go boss people around and then live stream for 3 hours.

The rest of this week has a few key sessions:

And then, taper begins.  I have plenty of thoughts on that but I’ll save them for next week. 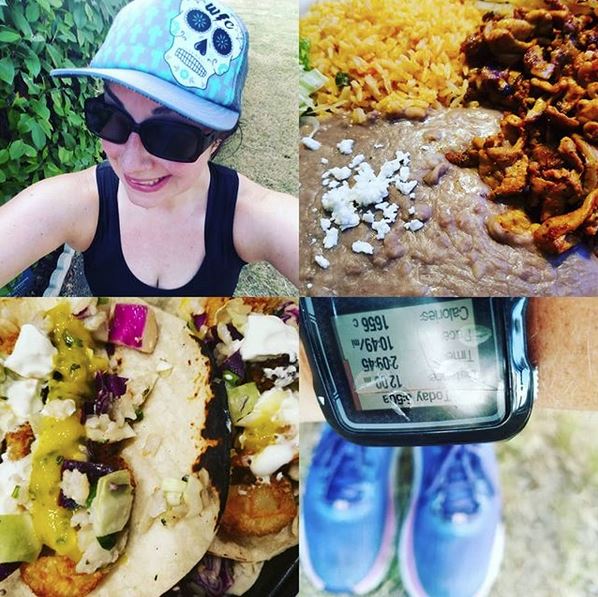 Running 12 miles means you get tacos twice.  That’s the rules.

Everything else right now is just kind of sort of a footnote in priority, but for posterity…

I seem to follow about the same pattern – great nutrition during the week, and then Saturday is a free-for-all.  I’m going to let that go for another week or two but I’ll need to shut that down in taper when I’m not working out as much.

My weight is slooooowly creeping down on Trendweight.  I’m ok with this.  I would like to AVERAGE 170 by the end of the year, and I’m 2.7 lbs away from that as of this moment.  It looks like it’s doable by the end of October, which, coincidentally, is the end of my race season.  Hopefully, that can keep me on the straight and narrow both during two tapers and then to maintenance mode after, as I will be jettisoned directly into holiday seasons without a huge activity cushion.  Scary!

I was whining this weekend that none of my clothes fit me (in the opposite way than normal…).  So, I went shopping on my lunch break today and apparently I wear junior size 11s and missus size 8s.  Apparently, at Kohls, there are junior booty shorts and women’s… are pretty much down to my knees.  So I bought the booty shorts because life is too short to wear long shorts when you have nice muscles from training. 😉

More good news!  While I <3 me some snap kitchen, I have been doing it on and off for 6 months.  They change their menu around a little, but I’ve been eating a lot of the same stuff for 6 months every week or two weeks.  It was nice to find some alternative meals at Costco called Perfect Fits.  So far, they’re really tasty!  I had a Southwest Chicken meal yesterday and it was REALLY good.  Like, better than I expected.  The chicken pasta today was pretty good as well (with some added spinach… and salt…).

In not so good (possibly TMI) news, two weeks ago I developed a rash on my stomach and back that didn’t go away for a week, so I went to the doctor.  She prescribed me Methylpredinsolone (steroids, but apparently the super weak kind) and after I got over the fact that I had to take medication (like, a real prescription drug, not tumeric or rub some coconut oil on it or something), I actually was fascinated to document my experience.  When I searched for information on it, I didn’t find much about what to expect/do to make it better, just what to avoid.  So my take on it:

The good news is the rash is pretty much gone at this point, and I’ll continue to take the Benadryl and Claritin once a day until it’s all the way gone and I’m sure it won’t come back.  I’m also attempting to shower a few times a day and try not to get super sweaty and sit in those clothes (it’s hard when you’re a hippie for life), but the weather isn’t making it too easy.

But fall is coming.  Soon.  Let’s all hang in there!