Life has been whirlwhind-ly hectic this week/month/year, and I feel like I used a lot of words on social media to talk during the days around the race, but I still always like to put together these reports for posterity. So, let’s do this! 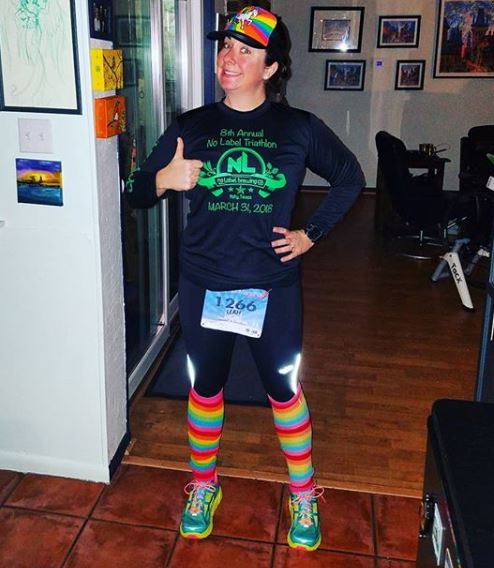 This is the first year I haven’t had any high hopes for this race.  3M has fooled me enough times already.  I’ll sign up really early in the year, purporting that THIS IS MY YEAR TO PR and then when winter comes around I’ll train halfheartedly or start training really late after a triathlon offseason, or maybe even train seriously and be dedicated to a plan and then I perform somewhere between OKAY and TERRIBLY –  like last year.  I always want to love this race, but it’s never loved me back.  I decided I wouldn’t get fooled again (no no), and I was running this one purely for funsies.

Saturday went fairly normally, but not *quite* to pre-race spec.  I had a giant club and soup for lunch instead of a turkey sub on wheat and had turkey meatloaf, mashed potatoes, veggies, salad, and some tater tots vs my normal grilled chicken potatoes and salad.  Similar but not the same.  Instead of swimming, I rode the trainer for 20 minutes.  Packet pickup saw my legs and back and neck start to ache.  We were rear ended while driving home Friday, and apparently, it was not one hundred percent without bodily consequences.

I wore stars all week as I could because stars have just felt right lately, so I kept that clothing trend going. Perhaps in the attempt to influence them to align the next day? 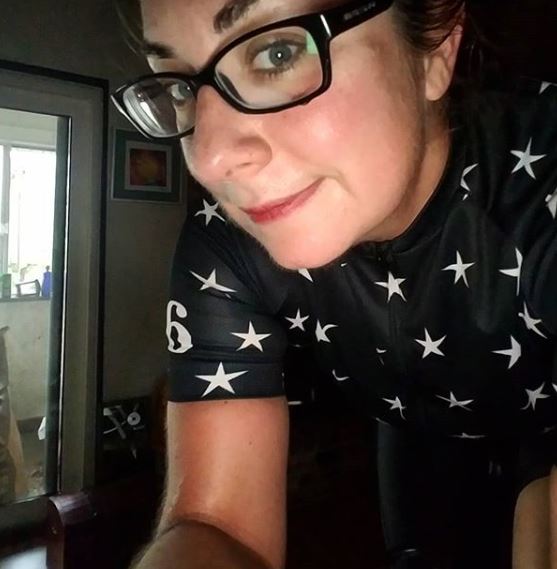 The headspace is always different staring down a starting line so early in the season. There were the nerves and doubts stemming from the utter lack of preparedness. On one hand, my thoughts rang with self deprecation – the eff am I doing out there on a literal handful of runs in the last three months? But… there was also some budding excitement after the killer twelve I ran the weekend previous. I was an unknown quantity and there’s a lightness that correlates with the lack of expectations.  That was neat after driving myself batty this fall under the weight of them.

I planned to run this one pretty much solely on perceived effort. I watched Dune that afternoon, and they constantly quoted, “fear is the mind killer”. I aimed to go out there the next day unafraid to put my hand in the pain box and then let the chips fall where they may, no judgies. Ok, maybe very little judgies, I’m not really good at rationalizing not being good, but I honestly was just so happy about the run the weekend before, even if I choked at the race, I had showed promise.  That was good enough for me to feel optimistic about the season to come. 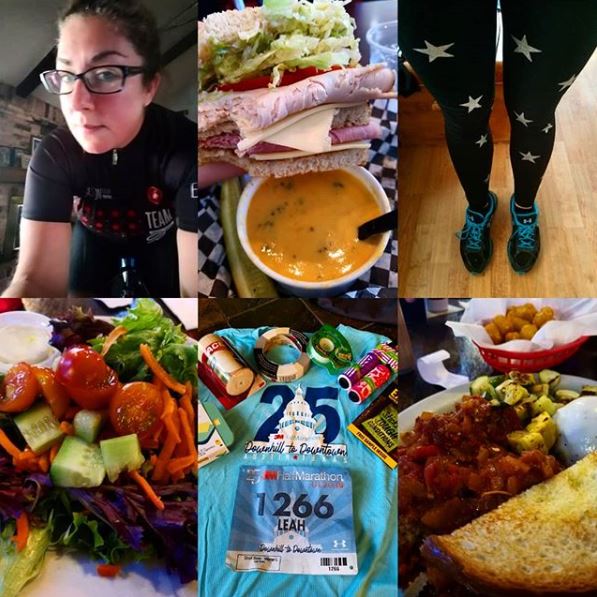 I did my best to spend the rest of the day relaxing, actually sleeping rather decently.  All the thoughts rattling around in my head didn’t perturb me as they had earlier in the week, probably due to the fact that I mentally reserved the two hours of the race to ponder and let my thoughts distract me from the effort. Oddly enough, I didn’t need distractions the next day, I was happy to be present and inside the effort, but it was a nice balm to put me to sleep the night before.

I woke up race morning at 2am with my glutes and lower back seizing up. More fender bender after effects. I fell back asleep on an ice pack and woke up two hours later and it felt kinda touchy but OKAY. I would start.

I hopped on the trainer for 15 minutes to spin up my legs.  I ate a mini bagel with bacon and cream cheese and two caffeine beans.  I drank my earl grey tea, hot.  I was up early enough to use the bathroom about 3 times before we drove to the race start, but of course I STILL needed to hit the porta potties, which continued my tradition heading out on the course almost at the back of the field (about 11 minutes after the race started), but let’s just say it was worth it. 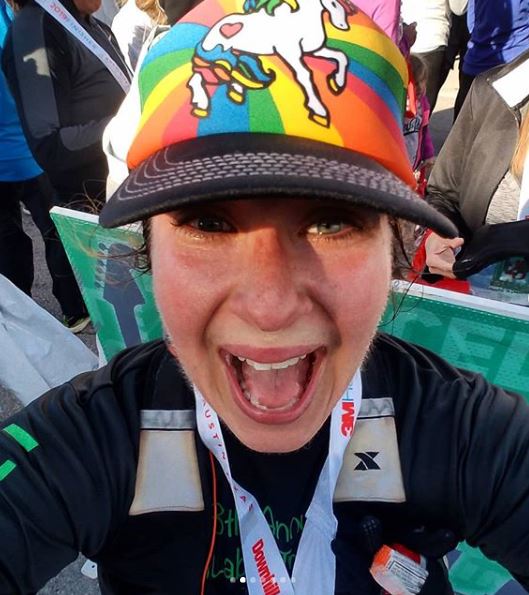 At the outset of the race I was freezing (the feels like was in the 20s) but less than a mile on the course and I was like, ” why the eff do I have all these things on my body” and while I fixed that by ditching my Goodwill sweatshirt and wrapping my buff around my wrist and pushing up my sleeves, I dropped my phone and took about twenty seconds on the side of the road situating myself.

That’s the last of my complaints. My stride felt awesome, better even than last week’s magical run, and the mid 30s temperature that irked me so much before felt absolutely perfect. Derezzed came on and I pretended I was a Tron light cycle avoiding all the slower runners. Blah blah blah came on and I dedicated that to the haters in my head saying I was going too fast while I continued to tick off consistent splits right around 9:20/mile.

I passed 10k, with my fastest time running THAT distance in almost 10 years and I still felt freaking amazing. I kept waiting for the darkness to descend, as it has every year moving down Shoal Creek, yet somehow this time I kept outrunning it with those consistent splits far outpacing my current personal record from years and years ago.

Around mile 9 it was no longer playtime, the hills began to appear, but I was ready for some pain.  Four more miles like this, I said.  Starboy came on (stars!), which is a terrible song if you listen to the lyrics but for some reason makes me MOVE and I found another gear to power up the hills that usually defeat me.  Then mile 10 was roooooough with another longer hill, but my random playlist struck back with Devil Went Down to Georgia (metal cover), and while that was my worst split of the day at 9:37/mile, it was still highly below PR pace.  As I did the math all I had to do was just hang the eff on.  I was so close I could taste it.  I hurt, but not insurmountably, and I was not going to let this slip through my fingers, not this time, no way in hell.

2:08 is my personal best. As I made the last turn and saw the finishing arch in the distance, I was on track to hit 2:04. I decided that I wanted 2:03 because this is how we do. I found a little something left in my belly and put everything I had into the last few minutes and crossed the line at 2:03:48. I almost both cried and horked at the finish (seriously, y’all, I gagged RIGHT NEXT TO A BUNCH OF SPECTATORS) but I held it together in both regards. 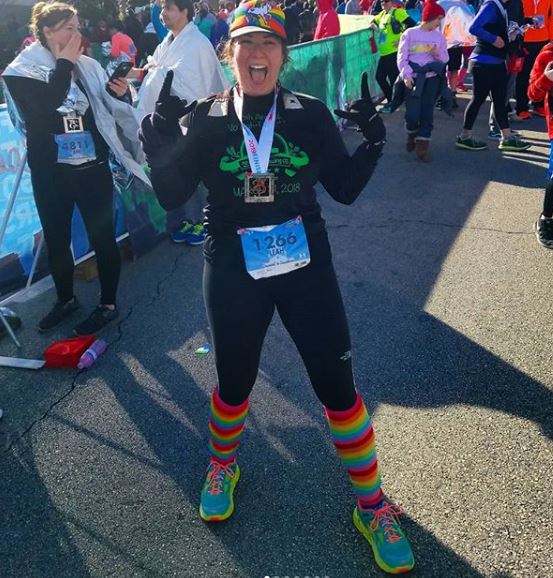 I can’t tell you how much this one means to me. More than finishing Ironman, more than qualifying for Nationals, this was not months but something I’ve been trying to crack for over EIGHT YEARS. From no hopes to almost a FIVE MINUTE PR in a matter of days after dozens of cracks at it over the years.  What a banner start to 2019!  I’m over the moon about this one.  It was awesome to go out with confidence even though I’m not a proven entity right now, and I had the courage to believe in myself, that I had the capability to push through when it started to get dark, and persevere right through the finish line.

I will note that this was probably one of the roughest recoveries for a half marathon yet.  I did have brief thoughts mid-race about really going for it and descending my pace another 10-15 second/mile and trying for a sub-2 hour half, but I decided that I didn’t want to jeopardize my PR and played it a *little* cautious so I didn’t fall down on the side of the road at mile 11.  It was a good decision.  My bodily conditions post-race told me that I had absolutely drained the tank.  I could barely walk the next day, staring down curbs like they were mountains to climb.  I took a few days off simply because I was tiiiiiired, yo.  I had some serious meetings on Monday and they. took. everything.  Today is the first day I’ve felt like a normal human.  I’ve felt better after a half ironman, maybe even some of my marathons.

And now, I have the opportunity in few more days to toe the line once more.  I’ll be racing the Indoor Tri on Sunday, and since I’ve done this one on multiple years, it’s a good offseason benchmark.  Hoping to PR all my legs, which would be 19.5 lengths in the pool in 10 minutes (I swam 21 today at a lesser effort so here’s hoping!), 10.4 miles on the bike in 30 minutes, and 2.33 miles in 20 minutes on the run (this one will be the toughest, I haven’t run this fast in FOREVER but with what I did last weekend… anything is possible).  Also excited to finish this little racing block and then move into for reals #preseason training with a plan and heightened attention to nutrition and a little more seriousness.  If this is playtime, I can’t wait to see what a little hunkering down will bring…