Week 42 and 43: Superwoman, the Sugar Monster

A little late, but here we go…

When I wrote out the weeks, I had planned week 42 to be the highest mileage week, then a rest week, then another peak week, and then taper down.  Due to scheduling constraints, I had to switch around my weeks, and that put my first 20 mile run was on WEEK TWO of training. Terrifying!  But it worked out, and I killed that 20.

Week 42 was a high mileage week without a long run.  I did 3 double digit runs, and 2 were back to back.  I LOVED training this way.  I’m not a huge fan of the long run – I know I need to do them because of the mental aspect of not stopping for walk breaks at mile 15, 18, 20, etc is not something I’m practiced at.  I think I’ve made steps to conquer it (haven’t walked yet this cycle) but after falling apart a lot in triathlons this year, I won’t write it off just yet.  However, I feel like my recovery is much easier when I do an 11/11 back to back instead of a high double digit run (16+), and I get MOAR MILES.

However, at the end of Week 42, the top of my calves/bottom of my knee felt really tight, so I cut the easy 5 I had planned as my last run of the week and just biked 40 miles. It was a nice change to spend some significant time on evilbike, and while it was frustrating to skip a run, I know it was the best thing as that’s the ONLY training I missed.

Week 43 was stepback week.  We ran 3 short runs during the week at easy pace (or as easy as Zliten decided to let me run, he doesn’t quite get being in first gear for an entire run).  Then, we did a 15 mile “shorter” long run.  I don’t know why, but after a week of recovery, my legs felt worse somehow, at least at first.  Every possible little niggle made an appearance, my arches started cramping around mile 6 and every turn or uneven road was painful, and the normal tightness in my glutes/hamstrings set in WAY early.  However, as long as I avoided the crappy roads, and though by the end, I walked 5 steps to get around corners and then got going again, I had a pretty darn good run at a pretty darn good pace (for me).

Now, I’ve got a month until the race.  I’m starting to think goals.  At first, since I had no run confidence when I started this training block, my goal was to just run this with Zliten, and hopefully PR (with a 5:22 – it won’t be too hard to do).  However, I’ve had a KICK ASS month of running and I think it would be a disservice to not shoot for something better, since I kinda feel like THIS lately with my running.

I’ve retrained my legs how to have some get up and go instead of shuffling.  I’ve retrained my brain to hold tough when I get tired or sore.  Those walk breaks that plagued me all triathlon season?  GONE as soon as the temperature dropped to normal human levels.  Part of it is the better weather, but I’m pretty sure I didn’t start improving this much just due to that.  Kerrville weather was perfect, and my marathon last year was not bad either, but I still fell apart and walked in both, so I’ll give the training at least SOME credit.

And let’s talk paces.  I’m not running these at 12 or 13 minute miles either.  I ran the 20 mile run two weeks ago at 11:41 average pace.  I just ran my 15 mile run at 11:05 average pace.  Both of these runs were prescribed as easy, and while my legs were tired and sore after, the pace never felt like I was doing anything above gear 2 (gear 1 being the happy, easy, pink floyd, daydreamy run, gear 3 being the “comfortable hard” pace that is supposed to be really bad for training because then you can’t recover for your speedwork and doesn’t help you improve).  It really makes me wonder… should I shoot for marathon goal pace to be faster?  It makes sense if I’m running these paces easy in training, right?  I’m going to need to do some research because the last thing I want to do is go out too fast and end up kersplat at mile 20.

My only other complaint is my right (not hurt earlier this year) knee is a little tender after some runs, so I’ll continue to ice and monitor it.  I just hope it can get through this one last high mileage week, and then we’ll rest up.  Please and thank you?

I don’t have all that much to say here.  I’m maintaining in the 175-176ish range.  I’m generally eating less calories than fitbit says I’m burning, but there are some days where I go over.  In general – I should be losing at least a lb a week but I’m not.

Either way, I just need to keep at it.  I’m over 10 lbs down from where I was in January, and I just need to not screw it up and keep fighting the good fight.  When I notice weeks like the last two where I’ve been indulging in heavier, higher calorie beer and sweets and not being careful about my carb sources, I just need to get back on it (and on it, I am getting).

I’ve also stopped weighing daily because the program I was using to track it broke, and I hate how judgey fitbit is about putting in a higher weight due to normal weekly fluctuations.  It’s working now, so I will start again. 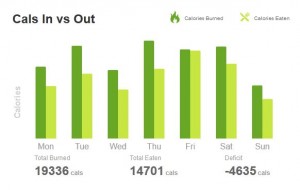 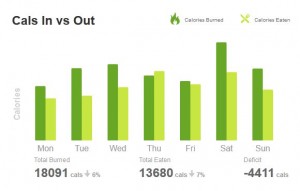 Next check in will include the last peak week (48 miles of running planned) and the first week of taper.  I’m ready for it!