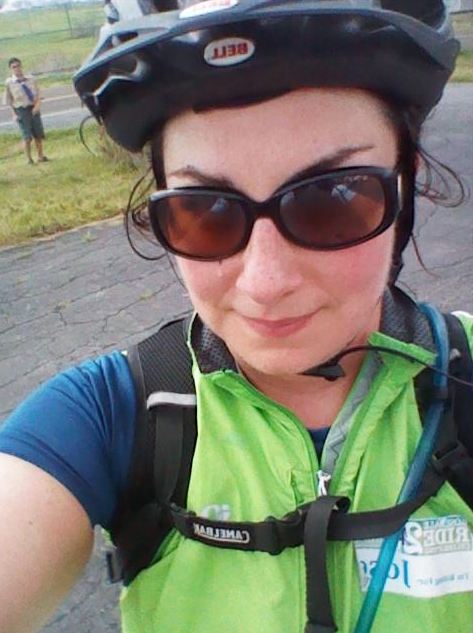 It seems to be about:

1. Seeing what you show up with.

2. Making the most of THAT.

It really didn’t make sense.  I have been eschewing bike miles for run miles lately, though I did do a big base build in February, and I did do a lot of bike work last summer, but that was, like, LAST SUMMER.  October – January, I rode once a week, about 20-40 miles max easy on the trainer.  I did not expect much out of such an early spring bike ride when I’ve ridden outside only ONCE since my last tri of the season.

Also, I stayed up Thursday and had a few adult bevvies, ran 5 miles on Friday in which I usually take the day before a race off, and got TERRIBLE sleep that night, also staying up too late getting things ready for the party we were hosting the night after the ride, and then waking up and not being able to get back to sleep around 4am.  I’m a baby without my sleep, and since I’ve been such a sleep monster lately, I honestly kind of wrote off the day a bit in my head when I woke up in the morning.  I did all the things though – I rolled out of bed, made some wardrobe choices, used the potty, ate half a bar and drank some purple stuff, and we were off.

Rosedale has unpredictable weather.  This year, it wasn’t so bad.  We had really bad morning fog, which held up the start a bit, but I was happy in my pearl izumi shorts, my neon jacket zipped into a vest (more for rain protection and visibility than warmth), my rainbow sleeves (they’re easier to get on and off than the jacket sleeves), and my blue rookie tech tee.  The only change I’d make to my wardrobe was my sunglasses, I couldn’t find my good ones, so I just grabbed a rando pair.  Unfortunately, they tried to slip off my face all day.

We got to the race, we did our thing, we snuck up to the 60 miler start even though we heard it was “closed because it was too full” so we didn’t start with the crush of the people on cruiser bikes.  We didn’t find our friend that we were going to ride with (she was up closer to the start line) and figured we’d catch her since we ride about the same pace.  And then… we were off. 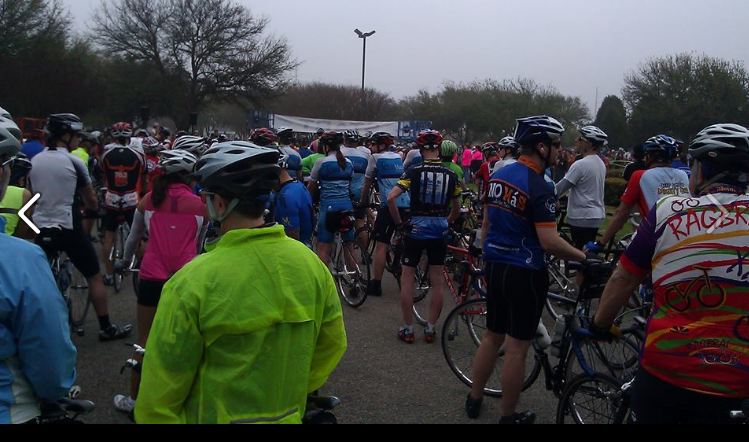 And somehow, I had bike legs.  They decided to show up.  Awesome.

Usually Zliten spends the first 5-10 miles of a long ride dragging me, and I yell at him not to go out too fast, that I need a warm up, and all sorts of other random excuses.  Today, he was trying to keep up with me.  I didn’t love the crush of the start, but it was nice taking off with people that were more our pace and the temps were pretty perfect and it wasn’t windy and somehow in the blink of an eye it was mile 10.

Here’s how a winter of serious trainer time has affected me: I’m REALLY REALLY REALLY good at the flats.  Don’t laugh.  Let me explain.  When we were on flat ground, even false flats, even flats into the wind – I flew.  Just that constant, steady, rhythmic pedaling is my jam.  Zliten could not keep up with me on those and he is typically a bit faster than me on the bike.

However, dragging my ass up significant hills was hard.  That’s what I need to work on this spring – high resistance intervals inside, and actually riding my bike outside (because in Austin, you’re going to find some hills no matter where you go).

By mile ~25 I was actually holding over 17 mph average and remembered that the last year, I got better as the course went on.  I was getting excited – I might actually be able to break my Kerrville bike split (which when I set this goal arbitrarily, I didn’t realize that I’d have to break 18 mph to do so).  Then, the wind started, and while it was nice to have some breeze, as it was getting hot and muggy, it definitely pushed the speeds down a bit. 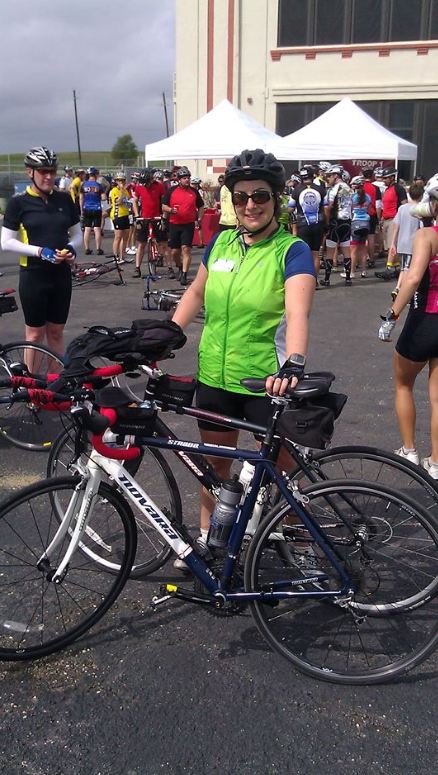 We stopped at the boy scout aide station – it has the best bike buffet with pickles, pb pretzels, cookies, mnms, etc – and pottied and examined the sheer amount of bugs on our bodies, and then got going and my legs felt like lead.  They put a pretty sizeable hill after that stop, which is kinda rude, but within another mile I was dragging Zliten again.  We agreed if I got ahead we’d meet up at the next aide station.

I biked, I stopped around 45 and waited for him, when he got there, he waved me ahead signalling he didn’t need to stop.  We stayed together for a bit, and then I got to the miles where if I’m not going my own speed, whatever that is that day, it’s like mental torture, so I just went.

That’s where Zliten had issues.  He forgot to eat for a while.  He was mentally bonking, couldn’t figure out why, and then remembered to EAT and was better.  He did get a few calories from all the BUGS though, so there was that. 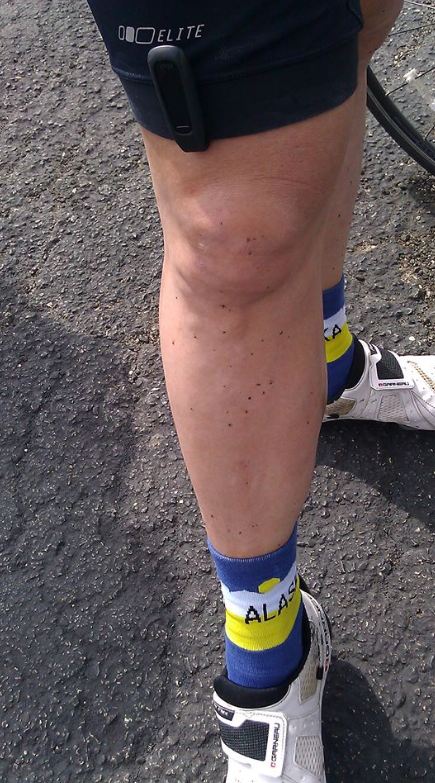 The garmin started to drag for a few miles in the early 50s, but, all of a sudden, we were almost at the main road, and I pulled over and stopped and waited for Zliten.  We always cross together (and since it’s not timed and it’s all about what the garmin says, I just stopped it).  All the people I passed – the two recumbent bike guys playing music, the girl with coach across her butt, cool jacket girl, guy I was ping ponging with… I saw them and many more.  I can’t say it didn’t feel a little weird letting people go after I worked my way up the line, but I just had to tell myself there are no rankings here.

Zliten caught up, we rode together for a bit but then I took off again once we got to the main street and ended up having to wait again right before the finish.  He got me again, we rode across together and my garmin said 3:44.  A solid 16.3 mph against winds and honestly, I still had some reserve.

We tested that reserve by going out for a run, and I happily clipped along at a 10:30 pace in my hokas feeling pretty wonderful for a pretty hilly 2 miles.  I could have gone longer, but I was hungry and wanted a beer and we were hosting a party in a few hours so we spent a few moments saying hello to our friend (we never found her during the race)and cooling down and then drove home and got on with our day. 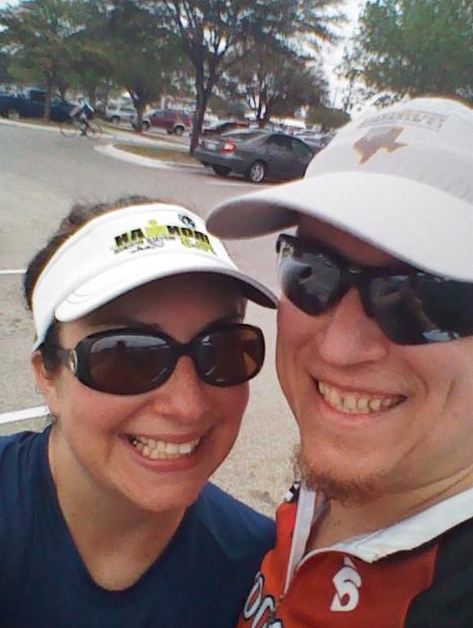 This was a really great reinforcement of my bike improvement over the last year.  The first year I did this ride it was my first 35+ bike ride ever and wanted to die at the end and finished in about 5:15.  Last year, I had really let my bike fitness go over the winter, and while I was better than the year before, I was still pretty slow at 4:29.  This year validated that biking once a week, and then one month of bike focus was plenty to get me back in tri shape, and it’s awesome to have accomplished this by March (plus a 45 minute PR is not shabby, not at all).

It’s also great validation that the trainer, when used properly, is a fine way to do the bulk of your bike training.  I know it sounds weird to most of y’all, but its just so much EASIER to ride inside than packing up the bikes, hauling them out somewhere, or worse, dealing with the crappy traffic near my area to get somewhere closer to ride.  I’ll ride outside more in the late spring/summer because it’s pretty and fun, but for now, as long as I push the intensity, I can hibernate in my living room without seeing bad results.

However, it was pretty apparent that I need to do some more high resistance work/riding the hills outside, because I used to be WAYYYY better at attacking hills than I am now.  If I could get that portion settled, I have a chance at a pretty stellar bike season this year!

(Next is vacation blog.  Promise.  Swear it!)

I’m on a boat! (Cozumel/Roatan/Belize Cruise)