I set really high A goals for myself, and I’ve taught myself to not be disappointed if I at least get in the neighborhood or put forth a reasonable effort.

Some days, you just fucking lay it out there and perform up to those high ass expectations.  Rookie day was that day. 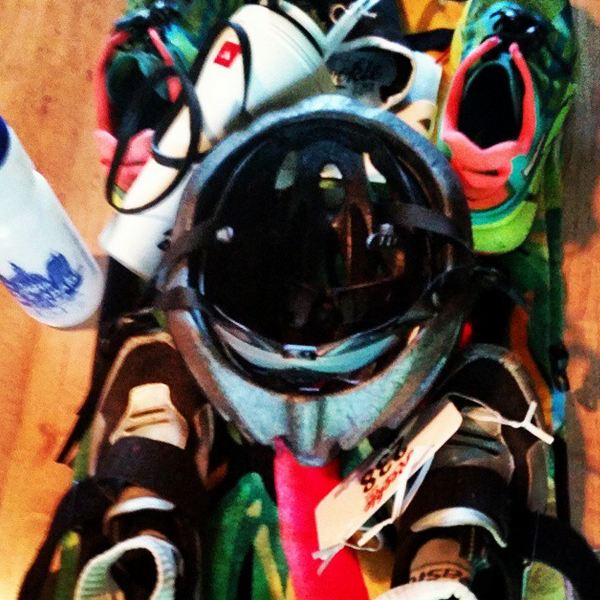 Last week honestly went according to plan for the most part, with two exceptions before the race start.

1. Zliten rolled his ankle on our warmup run (about 3/4 mile with strides) and went down.  Luckily, we were right in front of the med truck and they poked and prodded him and told him it was fine to run on, it just might be a little cranky, but he couldn’t make it worse.  Whew.

2. I cut the last porta potty trip a little close, and ended up walking an extra mile out of my way to get to the secret ones with no line.  I was worried about so much time on feet, but honestly?  The other option was standing around, and it was a nice warmup after the warmup.  The bad was I missed the swim warmup but *shrug* oh well.  Saved me from standing around wet and cold.

Soon enough I was standing around with friends, and then it was Zliten’s turn, then B’s, and then I was on double deck and all the blue caps decided to just zip in front of me so I was one of the last in my wave through the arch (less problematic in a TT start).

When you’re used to swimming more, a 300m course is absolutely adorable from the shore.  However, if you’re pacing it right, it’s plenty.  I ran down the chute as quick as I could after I got the GO! while not bruising/twisting my own ankle and dove in and got to passing girls.  And not being side swiped by breast strokers.

I was mentally prepared to be winded and continue to stay winded as I ran up the hill.  I wasn’t prepared to deal with sandals, but after getting a few stickers on my feet before the race, I think it was the right call.  I think I will always on this course.  I fumbled with my right sock for a few extra seconds but got everything done fairly expediently and made my way out quickly.

Looking at my data, there’s always room for improvement, but I’m perfectly happy with how fast I made my way through.  No gravity.  It really helped that I didn’t mentally focus on the transition as my rest point from the swim, but just another segment to the whole race.

It’s my best showing by far at this course and the only thing I can think of in the future is to push the run up the hill a little faster since I did just fine the rest of the race.

My goal was to get under 40 and I was pretty confident I could do it. Then, we drove the course the day before and holy wow, I forgot how hilly it is. Erm, yeah. Well, best you can do is your best, right?

I went into this bike ready to take no prisoners. I’ve done some tough cycling this spring and have run pretty well off it, so I decided I’d just go for it on the bike and let the chips fall where they may.

I barely looked at my garmin, I just RODE HARD. I pushed up and over the hills. I pushed the flats. I coasted a few downhills but I was breathing hard almost the whole ride. I got my gel down in the middle of the bike like planned.  I felt strong and confident and actually kind of aggressively, which is new for this scared-y biker.

The only negative of this ride is people not knowing passing rules, etiquette, and… common sense. I had one chick continually ride up along side me in the middle of the race and the first couple times, I was like, crap, I guess I’ll drop back and then found myself in chill mode to do so, so I passed her back. The last time I just went ahead and sped up again and tried to lose her. I don’t remember seeing her again.

Then, there was this older dude that was riding in the middle of everything. I had to pass him on a downhill or put on the brakes (right before the WORST hill, which would have left me with zero momentum), and after yelling ON YOUR LEFT quite a few times I ducked slightly into the other lane (not legal, but neither is obstructing a pass) and hit the rumble strip and it scared the crap out of me and I straight up swore at him. And then he rocketed past me going up quad buster.  He was probably pissed.  I don’t blame him, but sheesh.

And then it happened AGAIN the exact same way on the next downhill and I passed him on the right since there was PLENTY of space and then really cooked it to get clear of him. Not my proudest moments on the bike but man oh man, don’t ride like a fucking asshole.

I saw Joel on the run as I was rolling in on the bike and was very happy to see that he was doing well, and about a mile from the finish.  Rolled ankle be damned!

Through all the hills and the drama, I crossed the mat 9 seconds under my goal so it was all worth it. This is almost 1 mph better than my best showing on this course so I’m completely happy.

Thrilled.  I know I have more in me on the bike this year since I just picked up seriously training on the bike six weeks ago after six months off.  I’m really excited to see where my riding goes by September.

I was a little shelled from the bike but the power of the salted watermelon caff gu propelled me through.  I was keeping an eye on overall time, and I knew I was definitely in spitting distance to my goal, and the best way to do that was book it out of transition.

Yeah, buddy.  No stopping to walk or slowing down there.

I was a little worried about what I had left after ripping up that bike course but all you can do is get out there, right? I did my best not to let transition gravity affect me and just got going.

And I saw the 8s and 9s I was looking for. It wasn’t easy, by any stretch. My legs were TIRED, yo. But I’ve ran a few miles on tired legs enough times that I knew I could handle it. I just kept running as fast as I could at the “not able to talk but still kind of breathe a little” pace.

I *think* this one was a little short, my garmin clocked 1.93 (Zliten got 1.98, so maybe I just started it late) and it showed my first mile pace at 9:40.  Though I definitely sped up a lot in mile 2, I don’t think it was low 8s like I would have needed to actually get this average so I think I was actually in the low 9s.  Still.  Best showing at this tri, or any other tri, even at the slower pace, so I’ll take it.

It took 3 years to get my chip off because of the safety pin but then I found my Zliten and got sprite and chips and cheered B in and M in and went to the results tent and realized I had not only beat my goal of under 1:09:xx but also beat 1:09 with a… 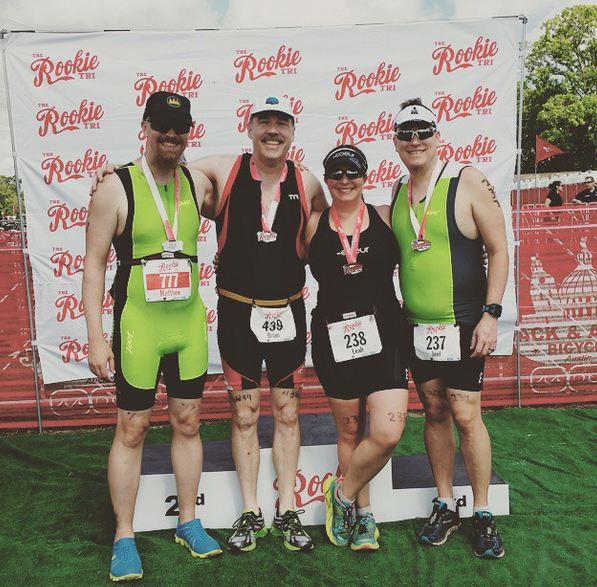 In a normal tri, I would have been top 25% of my age group, but since they split out the rookies into a separate one, I was right there in the middle (13/25). I actually would have WON my age group if I was in the rookie division by 10 seconds. I mean, this is, like, my 27th triathlon, so I have an advantage, but hey, that’s something!

My legs woke me up at 2am as if they had caught fire.  It was… unbelievable.  I’m not entirely sure I’ve ever been in that much acute pain after a race in my life.  Don’t get me wrong, I had some wicked dull ache after my first 70.3, or marathon, but holy hell, I guess I have never put so much whoop ass into under 70 minutes of racing because OW.  However, I woke up the next day, and things were relatively fine.

I feel like there’s a spark.  Some momentum.  It’s been so long since I put together a swim, bike, run, and two transitions that I have been solidly proud of without caveats.

There’s still the “how did my swimming and biking improve so much when I spent the winter running and largely ignoring them?” question and the “why did 6 months of focusing on running mean that I’m only marginally better and ranking lowest in it?” question, but perhaps that’s a mystery best left to the universe.

And, you always think later… could I have pushed more?  Not on the bike.  I fully believe that I did that up to the best of my capacity right now.  On the swim, I’m pretty sure I gave it the proper oomph.  Is it possible I lost a little focus in the middle?  Maaaaaybe, but I really think I stuck with it well.

The run is where I have question marks.  I mean, I was going fast and sucking wind, but I did lose myself behind a few people and may have been coasting a bit at some points.  Maybe I could have found another half a gear on some parts, but I did not speed up into the finish, meaning I really did lay at least most of it out there.

Overall, I believe I showed some SOLID promise for the potential to put down some major PRs this tri season.  This is the first triathlon in a while where I really feel like I got out of my own way and just did it.  At no point did I mentally pull back and stop racing hard or get down on myself or not aggressively continue to pursue the finish line.  It sounds easy on paper, but in the moment, when you’re tired and hot and not-quite-almost-there, it’s really fucking hard.