Week 6: The Destroyer of Workouts and Things

Our tri friend B had discussed wanting to do this race.  I haven’t done a relay before, and it sounded like fun, so we decided we were in.  It was a Friday night race, and we had a birthday thing to go to that night anyway, so our big training day was already set for Sunday instead of our normal Saturday.  Good timing!  And, we won a free entry, to boot!

We headed downtown and sat in traffic for an hour (grrr) but arrived with plenty of time to meet up with everyone, get situated, and get a nice long warmup (just over 1.5 miles).  My legs felt pretty sluggish, so I figured more warmup = better, since I’m used to the long slow stuff these days.

Zliten kicked off the relay by doing the first leg, and he’s our wildcard.  Depend on what kind of day he was having, it was going to be a 7 minute pace or an 11 minute pace.  Seemed like he was having a good go of it, he looked strong through the turnaround where we could see him, and came in just over 22 minutes for the 2.5 miles when he handed over the super fancy baton (an empty tube of Nuun).

Our friend M was running the second leg, and he was supposed to take it easy-ish because he was riding the Tour De Cure for the next two days (80+ miles per day), but he still made it back in just under 24 mins (and still rocked the tour… he’s awesome!).

I was third – once I got the baton, middle school track kicked in and I started sprinting until I realized that was a bad idea (2.5 miles is WAYYYYY different than 200m) and shut that shit down quickly. Once I found a pace in the 8s, I just tried to hold it.

Honestly, ever inch of this felt terrrrible, just like an effort this short should if you’re racing it right, I guess. Every moment I had no idea how long I could hold on to the pace I was doing but I just tried to stay in that moment and not worry about blowing up.

Being on the third lap, I kept getting passed by super fast runners obviously on their last, flying by me like I was walking. Can’t lie – it was a little frustrating, but I tried to use that frustration to just keep pushing.

After negotiating holding my speed and not dying on the side of the road at least until the tree, the arch, the zone 1 flag (whyyyyy was I not in zone 1?), etc, I handed off the baton to our anchor who smoked us all by 1.5 minutes.  We finished around 89 minutes with an average pace of 8:55/mile (gosh, I wish I could run 10 miles that fast myself!) and ate tacos and listed to the band. Heck yeah! 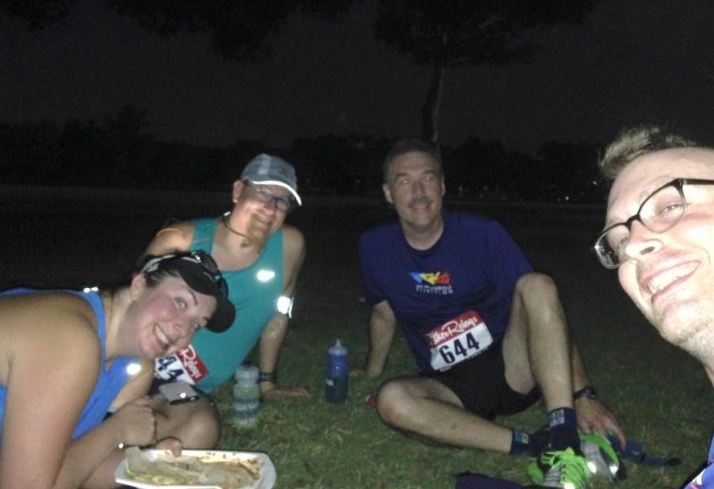 For not having done any real 5k type speed work since… June… I think I’m pretty happy with this.

Also, we got 34/70 in our division.  Top half, yay!  There were lots of fasties there, and there were some incorrect times (random low 4 min/mile pace in some relay results, which is probably not possible which means maybe we even came in higher!

Last week was the last week of volume, and volume we got.  Slightly less than week 5 at 9.5 hours, but a little more intensity, so there’s that.

Did a 3 mile race pace brick off the killer cycling class.  Reaffirmed in a hard way that even if I feel super crappy off the bike it usually ends up fine.

Had a 10 miler planned for Wednesday night, but started getting rained on around mile 2, and then started getting POURED on (we were literally running through ankle deep water at times) around mile 4.  It was SUPER fun, but lightning getting closer, dark vs no headlamps, and fear of major blisters (my shoes were SOAKED, y’all) made us call it around 8.  My soul was happy though!

Obviously, happy with my awesome 2.5 miles of speedwork at the relay.

I hadn’t yet gotten a outdoor 50 mile bike so that was Sunday’s order of business.  At first, I wasn’t into it and my stomach was upset, but a potty break and a gel, and I was right as rain and finished around 17 mph pace.  We hit the bricks (literally!) after and did a nice little 2 mile run around race pace.  Felt really sore off the bike, but the run made me feel better. 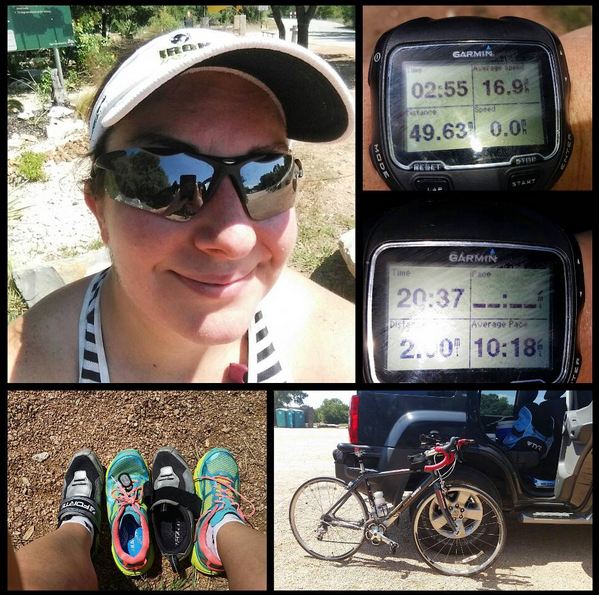 I skipped one swim, but I plan to spend a lot of time in the water this week, so I’ll let it go.  Stuck with the program for the most part (and what more can you ask for, right?), a little more intensity, more cycle heavy this week, a little less volume.

This week’s plan is to further reduce the training load (7-ish hours this week), do a few key workouts: race pace hour run off cycle class ass kicking, a self supported mini triathlon outside (gear shakeout with bursts of speed), and swim a lot more (probably at least once in my wetsuit).

I’m still in the tired/unloading fatigue stage of training where I have no idea how I’ll be feeling fresh and ready to race next weekend.  However, it seems more mental this time than physical, and if work/life would just stop stressing me out, I’ll probably come around from this pretty quick.

Here’s the stats from last week.  Wrong way, fat and carbs. 🙁  I am a little more prepared this week (slightly), so hopefully things will go better.

Since I am in taper I plan on reducing my cals/carbs SLIGHTLY but not much.  Couple hundred calories per day at most until a day or two before the race (then it’s carb time).

I spoke with my nutritionist about my concerns and he really talked me down.  He think that 1) It’s mostly water weight and 2) I’ll plateau around here and that if it’s working to make me feel fueled during workouts, to stick with it.  I took the average of the last 6 weights over 8 days, dropped the low and the high, and I’m actually 0.1 down from last week.  So, while I don’t LOVE remaining at 184-ish, it’s not the end of the world to train and fuel my body.

I will definitely keep that stuff monitored though.  If I continually creep up, or I start seeing training issues, I’ll have to take the plan and spin it sideways because I don’t want to be stuffing my face with pretzels for absolutely NO reason.  Although SOURDOUGH pretzels are pretty much amazing.

Last week was a decent return of a fruit or veggie with (nearly) every meal, and this week seems to be going well.

These two social media posts can sum up last week:

I also broke my non-prescription sunglasses on Saturday and had lost my ID (and then found it again), but I didn’t want to share that one on FB since my mom would probably yell at me (yes, I’m 36).

The #rungries are real, yo.

The completely disappointing visits to the wah pah over Labor Day weekend was redeemed by a GLORIOUS hour riding slides with barely any lines on Saturday. 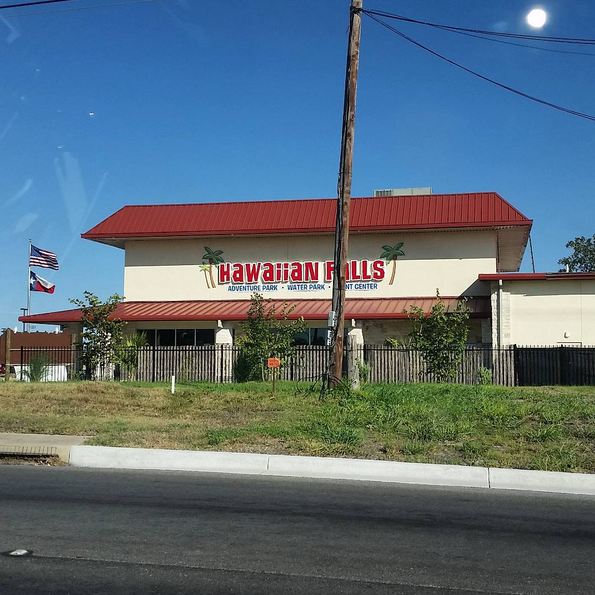 Waterpark, I love you!

I usually get stressed out about training heavy on Sunday, but I actually had a fantastic day riding bikes and running, and then spending some time outside grilling dinner, having a few beers, and reading books and enjoying a temperate day (FINALLY).  My soul felt better.  Yesterday’s stressful workday kind of canceled that out.  But hey, one peaceful day is definitely an improvement over the last few weeks!

Alright, off to conquer Tuesday things!  Question to the audience: what’s your favorite way to destress?

Week 7: Shutting it down