Week 7: Shutting it down

Week 7 is the first week where it actually feels like taper, and that’s just alright with me. 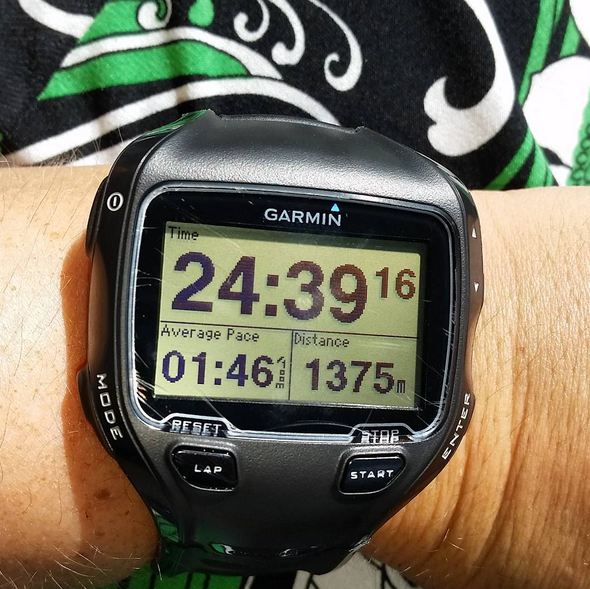 The one workout-related picture I took last week.  Enjoy!

After a pretty epic Sunday (50 mile bike, 2 mile run), we took Monday off.  I had a swim planned but Zliten begged to skip or reschedule, so that’s what happened.

Tuesday was really the last big day of this cycle.  We swam some speed at lunch (above).  Then, after work, we did a killer endurance cycle class for an hour and a half, and then immediately jumped on the treadmill for a race pace hour.  I was amazed at how it felt… easy.  Sure, there were parts where my legs got a little sore or tired, but it GOT BETTER.  The mantra “just keep running and let some time pass” was born.  Eventually, things will start feeling better OR you’ll be done!  Win win!

Thursday I had originally scheduled a double brick (aka – hard bike/run workout), but after Tuesday’s effort, I realized it was just time to shut it down instead.  I didn’t want to burn myself out.  So it was an easy 25 min trainer ride followed by a relaxed 25 min run.  It was just enough to get the endorphins going and feel great.

Friday was another day off, and Saturday’s plan was mostly a gear shakeout.

We swam two loops at the quarry.  Even with no nails, I put a few small holes in my wetsuit getting it up over my ass (thankfully, my lovely husband patched them up yesterday for me).  Just like normal, when I haven’t worn it for a while, the first half of the first lap I was thinking “OMG, I’m too big for this wetsuit, I can’t breathe in it, I forgot how to swim, this is awful” and then the second half I’m thinking “wheee, everything is awesome and I’m so buoyyyyannnntttt!!!”.  I just have to remember swimming in the wetsuit is DIFFERENT. I did jump out and take it off for the second lap – the water was low 80s which is pretty warm even WITHOUT a wetsuit – and I did what I needed (re-acclimated) in the first lap.

Then, we did an in-town bike ride.  We did this due to logistics and the nature of the ride (rather than hit up somewhere out of town), but it re-affirmed why I don’t do it often.  I didn’t have a HORRIBLE time the whole time, but with so many stops, traffic, potholes, and LANDSCAPING going on (during one part where I’d planned to do some quality riding, grrrr), you pretty much are there for the experience, not to do any sort of structured workout or effort.  I certainly wouldn’t mind doing more of this next tri season, but it would have to be in ADDITION to the two quality sessions a week we do, not in place of them.

I was pretty cranky from the ride, and it was HOOOOOT at noon (seriously, it was 86, feels like 101, and it felt all the degrees of it).  I just wanted my run OVER with.  We started out, and Zliten was all happy, which was annoying me (sorry, dear, for the things I do when I’m cranky), and talking about diving gear (which only made me think of donning the wetsuit and lugging 100 extra lbs around – making me hotter), and he wouldn’t stop with it, so I decided to run faster.  This would a) get me done faster b) make him be quiet by either running faster with me or staying back.  What happened was option B, and I just kept running faster and it felt good and caught up with him at the end.  I kept a 9:50 average pace for 3 miles in 101 degree heat.  I hope it’s MUCH cooler next weekend, but if it’s not, I’m ready for it.

I only did one dozen session, but that’s ok.  Taper.  Yeah.

6h45 min total.  A little bit less than planned but it’s all good.  Time to rest up.

This week – well, it’s race week, and due to circumstances beyond my control*, there might not be much this week.  But, if I have my way:

Even if it goes sideways and all I get to do is a little bit of paddling in pool and some easy trainer miles – I’m ready.  I just need to spend this week unloading as much fatigue as possible without getting rusty. 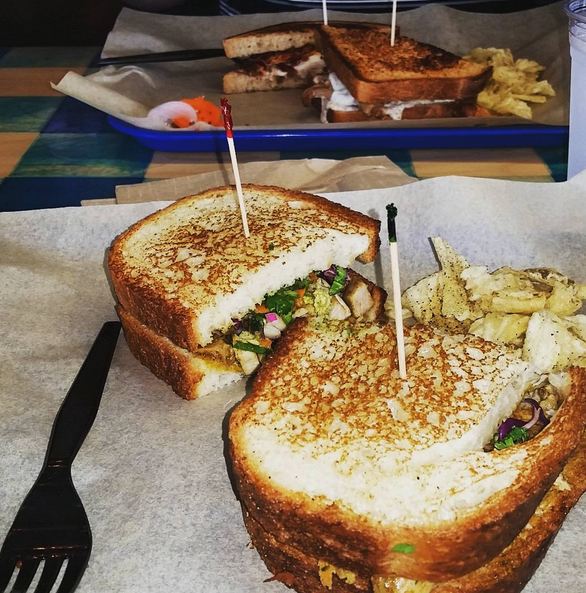 Noble Pig, post workout on Saturday.  So, so good.

My appetite definitely responded to the tapering hours.  Here’s my averages for last week.

My numbers day by day were all over the place, but averaged over a week, they seem to make sense.

Last week, we got one of those crazy wifi scales.  Sadly, it weighs me a little higher than my other scale (of course it does, they never just magically help you drop 5 lbs, right?).  On the bright side, I’m trying to use it as a fresh start – these are just numbers, not judgements.

The average for the last couple days? 185.3.  Once I get some more data I can see what direction things are going but for now it’s just numbers.  And… I did accidentally measure my body fat once under Zliten’s profile (so it thought I was a dude) and it registered me about 15% less.  Hmmm.  Not fair at all.

My goal is to keep my intake around 2100-2500 the early parts of the week, and then back up to normal the few days before the race even if it’s a little bit of work and feeling like I’m stuffing my face.  I actually have a detailed nutrition plan for Saturday and Sunday (before and during the race).  Crazy, huh?  Look at me responsbily athleting! 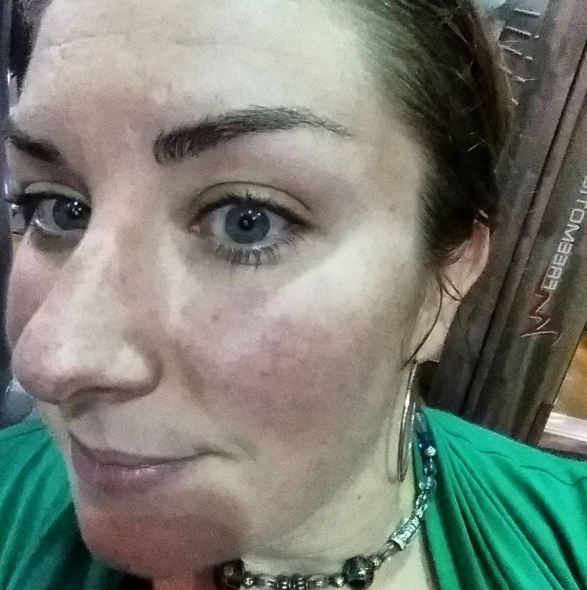 Can you just seeeeee the tireds in this photo?

Yesterday, after a very fitful and awful night of sleep Saturday night, I woke up FLATTENED.  My body was super tense, felt like I had just raced a marathon or 70.3.  I couldn’t do much more than sleep and read most of the day – I got out of bed to the couch to watch two movies and all that recliner sitting was EXHAUSTING.  Zliten made all my food, I walked less than 1000 steps all day.

Also, I was having major temperature regulation issues – I spent half the day huddling under covers in a sweatshirt and fuzzy socks shivering and the other half sweating with almost nothing on under the AC.  I sweat until my clothes were dripping last night (I removed my shirt at 1am and my pants at 5am) and if you didn’t know better, you’d think I had bladder control issues upon examining my side of the bed.  Not fun.  Hate it when my body goes whack-a-do like this.

It really threw a kink in my plans.  The laundry is just sitting there ready to be put away which I *HATE*.  The kitchen is a mess (though Zliten was nice enough to do the dishes).  Yesterday was closing day at my beloved wah pah, and was not even a question – I felt way too weak to be sad about it or question whether I should buck up and go anyway.  It wasn’t even an option in reality.

However, if there is a bright side, here it is: I spent Sunday completely relaxing and destressing.  I am working today.  I was considering not coming in, or taking a half day, but I feel pretty good and it’s low stress, but I’m not training or doing ANYTHING tonight that doesn’t involve the bed and a book.  I’ve been spending a lot of mental energy over the last few weeks both being super excited for the race and also trying to do all the things.  This was the universe warning me that I need to take a moment or three and withdraw, and center all that energy into resting up and being prepared.  Notification received.  Course corrected.

Other good news: I found my gym lock at the bottom of my bag, and though I still haven’t located my sunglasses – I’ve ordered replacements from Costco for less than 120$.  I was afraid it was going to cost WAYYY more.  Yay shitty vision insurance that covers super basic exams and that’s it.  So, the only issue I’ll need to deal with eventually is that I need new tri gear next year.  Oh no.  Tri gear shopping.  Whatever shall I do? 🙂

For now, I’ll leave it at that.  Later in the week I’ll come back and do a Kerrville Goals post, but for now, I’m focusing that energy on feeling better, healing, and resting.  If anyone wants to send good, calming, healthy thoughts my way, I’ll totally take the positive energy!

Week 6: The Destroyer of Workouts and Things