It’s been a very good (busy, but good) week.  I’ll get to the rest of what’s going on soon, but it’s time for an overdue race report. 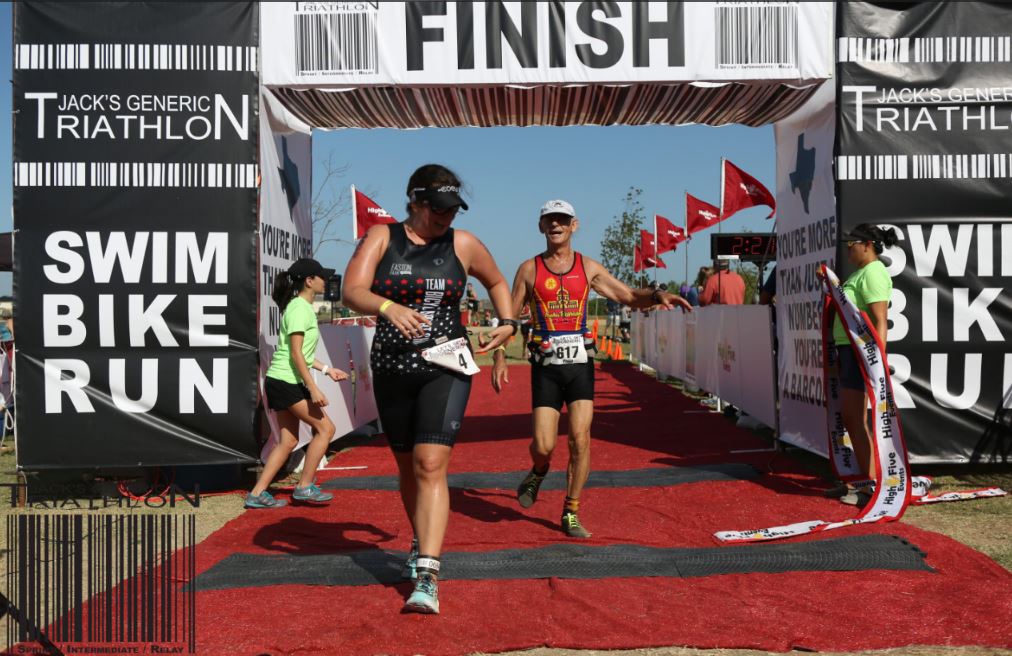 A week ago, I raced Jack’s Generic Triathlon (the sprint version).  I’ve done this the last three years.  2013 I raced the Intermediate distance and realized that a longer triathlon ending with a 6 mile run with no shade in August is not exactly my cup of tea.  So, we race the sprint version now, typically to kick off the end of offseason.  This year, I’m about 6 weeks into a very gradual build (but still a build), which means I’m going in with more fitness but also more fatigue.  What condition would win?

Turns out, the fitness.  Who knew, right?

I tried a new thing with recovery week on race week – I split it over two actual weeks (Thursday – Wednesday).  Due to life getting in the way, I ended up taking this whole week lighter, but on a normal week, I can see how it would work out better.  Physically, I think it was perfect for a B race and I’ll do it again.  Mentally, it was a little weird not having a Mon-Sun week of recovery, but I’m looking forward to giving it another go for the next B race.

The swim challenge ended up falling the day before the race, so I swam 5 easy laps (3750m) in open water less than 24 hours before toeing the line.  That’s not actually something I would have chosen to do, but I think it might have actually worked out.  Between the long swim and the few days of recovery before, I think I came to form on the right day.  Instead of being twitchy or oddly fatigued the day before, I had this nice tiredness about me that made sense, and it meant I stayed calmer than normal and actually slept really well. 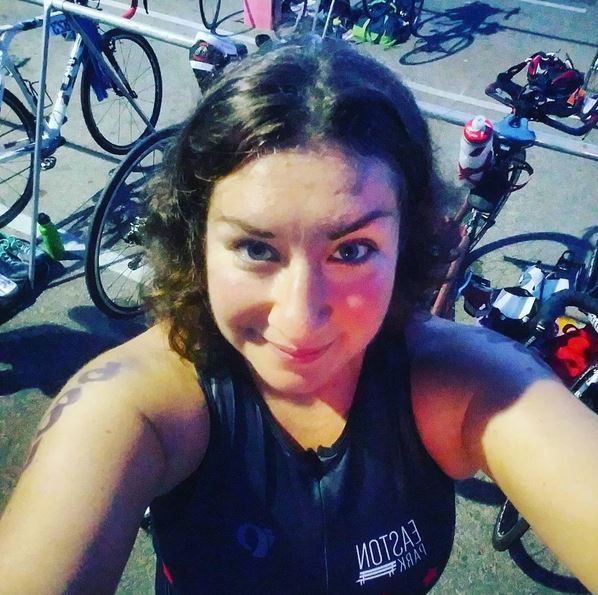 Before caffeine sleepy “why am I up so early” smile.

The morning of, I had one of those new cliff nut butter bars and it was a perfect breakfast.  Pure carbs seem to make my stomach icky in the morning, but carb + fat is the best combo.  Plus, it’s a bar, takes no preparation, and I can easily pack it for an out of town race.  Three more nutrition successes: I had a caffeinated gel about 45 minutes before the race, I brought a water bottle to continue to drink up until the race start, and I took two electrolye caps.  I think all three did good things for me.

I was in the last wave, so I had a lot of waiting around (female triathletes end up having to wait… a lot… so I’m used to it).  Finally, once it was time to go, I got *kind of* in the right position and the volunteer that was manning the time trial start told me to run like Baywatch, so I did my best impression on the way to the water.  I hope there are pictures. 🙂

The long swim the day before was either going to make this awesome, or suck.  I started out paddling my way through loose hydrilla (which thankfully they had spent the week cutting and harvesting, the swim course was REALLY NICE compared to the grabby plant monsters that normally are around in August), and just worked the swim course.

I have zero bad things to say about this swim.  I feel like I nailed the pace right away and kept my effort strong but not over the line.  I got out of the water feeling like I had done some work but not shelled.  I don’t think I got passed once and I passed a lot of people.  I clocked my best time on this course I’ve been swimming in races since 2011.  If I had to throw out a negative, I placed further down in my age group than normal, but we ended up having some fasties, so it had nothing to do with my performance.

Not much to note here, except I ended up having to race incredibly close to swim in, which is my least favorite.  And… I still beat Zliten, who was racked right in front (jerk! :D).  It was my worst T1 in years, but I don’t think I’ve ever had to rack this far back. 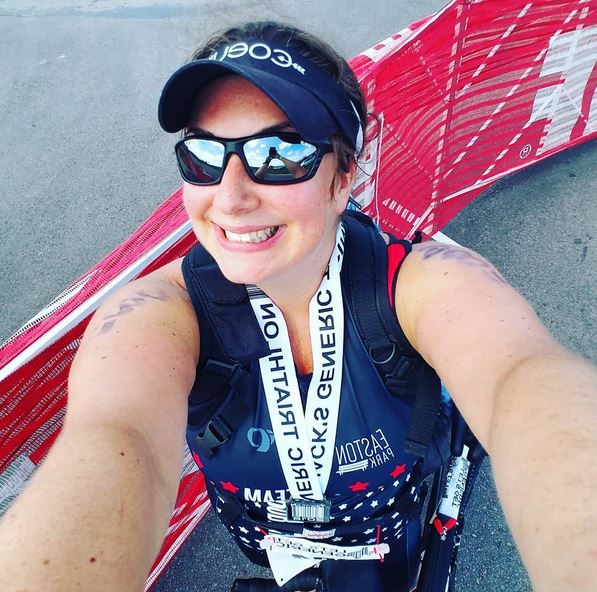 Working with the pictures I have of this race.  So you get a lot of selfies.  That’s why you’re here, right?

I’m definitely still getting used to this bike, so it’s a little awkward, but it rides like butter. Awkward butter? I mounted and got going without incident since I actually remembered to put myself in the right gear.  I pushed the effort really hard on the first half of the course and when I took a gel I checked my garmin.  I was at 20.6 mph average! RAD! Then we hit a bunch of hills into the wind and my happy little balloon deflated.

After that, I let off the gas a little because I was really ripping my legs off keeping that pace. One of these days I’ll have the confidence just to go all out on the bike and see what happens on the run.  Practice might be a good place to do that, but I’ve just never been able to simulate that high of an effort not in a race.  I almost ALWAYS run very well off the bike in training and it’s a toss up in racing. *shrug* If I had it figured out completely it wouldn’t be any fun, right?

During a portion of chipseal uphill into the wind, I was convinced my tire was flat. I actually asked the guy next to me and he told me it wasn’t. Brain ghosts. Weird. Thankful it wasn’t, but again, still getting used to the feel of the Death Star.  On the way back in, I ping ponged back and forth between some dudes and had to do a whole lot of “on your left” and probably had to double pass about 20 times and hop the yellow line at least 10 because of course crowding. #lastwaveprobs

While I have some improvements to make, I’m pretty happy with how I rode at this point in time.  I was almost going to get grumpy about not being able to hold 19 mph, let alone 20, but this is my best bike split here by far, by almost 1 mph.  Some (maybe all) of this is purchased speed. I think I’m still ok with that. The awesome thing is this stuff will be even speedier once I really learn how to ride this bike and get comfortable with the new position.

Again, nothing really to note but my terrible rack position.  My time was pretty average.  I made the choice, as I typically do in August, to run with a frozen hand held that I stored in a cooler, so that took an extra second or two to navigate.

After a pretty great swim and bike, I get onto the run course and ugghhhhh my legs.  They did not want to turn over quickly AT ALL.  I’m looking at my garmin seeing 11 minute miles, which felt like 9 minute miles.  No bueno.  I’m starting to see people pass me who I passed on the bike and I’m like… no no no no… crap… not this again.

A few dudes passed me, girls not in my age group, girls in my age group but doing the intermediate distance, and then finally, a girl with a 35 on her leg and a race number close to mine ran past.  This was my cue to go, since that was the plan.

It’s easy to say sitting in the chair in front of my computer that my goal is to try to go with anyone who passed me.  Of course you want to do that.  But in the moment, when you’re sweaty, hot, tired, sore… and then someone changes the pace on you?  Your mind fucking rebels.  But my goal was to run down third.  In my head, she was third and I told myself to remember her race number, if she came in third and I was fourth (not how it went down, but whatevs), I would remember this moment where I let it go and I’d have to face that.

I couldn’t get my legs to speed up enough yet to match her pace, but I put a big freakin’ bullseye on her back and kept her in my sights and tried to find another gear I could maintain.  I don’t really remember much of the first two miles except sticking to her like glue, reeling her in, and then finally at the last water stop, I passed her.  Decisively.  And I ran for my life for about a quarter of a mile until I realized she wasn’t trying to pass me back.

The last half mile, I was running about the same pace as a guy who was breathing about as heavy as I was.  More random race thoughts: if someone just heard our soundtrack, they would think we were having very vigorous sex.  I saw the end, found another gear to kick and pass one more person right near the finish, and I crossed the line feeling strong and happy.

Team Tri – Zliten atop the podium because he kicked some serious ass and had a 6 minute PR.

Let’s talk about outcome goals first, since this year I’m really trying to figure out how to start placing in my age group (or at least finishing closer to the top).  Cycling really pays off.  You wouldn’t normally put together an 8th, a 4th, and a 12th and get a 6th… unless that 4th is on the bike.  I beat girlfriend that I passed on the run by over 2 minutes.  I needed 1.5 minutes (which would have been possible, if I had a real banner day) to move into 5th.  I needed 5 more minutes to move into 4th and almost 8 more to move into 3rd.  I don’t have that yet – but considering my first Jack’s Generic Sprint was 1:40-something, it’s not to say I can’t keep improving and get there.  But on August 7th 2016, ranking almost top 20% of my age group, top 15% of my gender, and alllllmost top 33% overall is a pretty good place to start to trying to chase down a podium.

In terms of process – I swam better than expected, faltered a little on the end of the bike but still did pretty well, and took some rough feeling legs through a fairly strong run for me, especially at this point in training, and my transitions were solid.

You can’t ask for much more six weeks away from a long offseason.  I now have six solid weeks of training ahead of me, wherein the weather should transition at some point from scortching to almost pleasant, before my next race.  It’s an Olympic.  The times from last year are pretty fast, so I don’t love my chances at getting on the podium, but after seeing how it affected both the outcome of my run and my self talk during it, I think I’ll continue with the goal to run down third even if I’m actually running down, like, eighth. 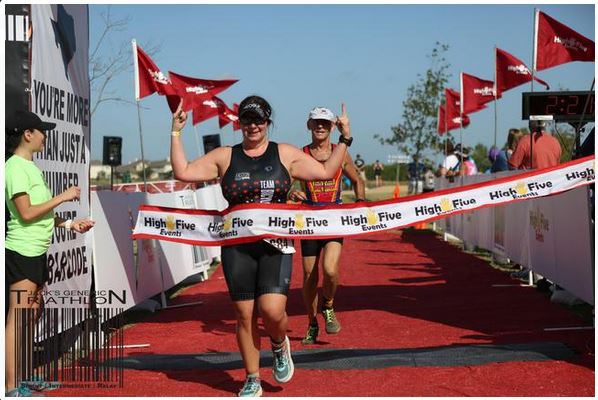 Also, can we talk about how I look slightly less ridiculous in wet spandex at this point in time?  I’ve still got some work to do, but this picture summarizes how I feel about progress.

Rolling heads and the finite amount of give-a-shit.