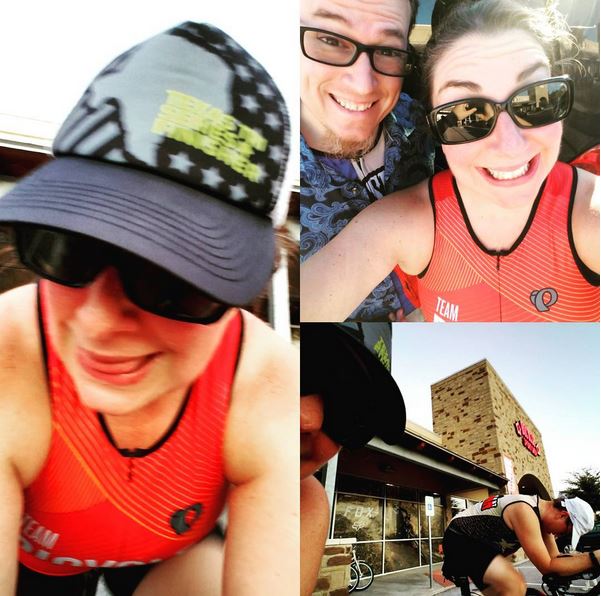 Sometimes that shit is riding my trainer outside the bike store with my teammates blaring music at all the restaurants nearby.  The obnoxious tomatoes ftw!

Goals are, like, my drugs (or anti-drug? or maybe we could with a far more appropriate analogy and say I live for them? …nah).  I love to make them, I love to plan them out, I love to conquer them, and I love to say, “what’s next?”.

I spent the first four months of the year plugging away at a single goal called Ironman.  Then, after a little bit of recovery, I took the blinders off and have been plugging away at a million smaller goals.  Century ride, check!  Getting faster at running short distances and fixing my running form?  Kinda check.  Writing a book?  Getting to the halfway point.  Four usable bedrooms, check!  Twenty million other things I typically ignore during training for a big event?  Either check, in progress, or on the plan.

While I’ll have some days where I feel a little overwhelmed, normally I’m super excited to be progressing towards things I want to do. And then, like late last week, my brain and body pretty much decided that it was time for a complete stop in the way of some MAJOR lack of mojo and heel pain that wasn’t just a twinge.

I committed to waiting until my heel is pain free for 3 days until I run on it.  Even today I’m not quite there yet (close but no cigar), but I think that means the earliest will be next Monday IF I have no twinges this weekend.  I am so frustrated that I’ll be getting a late start preparing for 3M but I’m going to trust that these things happen for a reason.

I had an unplanned day off on Monday and I wanted to do all the things and it was gorgeous outside so I should have ridden my bike everywhere.  Except, I slept until 11 (over 12 hours of sleep).  I read my book in bed and dithered around the house and finished writing a chapter in my book and couldn’t muster any sort of give-a-shit so I rode the trainer while reading more of ROAR (which I have since finished and highly recommend to anyone who is not just a tiny man).  I haven’t done a weights session since early last week.  I haven’t made it to the pool.  I might ride the trainer again sometime this week but it’s also just as likely I’ll sleep in instead.

I feel like I’m letting precious time and beautiful weather slip through my hands.  I feel like I’m in the worst shape of my life for this season (because I’m usually in the best shape right about now).  You’d think I’d feel rested after riding my bike twice in a week and getting lots of sleep but I’ve felt like a frickin’ zombie all day so of course that makes me reconsider resting to begin with and maybe I should just suck it up and muddle through…

“No,” the universe says.  “Hard. Stop.”  It’s not screaming yet, but it’s also not whispering.  And using it’s stern voice.

I hear you, universe.  No need to yell.  I’ll give you a little more time.

Almost 30 hours total.  Even though I feel like I haven’t done much, the numbers don’t lie that it’s 1 hour a day average.  I deserve a little break.

Priority is: 1) healing then running 2) weights 3) cycling 4) swimming (sorry swimming, you’ve been last on the list for a while).  If I can only get to the first part of #1 and #2 in this month, I’ll be a little disappointed, but OK. 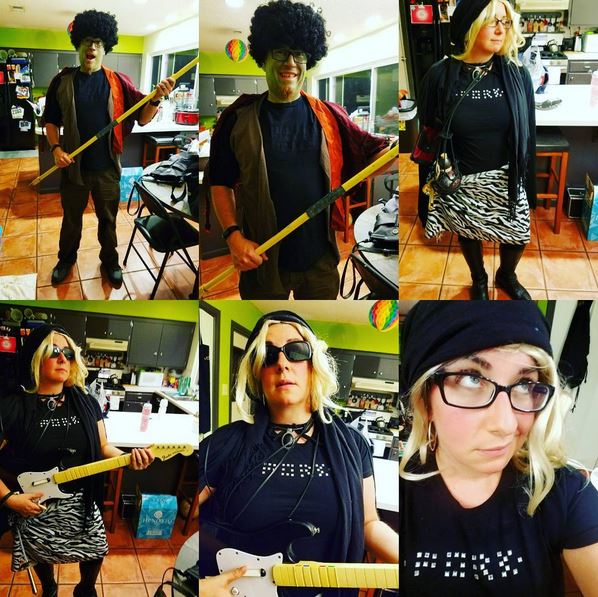 I have paid so much attention to this week’s food, the most related picture I have is our D&D costumes.  I mean, my name technically is FORK, but…

Here’s another place where the not-quite-end-of-year-but-close burnout hit me.  But I think it’s working out alright.  I’m actually making some real progress here and it’s encouraging.

I stopped tracking my food around October 22nd and haven’t really restarted yet.  Because of that, it’s just about impossible for me to guess what my overall stats were for October.  However, I didn’t stop weighing at least.

So, I’m looking at 185.3 as my average for the month of October, which is -2.1 lbs from my average last month.  My clothes are fitting better and I was literally walking around yesterday in my underwear asking my husband if he thought the elastic went out (and no, I’ve just lost some belly fat, since my others fit the same way).  The good news is it’s continuing to drop… right now is that lovely wonderful TOM and I’m still averaging less than I was last week.  Momentum is on my side, finally.  Just in time for the holidays.

How do I stay sane and not eff things up and gain 7 lbs like I did last year?

Simplify tracking – only the bad stuff.  I am going to have a hard time tracking calories and diet quality next month with camping and a launch and a remodel and all sorts of other shenanigans going on.  I was trying to figure out how I can still keep myself on the wagon but also not stress myself out and I think I’ve figured it out: only track my negative diet quality points/calories.

If you think about it, it’s actually perfect.  Hopefully, my laziness will take over and if I realize I have to track the fun size snickers and I don’t have to do anything if I eat the apple, I’ll go the way of less resistance.  I’m good at eating the good things.  The meals I cook are all roughly similar amounts of calories.  I’m actually pretty decent at eating the right amount if I eat mostly the good things.  So, hopefully, this will be a low stress way of making sure I stay on track.

They are holi-DAYS not holi-MONTHS.  On Halloween I had 2 ciders and ate a few fun size pieces of candy.  I still have a handful of heath bars left over which I’ll dole out to myself as treats throughout the year.  Thanksgiving is delicious, but I’m not a leftovers gal, so that one is really just about that day for me as long as I don’t bring home half a pie or anything (and if I do, it goes directly in the freezer in bite size portions).  Christmas is a little trickier because we celebrate both Eve (neighbors, ourselves) and Day (family) with food-heavy traditions, but again, it’s two DAYS.

So, in November, I’m committing to these two things: 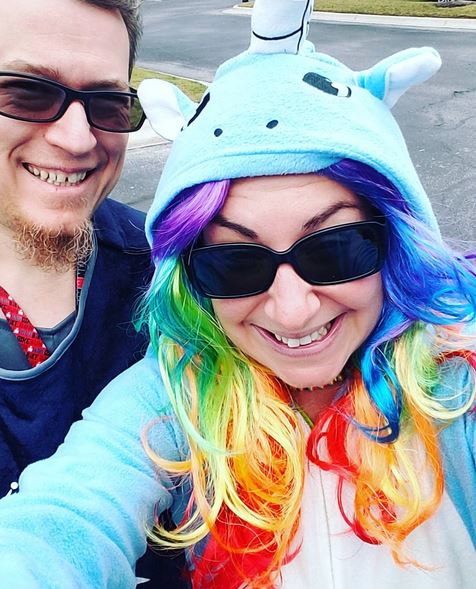 I’ve been told to be myself unless I could be a unicorn, so for Halloween proper, I was BOTH!

Summary – things got done.  Not all of them.  I probably need to narrow my focus a little bit going forward or I’m in danger of getting overwhelmed of OMG ALL THE TO DOs.

In November, pretty much the primary focus will be on the kitchen remodel.

Pack up the kitchen between now and November 13.  The goal is to do one box per day.  That should give us more than enough time without getting us overwhelmed and give us the opportunity to go through what we have and get rid of some stuff instead of shoving shit in boxes willy nilly.

Get the cabinets Nov 11.  We plan to rent a trailer and then our cabinets will live in the garage until they are ready to go in the house.

Figure out the counters.  We bought slabs of granite and have since reconsidered being so cheap about it because our counter shape is pretty custom and we’ll already be saving an insane amount of money doing the rest ourselves so we’ll splurge on having someone do the counters.  We have one estimate for about 3 grand, I want to price a few others to see if that’s reasonable.

Figure out the cabinet colors.  These came unfinished, so it’s actually up to us to pick out exactly what we want.  I really liked the ones we got the estimate for, so I’ll probably try to find the slightly off white for the top, and a dark grey/almost black for the bottom (but I also want to nail down the countertop color before we buy them).

Pick out the backsplash and decide if I want to change the wall color.  I love my apple green kitchen walls but I keep thinking about possibly going red, or turquoise.  Even if we stay with the same color, I definitely want to repaint since it’s been 10 years.  Then… we’ll decide what backsplash would go with or if we even have enough place to put a backsplash where it will be worth it.

Purchase an above-the-stove microwave.  I am so ready to have a microwave that doesn’t take 20 minutes to cook something frozen, but we didn’t want to buy a new one until we remodeled.  So, so, so soon.

Look at the actual remodel process like a race.  It’s messy, it’s uncomfortable, I’m going to get cranky about stuff, but the finish line is worth it.  And, we have some pretty awesome and experienced people on our team (Zliten’s parents).

Write book.  I think I can commit to two more chapters OR one chapter and finishing the chapter I started and didn’t finish.  I think it’s probably time to start at the beginning with chapter 1, but whatever I’m motivated to write at the time I sit down will totally work.

Camping!  Heading out to the woods this weekend with some friends.  Of course, we picked a weekend in November as they’re not really warm weather people… and the highs are looking like upper 80s.  D’oh!

Comedy.  If we can make it out, we have SEVEN admit-2 comedy tickets left that expire at the end of the year.  To be fair, some of the shows we’ve seen have not allowed us to use the discount passes, but we should probably try to use some of them (and drag along some friends).

…and that’s a wrap.  Time to go eat healthy food and be productive to start out the month on the right note!