After what I had just done, and what I was to do the next day, I knew I needed some massive food.  My goal was to redo my pre-race meal plan with a turkey sandwich for lunch, and considering I was already in the hole, it needed to be epic.  The Butcher and the Brewer did not disappoint.  It is one, if not THE best sandwich I’ve ever eaten (top left corner). 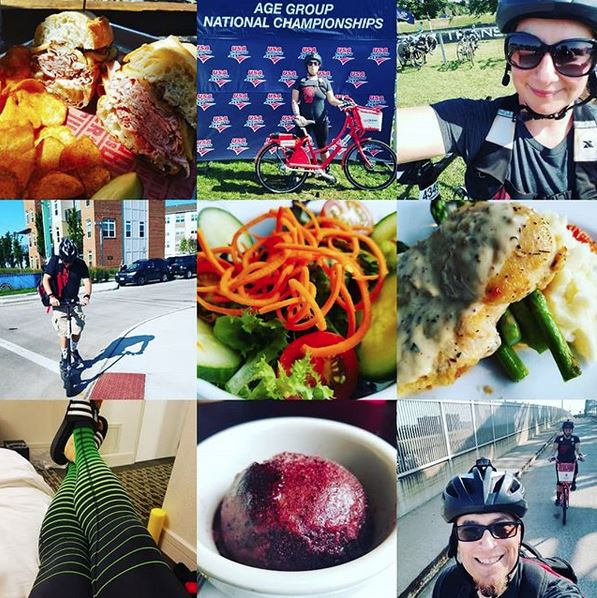 After lunch, I finally got cleaned up with the most painful bath/shower.  Humidity + my gear not really fitting right because of weight loss = SO MUCH CHAFING.  Ow.  Then, we had a glorious little nap before we had to wake up and do the whole commute to the race thing all over again.

Zliten rode the tri bike, I rode a bike share bike, and he dropped off his steed.  I then rode my ride share bike up to the closest place I could rack it (1 mile away) while he walked there, and then we walked a mile to where there were two bike share bikes, and rode those the two miles back to the hotel.  I had 33k steps that day, and the entirety of my running race was approximately 12k.  It was not exactly super restful!  Good thing I walk A LOT.

We had 15% off at the hotel restaurant, and it sounded like the easy option, so we dined there.  It was actually really, really great and stood on it’s own even without the convenience sake!  We started with salads, and they had super yummy homemade dressings, and then a chicken, mashed potato, asparagus main course with this delicious dijon sauce.  We split some blackberry wine sorbet for dessert that was drool-worthy as well!  It’s actually kind of fun to eat back all those calories versus indulging in post race beers… though I probably won’t make a habit of it.  I really like post race drinks!

I slept a little better that night, even though I think the next night’s wedding DJ was EVEN LOUDER, but still I woke up dragging ass.  I figured it was due to racing the day before, two bad nights of sleep, so I just did all the things I did the day before as if by rote.  The shuttle was just as convenient and we got set up and started to walk down to the water, and then an announcement came through about 10 minutes before the first wave started: the swim had been cancelled due to unsafe currents.

Well, considering my experience the day before was considered SAFE, I was JUST FINE with them cancelling the swim.  However, they decided to make the format a run-bike-run situation, and if there’s something I don’t like lately, it’s running fast (or at all, really) without a bike ride first.  I was happy that today was simply for funsies, and I stayed loose while lining up with my wave of ladies.  We were sent off in groups of 4 per “karate chop”, as they called it. 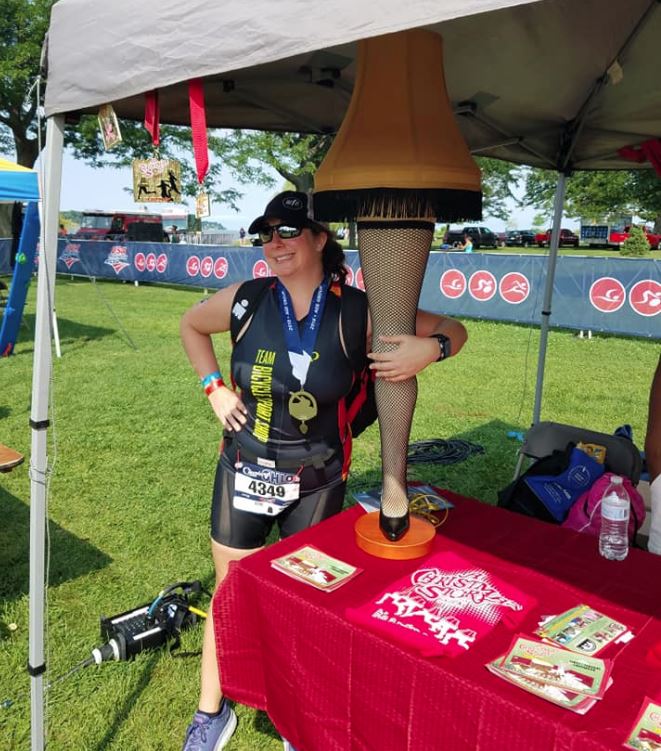 Just hangin’ out with the leg lamp.  As you do.

I poisitoned myself in the back for various reasons, and it went exactly how I expected it to go… everyone ran out at “sprint to the finish” pace because everyone else next to them was doing the same thing, leaving me in the dust going about 8:45-9 minute miles (which was probably too fast for me anyway, but still felt like I was running through sand compared to everyone else). Then, we hit the first big hill and I passed a bunch of people who did not expect to go up quite so quickly.  I started feeling awful but I figured it was just sprinting upwards faster than I should have and I just tried to run through the terribleness.

But the terribleness didn’t go away like normal.  On that stupid hill of the first run of a sprint duathlon, I got lady cramps that went from zero to 11 in about 2 minutes.  Looking back, Zliten said it makes sense because I was really out of it that morning, but I just figured travel, lack of sleep/rest, and racing two days in a row.  I tried to keep under 10 minute miles, then just tried to keep running, then found a bathroom at 1.2 miles and crashed there.  I couldn’t stop sweating and shaking and just sat hunched over trying to either cry or puke or do SOMETHING to expel the demon from my body.  I had stopped my watch at that point because I was just DONE.

My garmin says I sat there for a little over 6 minutes, but it felt like an eternity.  While I didn’t actually HURL, it was the exact same feeling and situation as this fateful turkey trot.  Just as it passed last time, after a while, I found the ability to at least stand up and take some steps forward.  I was at least going to make it back to transition on my own accord, even if just to hand in the chip.

Once I got out into the fresh air I felt a little better, and I walked a little faster.  And then I tried jogging.  Then, before I knew it, I was back at a steady, if conservative, run clip and I figured it couldn’t hurt to try to ride the 12-ish miles, even if it was slow.

Note: I’m actually going to skip transitions on this one since I don’t have a record and they don’t either.  My finish time includes about 6 minutes unaccounted for by run/bike/run time, and about 3 minutes each seems reasonable to me considering the size of the transition and the state I was in. 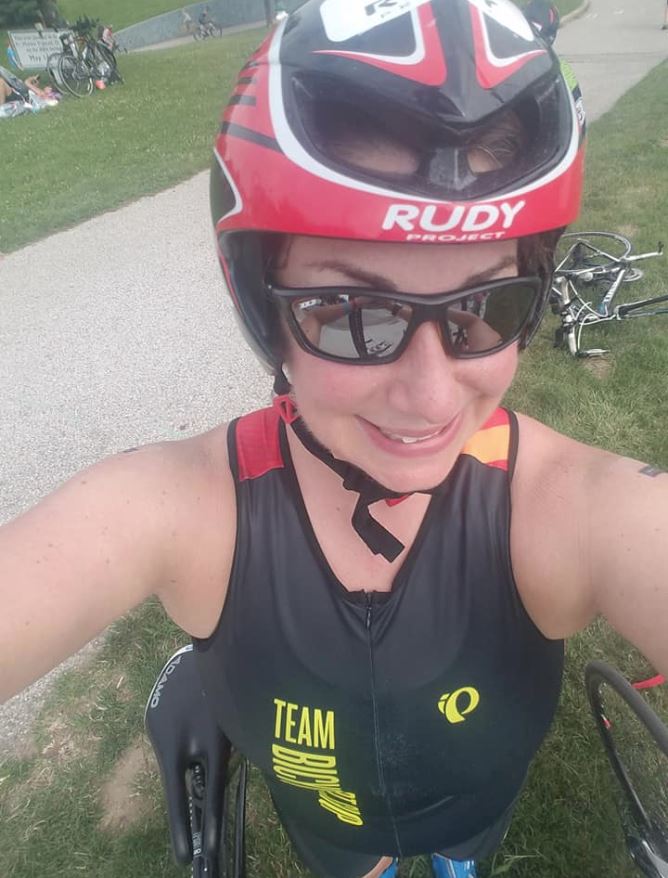 I got out, got going, and noted that I felt OKAY, so I got a gel down (I know caffeine is a bit of a painkiller and I didn’t have anything stronger on me…) and got to working.  I had too much chafing to put my heart rate monitor on that morning, so I don’t have any of that data to work with, but I do have power and I averaged 5 more watts THIS day vs the day before (9 more normalized), so I didn’t completely soft pedal, but I would definitely say it’s one of the more conservative sprint rides I’ve done this year.

On the way out, the same headwind plagued us, but I was ready for it.  On the way to the turnaround, I started seeing ladies that looked like they might be in my age group, so at the turn around I went hunting.  I caught 7 people from my wave, 2 of them from my age group.  It was fun racing a similar bike course two days in a row!  I didn’t love some parts of the freeway we rode on, but all in all, it was a pretty great course.

Also, my husband is a rockstar ninja cyclist.  I didn’t see any of this happen, but a woman passed him very aggressively about half a mile to the finish, and then as she flew down the hill, she wrecked her bike by overcorrecting a turn.  She flew off her bike and it skidded across the road.  It actually hit Zliten in the leg and then on his bike frame but he leaned into it and stayed upright.  He actually ran over her skidding bike tire and continued on to the finish without wrecking.

My bike wasn’t so eventful, however, I didn’t have any debilitating cramps and rolled into transition like I might actually finish this race.

I got back out on the run course and at this point, my goal is just to flipping finish.  When I started on the course the second time, the 60+ year old men were getting their “karate chops” to start the first leg of their race, and some of them just FLEW by me.  I jogged up the first hill very very conservatively and the demon cramps did not appear, so I increased my pace a little.  I worked on hunting people down but I kept the effort to something like a 10k-half marathon paced run versus what I’d normally try to run the closing 2 miles of a sprint triathlon.

I flew down the last hill for the fourth time in 24 hours and crossed the finish line. 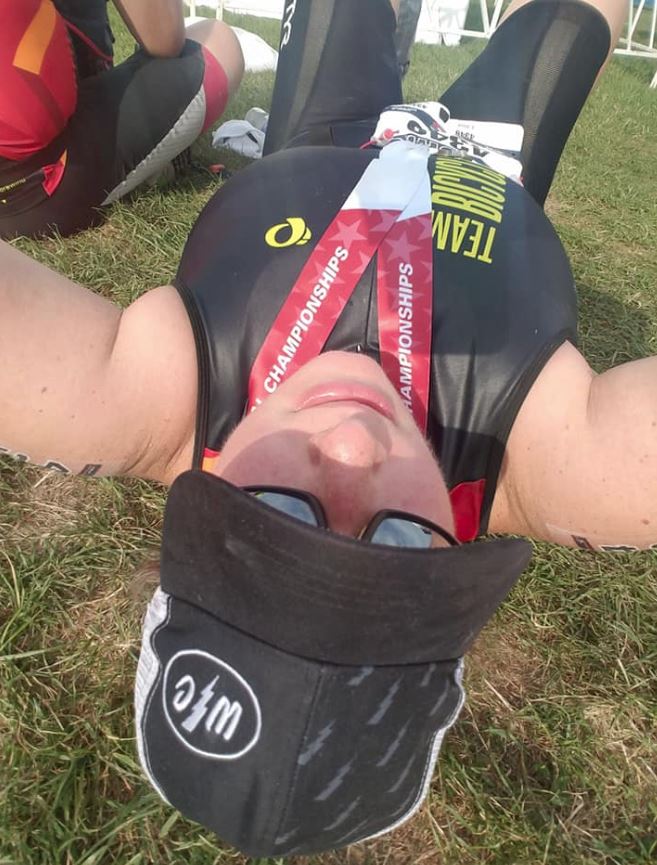 If I was able to match Zliten’s time of 1:11 (and we’re usually fairly even so I imagine I would have been close if not a little behind due to fatigue), I would have hit approximately mid-pack for my age group, which I would have been stoked about.  In this case, I was just extremely grateful for my patience to wait until the cramps passed, and my wisdom to not overdo it to try to make up time (or conversely, give up) and have a decent performance when I wasn’t in a bathroom, hoping to die.

After the race we hung out with friends (and I sat two chairs away from THE SISTER MADONNA BUDER at the food tent and was too out of it to realize until later), and puttered around until they let us grab our bikes.  We made the final commute back (four round trips in three days…) to the hotel, with a parade full of people riding on tri bikes.  We got cleaned up and then we spent the next day and a half playing and sightseeing and eating reprehensible bar food in Downtown Cleveland! 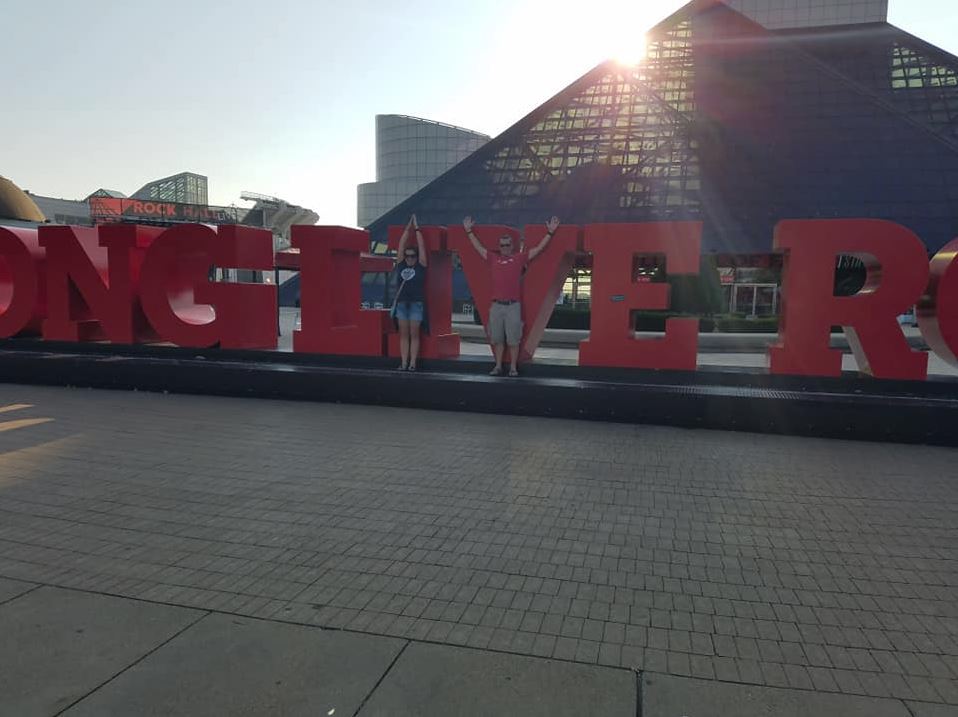 We actually even went INSIDE the Rock and Roll hall of fame the next day!

I had a super fun time, and glad that this was just a “for fun” race – the travel delays and the sheer amount of non-race related activity would have frustrated me otherwise, but it was a fantastic training weekend (and practice run) for Cozumel.

The same race is there again next year.  The deal is, if Zliten qualifies, we go!  I have to say I would NOT be disappointed to go back.  The cool temperatures, the fun downtown area, the neat hotel we stayed at, and the AMAZING food definitely made me indeed think, “Cleveland rocks!”.